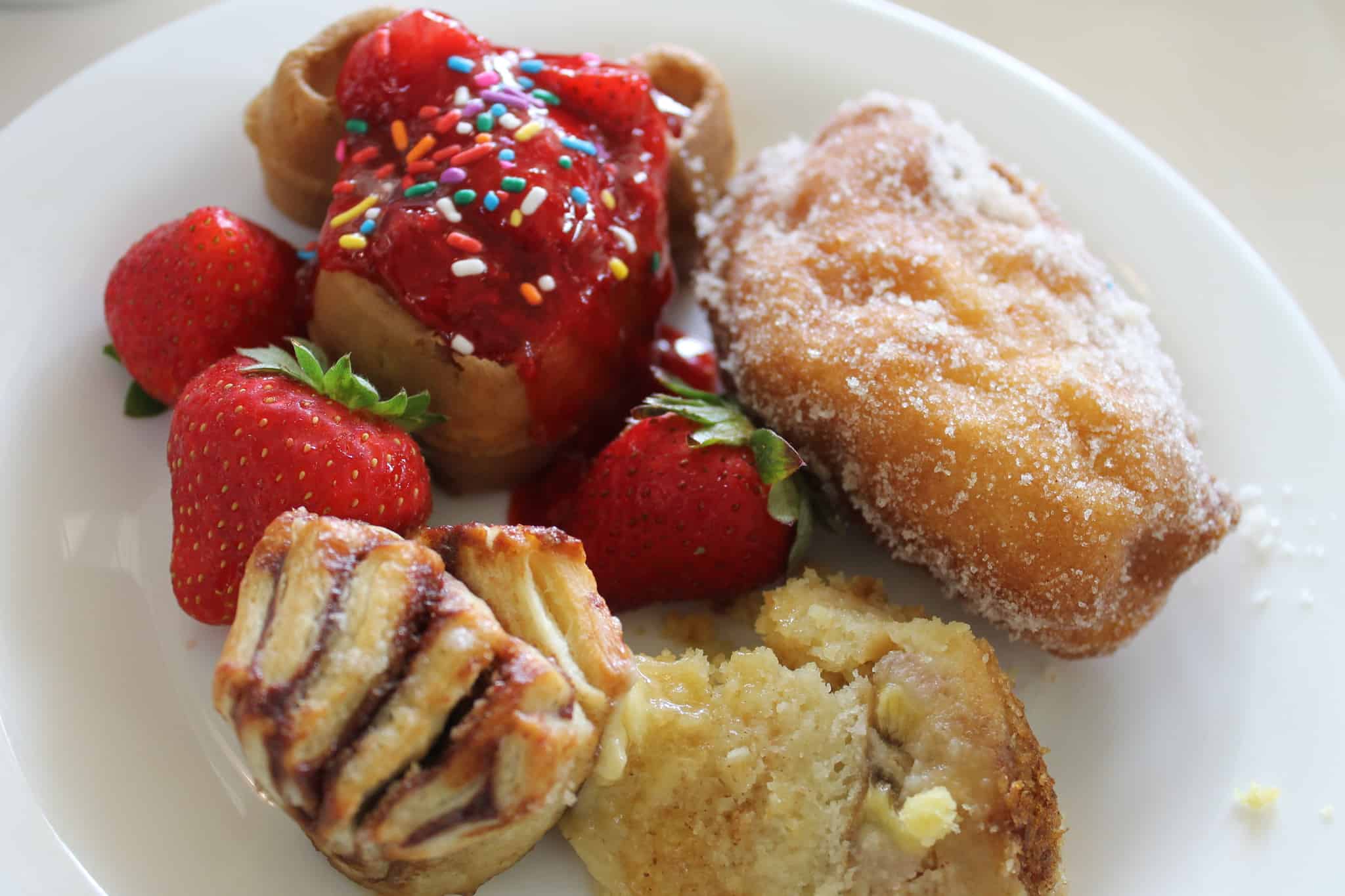 REVIEW: Breakfast and Dinner at Crystal Palace in the Magic Kingdom, There’s Some Surprising Sparkle

This past weekend, we stopped by Crystal Palace for “brunch”. We decided this for two reasons: nobody in our group has gone in well over 10 years, and we wanted to confirm a theory on breakfast/lunch turnover. With a reservation around the 10:30-45AM time frame we were guaranteed plenty of breakfast, but also the possibility of sampling some lunch items. Fortunately this worked, and we weren’t the only ones in the restaurant who ‘double-dipped’. The unfortunate part is that the breakfast items blow away everything at lunch.

Crystal Palace is split into two dining areas with a buffet spread in the middle. Four of the Winnie The Pooh characters (Pooh, Tigger, Eeyore, and Piglet) walk around to interact with tables allowing ample time for pictures, autographs, and shenanigans (such as a celebratory parade guests can join in every so often, marching around the restaurant).

The interior of the restaurant, including restrooms, remains largely untouched from the early days of the Magic Kingdom. This adds a lost elegance and timelessness to the entire establishment that makes it feel *almost* Disneyland-esque. It’s refreshing, for sure.

Let’s do a run-down of the buffet line for breakfast.

On ‘Pooh’s Corner’ you have the traditional Mickey Waffles and Winnie the Pooh’s Puffed French Toast. The puffed french toast was recommended to us by our server and it was instantly one of our favorite breakfast items anywhere at Walt Disney World. Go for a light brown piece that’s nice and soft and sugary. While the item resembles elephant ears from your local carnival, it’s a much higher quality.

Honey and strawberry yogurt choices for the available granola, along with some hard boiled eggs and cream cheese for bagels.

Pastrami, Smoked Salmon with Capers, Red Onion, and Tomato. Take note the salmon is separate from the tomatoes and onions, it would work great on the bread products available. Although the salmon was very peppery, there was a great smoked flavor to it.

Cheddar cheese cubes on the left, ambrosia salad in the front, plates of fruit salad and strawberries and pineapple as well. Everything was relatively fresh and didn’t have the ‘it’s been sitting on the buffet line for an hour’ feel.

A wiped-out pan of the potato casserole (which was REALLY cheesy, and popular) as well as breakfast potatoes, biscuits and sausage gravy down a bit further.

Listed as ‘Western Breakfast Pizza’ mainly due to the abundance of green peppers on it.

Smoked sausage with onions, a large plate of very healthy bacon, and a the basic Disney breakfast sausage. All of these meats were well cooked, the smoked sausage had a wonderful smokey flavor that wasn’t overpowered by the onions.

Although there’s a made-to-order omelette station, two popular ones were readily available: Steak omelet and just plain scrambled eggs. We opted to have one freshly made because hey, why not?

A horrible picture of basic grits and pancakes. We expected a cheese grits or something else besides just regular grits, but alas.

A warm vat of syrup and toppings for pancakes and the made-to-order omelettes. There’s a large bowl of fresh pico de gallo in the middle there, it goes great with the steak omelette.

There’s a few cereals available as well, if the other fresh items aren’t pulling you.

A rather large assortment of bread products: White and wheat bread, multigrain & regular croissants, and a cheese danish. Oh, and sprinkles are available because…

ICE CREAM FOR BREAKFAST! Seriously. Ice cream, for breakfast. We’re not saying every day is an ice cream for breakfast day, but when you’re at the Magic Kingdom…

More “traditional” choices include plain bagels and then two of the other best items on the buffet. The cinnamon pull-a-parts are one part monkey bread, one part cinnamon bun, and all parts awesome. They’re the perfect sticky pastry, you’re going to want two or five. On the right you see the ‘Breakfast Lasagna’. This bad boy is described as Layers of Waffles, Pancakes, and Pound Cake topped with Pastry Cream and Caramelized Sugar. It sounds like a heaping mess, and it is, but that doesn’t detract from how great the breakfast lasagna is. It’s a unique and playful item that Crystal Palace is proud to present.

Overall breakfast was unexpectedly spectacular, absolutely worth the visit. Lunch was a little different of a story, let’s dig in…

The most important part: Kid’s Table

Chicken nuggets, mac and cheese, corn and peas, and chicken drums. Make yourself an 8 piece nugget and reminisce to the days when there wasn’t a choice between a 6 and an 10 piece nugget at Cosmic Ray’s.

Mixed greens and a Caesar salad you can make yourself.

A large variety of cold salads were available, and honestly each was unique and most were great. There’s a Mediterranean Pasta Salad, Moroccan Couscous Salad, Edamame Salad, Greek Style Tomato Salad, Roasted Beet Salad, Cucumber Salad, and a Mixed Fruit Salad. We recommend the edamame, it was crisp and fresh in all the right ways.

Carrots and apples finish off the vegetables and fruit portion. There were plenty of tasty chilled shrimp available. Honestly, most times buffet shrimp are rather slimy and bland. These were cooked and seasoned well before being cooled down, resulting in a great crisp bite.

Creamy mashed potatoes were in fact creamy. Skip the roasted corn spoonbread. Understandably we expected a cornbread alternative, but it tasted like someone literally tried to make corn in bread.

Green beans with onions and steamed white rice. The green beans were crisp with each bite and a nice warm side.

The Banger Sausage & Collards was pretty decent, at least the bangers were cooked well. The rotisserie chicken left a lot to be desired unfortunately, even with them being freshly cooked nearby we couldn’t shake that these were cooked hours ago and have been waiting in a warmer.

The honey glazed carrots weren’t anything spectacular, but fit the Winnie the Pooh theme well. The jambalaya looked promising. Our server said the item is relatively new, added a few months ago. Unfortunately the dish was half green peppers with minimal protein. We were told there should be sausage, chicken and shrimp in the mixture from our server, we agreed that’s typically how jambalaya is made… but we found pieces of bacon mixed-in. He spoke with a chef who informed him ‘This is how Crystal Palace makes jambalaya’. We don’t know why the chefs here didn’t just call over to Disneyland and discuss jambalaya recipes, it seems like a very easy thing to copy across coasts.

The potato and cheese pierogies were quite good.

On the left there is brussels & root vegetables with bacon. Ultimately forgettable. The pasta dish is a vegan basil pesto pasta that was pretty decent. It’s one vegan option that didn’t ‘feel’ vegan.

Herb-crusted tilapia and honey soy-glazed salmon. The tilapia was done perfectly and had a nice crunchy exterior. The salmon’s glaze left a lot to be desired, but the fish was cooked well.

There was a house made beef, barley, & mushroom soup available. This was another really solid item that was spectacular. If it’s not 100 degrees outside the soup seems like a good option.

Roasted striploin of beef. They offered us horseradish whip on the side, which was more creamy than spicy. We recommend getting it on the side, not right on the meat.

The roasted turkey was dry, chewy, and difficult to eat. A huge upset as compared to the beef.

No, your eyes don’t deceive you.

The other side of the desserts spread is massive.

We were also told the Blueberry Mousse Dome Cake was meant to be Eeyore’s dessert and the Red Velvet Cupcake was colored like Piglet. Rounding out the desserts is a NSA (no sugar added) Strawberry Basil Panna Cotta, a chocolate chip cookie, a s’mores tart, and a the warm toffee brownie in the middle (which was our personal favorite). Each was pretty good, but the stand out was the panna cotta. A subtly sweet and perfectly executed dessert.

Crystal Palace remains one of the most popular character dining locations on property. After experiencing both breakfast and lunch this week, we can safely say that breakfast should be a priority if you would enjoy visiting. That being said, doing both with a later reservation probably still isn’t a bad idea just for the dessert spread and maybe an item or two you think you would enjoy from lunch.

We’ve heard horror stories from numerous people about their visits, and fortunately we didn’t encounter any food that tried to kill us (though some lunch items were less than desirable). Ice cream for breakfast is hilarious and fun, the puffed french toast should be served everywhere in the Magic Kingdom, and the breakfast lasagna was brilliant. Lunch tried to substitute numerous cold salads in lieu of quality tasting hot food, which didn’t really work, and the hot food wasn’t much better.