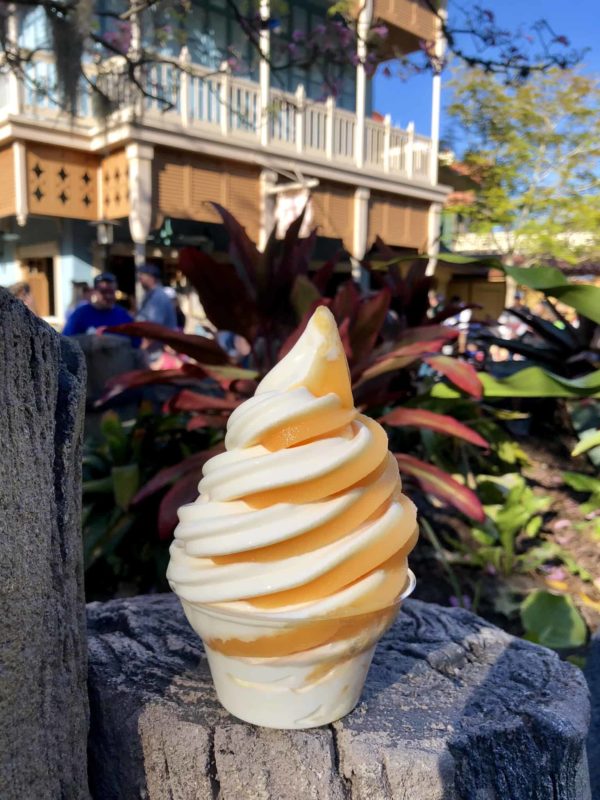 In a rather unbelievable piece of news, the Magic Kingdom’s Sunshine Tree Terrace has removed the beloved Citrus Swirl and replaced it with an “Orange Swirl”, a blend of orange and vanilla soft serve ice cream.

We went up to the counter and asked the cast members what was different about it. They said the orange soft serve is now vegan-friendly (just the orange which you can get by itself) and a new recipe that legally prohibits them from calling it a “citrus swirl”. Hearing this, we had to try it (in both cup and float form).

The new offering is way more orange in color than the original. The flavor change is noticeable too, as it is now way less tart and more sweet. Personally I liked it a little better, but I was never a big fan of the Citrus Swirl. That being said, the float didn’t blend as well as the previous recipe.

The citrus portion of the former swirl consisted of frozen orange juice, making it basically an “orange slush”.

The change seems particularly strange given the history of the original recipe going back to the 1970’s. Enough fan outcry over the years led to the unbelievable return of The Orange Bird and the Citrus Swirl back in 2012. In addition, the treat has remained popular since its return. Whatever the reason, the Citrus Swirl has “flown the coop” in favor of this new Orange Swirl.

Previous
VIDEO: All Details about Disneyland Paris Festival of Pirates and Princesses