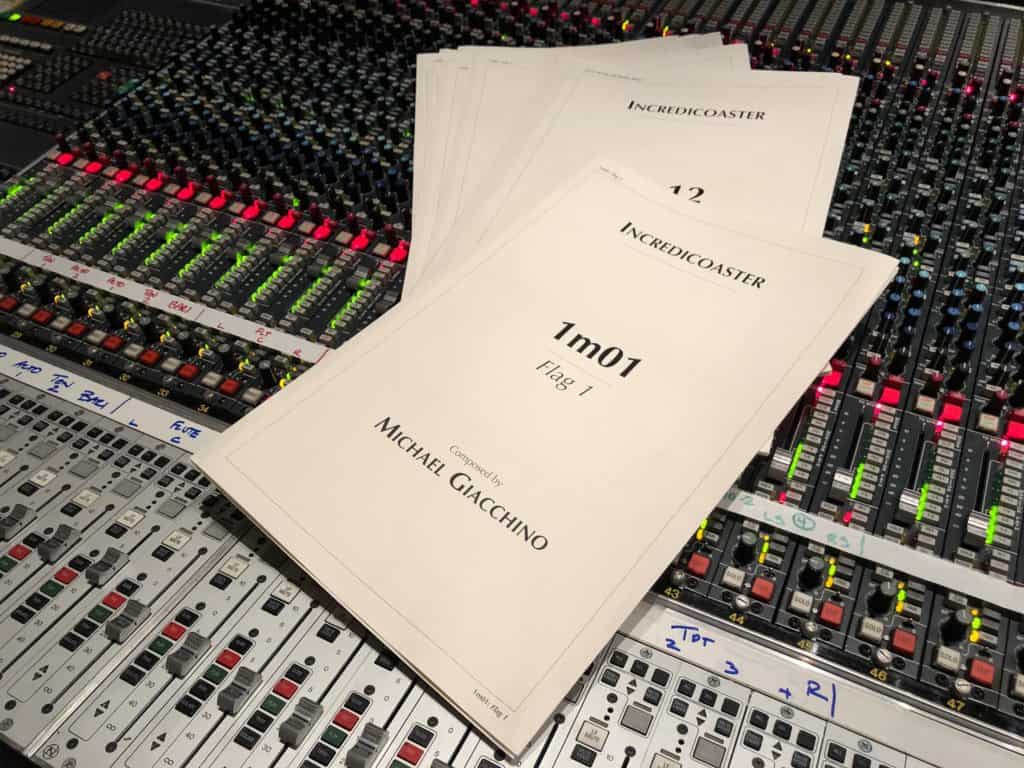 Last week, The Incredibles film composer Michael Giacchino took to Twitter to confirm they wrapped up the orchestra recording of the Incredicoaster soundtrack, which officially opens on June 23, 2018 in Pixar Pier at Disney’s California Adventure theme park.

Did this today!! Can not WAIT for you to ride the new Incredicoaster!! pic.twitter.com/k5xcM2y1hh

As the composer for both of “The Incredibles” films, Giacchino has composed a new original score to accompany this newly modified ride which is a re-theme of the existing California Screamin’ roller coaster. The photo shows off multiple books of the sheet music, with numbered titles corresponding to the audio cues of the coaster train and its position on the track. The existing California Screamin’ soundtrack had some sections of music that were flexible – either transitioning early to the next cue, or lasting longer, depending on the speed of the train, which can vary due to the weight of the guests, or if the train gets stopped or slowed down on a mid-course brake run.

The original California Screamin’ coaster was an opening day attraction in Disney’s California Adventure, opening in 2001. On January 8, 2018, the coaster closed to be transformed into The Incredicoaster, to match the theme of the new area, now called Pixar Pier. In January 2007, the California Screamin’ attraction was temporary retitled to Rockin’ California Screamin’, and the soundtrack, which was originally composed by Gary Hoey and George Wilkins, was replaced with the Red Hot Chili Peppers’ song “Around The World”. (At the same time, Space Mountain became Rockin’ Space Mountain.) A new safety spiel by Neil Patrick Harris replaced the original spiel by Dee Bradley Baker in 2010.

Replacing a beloved soundtrack in the parks has been a fiery topic with Disney fans. Most fan reactions to the new Space Mountain soundtrack were not great, lamenting the replacement of the iconic surf style sci-fi music that originally was heard on the ride. The California Screamin’ soundtrack was unique and themed well to the high speeds of the ride and carnival-style location. Luckily, fans can always listen to the Official Albums, or watch WDWNT videos of the attraction.

It might take some time for fans to warm up to this new 1960s future-stye genre that accompanies the film, but a new updated soundtrack on any ride means more Disney Parks music to enjoy. When you take into account this new soundtrack, the new paint scheme, lighting, and added special effects the ride is receiving, it is sure to make for a great new experience.