Thanks to a new piece from Barron’s, we have some interesting new tidbits to tide us over until the opening of Star Wars: Galaxy’s Edge later this year at Disney Parks.

Building exteriors in Galaxy’s Edge are designed to look weathered from the first day of completion; visitors who have seen Harambe Market in the Africa section of Disney World’s Animal Kingdom, near Orlando, Fla., will find a similar attention to detail here, such as the way faint rust streaks flow down from the corners of metal grates. 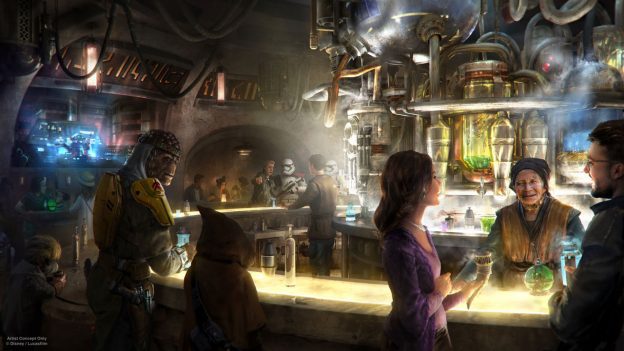 Some first impressions of Oga’s Cantina from the inside:

The first public restaurant in Disneyland to serve alcohol, Oga’s is relatively small for aesthetic reasons, and is likely to be popular. To maximize capacity and keep visits from becoming all-afternoon affairs, most guests will stand. There will be a handful of booths with seating around the outer edge of the restaurant; no decision has been made yet on whether or how these can be reserved. An intricate tangle of tubes and vessels behind the bar might make some drinks appear to flow from the ceiling. We heard a mention of a Fuzzy Tauntaun, named for the furry snow lizards ridden in Empire Strikes Back, although it’s unclear if that’s a hypothetical drink or a planned one, and the menu is still being decided.

Here are the deets on getting yourself some Blue Milk on Batuu:

Visitors will be able to order blue milk at Galaxy’s Edge, recalling the secretion of a bantha—a large, hairy animal with spiral horns—drank by Luke Skywalker in the first film (which, due to the later addition of prequels, is now known as Episode IV: A New Hope). This will be a nondairy drink. It’s unclear whether it will be sold in Oga’s or in the outdoor marketplace, or both. It’s possible it will be sold by or near a bantha farmer, suggesting the marketplace.

Lastly, some details on shopping at Black Spire Outpost along “Merchant Row”:

Shops will be supplied from a common stockroom, and restaurants from a common kitchen, to increase efficiency. One shop will feature droids that visitors can customize through an interactive experience. A droid that is made to be, say, afraid of stormtroopers might signal its fear when one comes close. Droids owned by members of the same group might recognize each other when they meet. Prices have not been set. The shop might also sell a full-size R2-D2 for well-heeled fans, perhaps costing thousands.

There will be another shop presided over by Dok-Ondar, a collector who is briefly mentioned in Solo. This character, likely animatronic, will be set apart in a booth from the rest of the staff, not unlike the dispatcher Louie De Palma in the old ABC sitcom Taxi. Cast members might interact with Dok-Ondar, asking him what he’s willing to let certain items go for. Elsewhere, there will be an outdoor market resembling a bazaar. A pod-racing engine, perhaps at the market, will be used to roast meat.

For Galaxy’s Edge, imagineers have worked with filmmakers, chefs, and merchandise executives to take adherence to storytelling to new levels for a Disney park attraction. One possibility is that Star Wars merchandise in shops will come in unique packaging that downplays the logos. Another is that merchandise based on familiar characters will take on new looks. The imagineers visited the archives at Lucasfilm for early concept art. As a hypothetical example, an artisan figure of a familiar character might look slightly off, with the back story being that residents of Batuu have never seen that character, so they don’t know exactly what the figure should look like.

For more, you can read the entire Barron’s piece here.