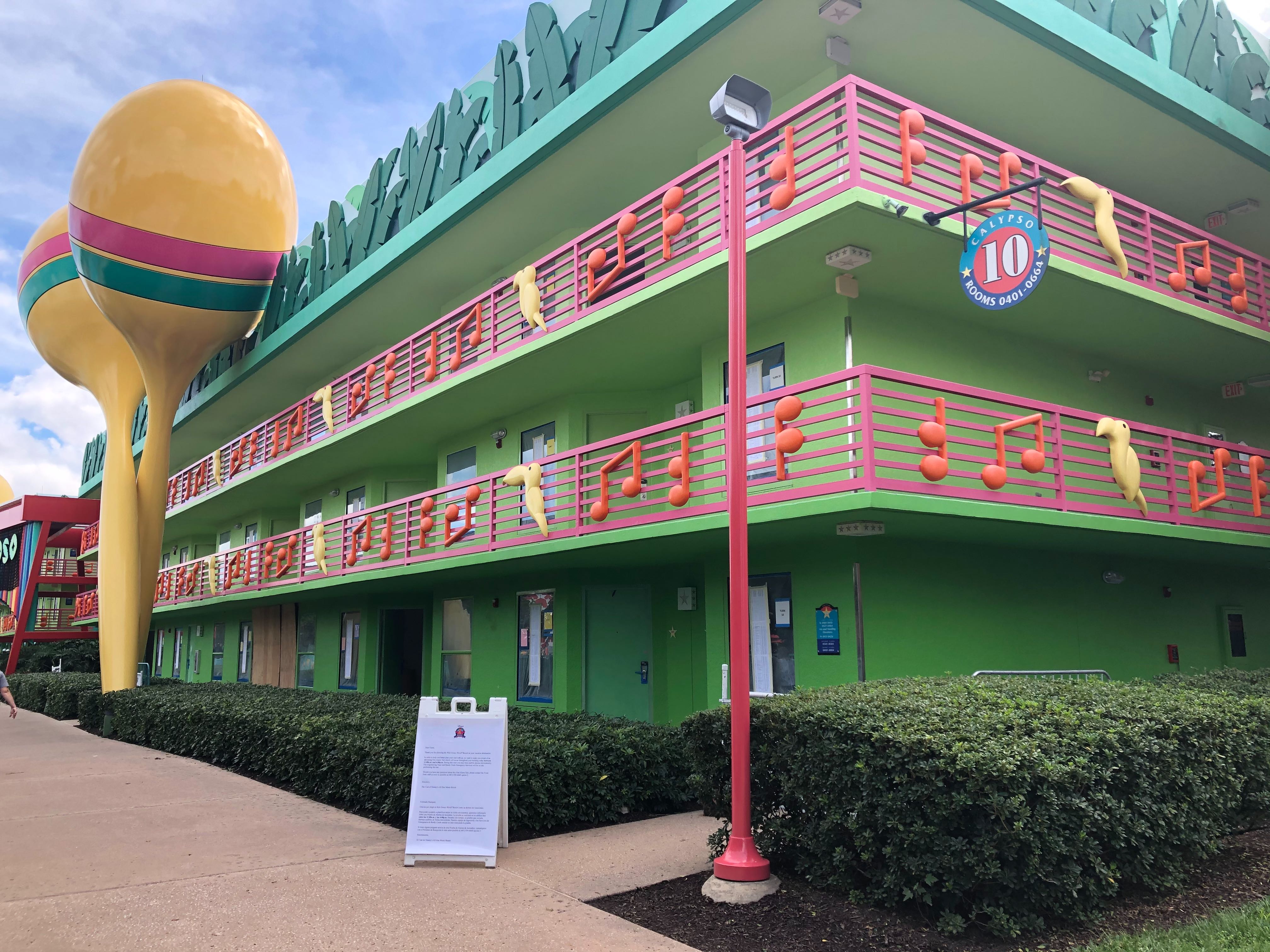 Room refurbishments have been underway at Disney’s All-Star Movies Resort for just over a year now, but with improvements finalized over on that side of the resort, work has begun on the guest rooms at Disney’s All-Star Music Resort. We were out there today to check in on the latest construction progress. 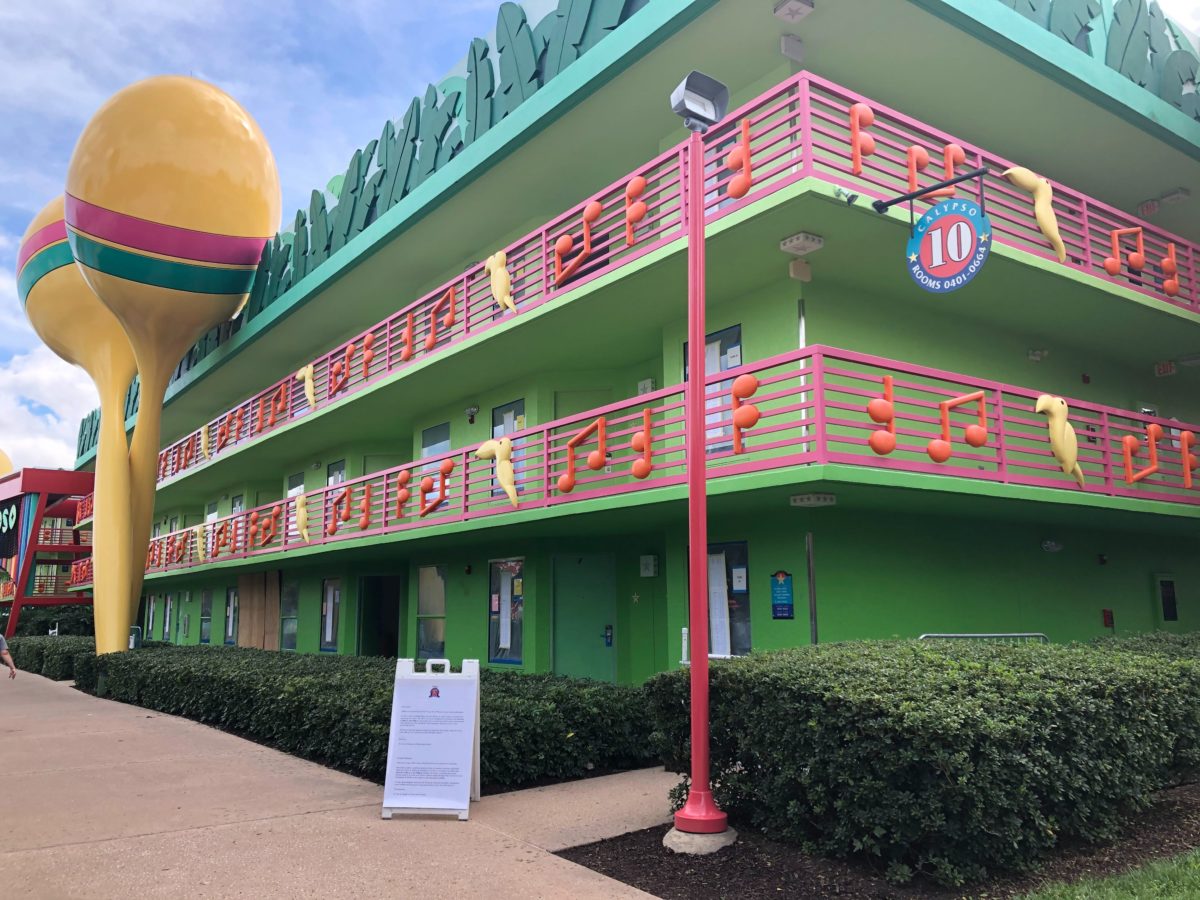 Work is starting on Building 10 of the Calypso section, meaning the resort is down an entire section of Preferred Rooms. 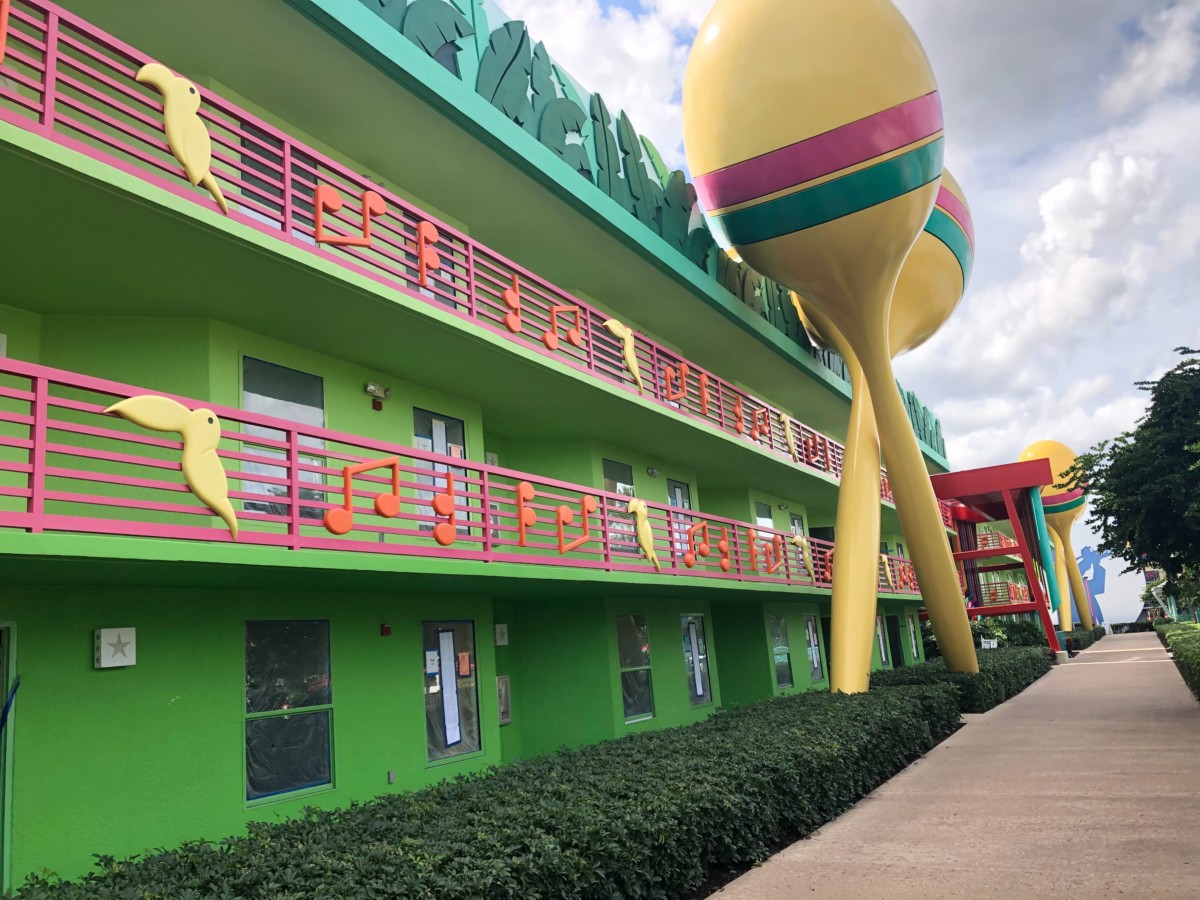 Based on how All-Star Music is set up with no room buildings flanking the main lobby, this could mean your odds of getting a Preferred Room close to Intermission Food Court and the bus stops are slightly lower. Do keep in mind that parts of the Jazz section are also considered Preferred Rooms, so more and more Preferred Room guests may be getting funneled back that way out of lack of rooms in Calypso. 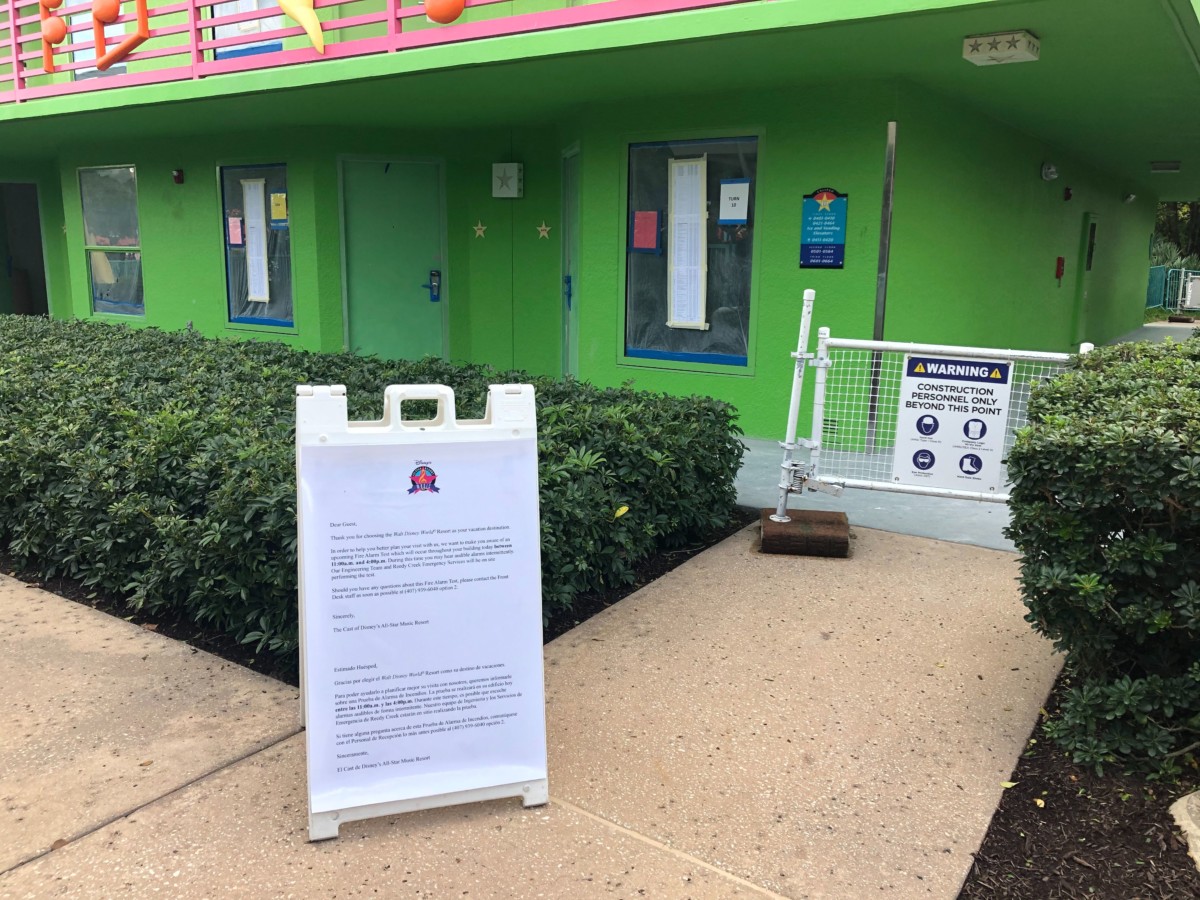 As part of the ongoing construction, signs are out alerting guests to the upcoming Fire Alarm Tests. 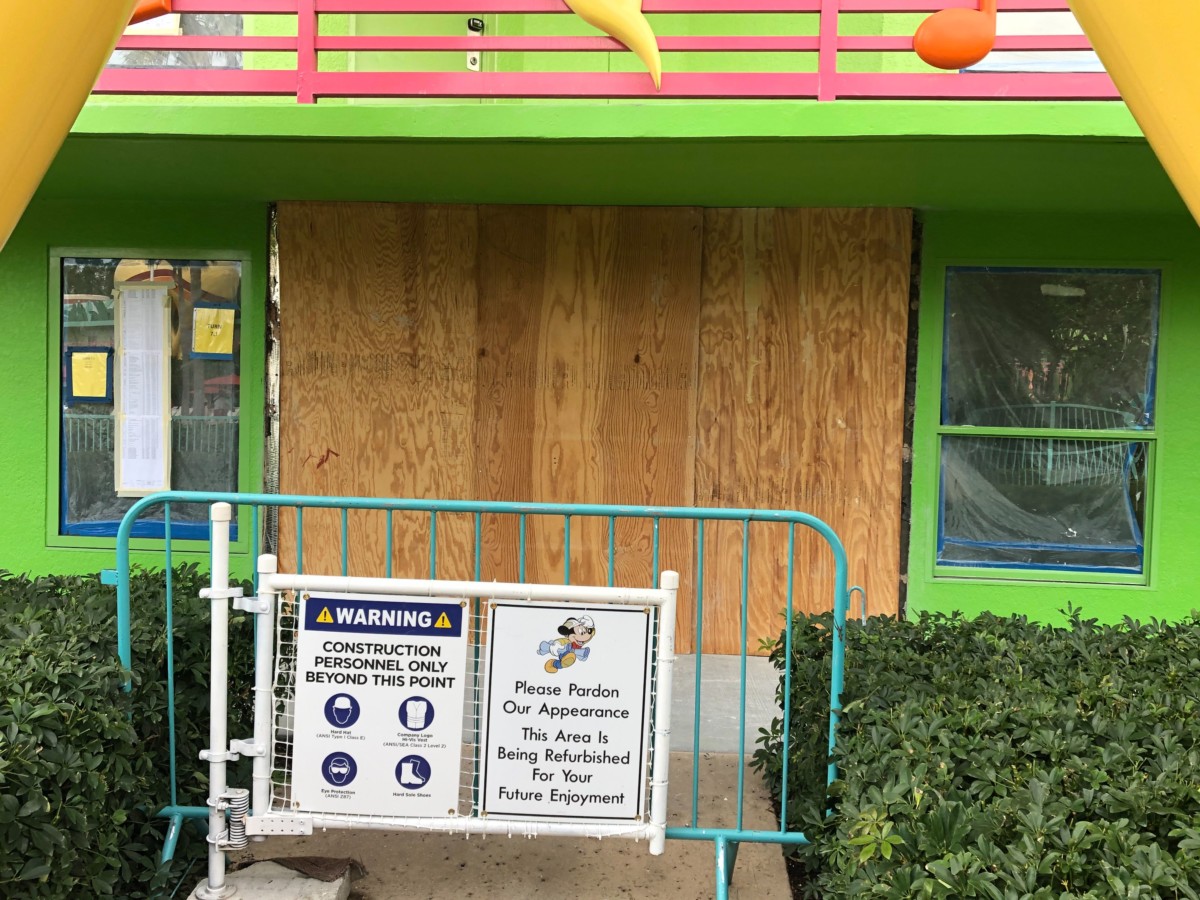 Some of the rooms in Calypso are also Family Suites, so it’ll be interesting to see how those turn out given that we only have an idea of what standard 4-person rooms look like. 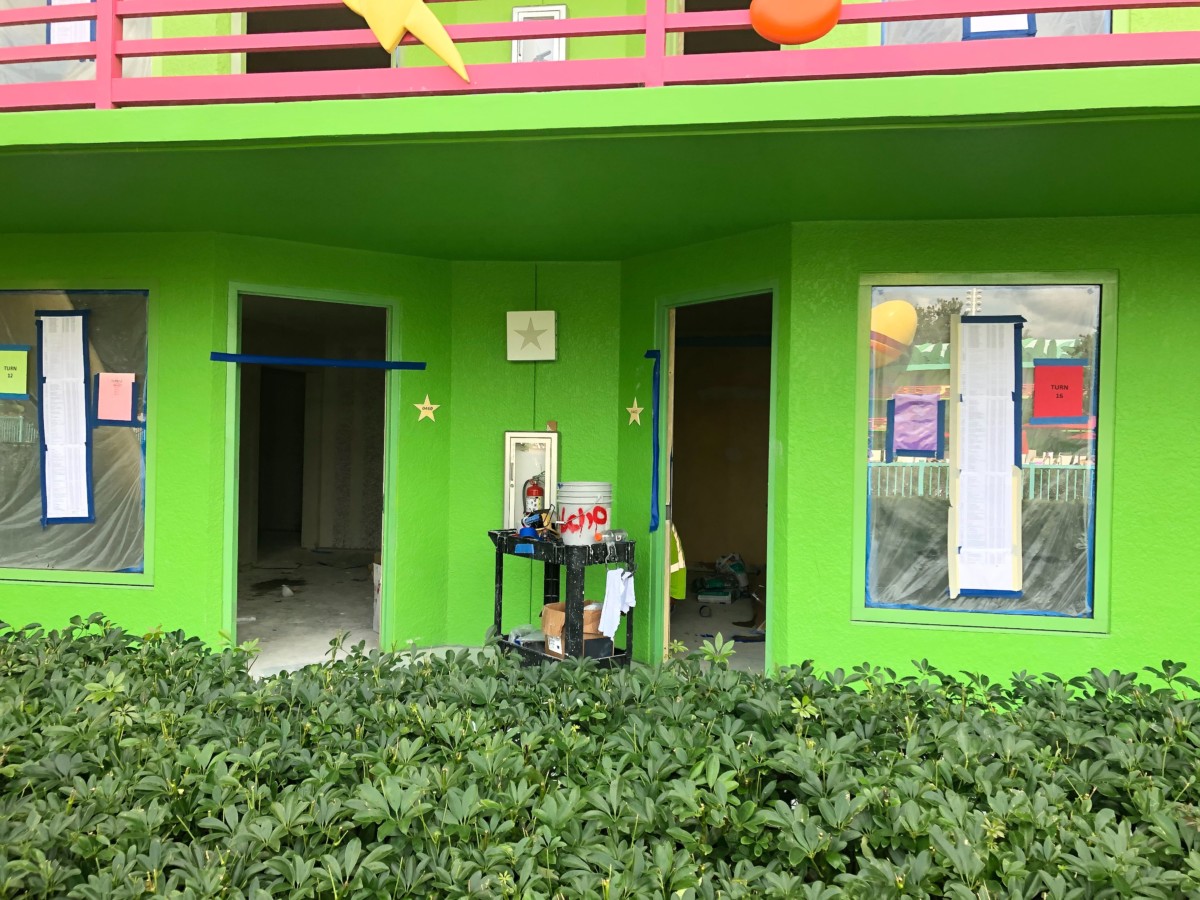 For the most part, however, the rooms are slated to look just like the ones at Disney’s All-Star Movies after the refurbishment, with clean white walls, updated coffee stations, a Mickey headboard, and Huey Dewey, and Louie art in rooms with pull-down murphy beds. You can check out a photo tour of the remodeled rooms here. 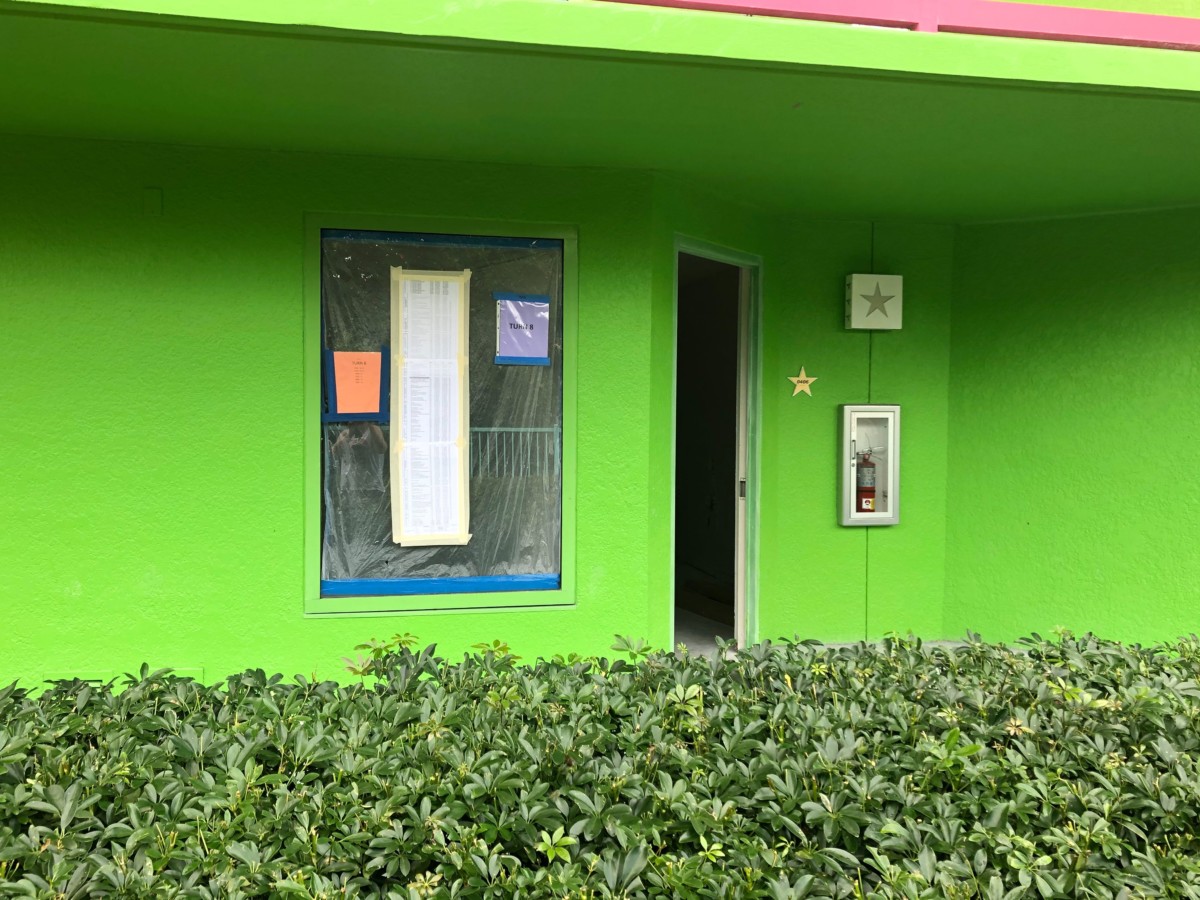 For now, it seems the entire building is getting gutted, with each window showing permits and lists for ongoing construction. 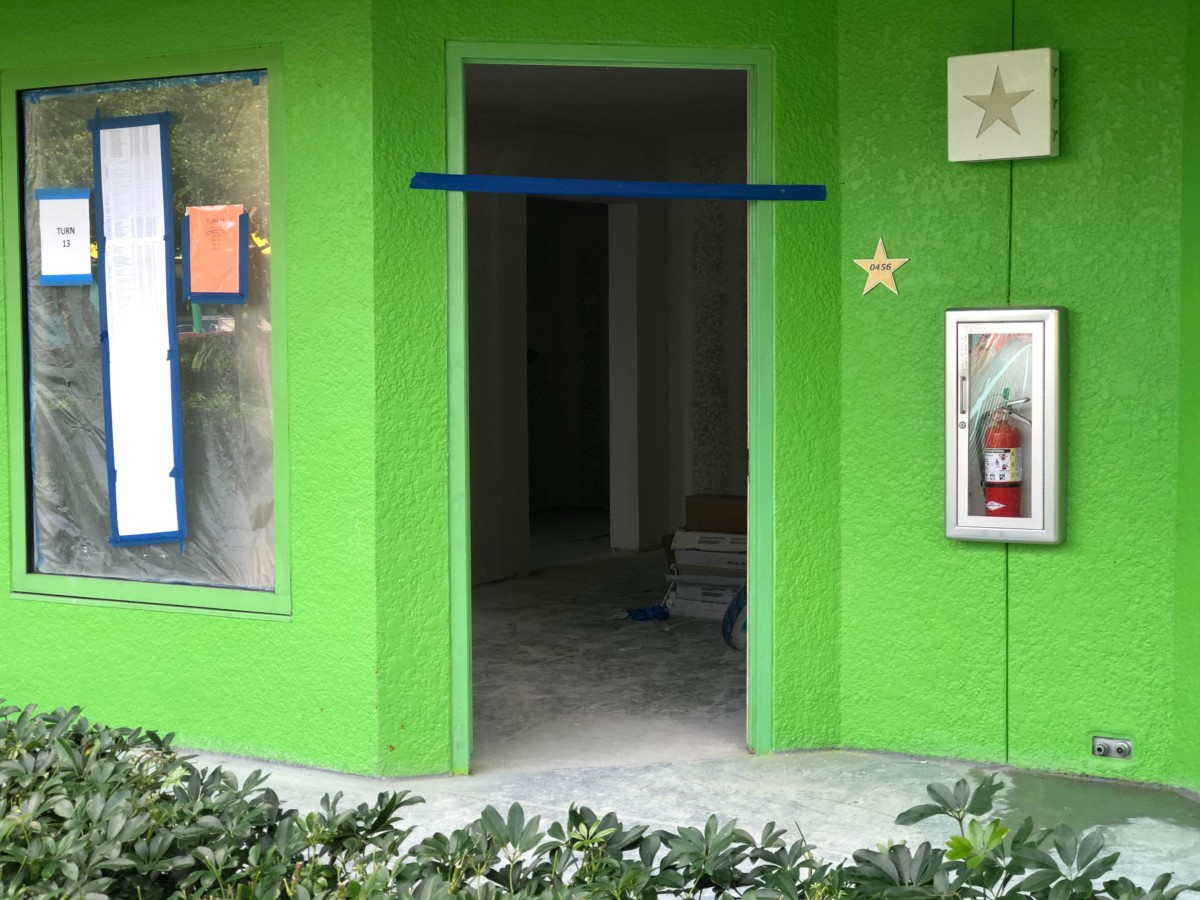 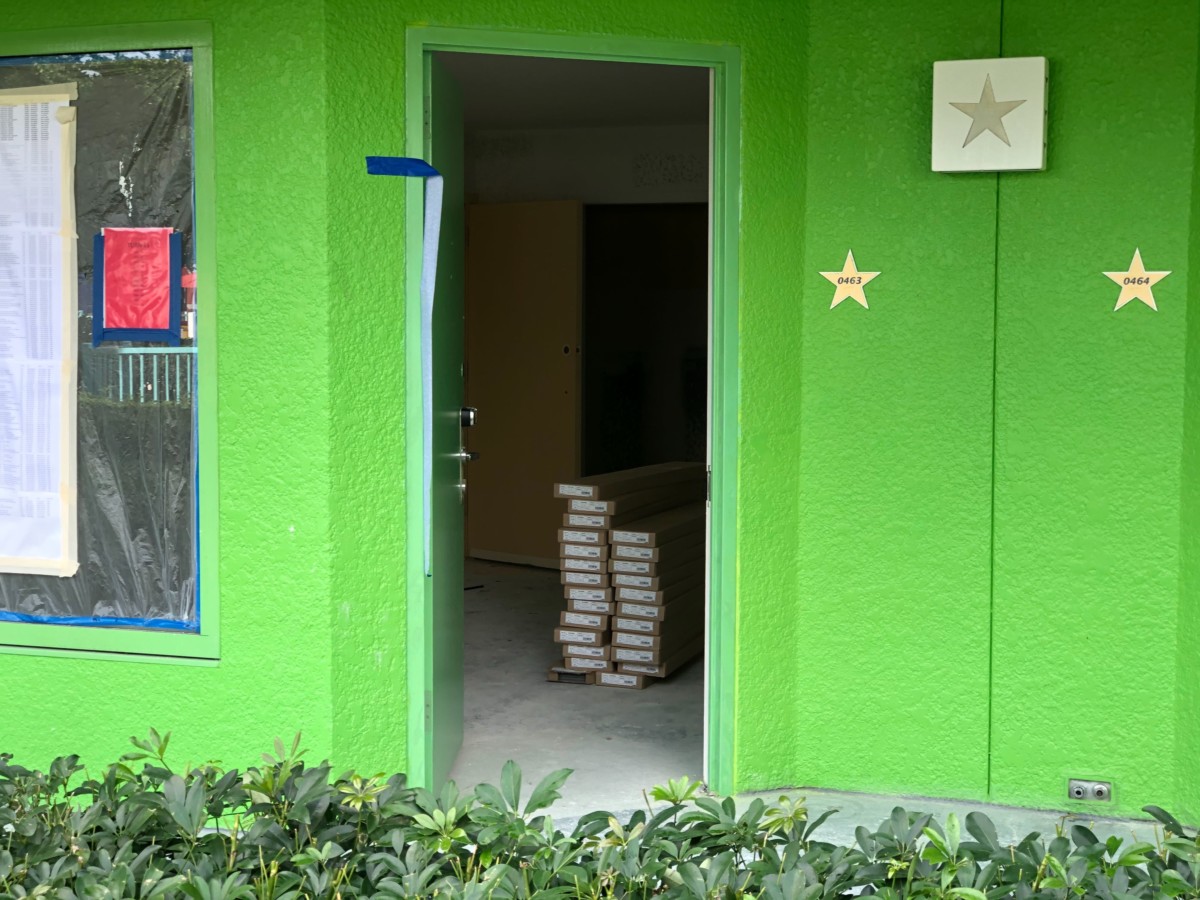 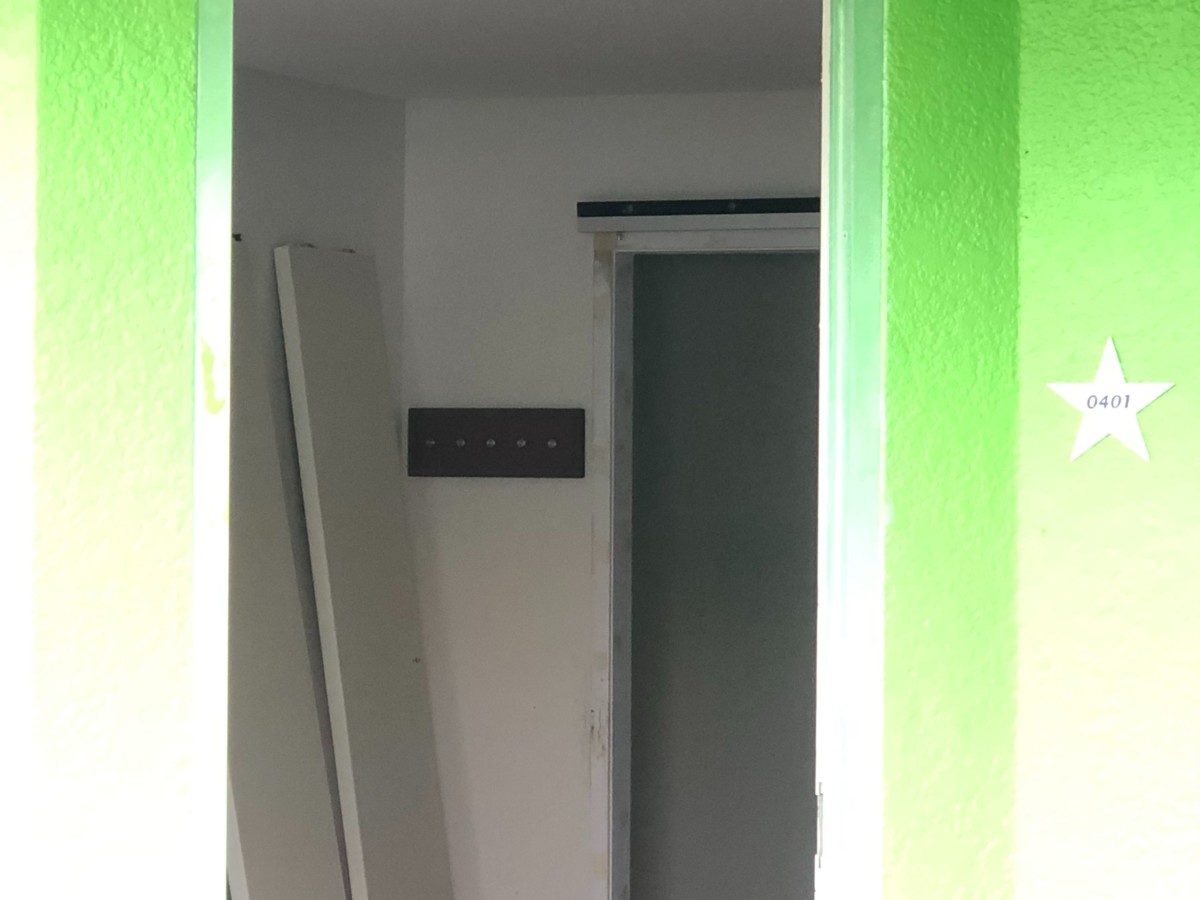 This room already seems to have some final touches, with the newly updated coat rack and even the track for the bathroom barn door installed. 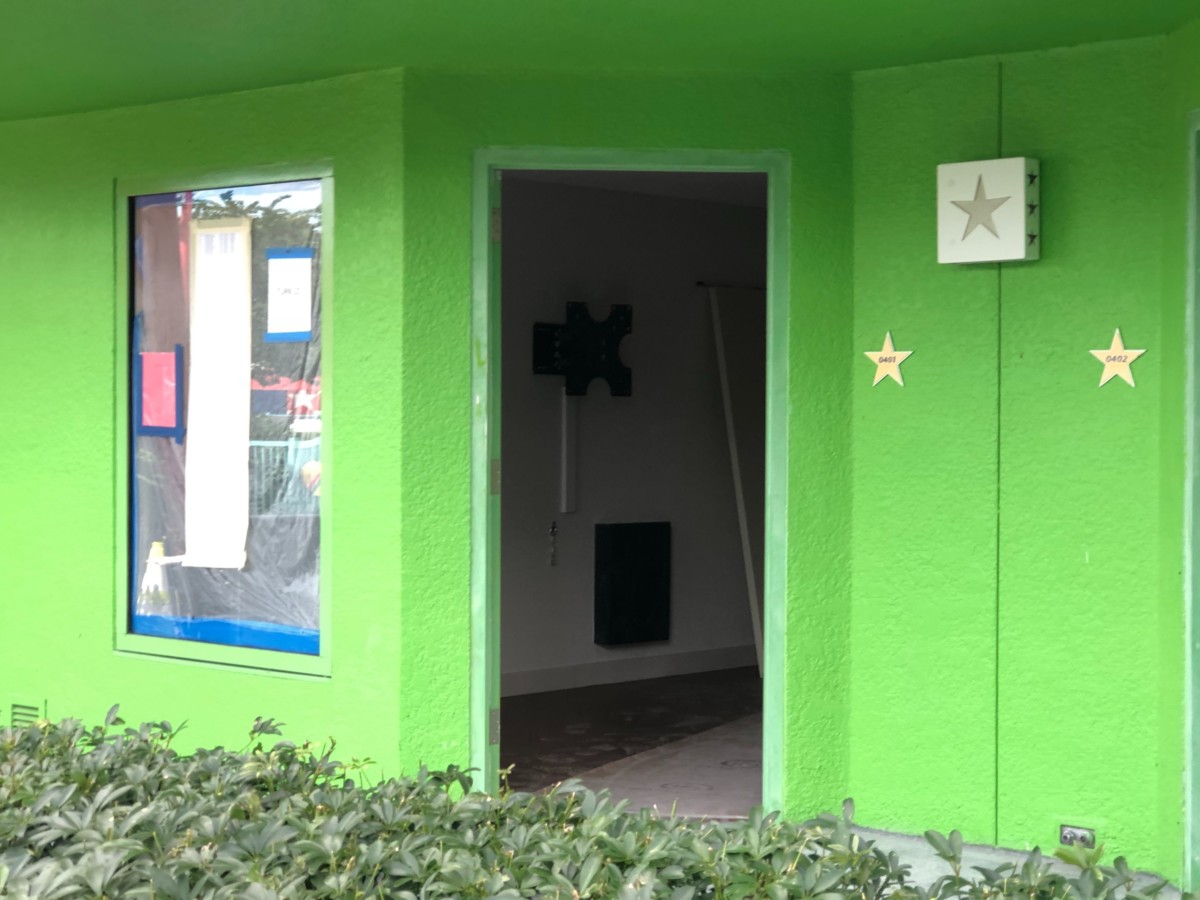 All rooms feature a huge flat-screen television, larger even than most older televisions at Deluxe Resorts that haven’t been refurbed yet. The televisions are placed on moving arm displays so you can tilt them to your preference. 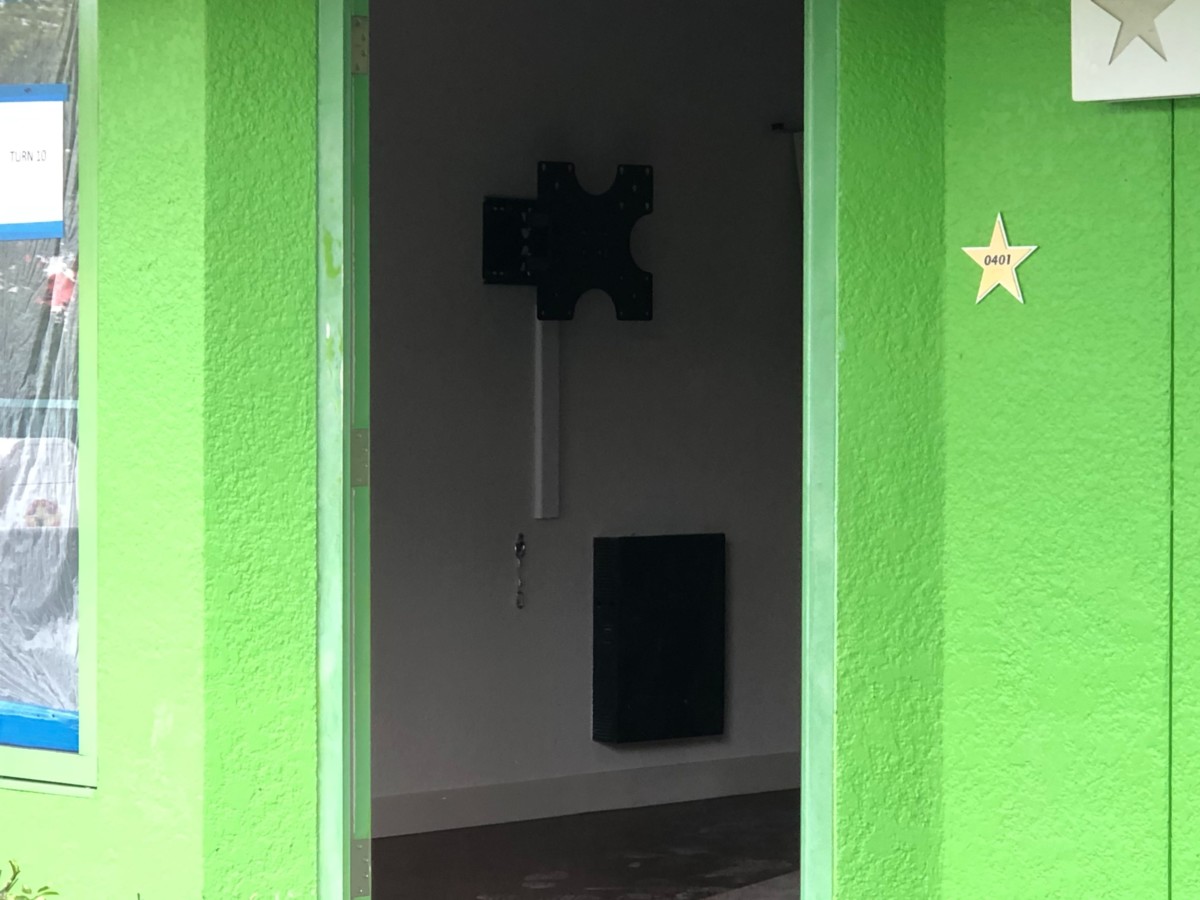 Another important amenity that’s getting an upgrade with these refurbs is the hotel Wi-Fi. I stayed at Music recently and was appalled by the slow download speeds at this resort. (Seriously, you could do better on a resort bus.) The Wi-Fi at all refurbished resort hotels, like Disney’s All-Star Movies and Disney’s Port Orleans Resort, is far better and faster. This is because all of the wiring and fiber-optics get redone as part of the refurb.

We’ll keep you updated on the status of this ongoing refurbishment as it progresses to other buildings at the resort. It’s likely to move on to either the other Calypso building across the pool or down to the Jazz building, but only time will tell.

Are you looking forward to staying at Disney’s All-Star Music Resort after the rooms get a refresh? If you are a fan of the old-school rooms, I suggest getting your stays in soon, before it all is transformed.

Next
PHOTOS: Ring In the New Year Early with These New 2020 Ornaments at Walt Disney World