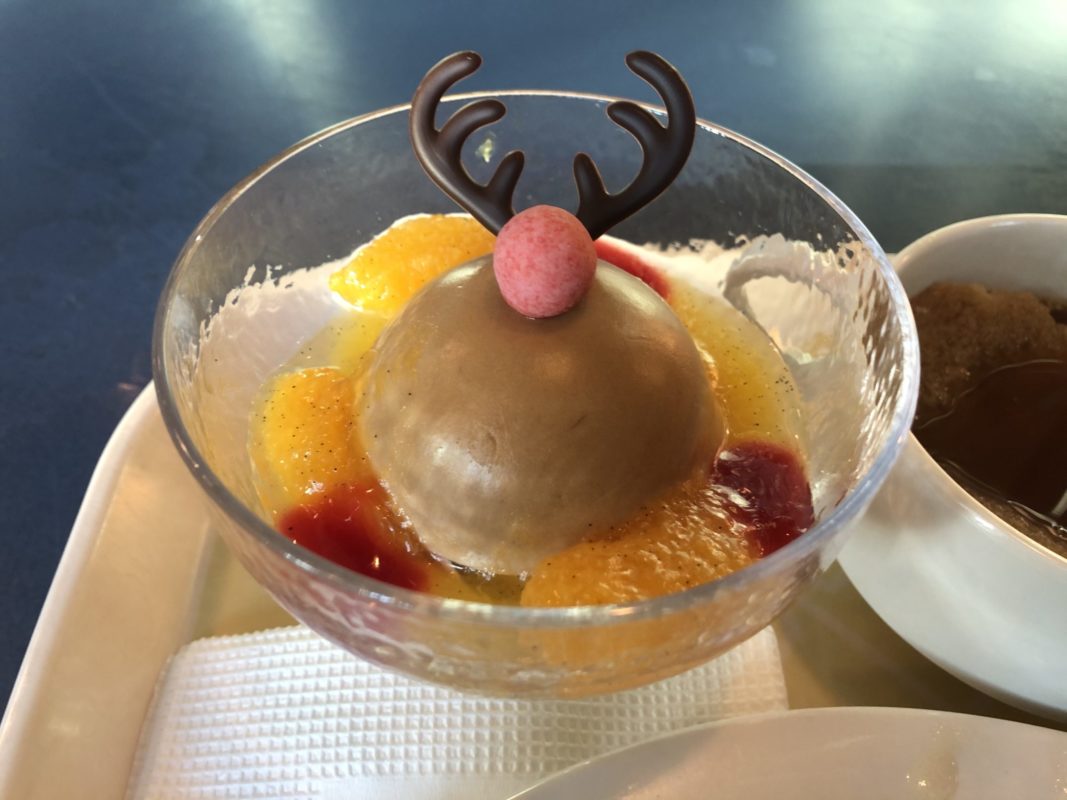 Ho ho ho! Merry Disney Christmas, everyone! It’s the holiday season at Tokyo Disney Resort, and that means a new slate of food to devour and review for you all! So, let’s take a closer look at the tasty treats to celebrate the season this year!

Horizon Bay Restaurant, as I’ve mentioned before, is one of my absolute favorite eateries at Tokyo DisneySea. The impeccable theming of a futuristic yacht club in a distinctly late ’90s/early aughts vision combined with the consistently excellent food makes it one of the best counter-service eateries! This is despite being generally overlooked by foreign visitors, and now requiring reservations. But don’t let the price tag and reservations dissuade you! Especially with this delicious holiday twist on the Select Five set! 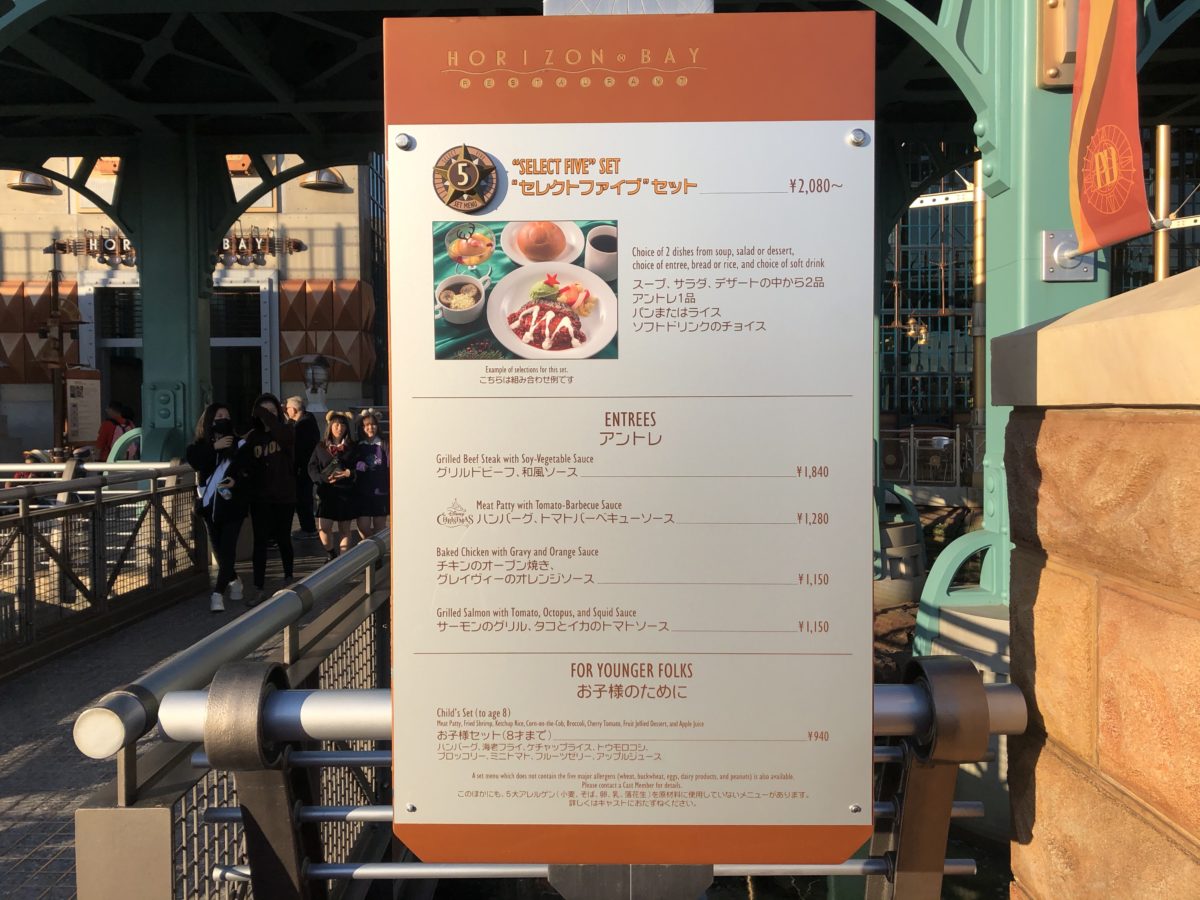 The Select Five set is standard fare at Horizon Bay. Usually, you’ll choose any five items (I almost always go for whatever is seasonal), and pay a flat fee. We added a bit more so we could review everything for you guys, though! There’s three special choices you can make for your entree, appetizer, and dessert. Along with the drink and bread, that rounds out the full normal five. We also elected to go for the special souvenir coffee tart, and the adorable SnoSnow tray you see below! 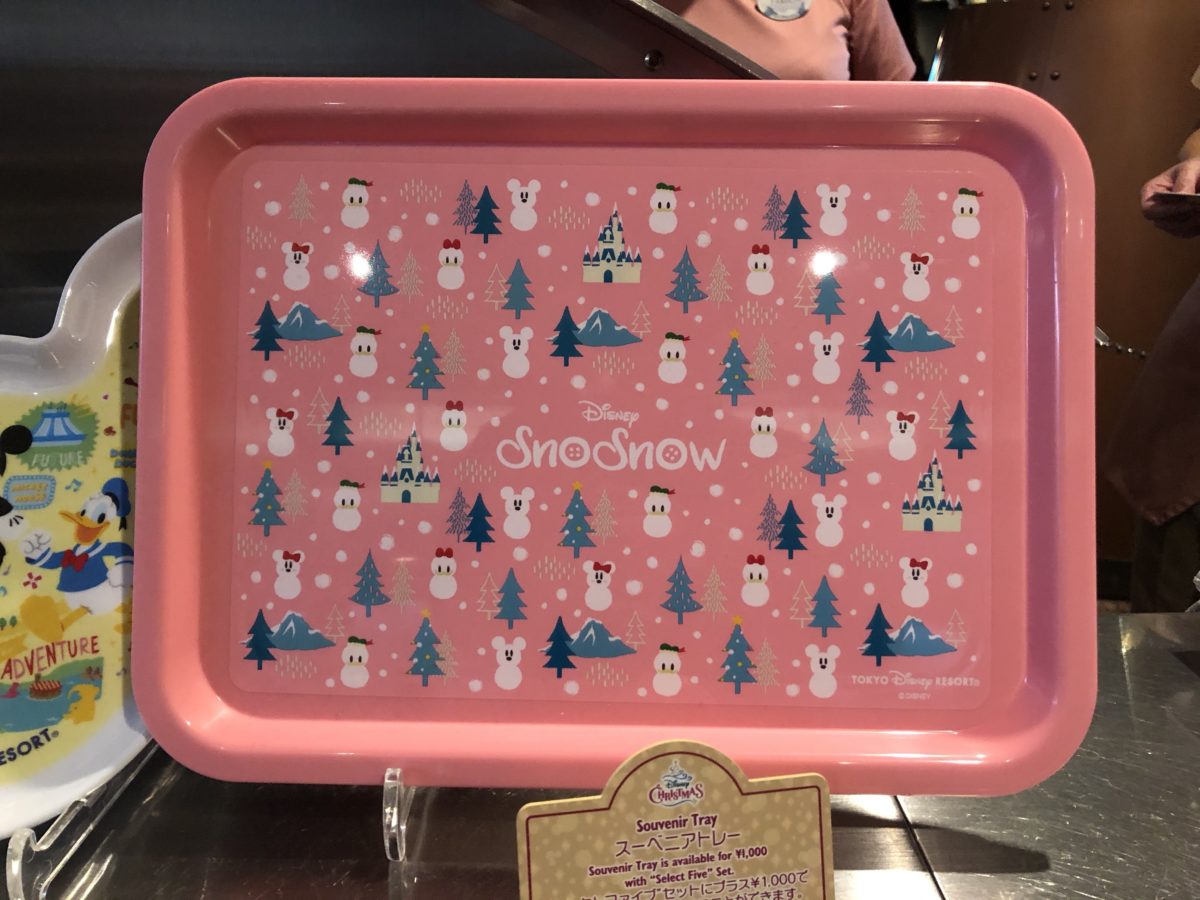 Oh. My. Gosh! Isn’t this just the most adorable thing? There’s all four of this year’s SnoSnows (Mickey, Minnie, Donald, and Daisy) along with trees and the two park icons! Every merch person should 100% add this to their collection! 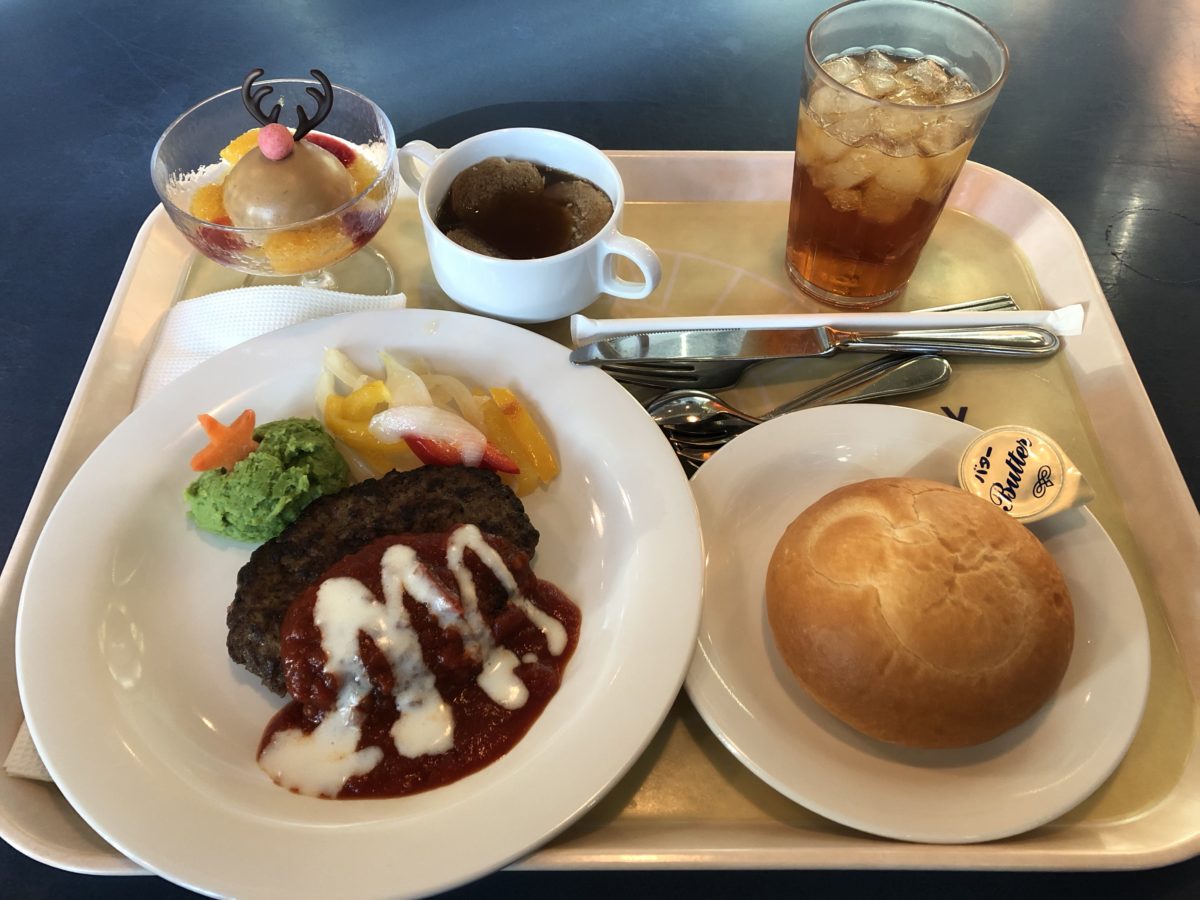 After all was said and done, this was our full set. For the drink, I chose the Kirin Apple Tea Soda. Incidentally, it’s the best soda I’ve ever tasted, and it’s only available at Tokyo Disney Resort! 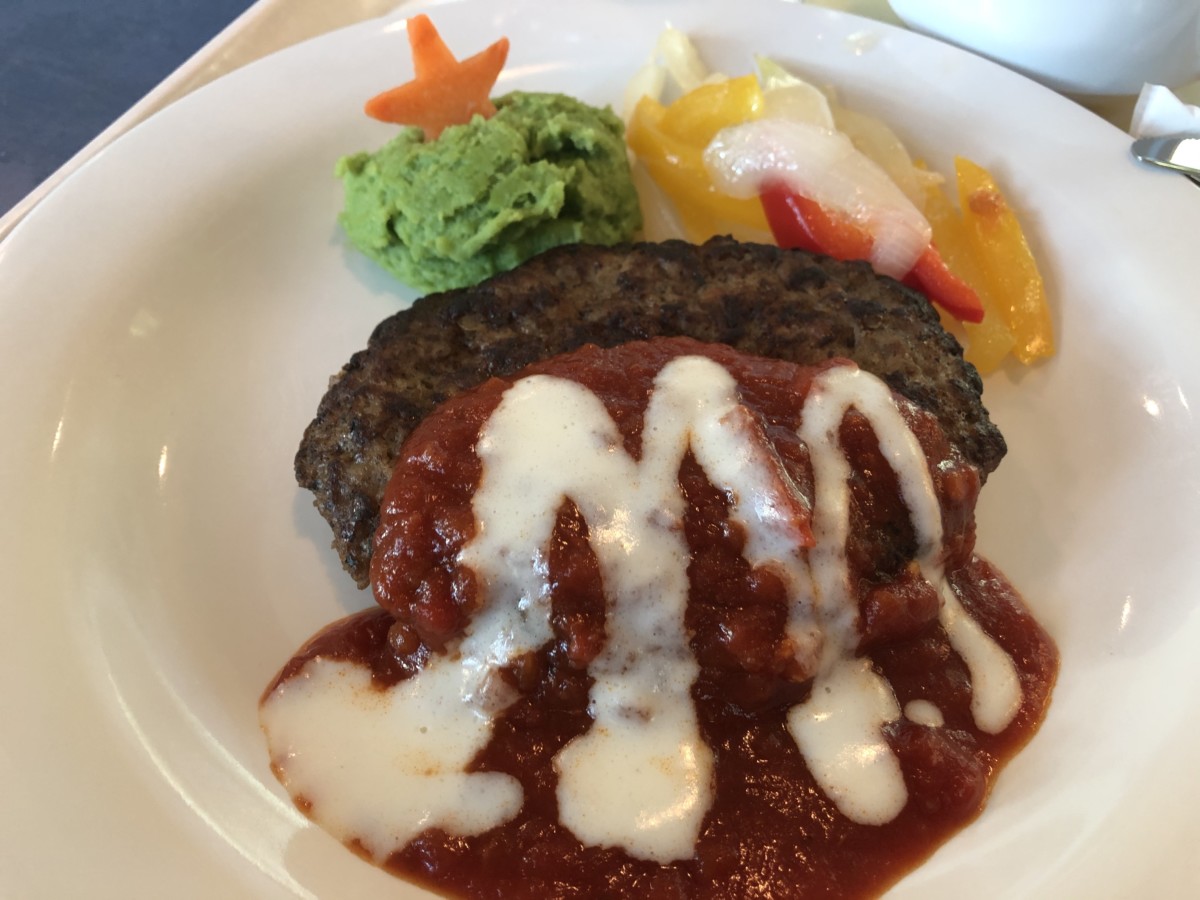 Before we go any further, let’s talk about the awesome presentation of the mashed potatoes, complete with star-shaped carrot! I’ll come back to the taste, but I feel like that’s something we really needed to point out.

The main attraction, of course, is the meat patty. It’s incredibly juicy and cooked almost to perfection! The tomato-barbecue sauce and cheese added a nice balance to it as well. The upper half of the patty is comparably a bit dry compared to the bottom, but that’s easily solved by simply dipping that in the remainder of the sauce.

The side vegetables are mostly well-done, with the eternal exception of the onions. I loved that I could actually taste the bell peppers and get their natural juicyness. Unfortunately, the same cannot be said for the onions, which are largely bland and tasteless. Unfortunately, this seems to be largely commonplace for Tokyo Disney Resort’s vegetable garnishes.

Back to those potatoes: It may just be the long-time southern resident in me, but these potatoes desperately need seasoning and butter. Fortunately, some of the bread butter can be repurposed for them. Despite their blandness, the potatoes weren’t dry and otherwise were a nice little addition. Can’t beat the carrot star in aesthetics! 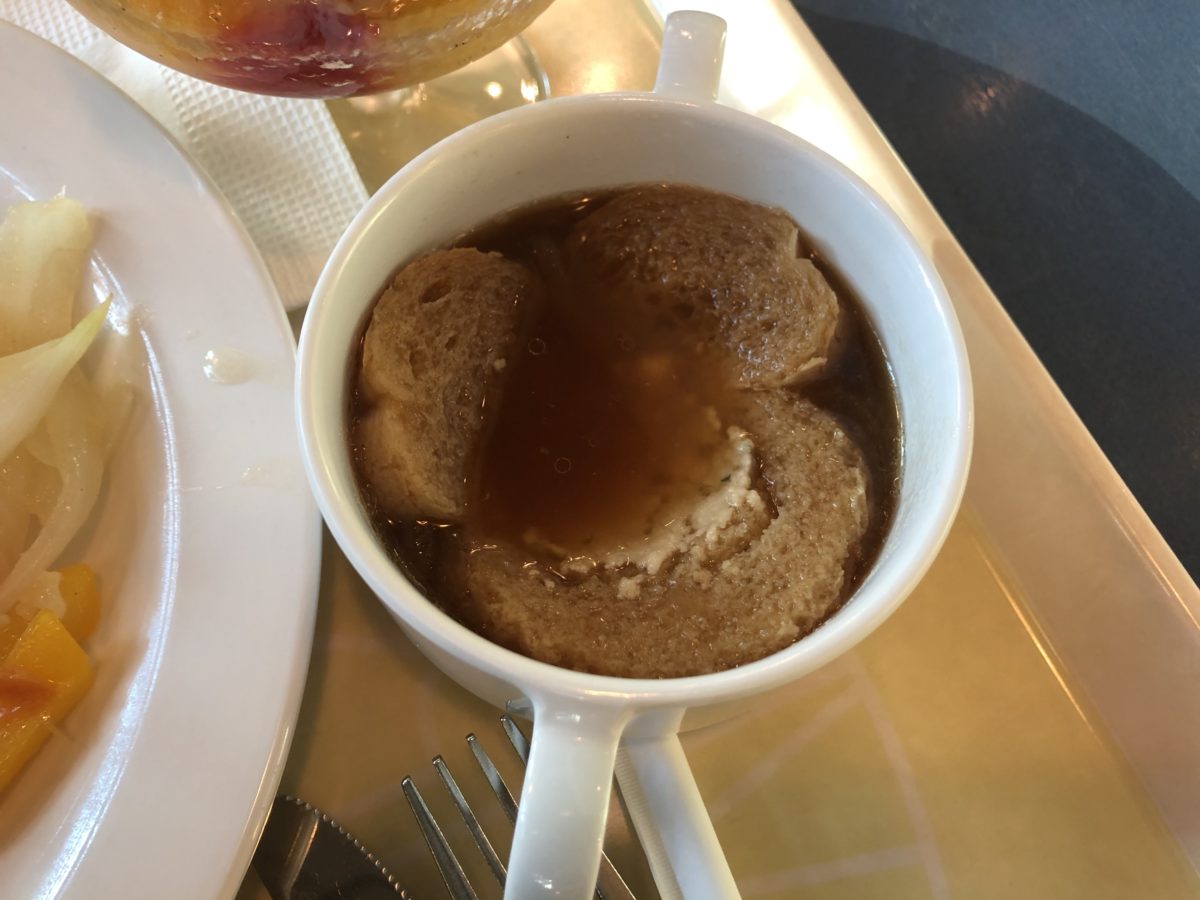 Okay so there’s a lot going on right here, and some of it could’ve easily been improved. Starting with the positives, the soup definitely features onion, but doesn’t overwhelm you with it like some onion soups are prone to. You won’t walk away with that acidic onion taste in your mouth after eating this, but it certainly still hits you with a nice helping of flavor. Where it all falls apart, however, is the bread. Many soups use a dried bread as a central garnish, but it seems that Horizon Bay’s chefs chose to use normal bread. The problem with this is that unless you eat it straight after you pick it up from the buffeteria line, you’ll end up with a soggy cheese-covered piece of bread. The Mickey shape is certainly cute, but the soggy bread definitely impedes your ability to actually eat the soup in a reasonable manner. 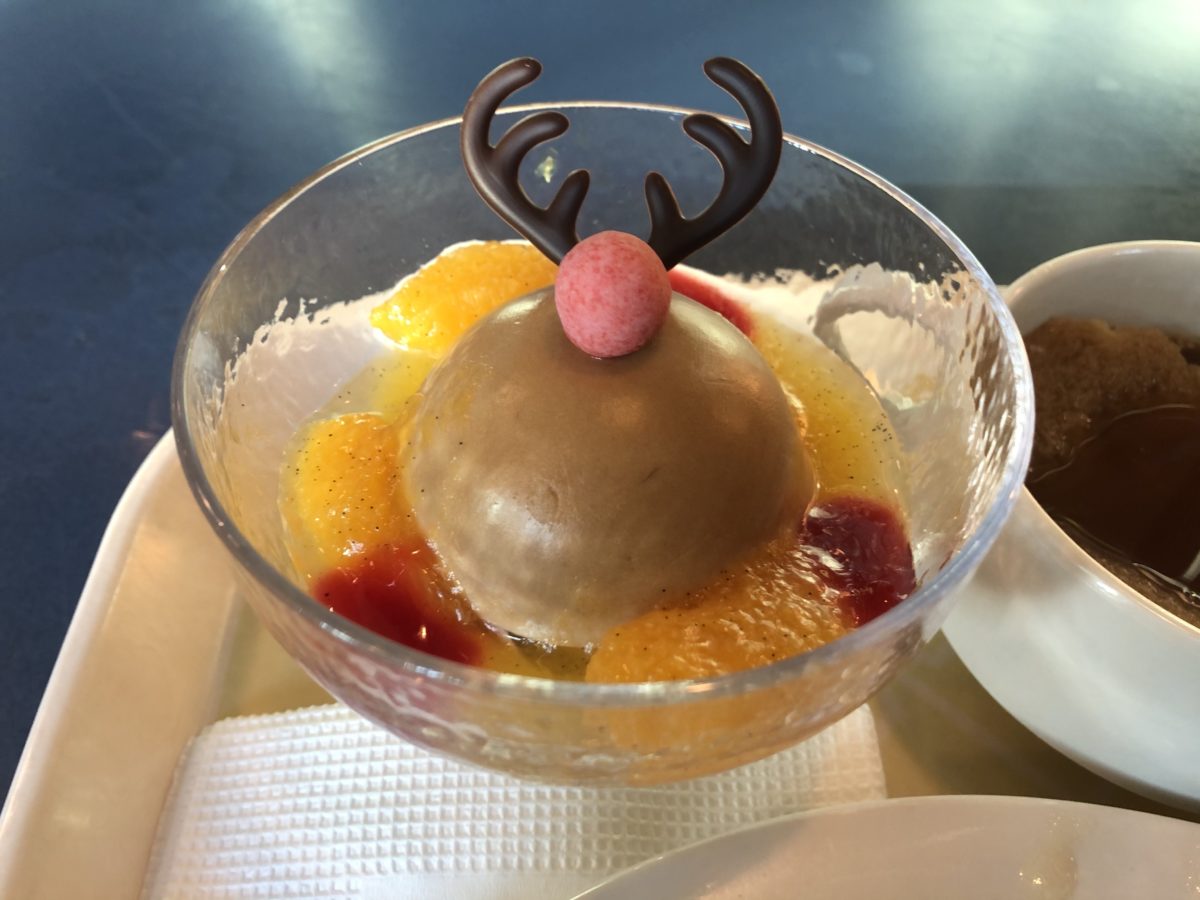 Like with the carrot star in the green potatoes, I’m loving the chocolate antlers and little red nose on this dessert! The presentation with this meal really is top notch. Like me, you may have wondered if caramel mousse and orange compote will complement or contradict each other in their strong flavors. Let’s start with them separately. The caramel mousse is excellent, striking a perfect balance between salty and sweet, while most caramel tends to err towards the latter. And the orange compote is nice and fruity, even featuring little fruit chunks that make for a nice finisher. But whatever you do, avoid getting them both in the same spoonful if you can! When you put them together, their equally strong and contrasting types of sweet work against rather than for each other. I loved both of these when I ate them separately, but together was just a massive shock of flavor that hurt both sides rather than helped.

How funny is it that both times I’ve done a full meal review at Horizon Bay, I’ve ended up with a coffee-esque souvenir dessert? Unlike the Pirates Summer dessert, this one is a tart rather than a roll cake. And I think that works in its favor, especially considering my distaste for coffee-flavored items. As I implied, the flavor here is less intense, and the portion is larger than the summer’s roll cake. With a light, fluffy interior and a delicious, crumbly crust, there’s no denying the tart itself is well-crafted and will please coffee-lovers.  I 100% recommend getting this whether you’re a coffee person or not, though, because the plate is just darling!

Overall, I’m very pleased with how the set turned out. Horizon Bay continues to be one of my favorite dining spots at Tokyo DisneySea, and I look forward to seeing what comes next! If you’re a picky eater and at a loss for where to dine, look no further than Horizon Bay Restaurant in Port Discovery. But you’d better hurry, because this special set only lasts through December 25th!