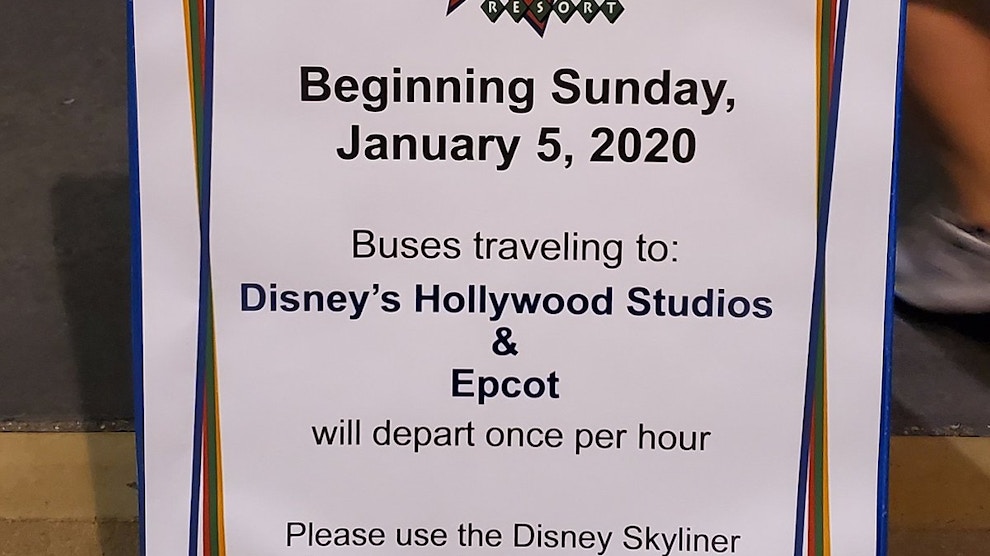 With the Disney Skyliner having been open for months, bus departures from Disney’s Pop Century Resort to EPCOT and Disney’s Hollywood Studios have been reduced to once per hour, effective January 5th.

According to WDWClub, the above sign was posted at Disney’s Pop Century Resort on the evening of January 4th. The Disney Skyliner will continue to operate on its current schedule, becoming the primary mode of transportation from the resort to the two theme parks. Bus service to Magic Kingdom and Disney’s Animal Kingdom is expected to be unaffected by this change.

While the Disney Skyliner is capable of moving high-capacity crowds from resorts to the theme parks, the system has been plagued with issues since its opening back in September 2019. Whether any extended downtime will trigger an increase in bus service to the resort has yet to be seen.

As of the writing of this article, we have not heard of any similar change affecting other resorts on the Disney Skyliner route, including Disney’s Art of Animation Resort, Disney’s Caribbean Beach Resort, and Disney’s Riviera Resort.

Keep reading WDWNT for further information on this ongoing story.

Love this change. From the point of view of the company, it makes sense to do this, the skyliner can move many more guests per hour than the busses, not to mention reduce the amount of fossil fuels used. I hope the skyliner is expanded across more locations on the resort.

Would love to know how this change impacts transportation times to and from the resort to the park. Any chance they will be posting wait times for Gondola’s on the app much like any ride. That would be a nice feature to plan for arrival times

This move shows the Skyliner has achieved the reliability Disney had hoped for.
I don’t think there’s any doubt that more buses will be quickly added if there’s problems with the Skyliner. That’s just common sense.

Like this is a surprise, naturally bus service will slow at all skyline resorts now that the sky liner is up. Only a fool would take a bus.