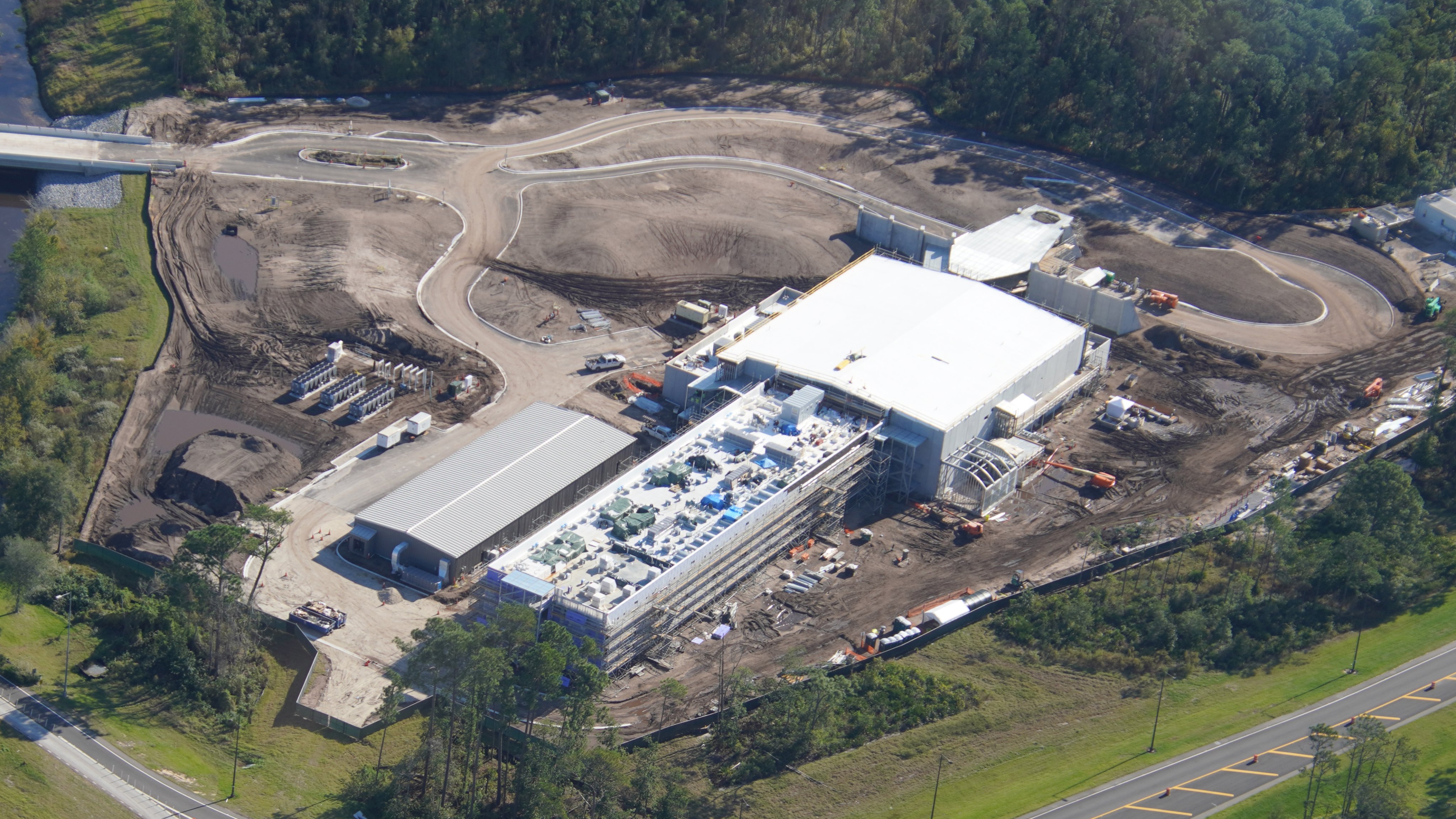 With Star Wars: Galaxy’s Edge open and Rise of the Resistance up and running, it would seem that all of the interstellar Star Wars offerings at Disney’s Hollywood Studios have been completed, but there’s one project still looming in the woods adjacent to Black Spire Outpost.

The Star Wars: Galactic Starcruiser, more colloquially known as the immersive, all-inclusive “Star Wars Hotel” opening in 2021 is well underway at Walt Disney World, and we now have the latest aerial and on-the-ground construction update for prospective passengers curious to know of its progress.

This image comes courtesy of @bioreconstruct, our go-to specialist for up-to-date aerial reconnaissance of the parks. Here, we see an overall view of how things are coming along at the hotel site. Since our last update, you can see that walls and siding are now up along the rectangular guest cabin section of the Starcruiser. Future roadways and green spaces have been further outlined with concrete forms, and you can somewhat make out all of the berms, paths, and turnarounds leading to guest and backstage areas. Along the perimeters of the resort, you can see that they’re starting to form dirt mounds on all sides surrounding the entrance, also known as the Galactic Starcruiser Terminal, comprised of a coffin-shaped overhang and large concrete walls flanking the sides. 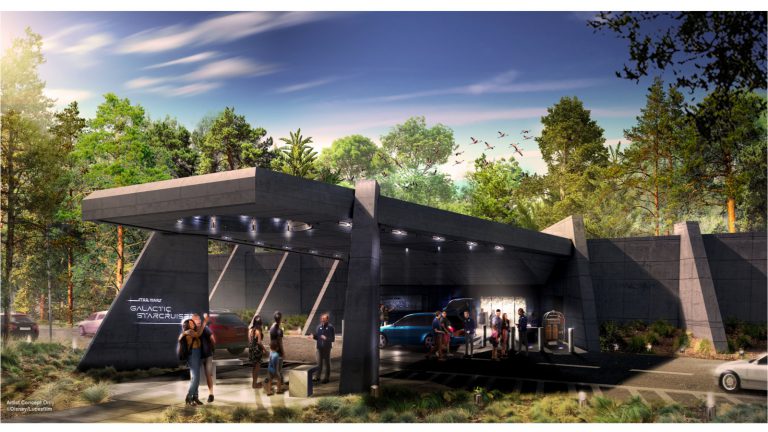 Once fully developed and landscaped, a lush tree line will block guests’ view of the actual hotel as they arrive. These trees will be planted along raised berms to further the visual illusion. (A similar version of this effect is employed in the DINOSAUR show building at Disney’s Animal Kingdom.)

It’s at this Terminal where guests arriving can unload their belongings and travel through the pre-show into the Halcyon’s atrium. Those traveling to Batuu will be transported via heavily modified buses known as intergalactic transports, which will depart from a launch pod off the side of the main building. As far as parking goes, a limited number of on-site parking will be available for guests, with a driveway leading out to the parking lot at Disney’s Hollywood Studios. Here’s how Disney describes the arrival experience for the Starcruiser:

On the ground, parts of the Starcruiser can be seen along the guest roads surrounding the perimeters of Disney’s Hollywood Studios. You can see the main building of the hotel surrounded in purple siding.

Here, you can see parts of the Terminal, with vertical triangular concrete pieces jutting out from the exterior wall (also seen in the concept art and aerial image.)

With dense foliage expected to cover up most of the main buildings, we don’t expect these walls to receive much exterior theming.

In the photo above, that rounded metal archway off to the left of the main building is where the buses––I mean, intergalactic transports will depart to Batuu. You can get a more in-depth look into the immersive guest transport system here.

You can see that the hotel design follows the blueprints shown back in August almost identically. The main lobby atrium leads to the long, rectangular guest area cabins, which have now been closed off with walls:

While it may look like the cabins have windows, each room will offer virtual views out into the galaxy.

On the far right edges of the hotel site are some of the backstage buildings for Star Wars: Galaxy’s Edge. In fact, the hotel’s direct entrance will be located between the Millennium Falcon: Smugglers Run and Star Wars: Rise of the Resistance attractions. It appears the structure will be accessed by way of a small bridge over a drainage ditch. Two roads then lead over to the service building and the resort’s porte-cochère (also known as the Galactic Starcruiser Terminal) respectively.

For an exclusive full tour of floor plans and concept art for the new Star Wars: Galactic Starcruiser, including the hotel lobby layout, guest rooms, and more, click here. For our last aerial construction update on the upcoming Starcruiser, including a look at construction on the Terminal, Intergalactic Transport Stations, and more, click here. And if you’re just about ready to hand over all of your money to Disney, click here for expected pricing for the 2-night, 3-day all-inclusive Starcruiser experience.

Start banking those credits now, because you’re going to need to steal a lot of coaxium to afford to stay aboard the Halcyon. What do you think of the resort’s progress so far? Do you think Disney will be able to achieve a seamless immersive experience?

Next
PHOTOS, VIDEO: Large Crowd of Guests Allowed to Enter Magic Kingdom Without Scanning MagicBands or Tickets Due to Technical Difficulties at Park Entrance This Afternoon