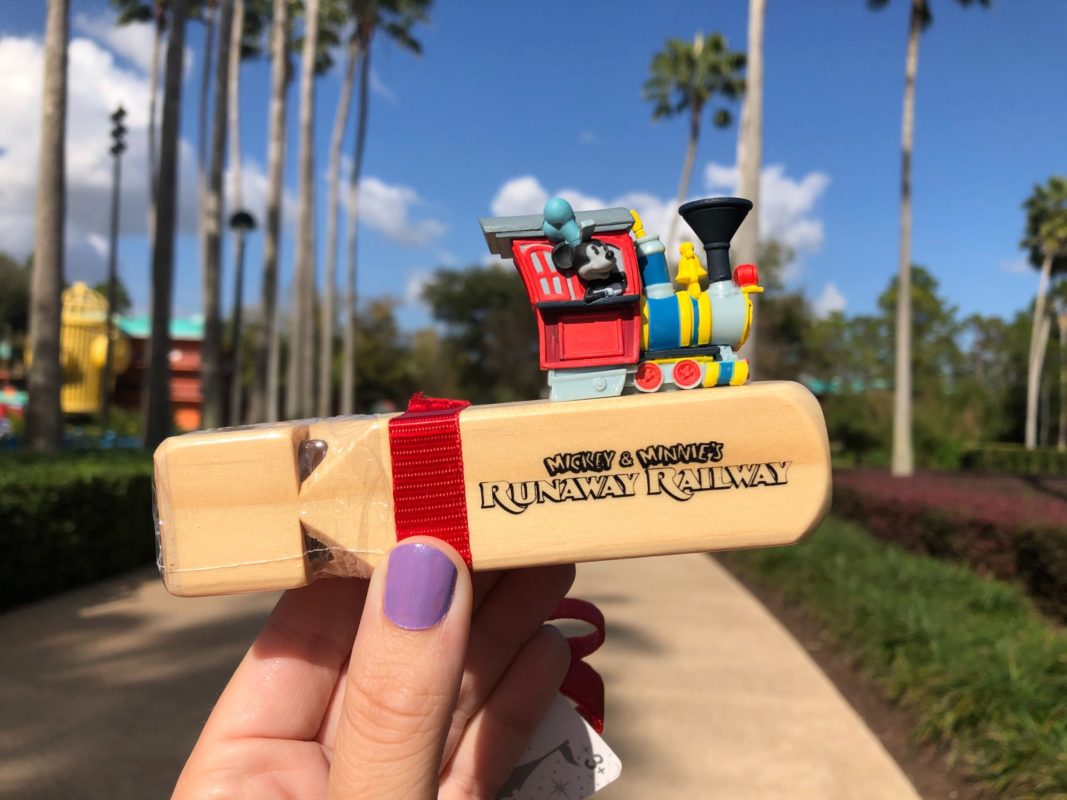 Toot-toot! I’m not sure when selling noisemakers for children at Walt Disney World became a good idea, but with the cute attraction tie-in, I’ll allow it. The second-ever toy themed to Mickey and Minnie’s Runaway Railway has arrived at Walt Disney World, and it’s none other than a toy train whistle themed after the Runnamuck Locomotive in the attraction. 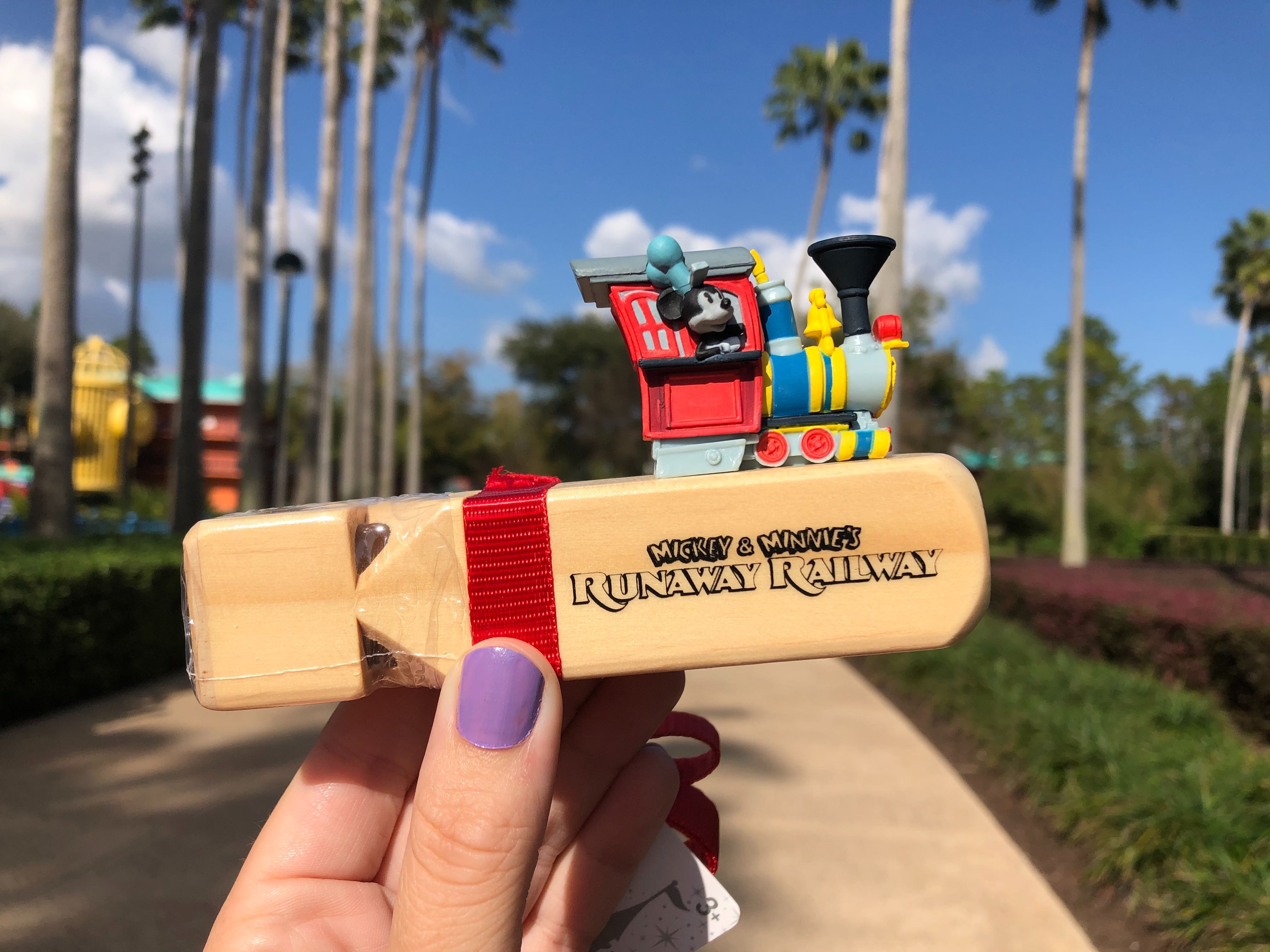 The wooden train whistle features a glossy outer layer stamped with the attraction’s logo. On top, Conductor Mickey peeks out of the engineer’s cabin on the Runaway Railway train. The train itself follows the exact color scheme and design as the one featured in the attraction. Guests will definitely be seeing Mickey on the attraction, however, their engineer will be Runnamuck Employee of the Month: Goofy. 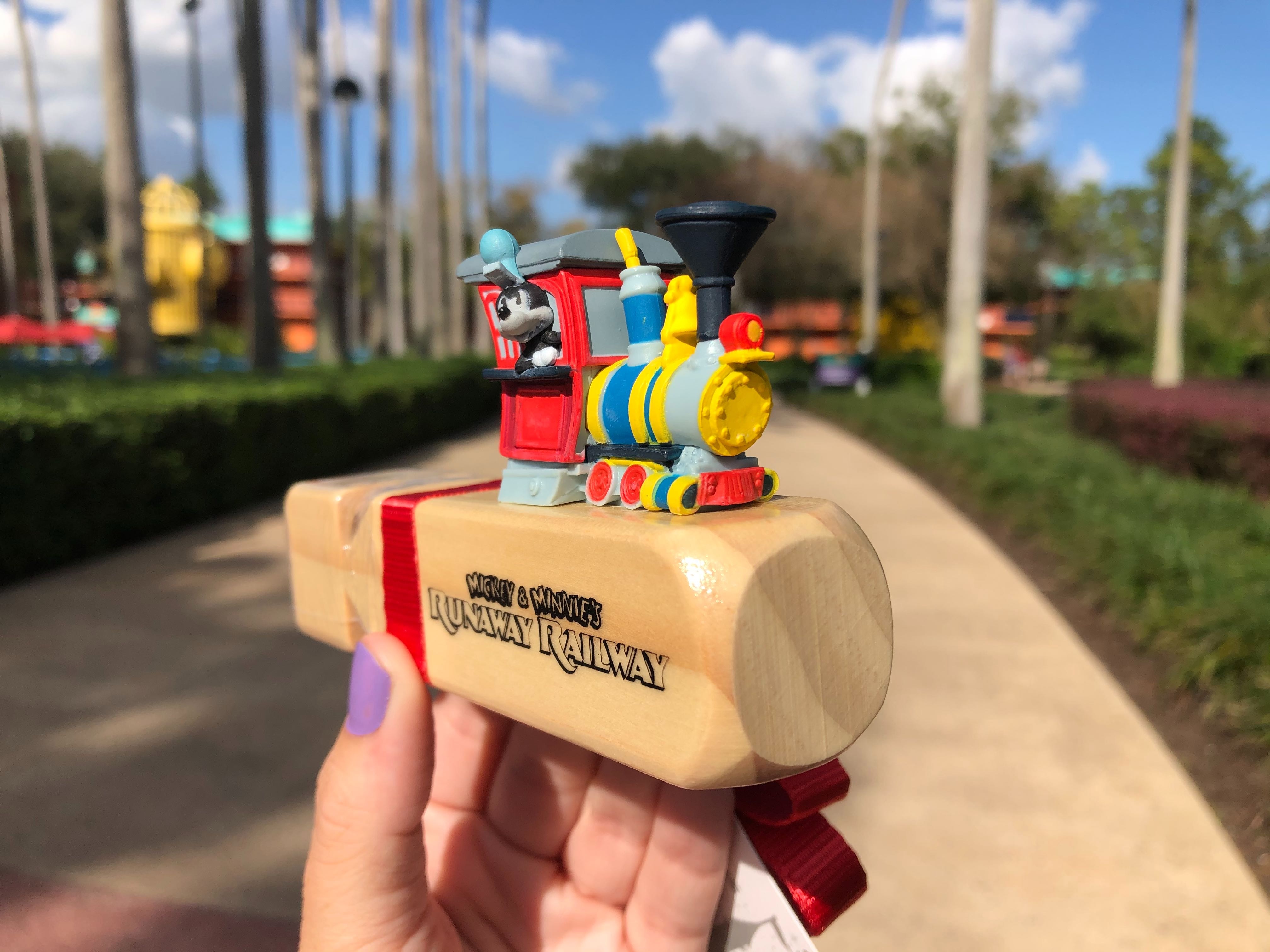 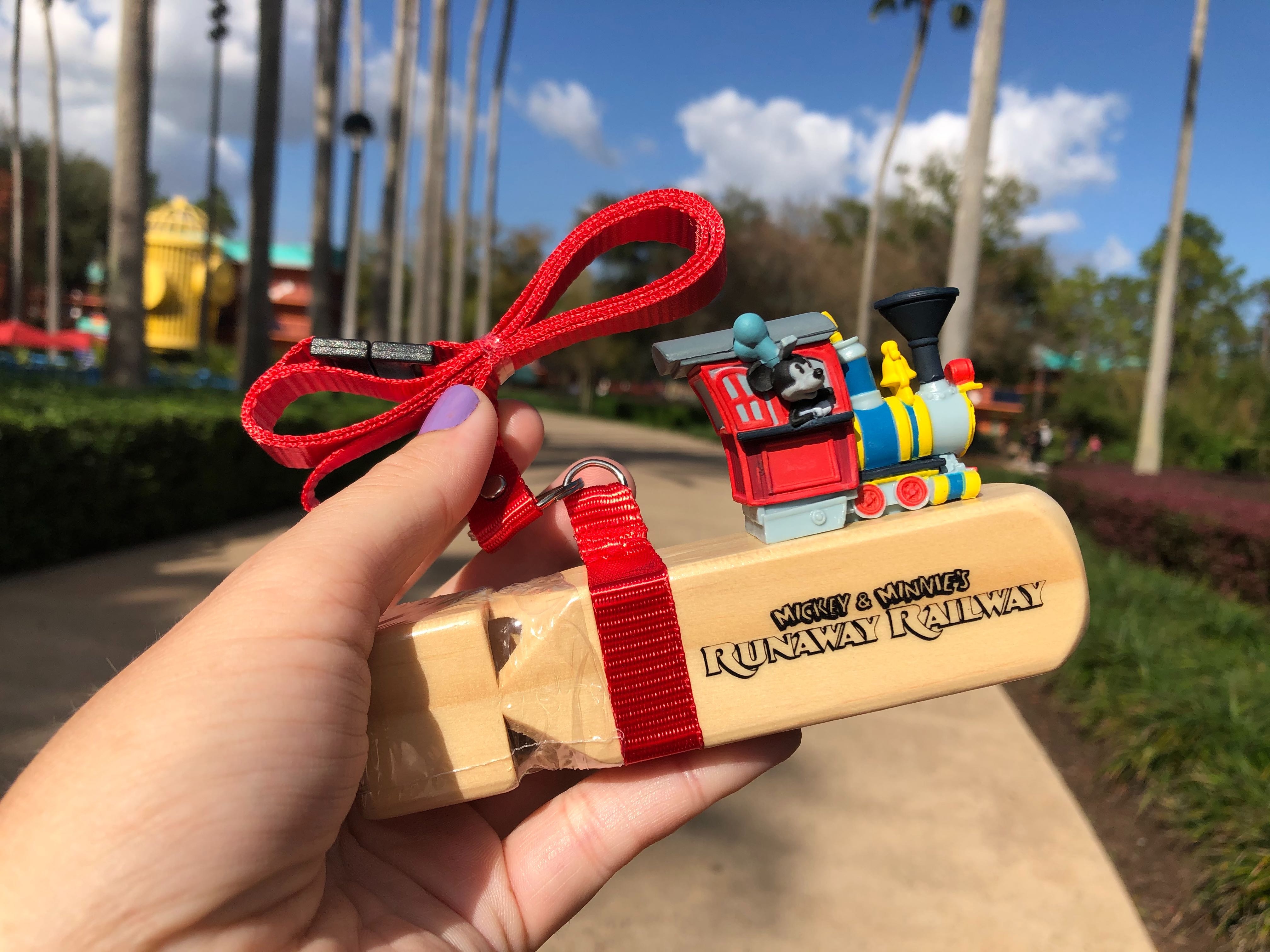 The whistle features a red nylon strap around the body of the whistle, plus an attached, removable neck strap so you can carry the whistle around wherever your zany adventures take you. 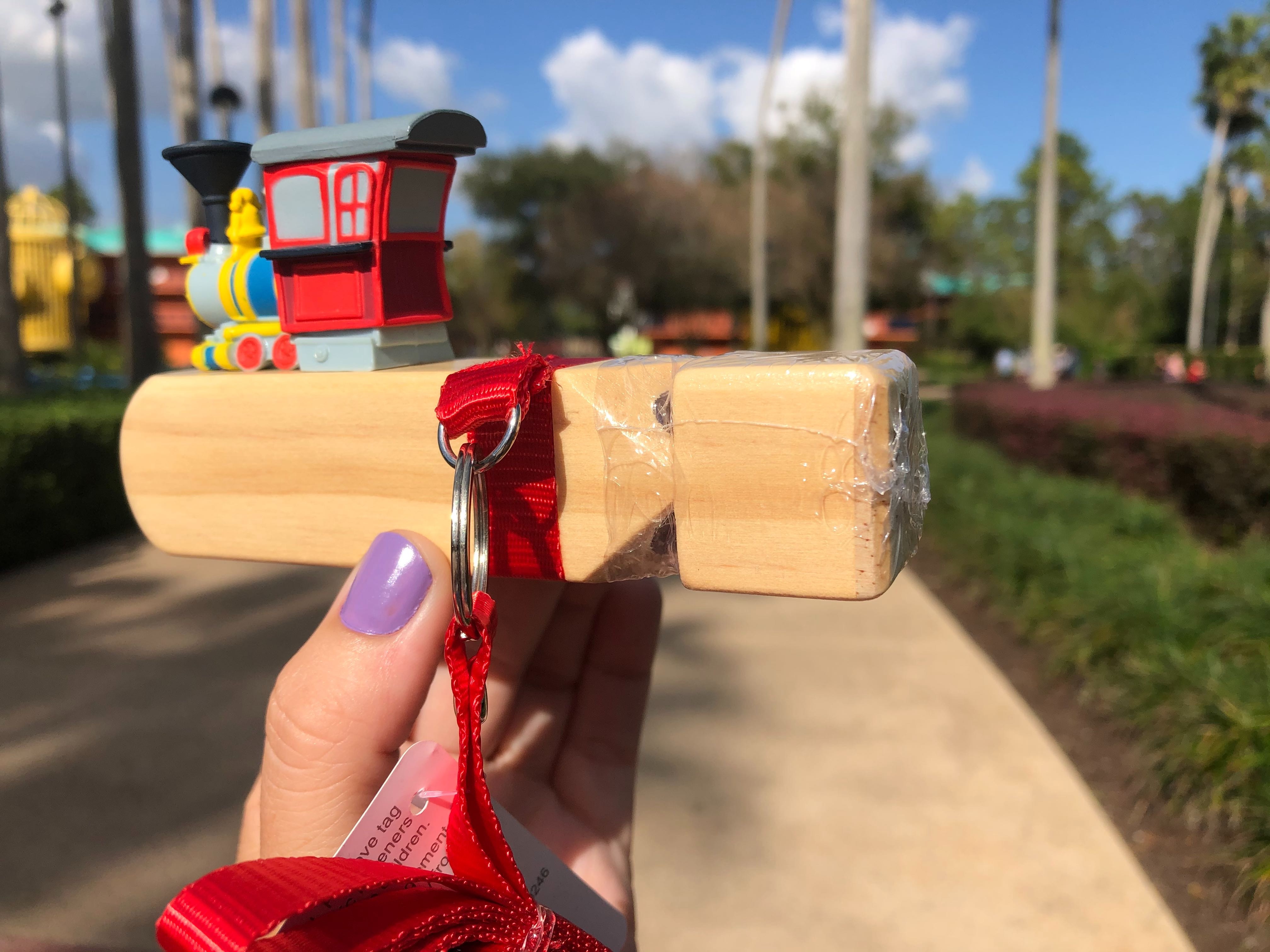 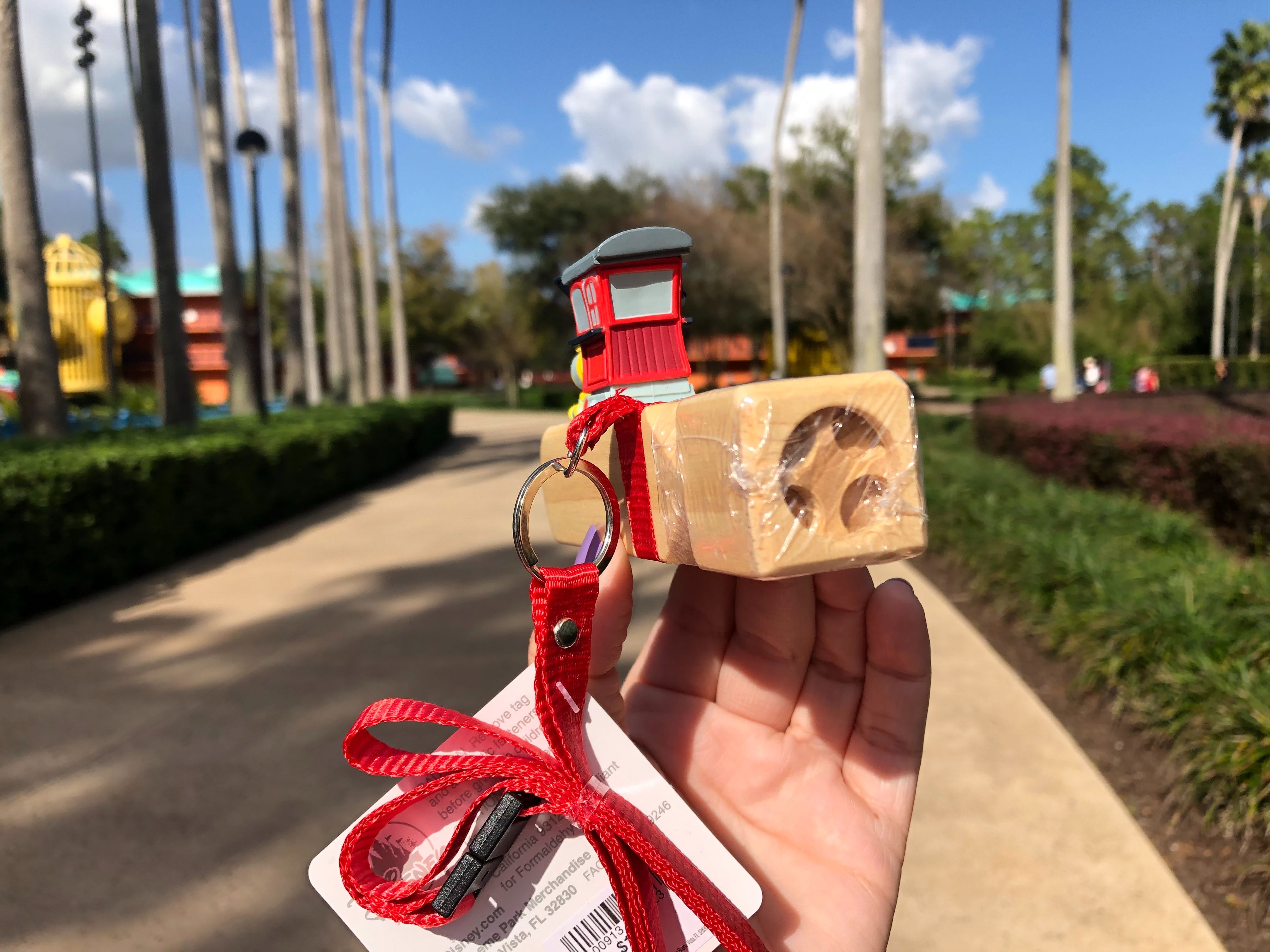 Besides the train connection, there’s actually a connection to a certain steamboat with this specific piece of merchandise, as the same tri-tone whistle used for Steamboat Willie in 1928 was used for the sound of Goofy’s train on the attraction. You can find the new train whistle inside Donald’s Double Feature at Disney’s All-Star Movies Resort. (No, they aren’t available at All-Star Sports.) The toy whistle retails at $12.99, making it slightly more expensive than the toy train that debut a few weeks ago.

Mickey and Minnie’s Runaway Railway opens March 4th, 2020 at Disney’s Hollywood Studios and in 2022 at Disneyland Park. If you can’t wait for either of these attractions, you can check out our full scene-by-scene walkthrough to get a better idea of what they’ll be like. Just yesterday, we got our first sneak peek at the loading area. New Stand-By and FastPass+ signage was also recently installed, so we’re inching closer and closer to Walt Disney World’s second-ever, state-of-the-art trackless ride.