Nostalgia is a huge driver of Disney Parks merchandise worldwide right now. So much so that this winter’s special event at Tokyo Disneyland celebrates past entertainment at Tokyo Disney Resort. Very Very Minnie is on January 10 – March 19, and there’s tons of food to explore. So let’s go!

Center Street Coffeehouse in Tokyo Disneyland’s World Bazaar is highly regarded by many visitors for its French toast breakfast. Alas, I’ve never dined here for breakfast, so I can’t comment. But when I saw this adorable dessert plate for Very Very Minnie, I knew I had to brave the line. So, let’s take a look at this massive plate of sugar together! Keep in mind this is available only between 1 and 6 p.m. 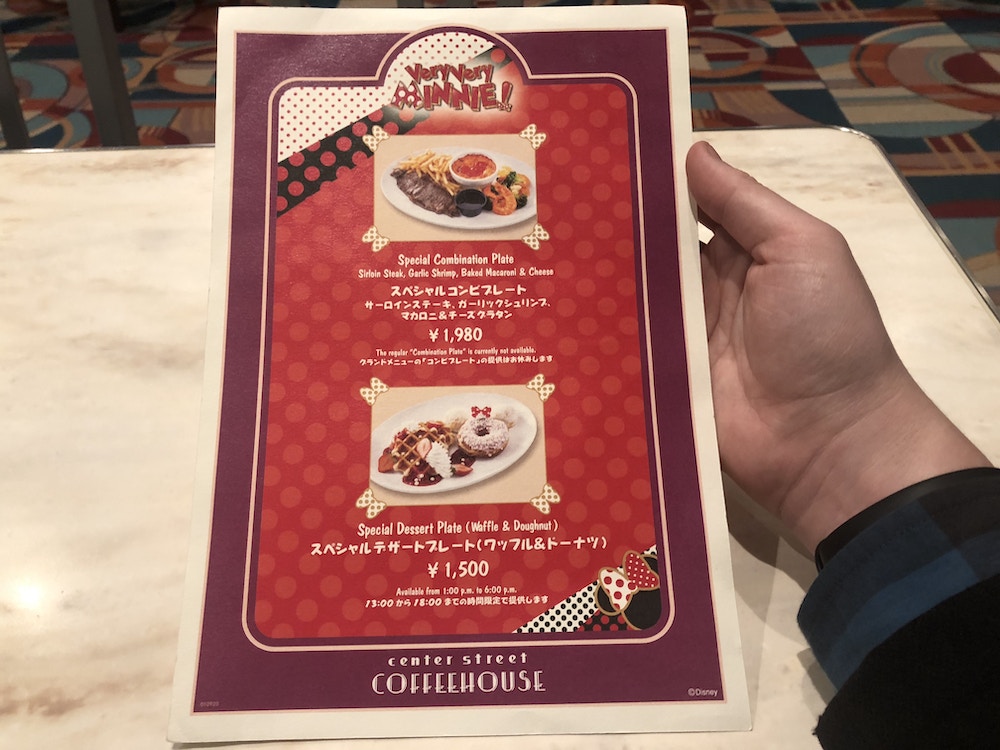 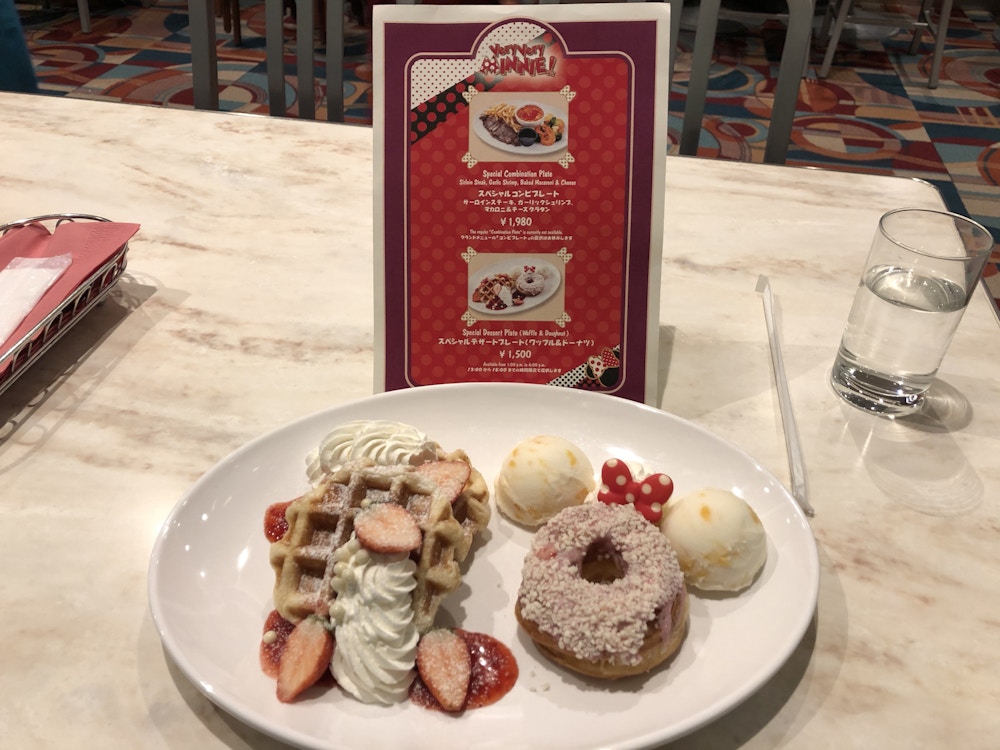 There are times when I dine at Tokyo Disney Resort and wonder exactly how much sugar is in something I eat. There’s so many sweets here, you can never really be too sure. And this glorified plate of sugar was certainly no exception. Featured on this plate are a cream-filled strawberry donut flanked by two milk ice cream scoops with pieces of orange, and two waffles with strawberries and lots of whip. Sounds like a FastPass to high blood sugar, if you ask me. So let’s break it all down. 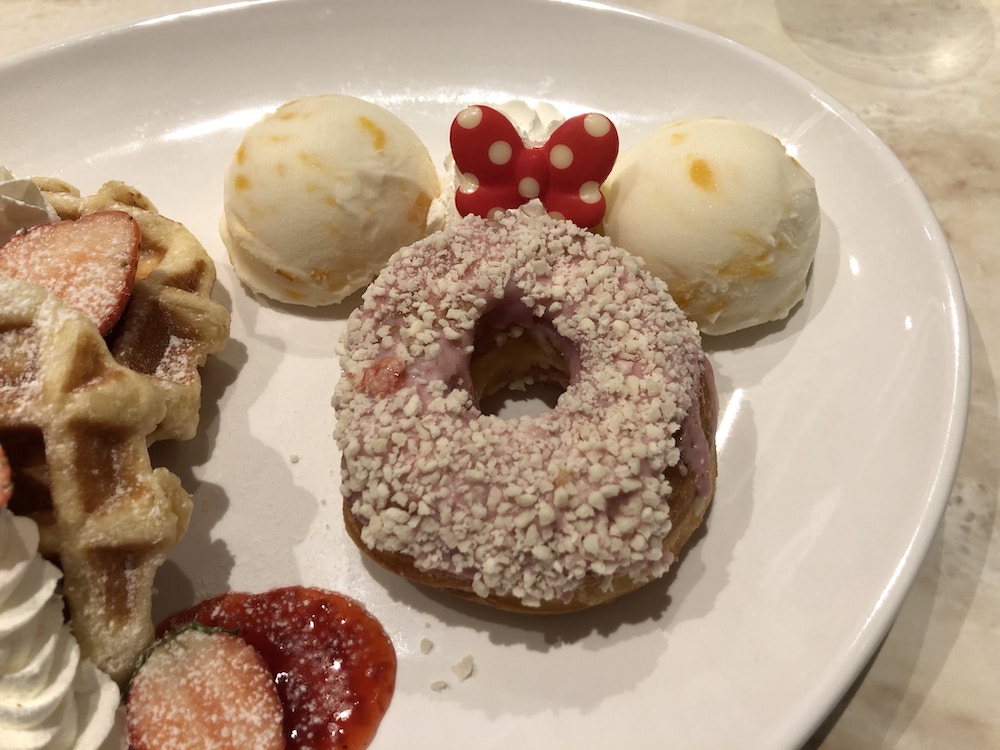 On the right side of the plate, you’ll find the donut and ice cream. At the center is a strawberry donut with cream filling. I say “strawberry,” but it’s difficult to taste it behind the cream filling inside. It really does explode out a bit when you take a bite. Not a bad donut, but you can get something along the same lines at Ikspiari’s Krispy Kreme for ¥250 or so.

Forming the rest of the Minnie silhouette are two scoops of citrus ice cream, whipped cream and a white chocolate bow. This is the same super-sweet white chocolate bow you’ll find on the special souvenir desserts, actually. As for the ice cream, there isn’t much flavor to it. It’s milk-flavored, which is the Japanese standard for general flavor — sort of like vanilla in U.S. ice cream flavors. The citrus bits add a bit of fruity flavor, but not much. 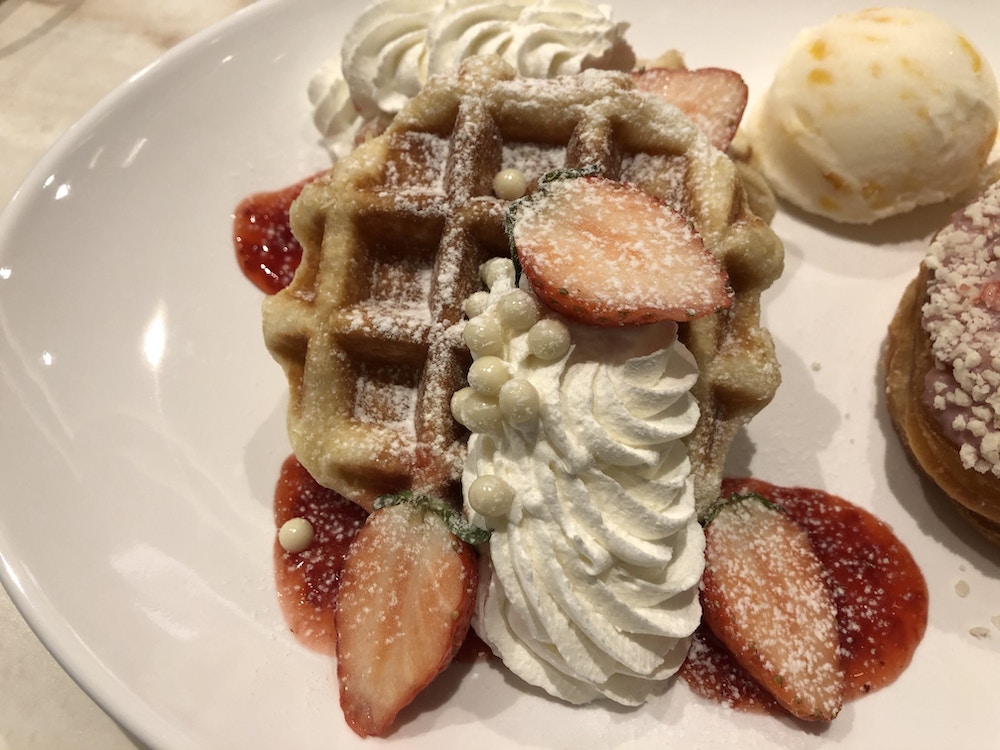 I feel like dense waffles must be a thing here. Cold, dense — but not stale — waffles were also part of the special Duffy’s Heartwarming Days cup desserts. Since this portion is a bit more substantial, you’ll probably want your knife to eat these. While I would’ve rather had a bit more strawberry sauce (or some maple syrup), I did enjoy these. 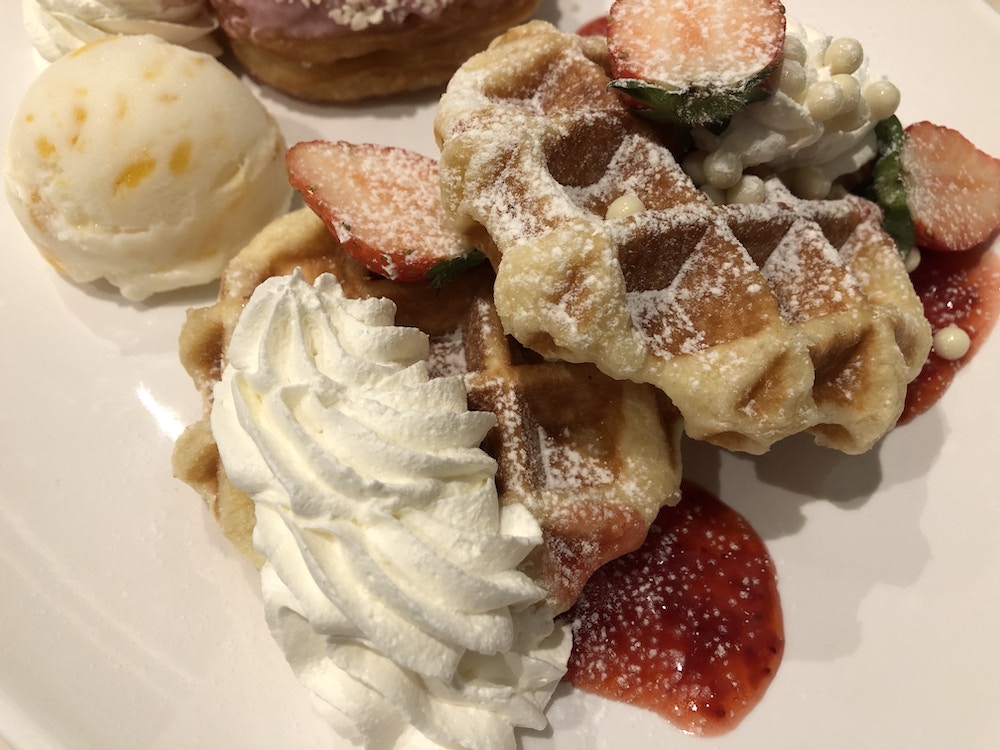 All in all, I wouldn’t recommend paying nearly $14 for this plate, but at least what it came with wasn’t that bad. There’s far better sweet treats you could spend less money and time on, and I highly recommend you do. “A” for effort here, but “C” for results.

The Special Dessert Plate is available from 1 until 6 p.m. through March 19 at Tokyo Disneyland’s Center Street Coffeehouse. If you choose this, it won’t disappoint. But it won’t amaze, either.

Are you considering or planning a visit to Tokyo Disney Resort? Visit TDRPlans for every detail (and more) that you’ll need to make your trip the best it can be! Did I mention it’s 100% free? Oh, and stay tuned to WDWNT for up-to-date news on Tokyo Disney Resort, Walt Disney World and Disney Parks worldwide!