The bakers at the Disneyland Resort have worked their magic to bring you a brand new cupcake themed to Fantasia‘s Sorcerer Mickey! 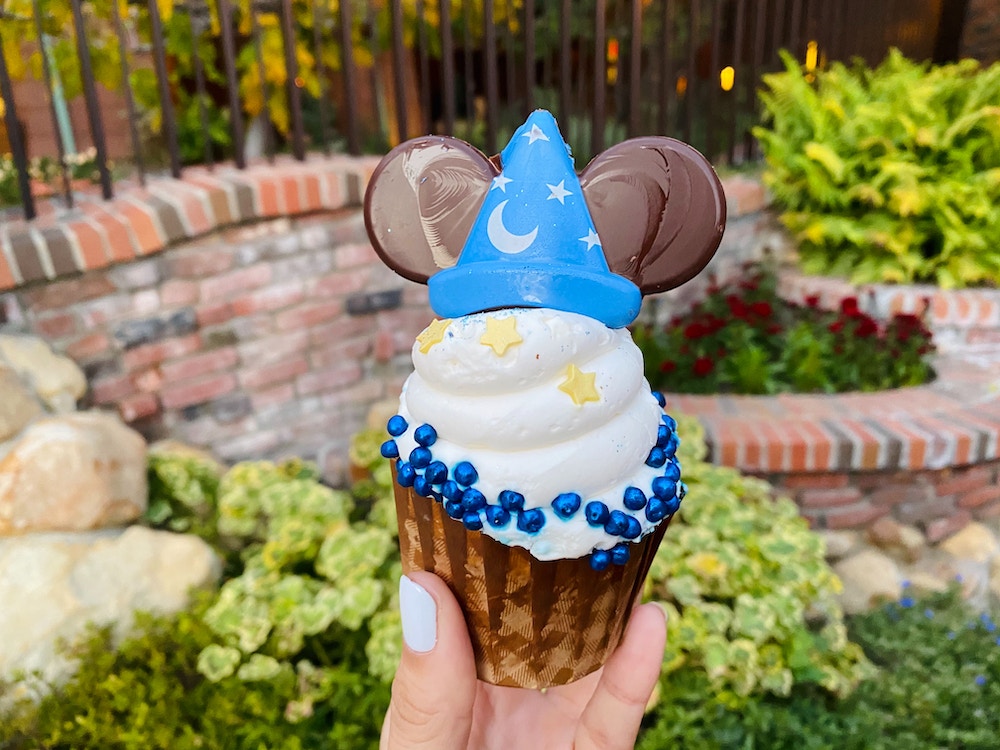 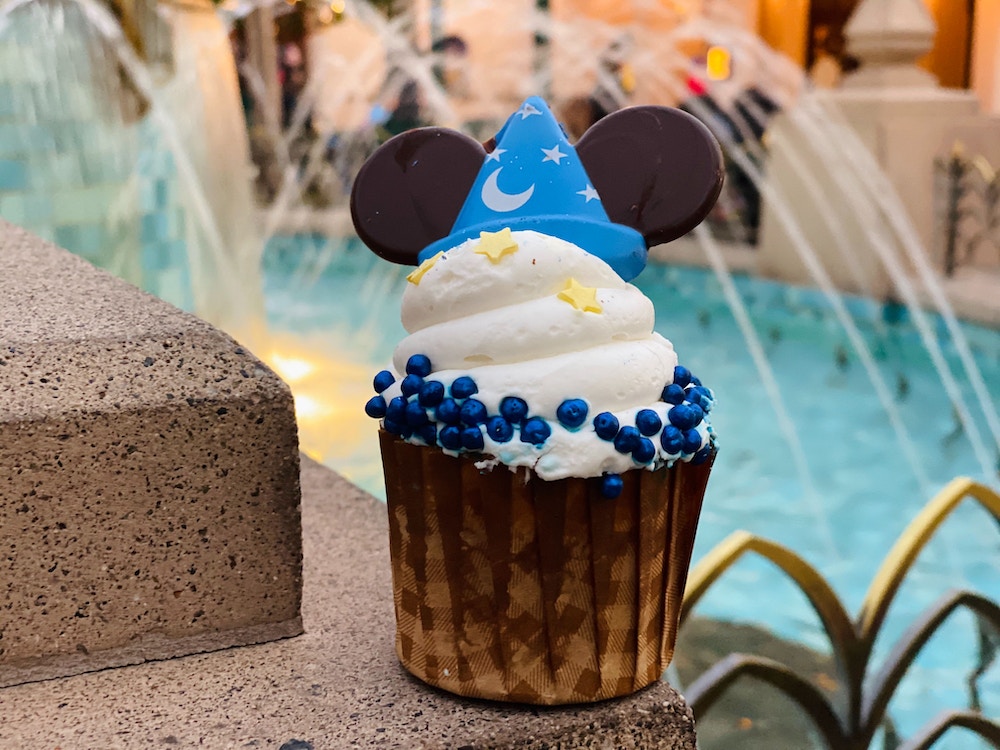 This is a very photogenic cupcake. In fact, we thought we’d take it into Disney California Adventure for some pictures before we ate it! 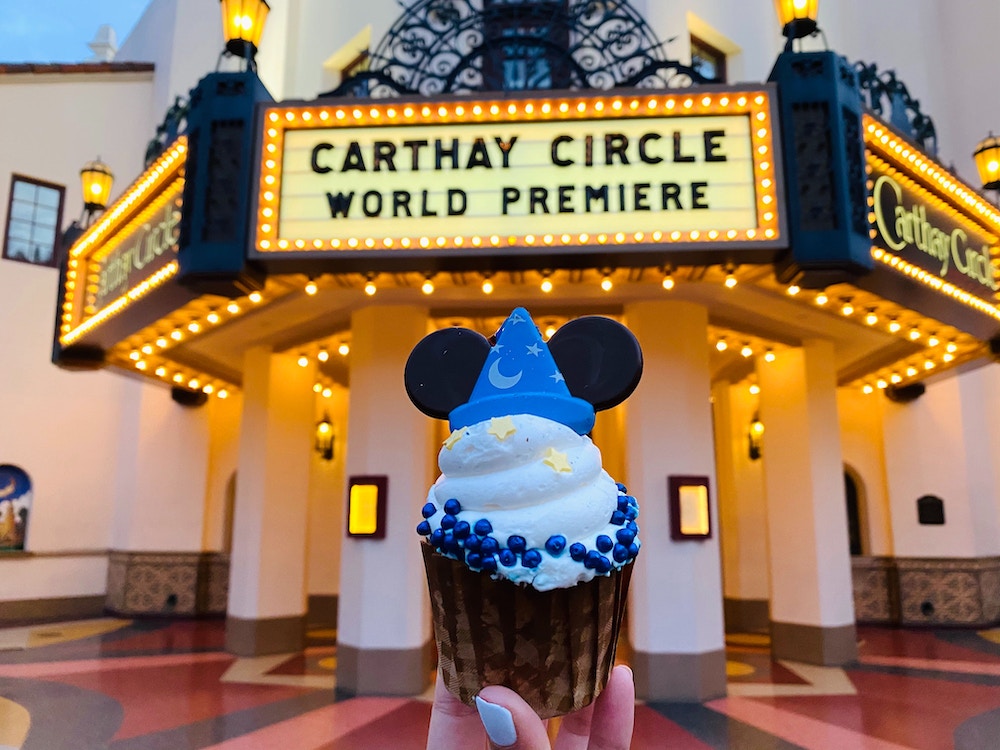 Let’s be honest: when you have a cupcake themed to one of Disney’s most groundbreaking films, it deserves a world premiere. 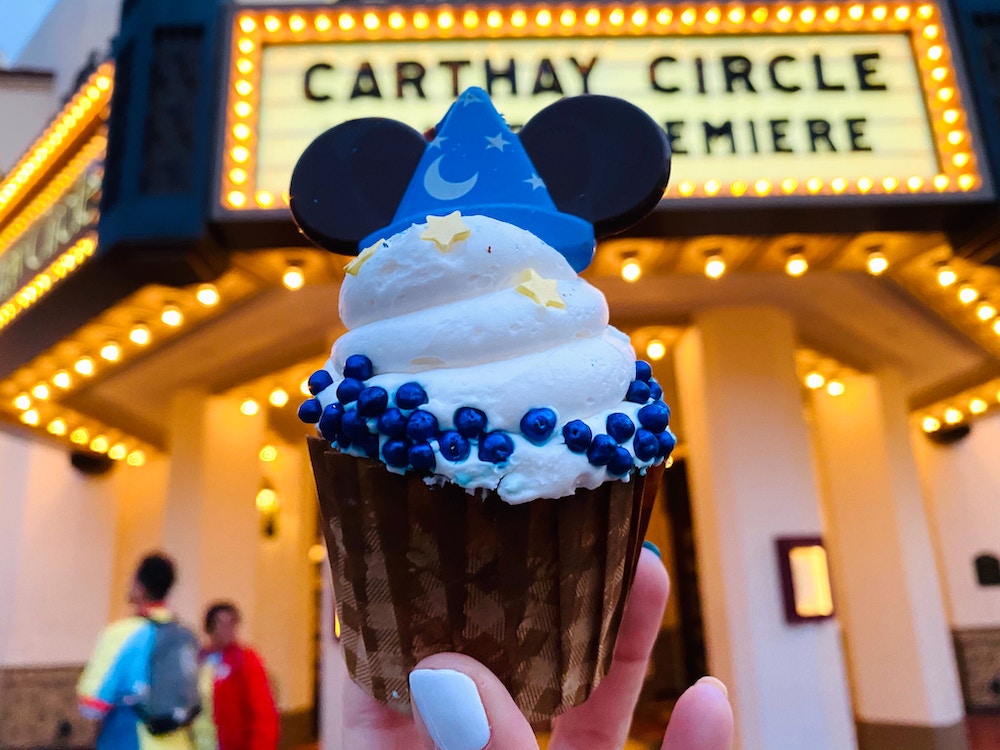 Visually, this cupcake was very enticing. The whipped frosting with shimmering blue sprinkles made for the perfect spot for Mickey to rest his milk chocolate hat. 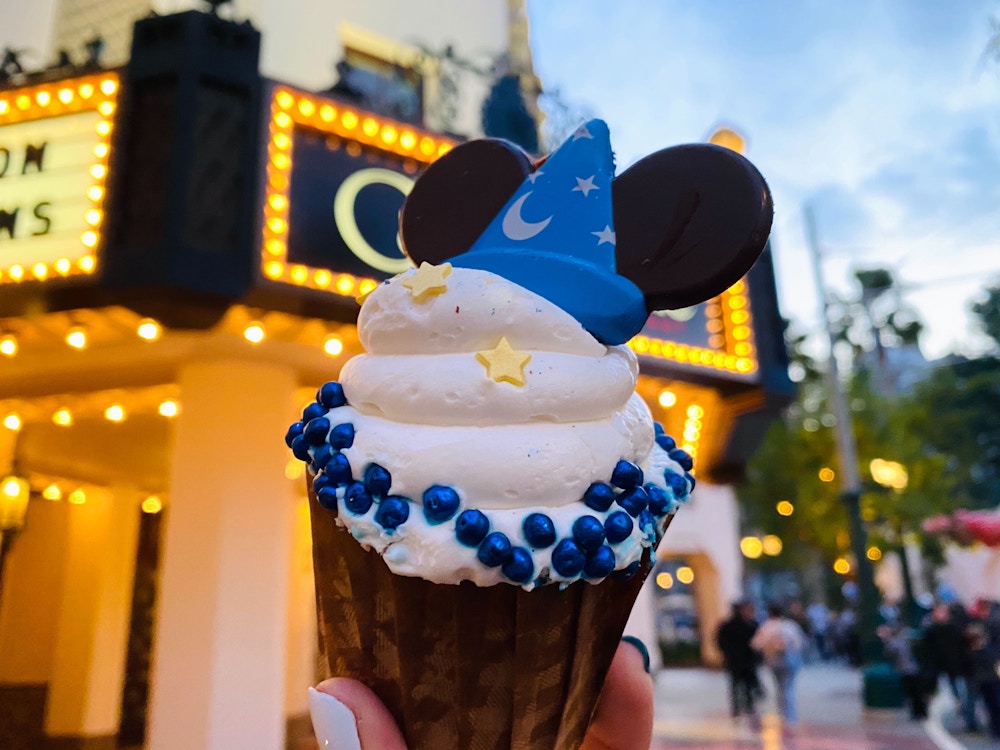 Seeing this cupcake in the marquee lights reminds me of sitting on the couch, watching “The Sorcerer’s Apprentice” section of the film with the lights low. 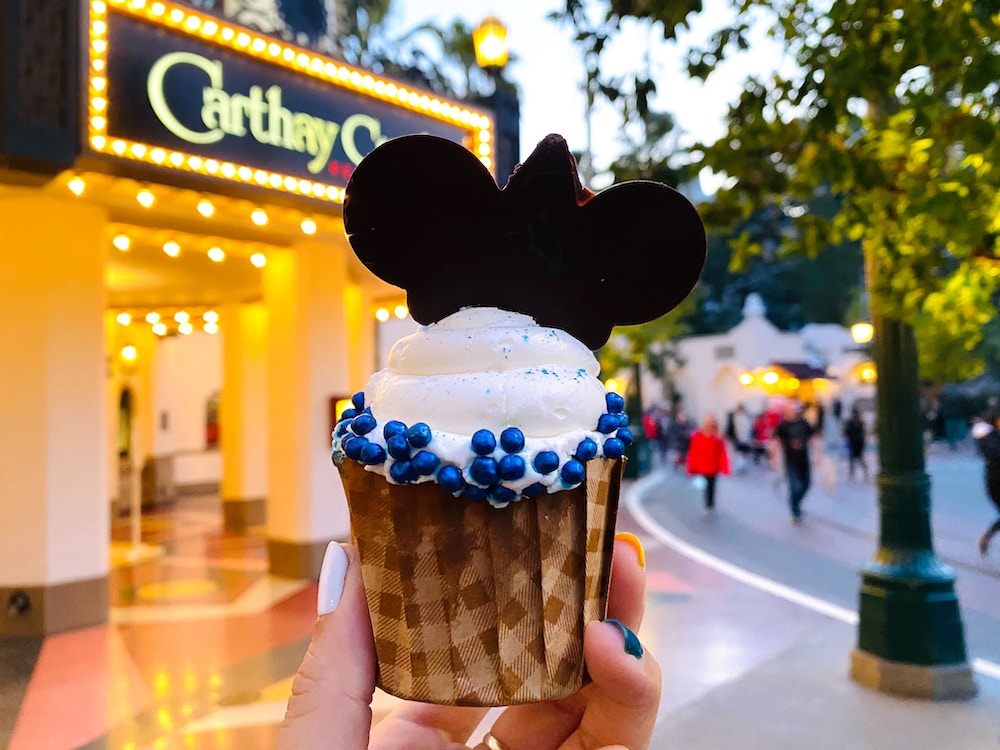 Here, you see that the hat and ears are all one chocolate piece. 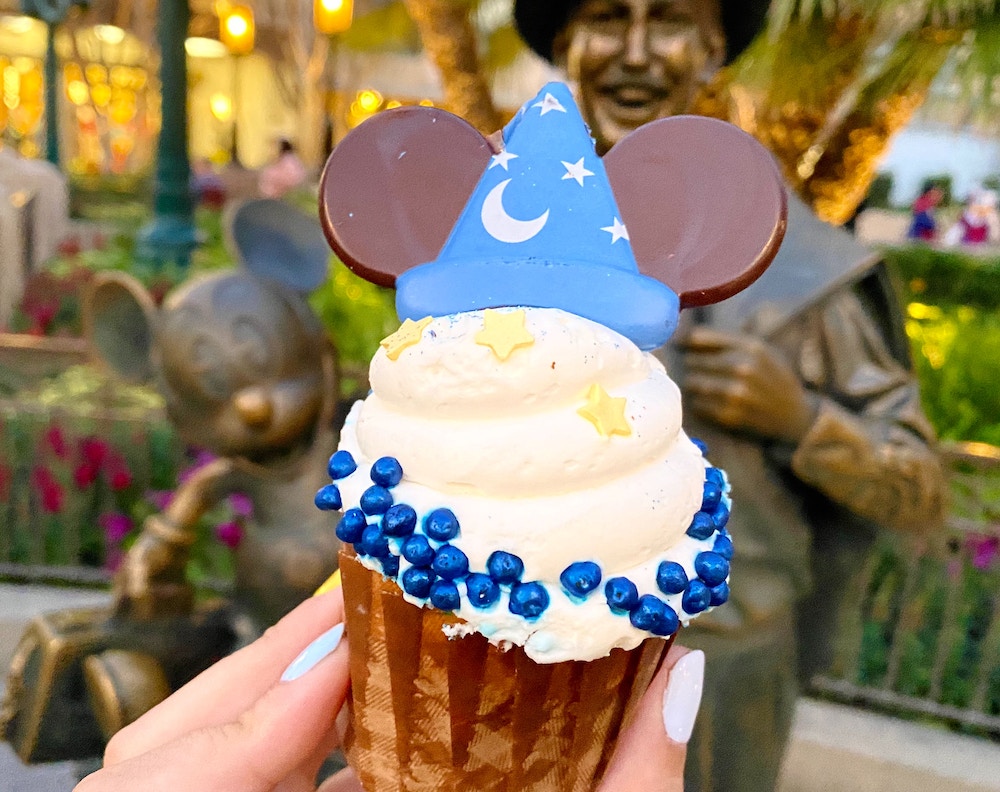 But all in all, this cupcake looks best hanging around Walt and Mickey. But now, let’s eat! 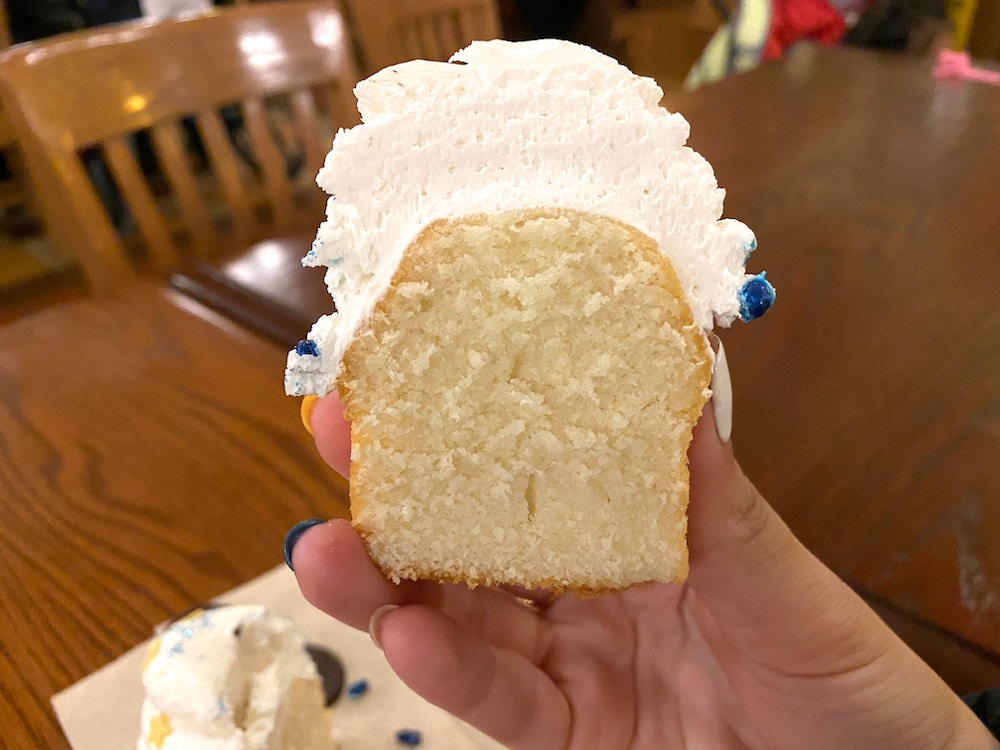 While it’s a very unique-looking treat, it tasted like a very ordinary vanilla cupcake. The cakes itself is very moist and dense with a sweet taste. The frosting is light, but there was a lot of it, so be prepared: you may want to eat some of the frosting separately before getting into the cupcake. The circular sprinkles added extra texture to the soft treat. 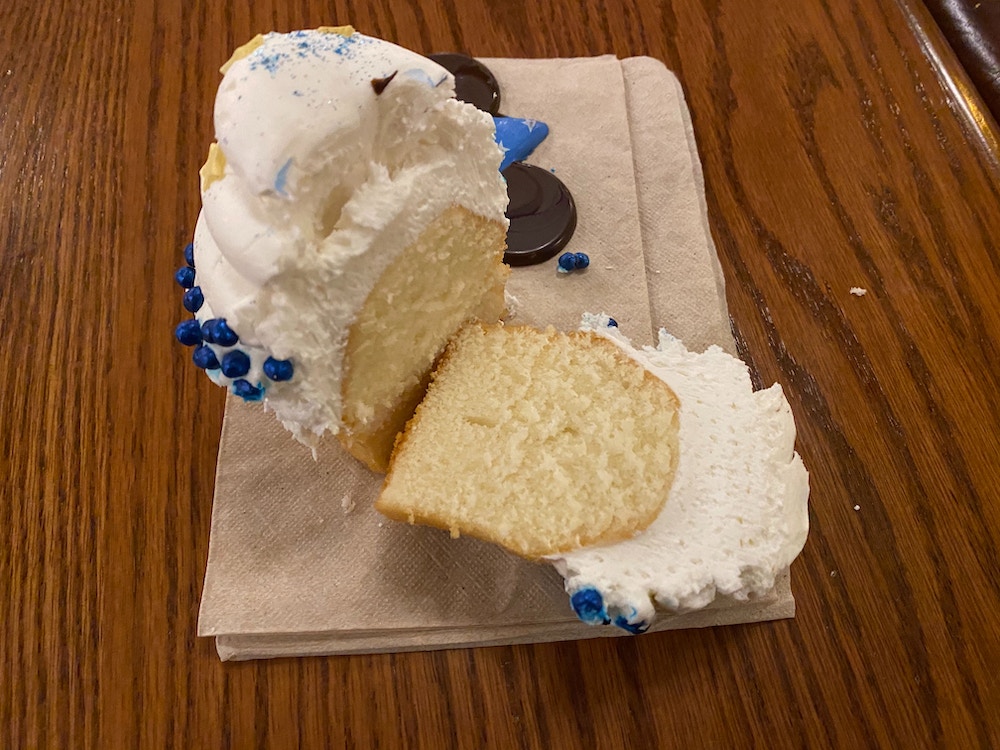 If you’re looking for a basic cupcake, this would be a good option, especially for picky eaters or people who love taking pictures of food. It’s both simple and beautiful!

And if you are looking for this cupcake, you can find it at GCH Craftsman Grill, where it sells for $7.00.

Does this cupcake cast a spell on you, or is it time to break out the brooms and sweep away basic cupcakes? Let us know in the comments below!