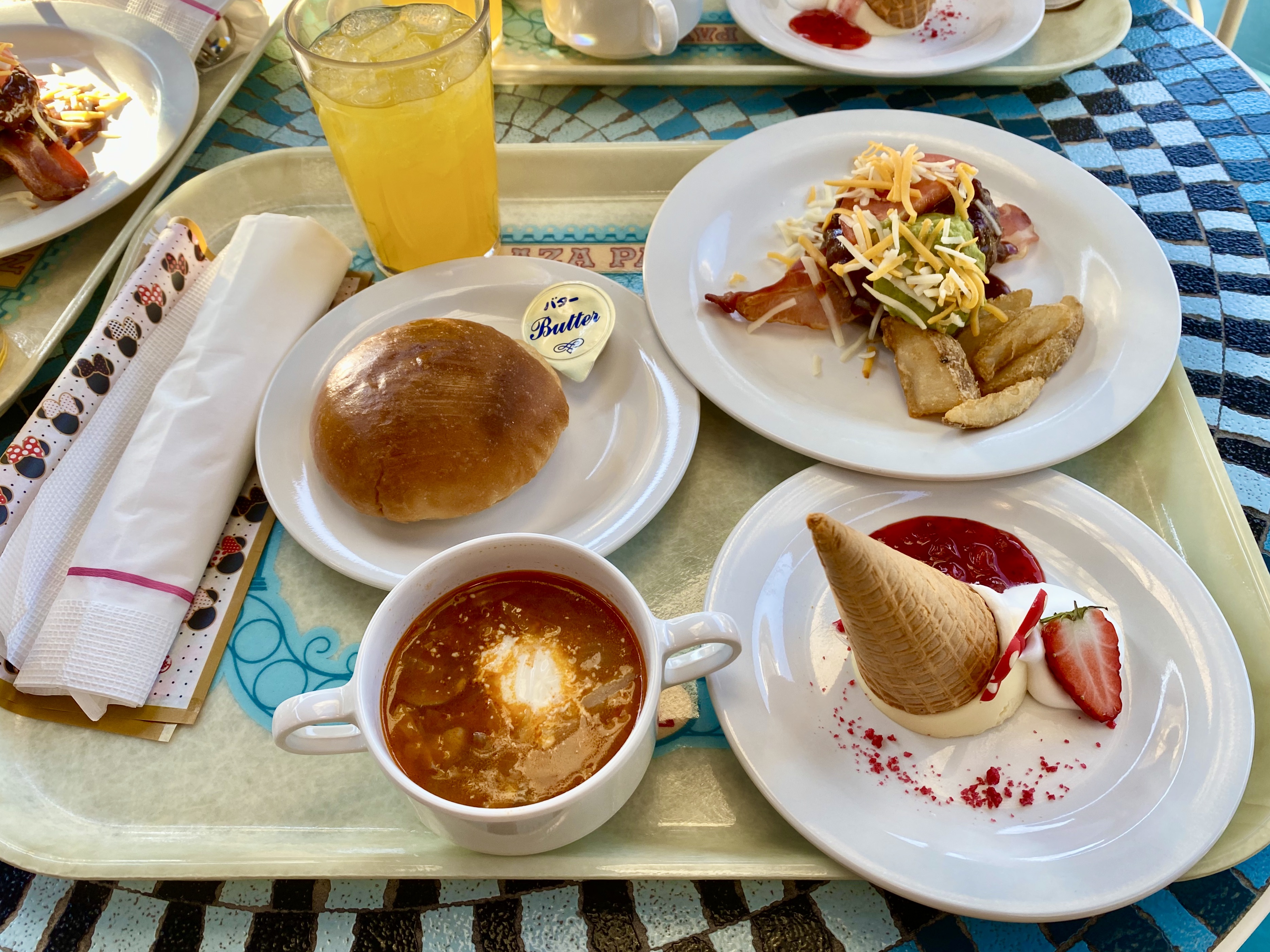 Nostalgia is a huge driver of Disney Parks merchandise worldwide right now. So much so that this winter’s special event at Tokyo Disneyland celebrates past entertainment at Tokyo Disney Resort. Very Very Minnie is on from January 10th through March 19th, and there’s tons of food to explore, so let’s go! This Very Very Minnie special set at Plaza Pavilion is surprising in a few ways, and defies some expectations you might have. Before we begin, I should note that this meal was provided to us by Tokyo Disney Resort for review. 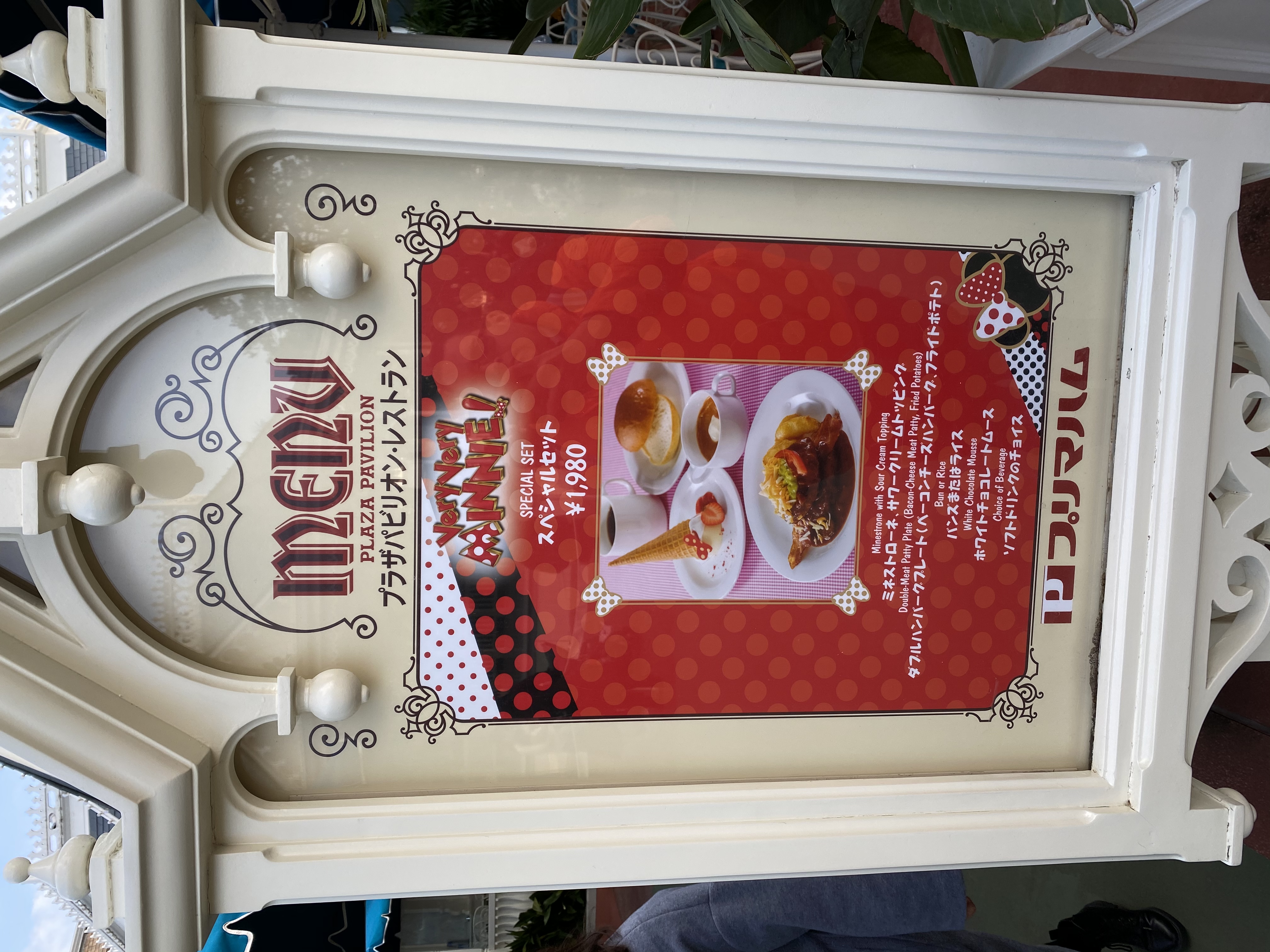 Like other buffeteria sets, this set comes with three courses, plus bread. Let’s go through each (except the bread) and I’ll share my thoughts. 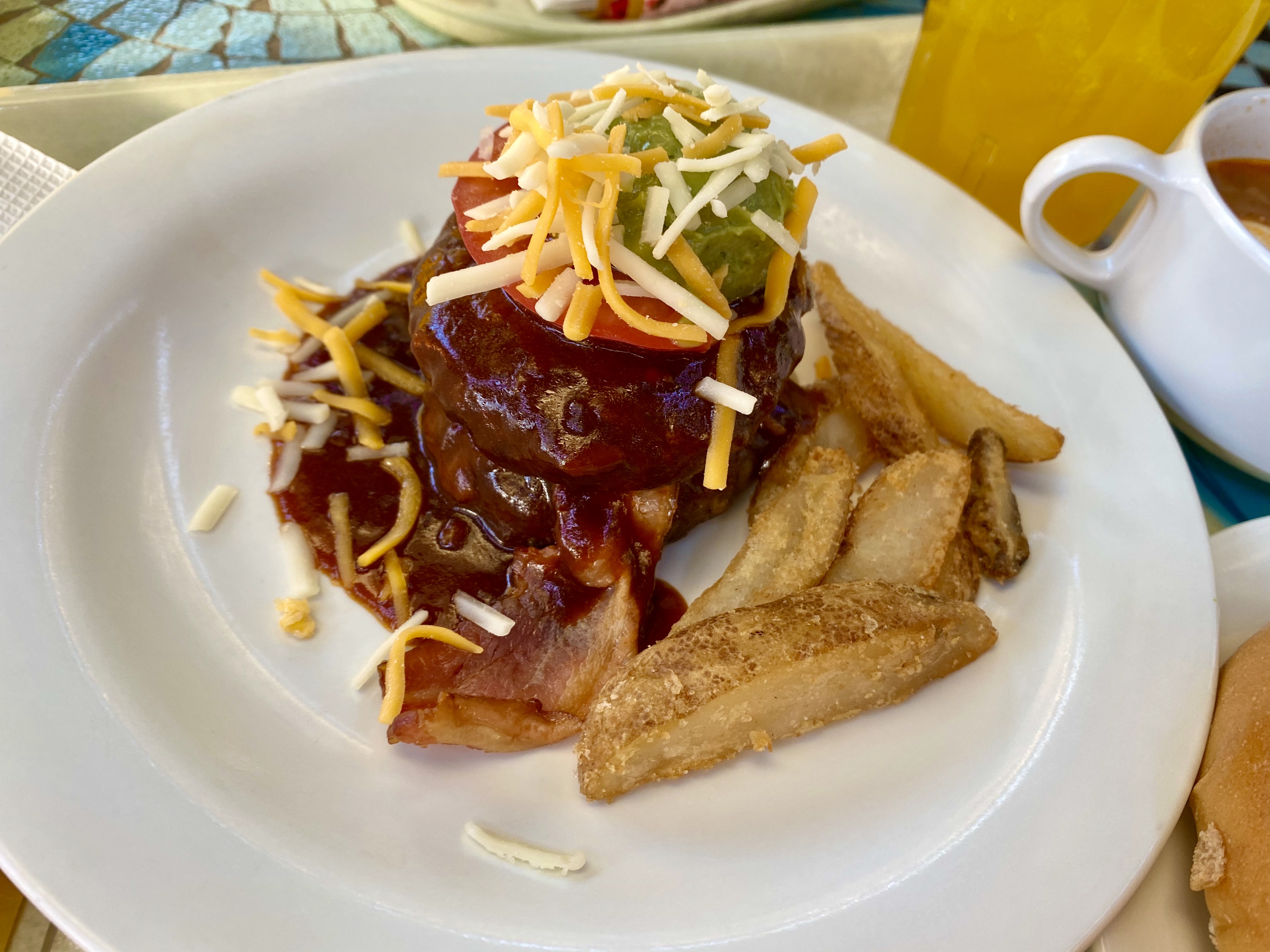 How do you put American food and Tex-Mex on the same plate? Throw some guac and bacon on, of course! This was actually quite interesting. I couldn’t quite put my finger on the sauce but it had a bit of tang to it, and I loved the way it mixed with the guacamole. The meat patties were a bit stiff and needed a knife to cut them, but still fairly juicy as always. Those potato fries needed a bit more salt, but were otherwise fine. Try to eat them on their own rather than mixing them with the sauce. If you’re an intrepid person (as we were not), you can also take your bread roll and throw these between two halves to create a burger. Seriously, it’s actually encouraged! This was certainly a unique twist on the normal concept of meat patty at TDR, and I enjoyed the results. 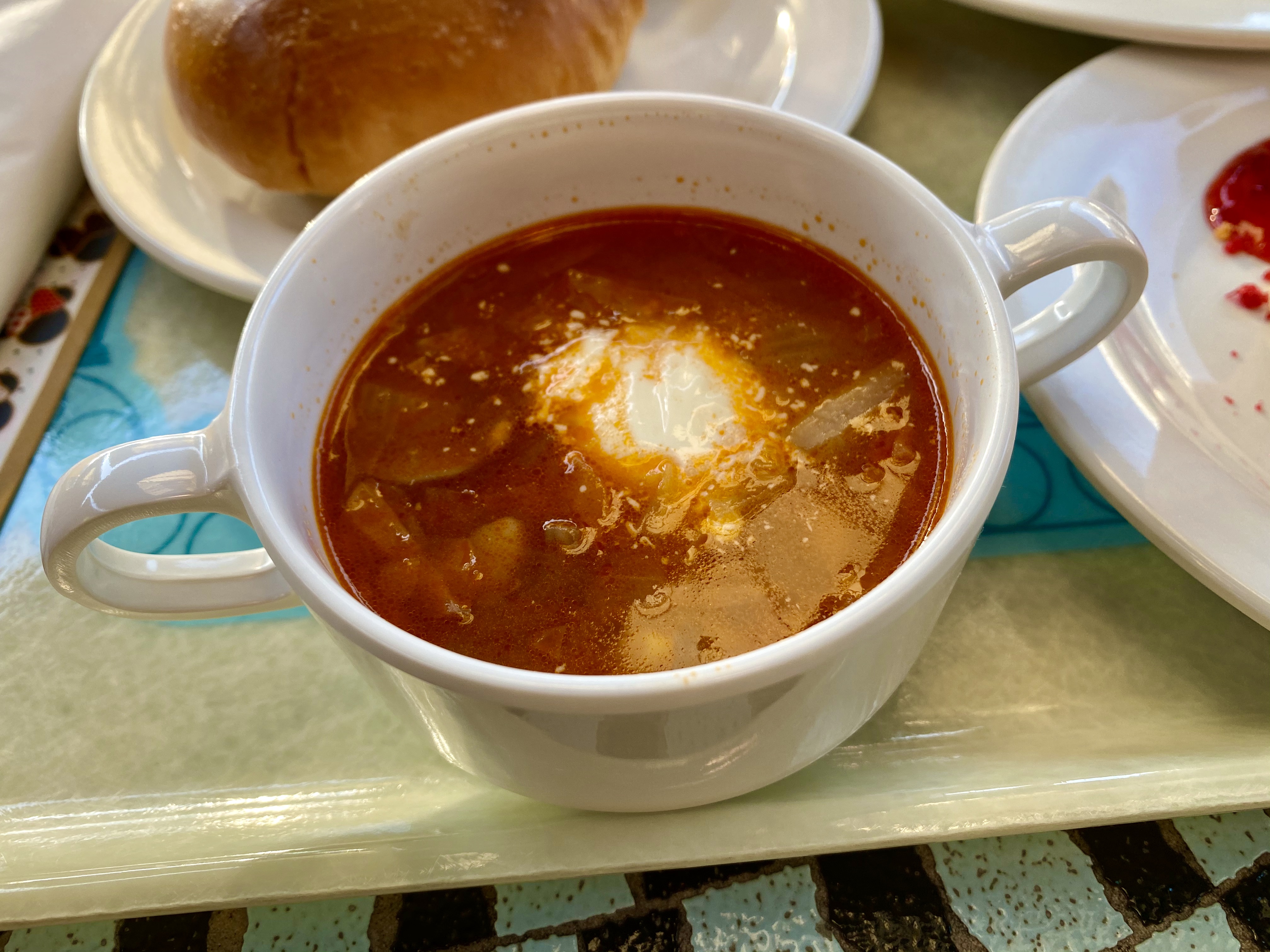 The soup here was something else. I may be just uncultured, but I’ve never had sour cream in a tomato soup before. And it changes the whole thing! The minestrone was delicious with a robust flavor. But after I stirred in the sour cream, it truly was excellent. 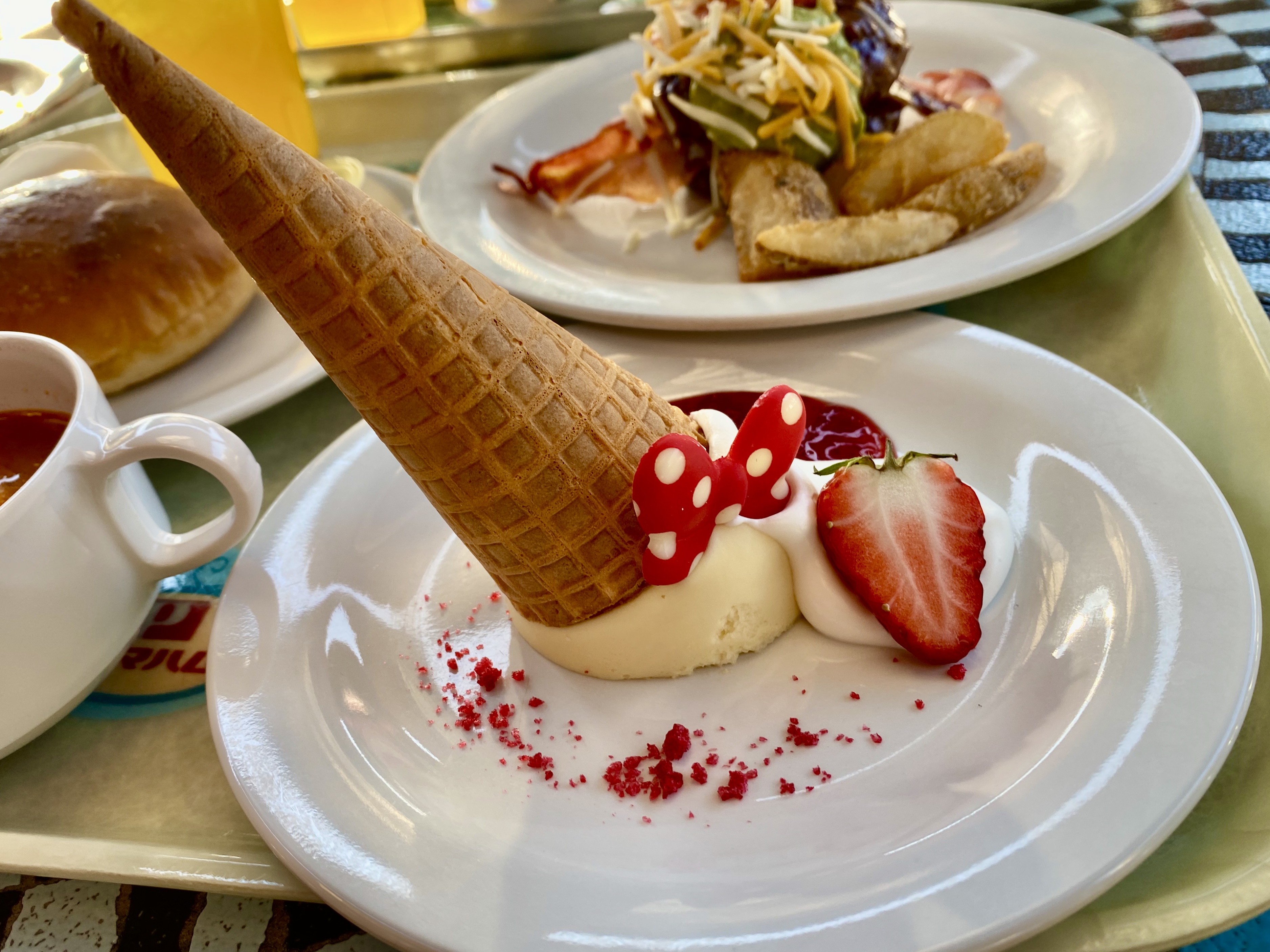 The look they’re clearly going for here is dropped ice cream. And it’s convincing enough to break your heart, honestly. That mousse looks a lot like vanilla ice cream! And for sure, it lies on the subtle flavor end of TDR sweets, as I’ve been talking about for these reviews. The mousse is light and fluffy, with slight chocolate hints. But it mostly tastes like vanilla. If you want white chocolate flavor, eat that adorable candy Minnie bow and you’ll get a significant flavor! To give the mousse a bit more flavor, try and get some of that berry sauce on there and be rewarded with subtle chocolate mixed with strong fruit notes. And of course, don’t forget that waffle cone! There’s no other way to finish off your ice cream than scarfing down the cone it came on, even if it fell over.

Plaza Pavilion stands alongside Horizon Bay at Tokyo DisneySea in serving a meat patty-centric special set. I’ve always been a fan of these, particularly the soups. And like the Pixar Playtime set at Horizon Bay, the soup is where this meal gets interesting. I enjoyed this meal, and I’d probably get it again. But after a whole day of eating tons of food, we were feeling full by the end of this. If you’ve enjoyed these, we’ll be eating several other special items! So keep your eyes on WDWNT through the next couple of weeks and beyond!