Friends forever, glad we’re all here together! That’s right, it’s Pixar Playtime one last time at Tokyo DisneySea! And that means not just special food, but food themed to beloved Pixar franchises! This special set features Finding Nemo motifs, since it’s across the way from the Nemo & Friends SeaRider. The Special Set at Horizon Bay is usually a solid choice, and this is no exception. So let’s dive in! Before we do, we should note that this meal was provided to us by Tokyo Disney Resort for review. 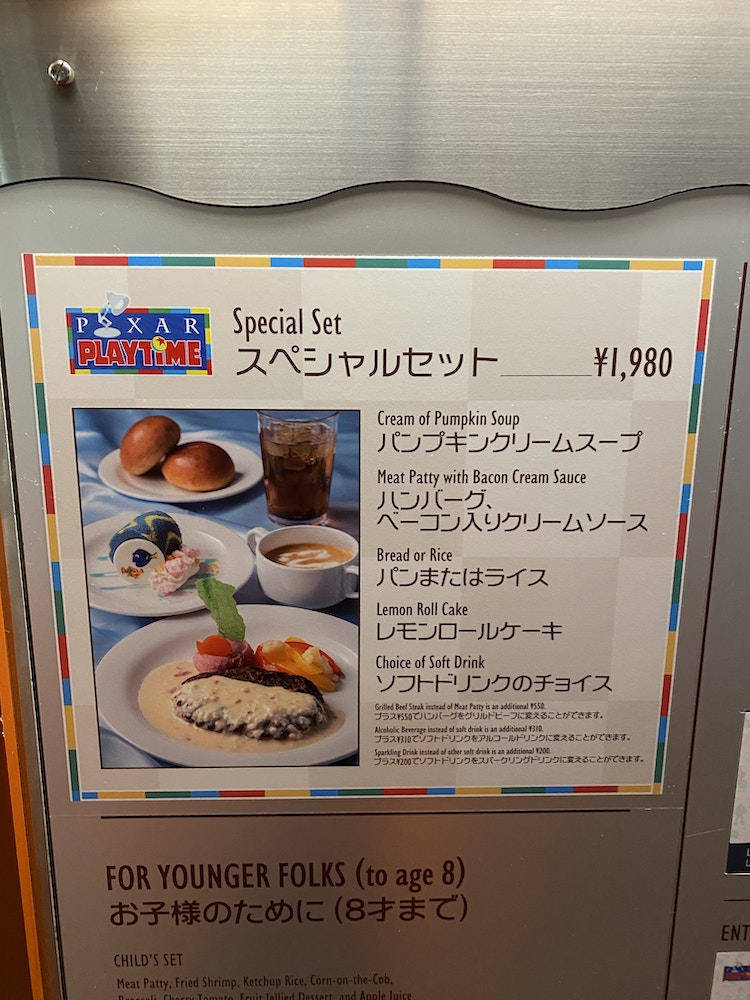 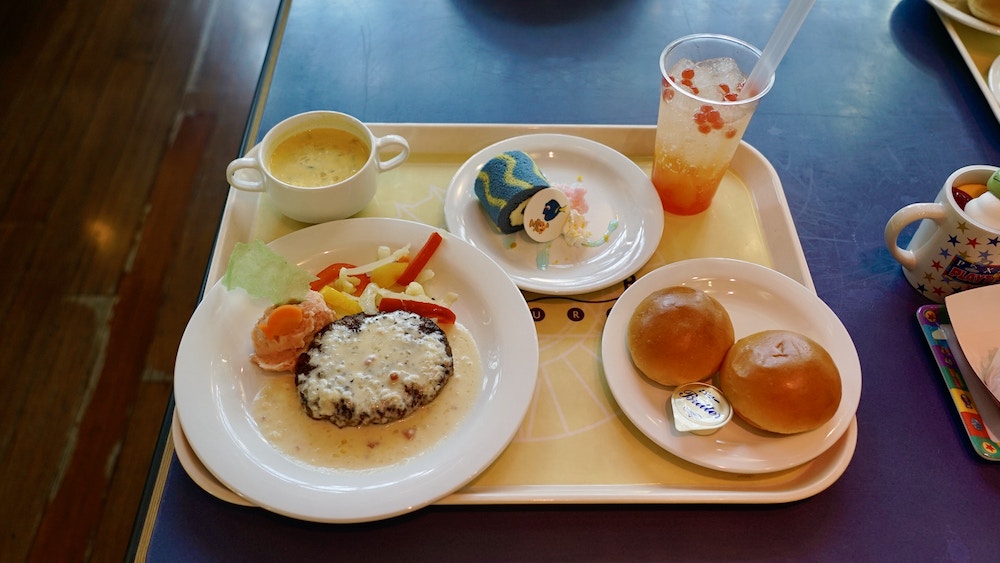 Quite the hearty portion, wouldn’t you say? The buffeteria sets at TDR have yet to disappoint me, and that includes this one. There’s only one thing here I didn’t care for, but that’s more a personal taste thing rather than bad food/drink. We’ll get to that in a bit. 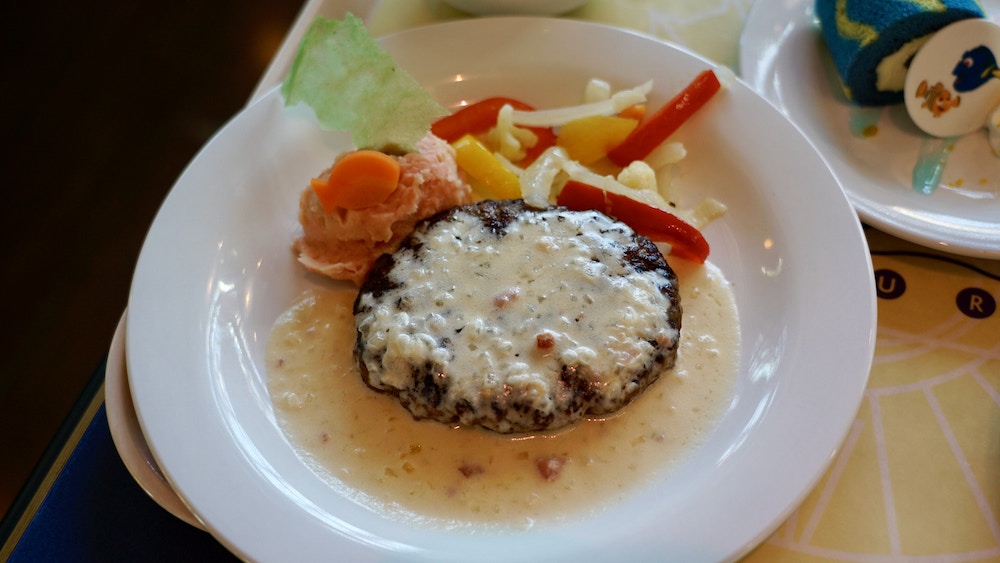 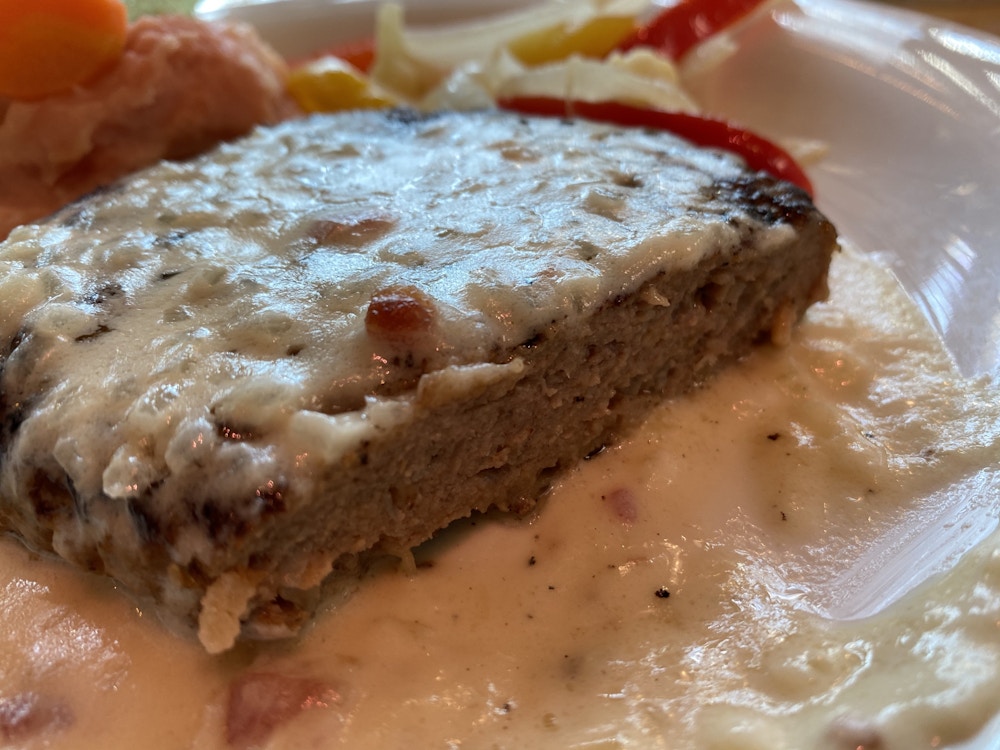 Meat patties are a staple of Tokyo Disney Resort buffeteria food. As with all meat patties, this one was also cooked well-done and served with an excellent complimentary sauce. The bacon, by the way, doesn’t come out very much. Not even a bit of a smoky taste. The sauce is mostly creamy with a slight hint of bacon. Still good, but I would’ve loved to taste more bacon in there. As for the garnish vegetables, I’m happy to report that unlike those in the last set I had with these, the flavor is mostly back! The peppers actually taste like bell peppers and not mush, and the onions have a bit of a crunch again. There’s less flavor in the onion than I’d prefer, but that’s just me. I also really enjoyed the potatoes with the fish-shaped carrot. There was more salt this time, but they could still use a bit of butter. Try mixing some in from your bread rolls. 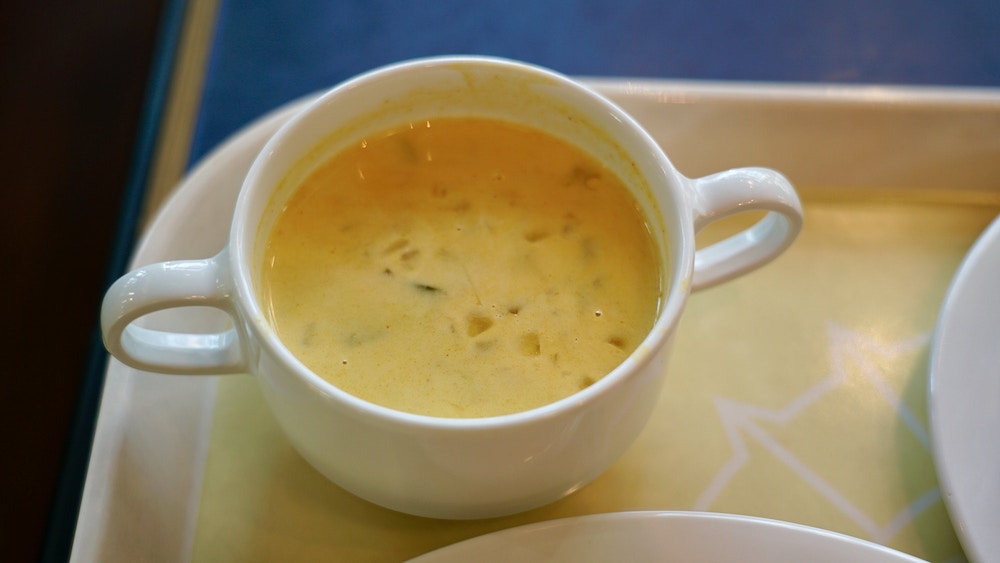 This may have been my favorite thing we ate all day. I’m not even kidding, I loved this soup so much! This is what they should’ve served for Halloween. There’s a lot of cut-up pumpkin in this one, and it packs a real pumpkin kick to it. Think of it more like American pumpkin than Japanese pumpkin, or kabocha. I’d order this on its own! 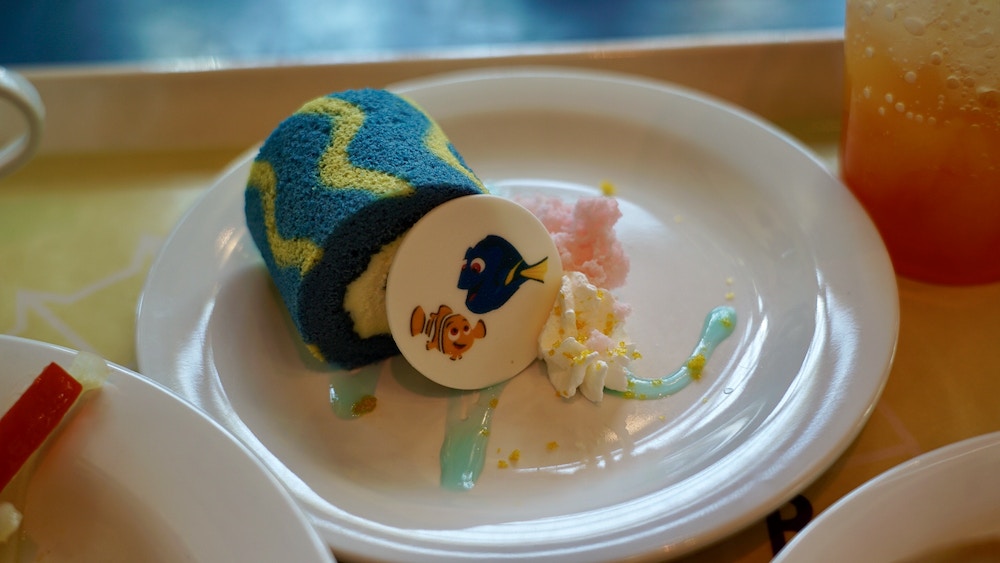 Roll cakes are another perennial favorite at TDR. Not my favorite, but they show up pretty often and they’re usually fine. If you’ve been following our Very Very Minnie and Duffy dessert reviews so far, you’ll know about my sweetness scale for TDR desserts. This one is on the more subtle end. There’s little yellow chunks of lemon flavor, but it’s mostly a regular cream flavor. It’s not bad, but I would love for all of the filling to be lemon-y. That little Nemo and Dory cookie there is made of the same stuff as those old Necco Sweetheart candies that you get on Valentine’s Day. At first, I was afraid it wasn’t meant for eating! But it became this neat little throwback to elementary school. All in all, this dessert does what it needs to do but isn’t anything spectacular. It’s a solid finisher to a good meal. 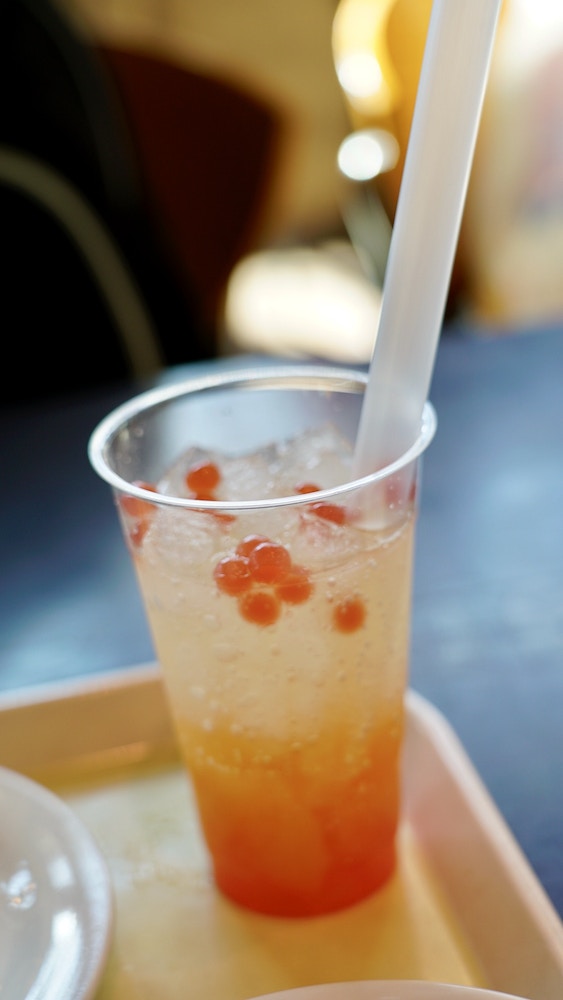 Alas, the one thing I didn’t enjoy. And before we go further, normally this sort of stuff is my favorite. But the orange wasn’t like regular orange, it was blood orange flavor. And I hate blood orange. So I’ll just set aside my feelings on the taste and talk about the makeup of the drink. It mixes rather easily, and the strawberry tapioca is delicious! It’s Kirin Lemon along with some syrups to flavor it. It was portioned well, the syrup didn’t taste artificial, and there wasn’t excessive ice. I’d call this drink a win! Everyone else liked it, so I’ll put my flavor faith in them.

All in all, I’d absolutely recommend a trip down to Horizon Bay Restaurant for the special Pixar Playtime set. I’ve never really had a bad meal here, and I think most Guests will walk away having enjoyed themselves. This is available through March 19th, so drop anchor in Port Discovery today!