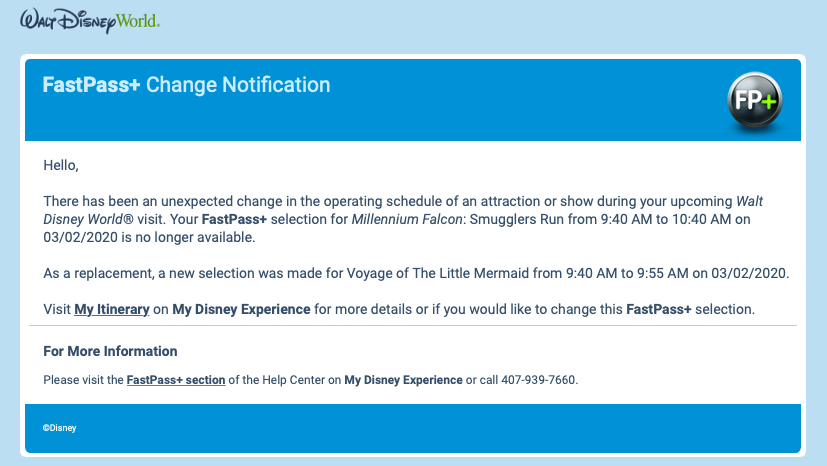 UPDATE: Disney has fixed the My Disney Experience glitch that caused Millennium Falcon: Smugglers Run FastPass+ selections to automatically convert into Tier 2 FastPasses. In an effort to make up for the frustration this caused guests, they have reinstated Smugglers Run FastPasses for the affected guests, as well as granted them an additional Multiple Experience FastPass to be used at any Tier 2 attraction.

The way I WONNNN!!!!! Woooow! I need this energy for DAK… I really glitched the system👌🏼👌🏼💀 pic.twitter.com/UHCHvZ8vn4

If you are still experiencing FastPass+ issues related to this My Disney Experience glitch, call (407) 939-7660 for assistance.

With Millennium Falcon: Smugglers Run and Mickey & Minnie’s Runaway Railway now available as FastPass+ selections, the mad dash every morning to secure FastPasses from the My Disney Experience app has begun on every new subsequent day added to the calendar. However, it seems that a recent glitch in the app has been converting these highly-coveted Tier 1 FastPasses into, well, less than ideal Tier 2 options.

A reader recently messaged us with this alarming email notification they’d received overnight concerning a change to their FastPass+ selections. They were informed that their Millennium Falcon: Smugglers Run FastPass had been changed to none other than a FastPass for… Voyage of The Little Mermaid.

Other reports on social media list odd replacements such as the Disney Junior Dance Party, among others. Even non-Tier 1 options are glitching, as a Toy Story Mania! FastPass for March 3 automatically converted to a Multiple Experience FastPass.

By calling the number on the email, they were able to speak to a Cast Member that in turn changed the odd mystery replacement into a Multiple Experience FastPass, valid for any attraction except Millennium Falcon: Smugglers Run and Slinky Dog Dash. This met their needs and they chose not to escalate further, so it is still unknown what would happen if a guest were to request that their original Millennium FastPasses be reinstated.

It’s likely that the rollout of FastPass+ options for Mickey & Minnie’s Runaway Railway may have effectively derailed the FastPass+ system, causing these glitches. Many of those affected had FastPasses within that initial set of available dates, so double check your current FastPass+ selections and keep a close eye on any random changes.

Next
Beauty and the Beast Comes to East High as Production Begins on Second Season of “High School Musical: The Musical: The Series”