If you haven’t been to Disney’s Hollywood Studios in a few years, you might feel like you’ve been dropped into a fantasy world when you return to find the park full of very different attractions from those you remember. One of those new rides will be Mickey and Minnie’s Runaway Railway, invading the home of The Great Movie Ride in the very center of the park starting March 4th. 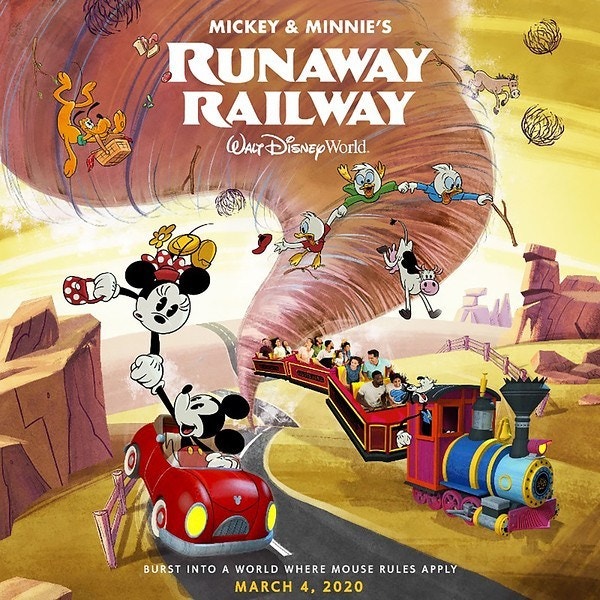 You may recall that when we gave you a scene-by-scene breakdown of the upcoming ride (crazily a few years back at this point), we made sure to stop and mention the importance of a scene where characters and the Runnamuck Railway train get caught in a twister.

You may recall plans for The Great Movie Ride included a twister that would drop guests onto the Yellow Brick Road and into The Wizard of Oz. Due to disagreements with MGM, the scene was never completed and the wind machine was instead used for the Mickey Mouse in Fantasia sequence. Well, a fully-realized twister scene is now confirmed for Runaway Railway with the latest promotional art release, seen above. If you don’t think it is a reference to the classic film, well, it’s a really big coincidence that both Toto and Pluto both travel with a picnic basket.

While it may not take us to Munchkinland, we will enter “a world where mouse rules apply”, according to Disney. Mickey and Minnie’s Runaway Railway opens March 4th, 202 at Disney’s Hollywood Studios and at Disneyland Park in 2022.