Are you ready for the Season 7 premiere of “Star Wars: The Clone Wars” this Friday? I sure am. Between the new Baby Yoda plush and accessories previewed today, we’ve all got Star Wars on the mind, and thanks to a special media preview, we’ve got a closer look at all the great merchandise coming to Disney Parks and shopDisney in the coming months. There’s exclusive new Clone Wars merchandise, including an amazing set of Ahsoka Tano themed Minnie Ears, plus lots of plush themed after everyone’s favorite child from “The Mandalorian”. Check out the full merchandise preview below!

In this display, you have a bunch of neat new The Clone Wars merchandise, including new tees, costumes, figures, and even a toy light-up Darksaber. (Before Moff Gideon got ahold of it in “The Mandalorian”, it belonged to Pre Vizsla during the Clone Wars, and then Sabine Wren, and then Darth Maul…)

Quite possibly the best set of ears we’ve seen as of late are these Ahsoka Tano Minnie Ears. The ears take the pattern of her blue and white striped Togruta montrals, the bow mimics her characteristic white face markings, and the headband makes up her crown. 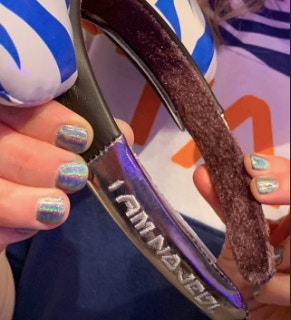 “I am no Jedi” is embroidered onto the headband, the very words Ahsoka says during her epic battle against her former master-turned-sith, Darth Vader in Season 2 of Star Wars Rebels.

Next up, we have this epic display of Baby Yoda and other assorted Mandalorian merch. There are MagicBands and such that have already been released, plus the pop-up card that was briefly available at Disney Springs. However, it seems even more merch is on its way.

Here we have some more The Mandalorian Funko Pops (including the Baby Yoda one we all impulse-bought and have yet to receive) and Black Series figures.

Here, we have some of the Baby Yoda plush that will eventually make their way into stores and Disney Parks.

Finally, some more Baby Yoda figures that went on sale a few weeks ago, plus some new board games that are on their way. And of course, we can’t forget the animatronic Baby Yoda that’s been making its rounds cooing on everyone’s feed:

The animatronic doll costs $60 and is currently available for pre-order on Amazon.

As always, stay tuned to WDWNT to find out when these new products arrive at the parks and online via shopDisney! Thanks to Star Wars Explained for these photos of the new merchandise!