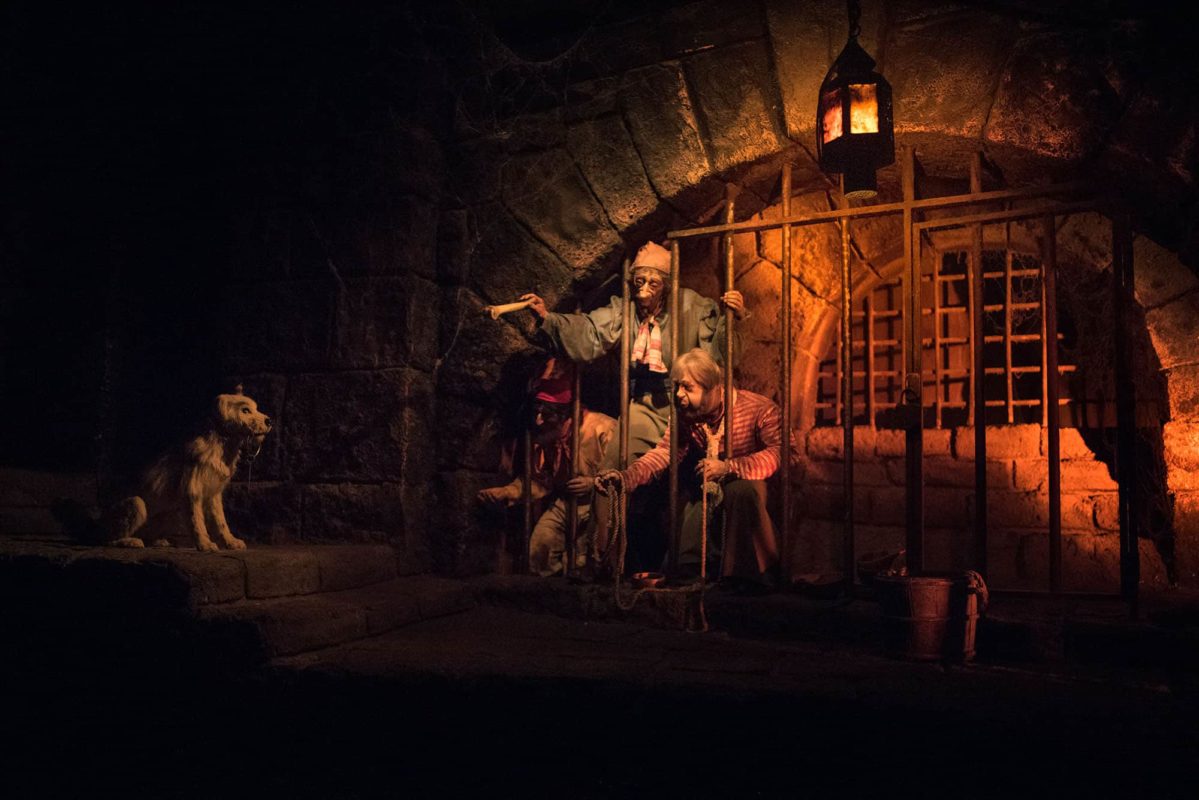 Editor’s Note: You could say we’ve been navigating some rough waters lately, but that’s no reason to miss the anniversary of one of our favorite iconic attractions: Disneyland’s Pirates of the Caribbean.

Having opened on March 18, 1967, Pirates of the Caribbean in Disneyland was the last attraction that Walt Disney himself participated in designing. The attraction debuted three months after his death, but was an instant hit. In celebration of the attraction’s 53rd anniversary, we’ll be bringing you all kinds of fun content throughout the afternoon, recapping the storied history of Pirates of the Caribbean.

The following article was first published back in March 2017 for the 50th anniversary of Pirates of the Caribbean, back when WDWNT went all out for the golden (doubloon) celebration. We’ve gone in and added three more facts to update the list. For a safe voyage, remember to stay seated with your hands, arms, feet, and legs inside the boat—and watch your children. And remember, no flash pictures! Now, off with ya!

In honor of the 53rd anniversary of the original Pirates of the Caribbean attraction at Disneyland, we’ve decided to celebrate the occasion with  53 fun facts you may or may not know about the rides and the movie franchise. The list will countdown to what we think are the coolest facts about Pirates of the Caribbean, from fifty-three, down to one.

53 Fun Facts about Pirates of the Caribbean

#53: In June 2018, the auction scene with the Redhead was changed in a controversial re-imagining of the character during a scheduled refurbishment. Previously, the Redhead was the prized item at a wench auction. Now, the character, renamed Redd, is a pirate herself, taking on the role of auctioneer as she seeks to profit off the goods she’s plundered.

#52: The June 2018 refurbishment also included three changes to the tunnel scene following the treasure room: the mist waterfall (and Davy Jones/Blackbeard narration) was removed entirely, the original 1967 narration by Paul Frees was reinstated, and a scene was added at the end of the cave, depicting a skeleton transforming into a live pirate as the boat passes by.

#51: The only remaining Pirates of the Caribbean attraction that still has the original Redhead auction scene is the Tokyo Disneyland version of the ride:

#50: Pirates of the Caribbean at the Disneyland Resort was the very last ride Walt personally oversaw before he died in December 1966.

#49: Original plans for the attraction actually were for a wax museum of famous pirates. It became an audio-animatronic ride after the great success of Great Moments with Mr. Lincoln and “it’s a small world”.

#48: In the Disneyland version, there are a total of 122 audio-animatronic figures, including 68 humans and 54 animals.

#47: On the facade at Disneyland, there are the initials “WD” and “RD” carved into the wrought iron fence on the balcony upstairs, where Walt’s apartment would have been. The “WD” stands for Walt Disney and the “RD” stands for his brother Roy Disney.

#46: Staying on that topic, the “Disneyland Dream Suite” above the Pirates attraction at Disneyland was actually supposed to be a 3,000 square-foot apartment for Walt Disne and his family. It didn’t get finished before Walt died, and Roy then did not want to use it. For some time it was used for VIPs, and then it became The Disney Gallery. Now it is home to the “Disneyland Dream Suite” and the 21 Royal offering.

#45: A total of $8 million was spent on the attraction at Disneyland.

#44:  The Magic Kingdom Pirates of the Caribbean ride opened to guests on December 15th, 1973.

#42: The Pirates of the Caribbean ride at Tokyo Disneyland opened to the public on April 15th, 1983.

#41: The Pirates of the Caribbean ride at Disneyland Paris opened to the public on April 12th, 1992.

#40: The Pirates of the Caribbean ride at Disneyland opened to the public on March 18th, 1967.

#39: Pirates of the Caribbean: Curse of the Black Pearl made $654 million worldwide.

#38: Robert De Niro was originally offered the role of Captain Jack Sparrow. However, he turned down the role because he thought that the film would do poorly at the box office.

#37: The entire scene where the attack on Port Royal happened was all shot in one take.

#36: The Pirates of the Caribbean movie franchise features 5 movies.

#34: Filming for Pirates of the Caribbean: Dead Men Tell No Tales took place in Puerto Rico and New Orleans.

#33: Hans Zimmer is actually not recording the soundtrack for the 5th film; one of his proteges, Geoff Zanelli is doing it. Hans has recorded the soundtracks for the other 4 films.

#32: Filming officially ended for Pirates of the Caribbean: Dead Men Tell No Tales on July 21st, 2015.

#31: Pirates of the Caribbean: The Curse of the Black Pearl was never expected to succeed. In fact, Disney thought that the 2003 film The Haunted Mansion would be the bigger hit.

#30: Pirates of the Caribbean: Dead Man’s Chest was the number 1 film of 2006, making almost $1.8 billion at the worldwide box office.

#28: The Interceptor ship from Pirates of the Caribbean Curse of the Black Pearl was actually a real ship named the Lady Washington.

#27: During filming, Johnny Depp wore contact lenses that acted like sunglasses so he wouldn’t have to squint while facing the sun.

#26: Davy Jones’ tentacles were partially real, the rest was CGI.

#25: Pirates of the Caribbean at Magic Kingdom almost never happened. Imagineers thought that the attraction wouldn’t be popular in Florida with the proximity to the Caribbean. So many guests complained that Disney decided to build the ride in Florida instead of the unique Western River Expedition.

#24: Only the Disneyland and Disneyland Paris versions of Pirates of the Caribbean have 2 drops, while Magic Kingdom, Shanghai, and Tokyo Disneyland only have 1.

#21: In total, there are 630,000 gallons of water pumping throughout the Disneyland attraction.

#20: In order to renovate/refurbish the Pirates at Disneyland, it takes a total of 3 days to empty the ‘bayou’ and 3 days to fill it back up.

#19: Pirates of the Caribbean On Stranger Tides was shot on 5 different islands which included Kauai, Oahu, Puerto Rico, Palominito, and Great Britain.

#16: The lowest grossing film in the Pirates’ franchise is Pirates of the Caribbean Curse of the Black Pearl, which only made $654 million.

#15: The Disneyland version of Pirates of the Caribbean actually used to have real human bones… yep, human bones. They did eventually take them all out, however to this day, it is rumored there is one human skull left in the ride but has not been confirmed.

#13: To create the ‘fire’ in the attraction, cloth, lights, and fans are all used. In fact, the Anaheim Fire Chief almost shut down the ride at one point for thinking it was real fire!

#12: X Atencio and George Bruns were the Imagineers who composed the famous ‘Yo Ho, Yo Ho, a Pirates’ Life for Me!’

#11: The lyric “Fifteen men on the Dead Man’s Chest” and “Yo Ho Ho, and a bottle of rum!” referred to the pirate Blackbeard’s habit of leaving crewmen on the deserted island, with only a bottle of rum, to die as punishment.

#10: The “Yo Ho, A Pirate’s Life for Me”) was sung by The Mellomen, a barbershop quartet that also sang many songs for Disney films. They also sang as backup for Elvis. The frontman of The Mellomen, Thurl Ravenscroft, was the voice of Tony the Tiger, of Kellogg’s Frosted Flakes.

#8: Remember the jail scene where several characters were trying to get the key from the dog? The whistling guy in the middle is based on a janitor that used to work at what is now called Walt Disney Imagineering.

#7: The ride starts at Laffite’s Landing, where you board a boat after waiting in line for what seems to be three and a half days or so. The Lafitte in Lafitte’s Landing refers to Jean Lafitte (often spelled Laffite), who was a real-life pirate and privateer in the Gulf of Mexico (and subsequent American war hero) in the late 1700s/early 1800s.

#6: When you pass the Blue Bayou restaurant, look up at the second story of the building. You may think that it’s a facade, but the balcony actually belongs to Club 33, a member-only restaurant that most of us can’t afford to join (it costs tens of thousands of dollars to join, plus there’s a ten year waiting list anyhow).

#5: The most famous pirate of the entire ride – besides the newly added Jack Sparrow, Davy Jones and Captain Barbossa for the movie tie-in – is the Pooped Pirate. Originally, the Pooped Pirate was shown boasting and waving a lady’s lingerie while a woman peeked up from inside an oak barrel behind his back. But that was deemed politically incorrect in the 1990’s, so the Pooped Pirate was changed to the gluttonous pirate in 1997 (the woman in the barrel was replaced by a cat) and then to a pirate holding the key and map in 2006 (with Jack Sparrow in the barrel).

#4: The façade of the attraction for Disneyland was partly inspired by the Cabildo building in Jackson Square in New Orleans, which served as the seat of the Spanish colonial government in 1799. It is also noted for being the site where the Louisiana Purchase was signed in 1803.

#3: At the beginning of the Magic Kingdom version, guests experience one big drop. This wasn’t done to add a thrill to the ride, although it does have that effect. The drop is there because Disney needed to move guests below the train tracks above. The drop couldn’t be any bigger though because of the high water table in that particular spot.

#2: In the Magic Kingdom version, enter the queue on the left-hand side and look for the tall gun cabinets. The cabinets have hidden Mickey-shaped locks. As you float past the Treasure Room at the end, there is a hidden Mickey on the lock in the middle of the open wooden door, as well as on the cabinet locks behind Captain Jack Sparrow.

#1: One of the scenes in the Florida queue area is of two skeletons playing chess in a dungeon cell. If you look closely, you might notice that no one will win this chess game; the pieces are arranged in a eternal stalemate.

I hope you have enjoyed these 50 fascinating facts about the Pirates of the Caribbean movie franchise and rides! Happy 53rd birthday you scalawags!

Previous
VIDEO: Celebrate 53 Years of Pirates of the Caribbean with a FULL History of the Classic Attraction, Plus a Prop & Memorabilia Tour, and More!

Next
DISNEY+ REVIEW: “Kim Possible” on Deep in the Plus