UPDATE: The parks may be closing down temporarily, but Disney+ is here to remind us that we can still have some Disney magic, even while cooped up at home.

D23 has just announced that the movie’s release has been moved up three months in advance––from June 26 to this weekend on March 15. Here’s to hoping you bought some snacks and popcorn on that grocery/toilet paper shopping run this morning!

With a slew of other movie releases like “Mulan” now delayed, Disney is doing their best to keep fans happy and entertained amidst the Coronavirus (COVID-19) pandemic. Depending on how long the effects of the pandemic last, we’re likely to see even more releases bumped up ahead of schedule.

The original release date announcement is listed below.

For those that are ready to head Into The Unknown again, you are in luck! We finally have a release date for Frozen II on Disney+. 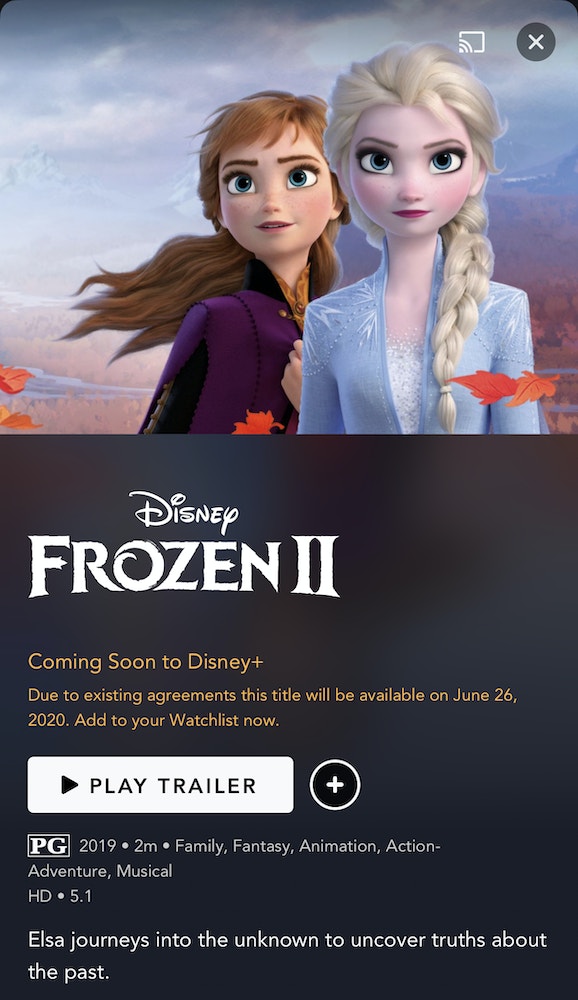 Elsa and Anna’s new journey to uncover truths about their paths will be available to stream on Disney+ on June 26th. It is searchable now on your Disney+ enabled device, and there is even a link to the trailer on the pop-up menu title.

We will continue to wait on information regarding fellow 2019 mega release, Star Wars: The Rise Of Skywalker hitting Disney+, as well as Maleficent: Mistress of Evil, which are both left on the Disney+ release docket.