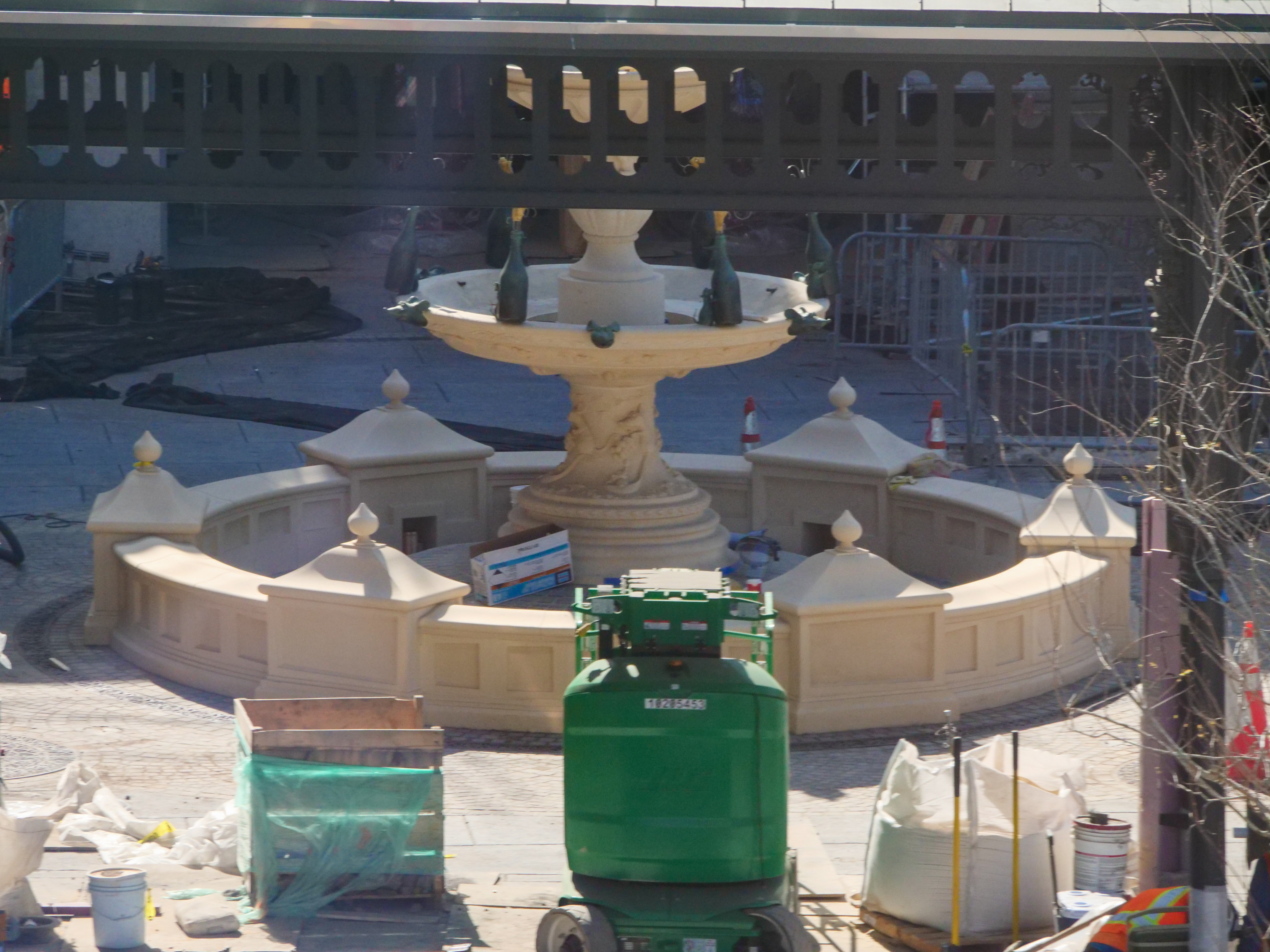 PHOTOS: France Pavilion Expansion Shakes Things Up With the Addition of Champagne Bottles to Fountain in Remy’s Courtyard

With all of the activity that is occurring in EPCOT recently, one of the projects that has near-daily updates is the France Pavilion Expansion in the World Showcase. The new add-on to the existing France Pavilion, which is expected to open this summer, has seen quite a few changes in the last two months alone. The installation of the sign for Gusteau’s restaurant, the addition of the Ratatouille character fountain, and most recently the Paris Metro-style iron archway appeared at what will soon be the entrance to the expansion, have all developed over the last 8 weeks. Today, we’re highlighting some of the most recent changes to this massive construction project. 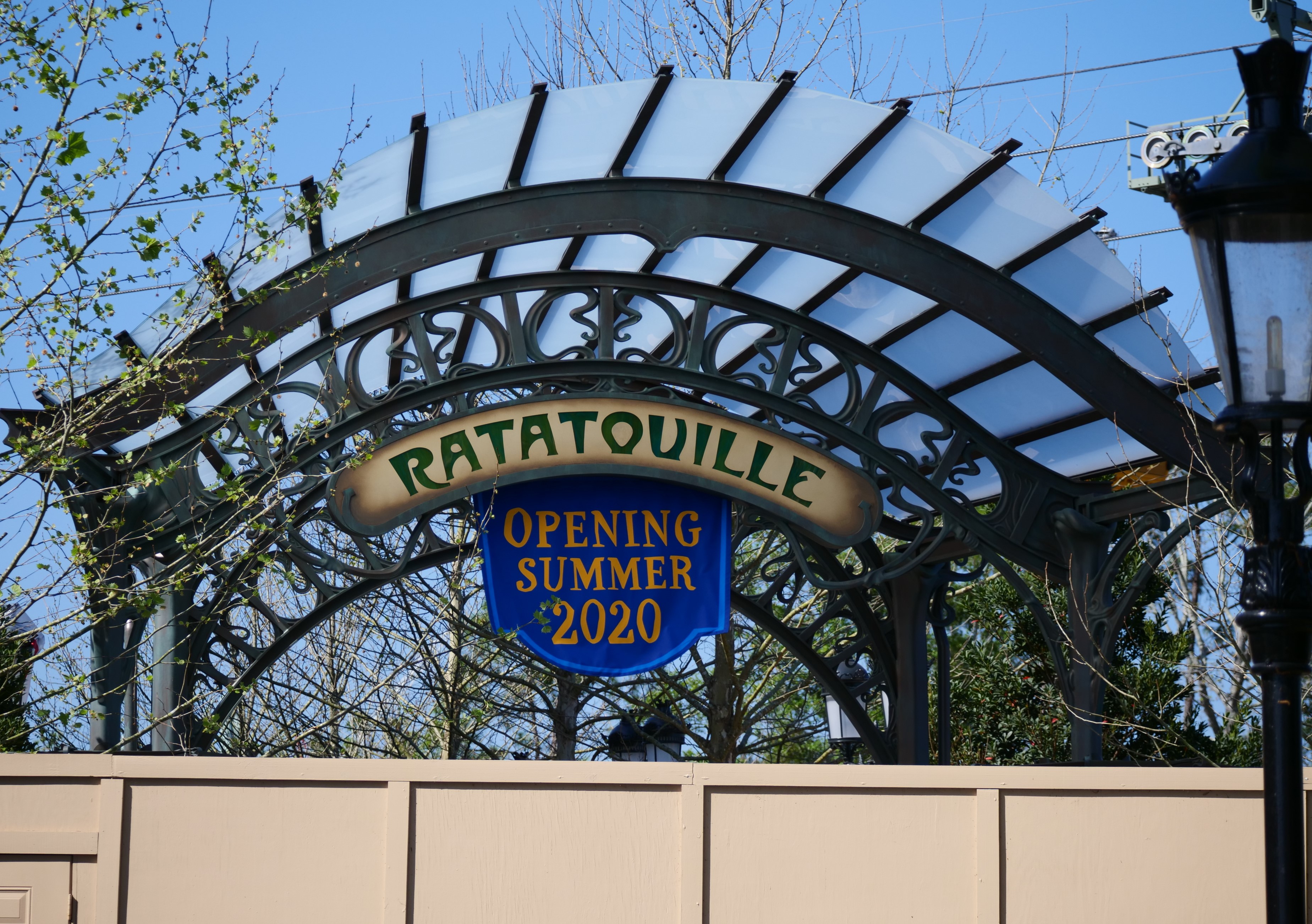 The wrought-iron archway, adorned with an “Opening Summer 2020” banner, appears to be completed and should reflect what we will see when the area opens to guests in the summer – though an opening by June 1st (or earlier) is a possibility. 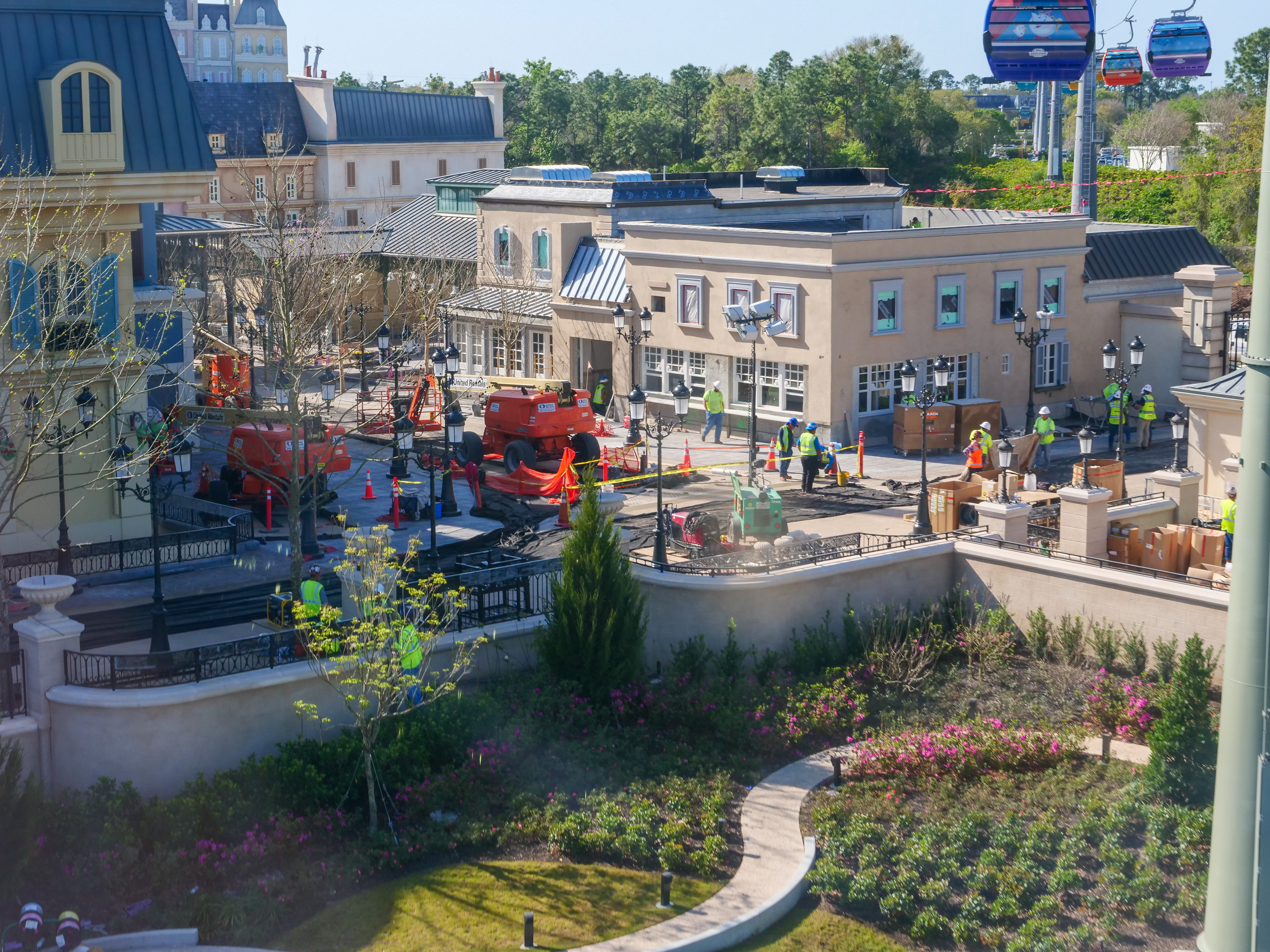 The number of workers that can be seen on the project site on any given day is a good indication of how much activity and progress is being made on the expansion. Fully completed sidewalks, walkways, and queue overhangs are few of the more run-of-the-mill developments recently. 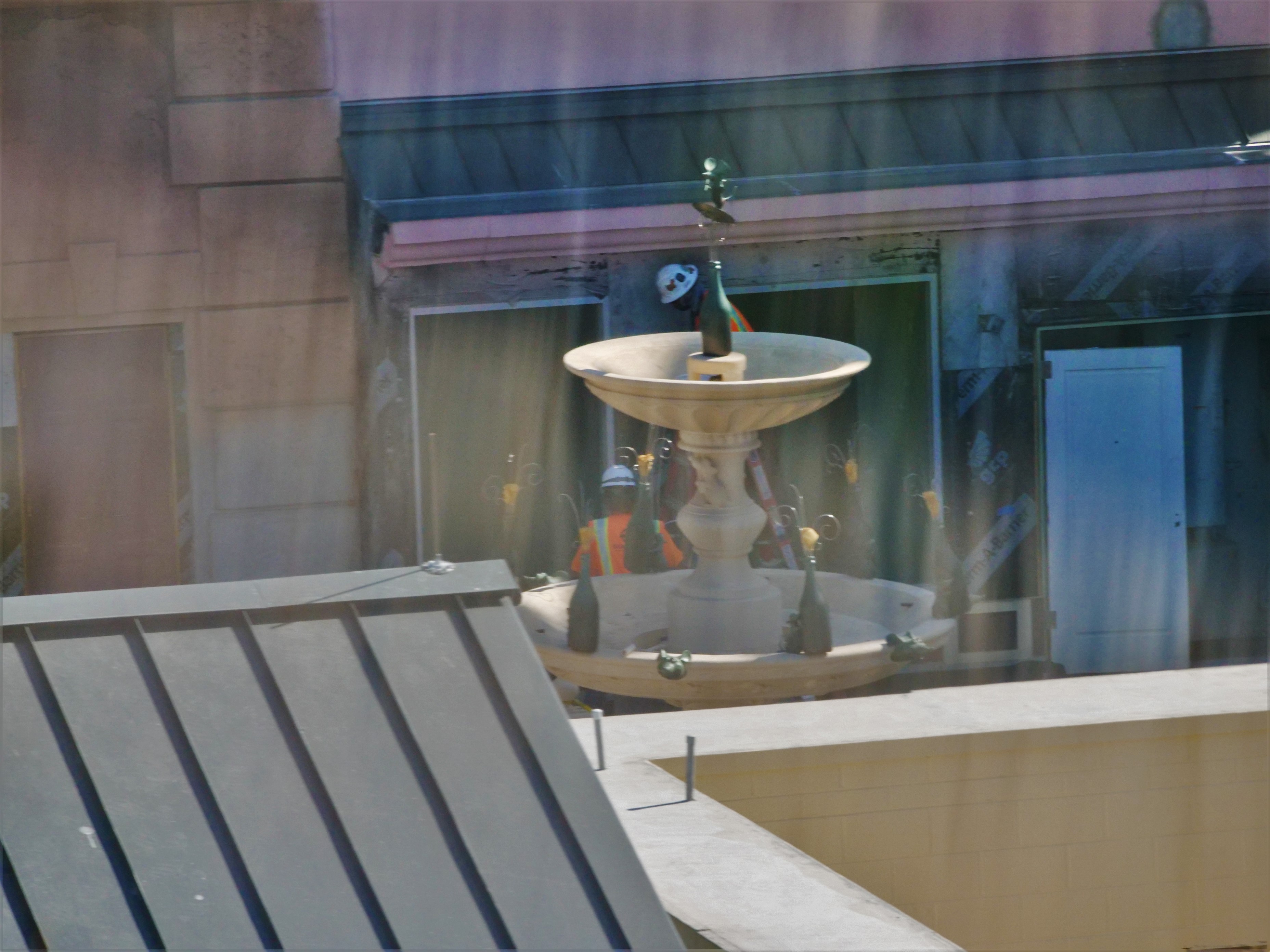 One very exciting change today, however, is the addition of the champagne bottles to the character fountain in the courtyard of Remy’s Ratatouille Adventure. Seven new water features were installed on the fountain – six on the lower tier, and the featured one at the apex of the fountain with Remy holding a spoon while standing on a plate.

In this photo, we get a better idea of how the bottles are perched along the edges of the 2nd tier of the fountain – these bottles will launch champagne (well, foamy water) into the fountain. We also see some accent pieces added around the tier which bear Remy’s likeness. 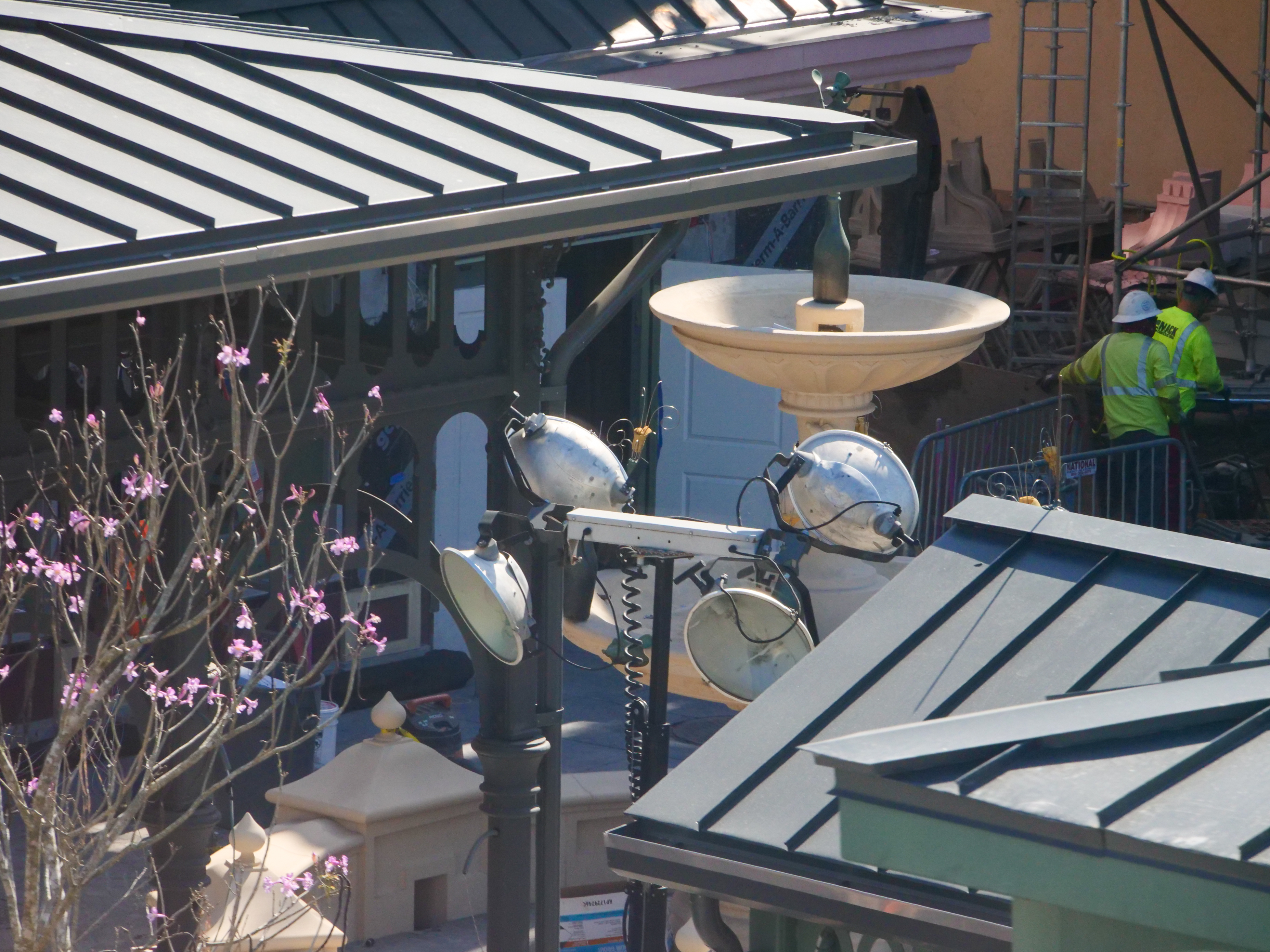 Each of the champagne bottles have metal accents extending from the bottle openings, which visually simulate the “pop” of the corks. In the photo above we get a better view of these curved metal pieces on the lower tier. 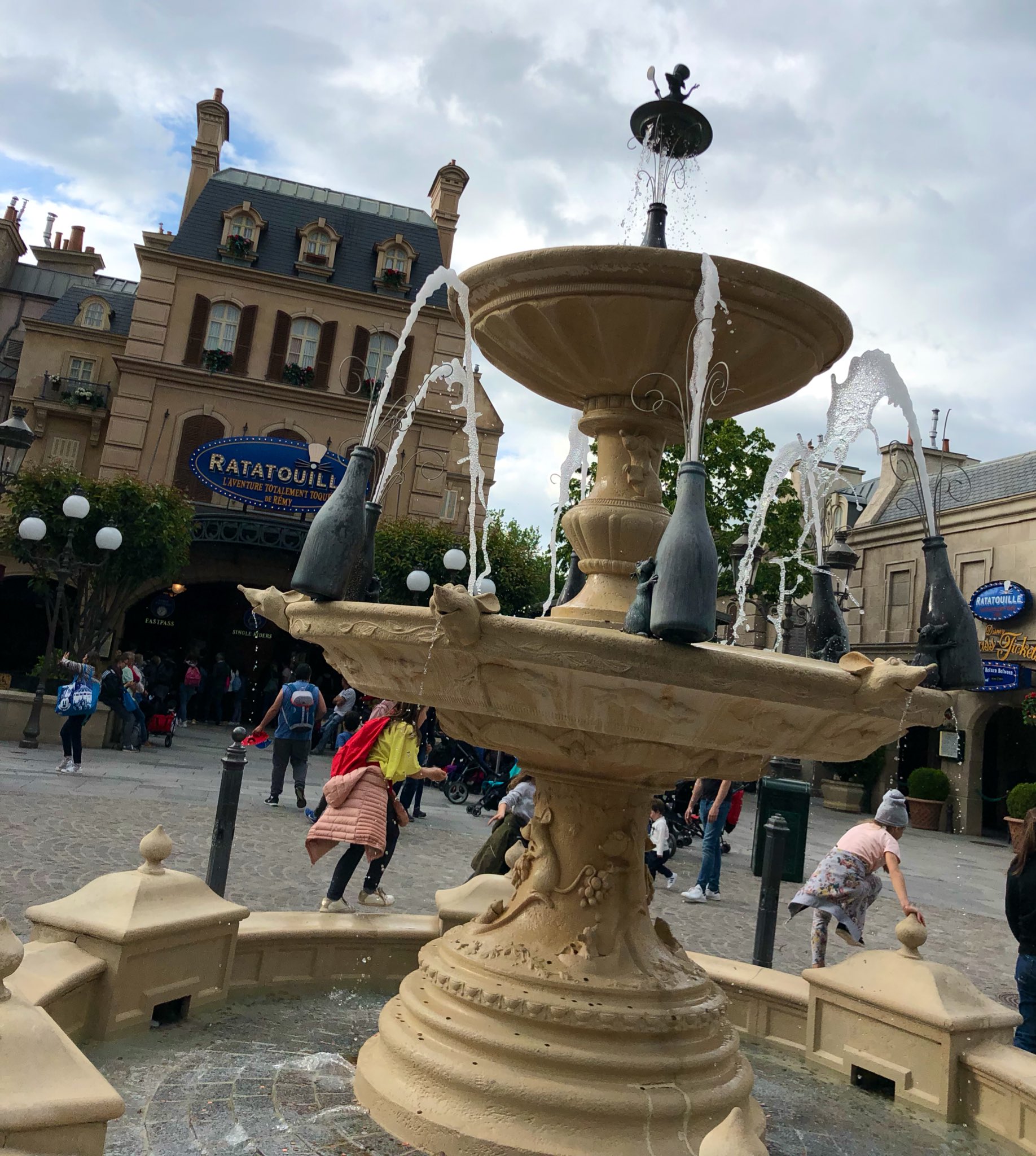 Once completed, the fountain in the France Pavilion Expansion will be very similar (if not identical) to the version in Walt Disney Studios at the Disneyland Paris Resort, pictured above. 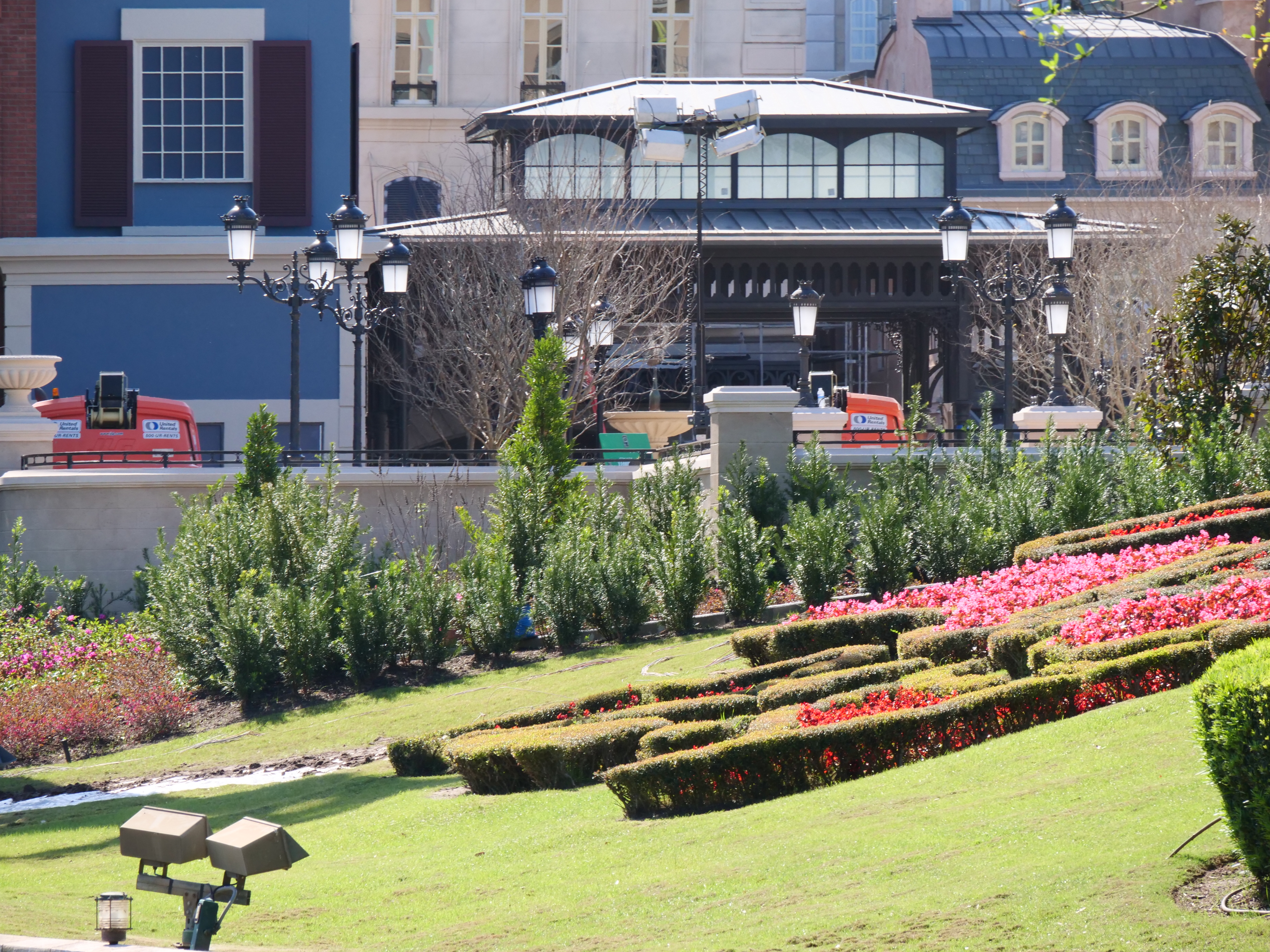 Another recent development has been the addition of dozens of lamp posts around the area, most of which were erected in only the last few days. 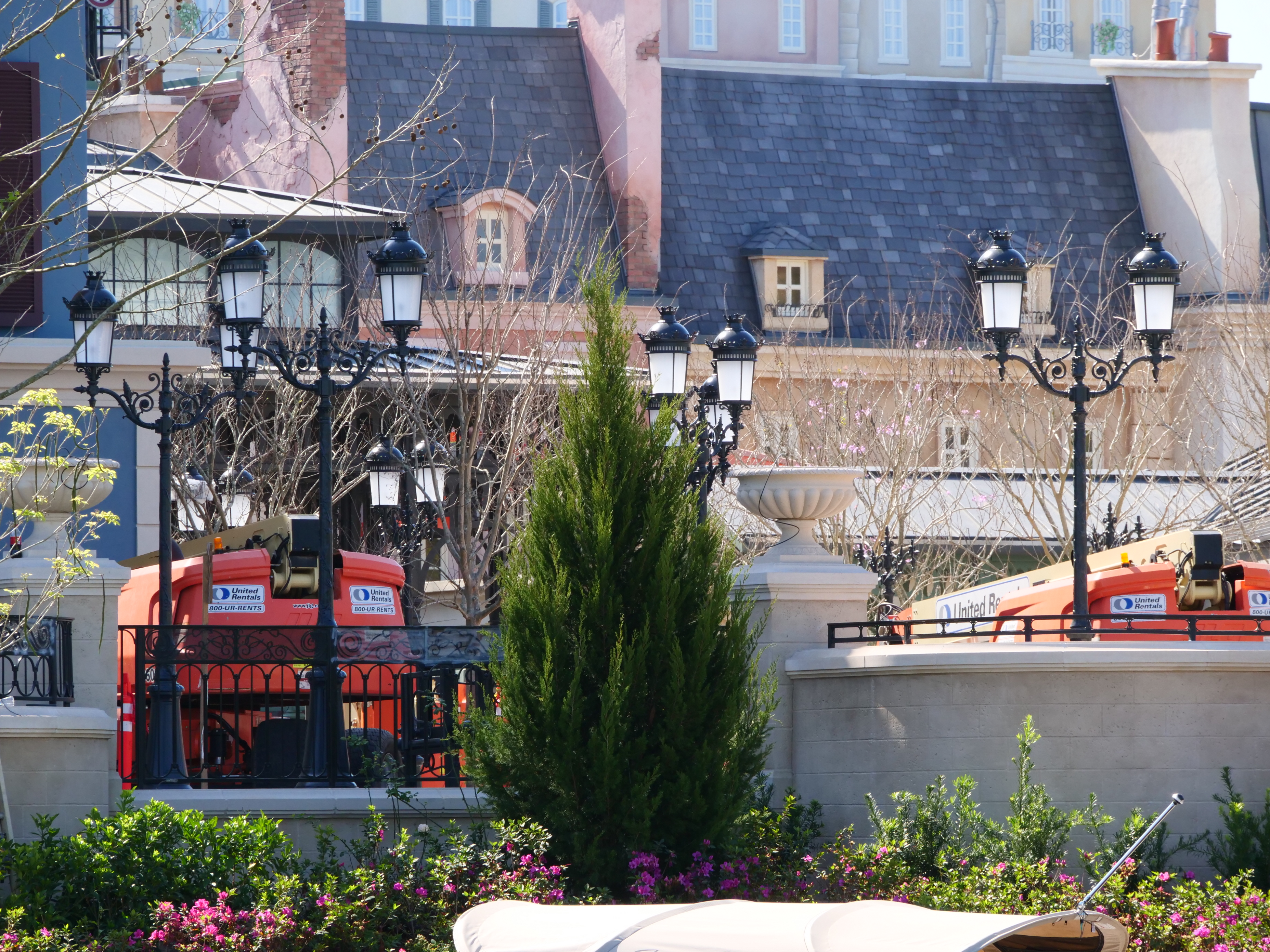 These lamp posts litter the courtyard (and the pathway leading to it) as they would on an authentic Parisian street. 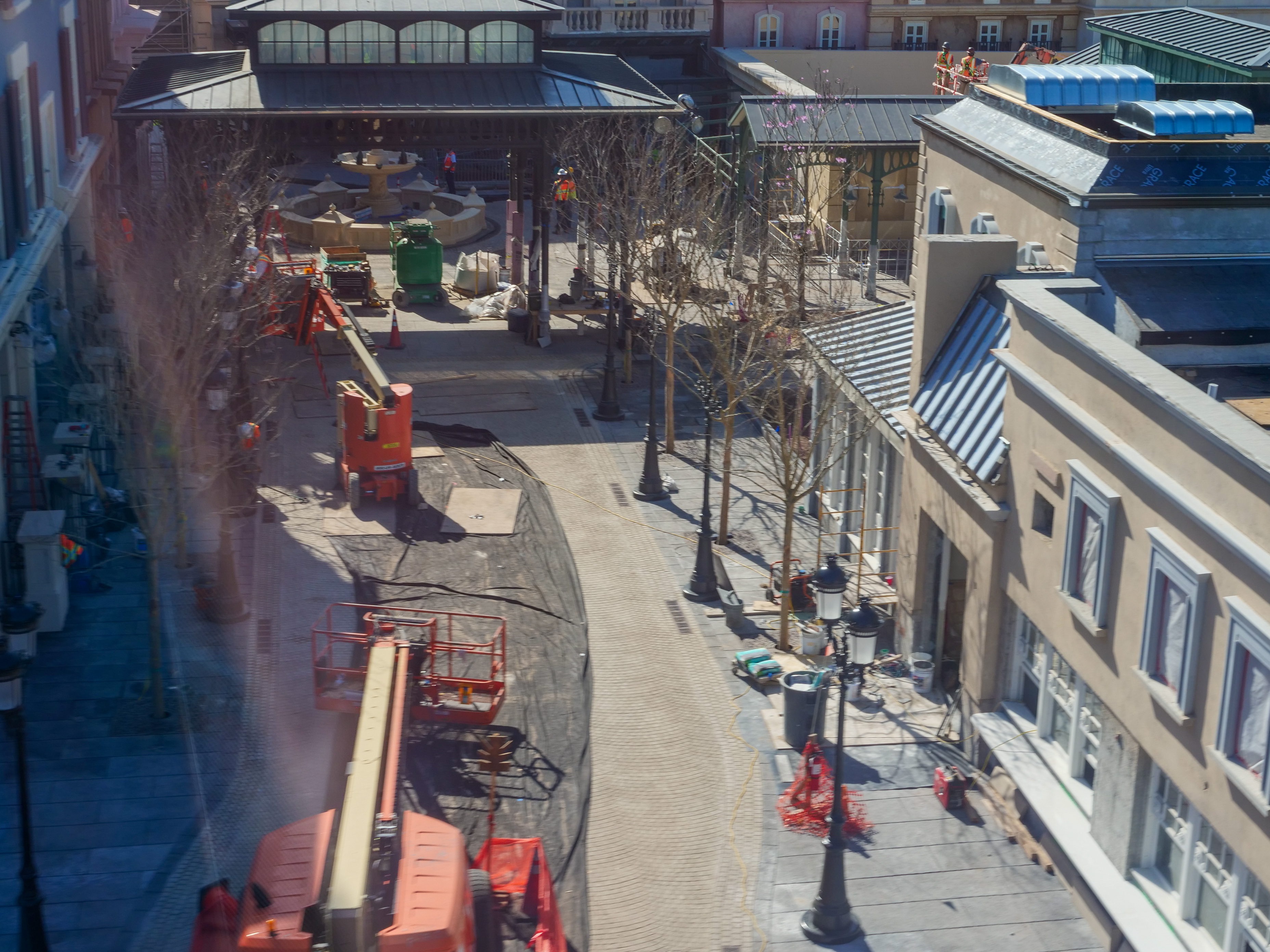 Deeper into the courtyard, we see posts which have been installed but do not yet have the lighting elements attached. 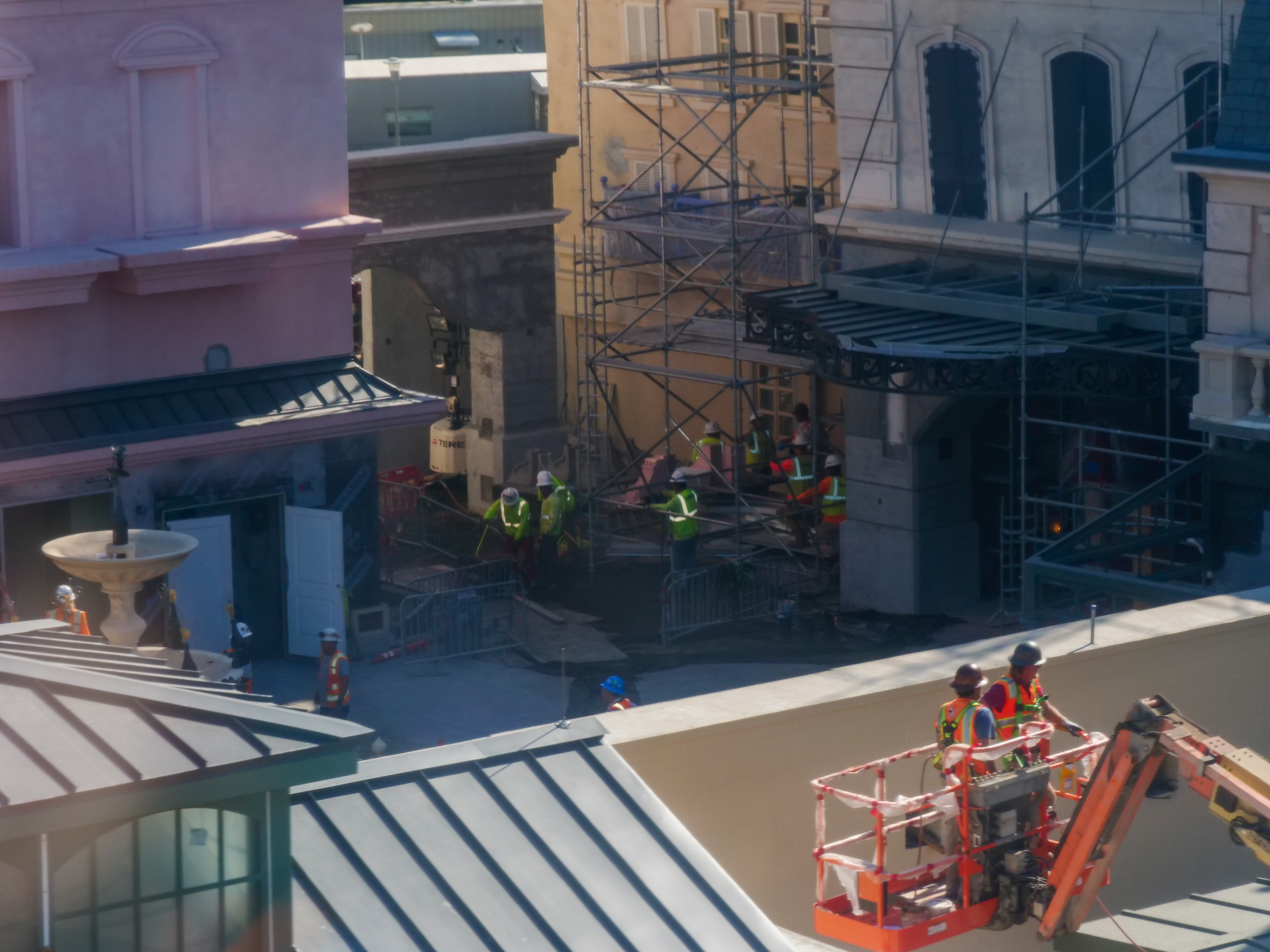 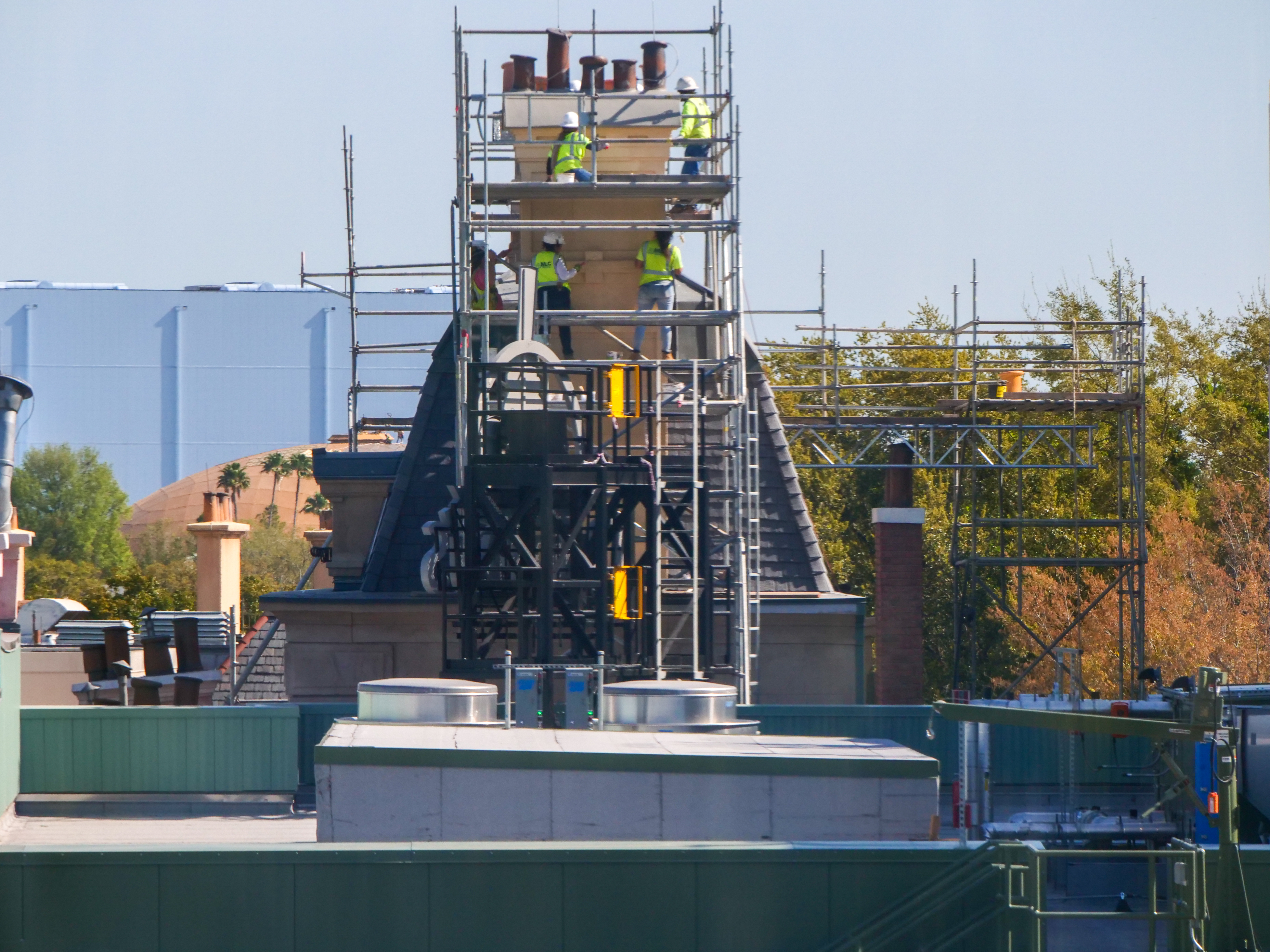 Much higher up, with Guardians of the Galaxy: Cosmic Rewind and the future Play! Pavilion in the distance, half a dozen workers are adding more and more details to these chimneys. 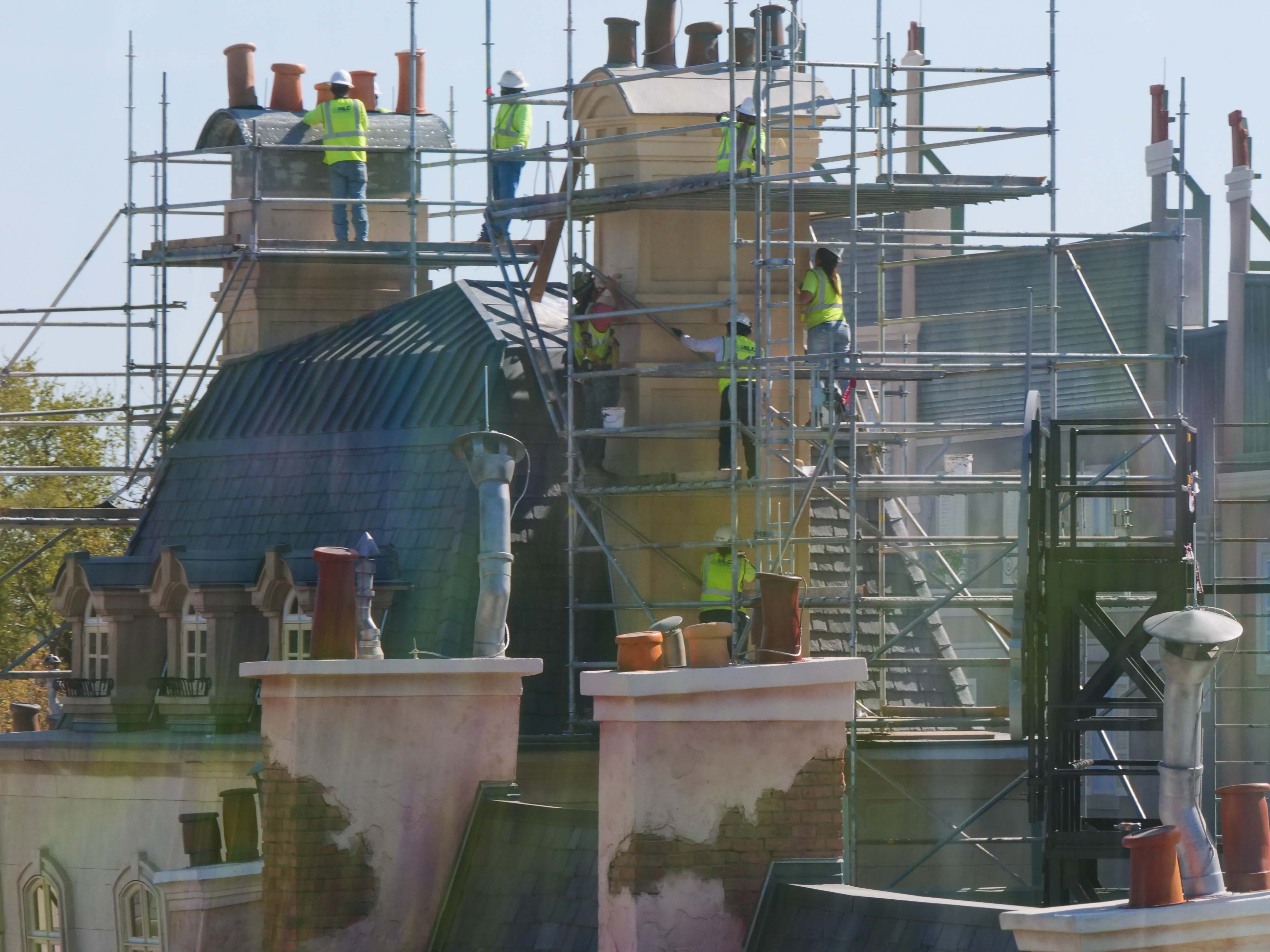 Distressed elements such as exposed brick are being added to building exteriors, as well as smaller details such as the uneven exhaust pipes at the peaks of the chimneys.

Despite the imminent closure of EPCOT, there are no signs of progress on this highly-anticipated attraction slowing down any time soon. Are you excited for the summer (or perhaps sooner) opening of Remy’s Ratatouille Adventure? Let us know in the comments!