Young and old are encouraged to play along, but the dangers in the jungle are still real… or are they? Photo credit: Sharon Janosko
Home
Parks & Resorts
Walt Disney World Resort
Magic Kingdom

Editor’s Note: This is a guest post by Freddy Martin (http://freddymartin.net/).

If you looked around Adventureland at Magic Kingdom park on Sunday and felt a little underdressed, you weren’t alone. All those guests wearing pith helmets and Hawaiian print dresses weren’t extras from the Jungle Cruise movie. They were participating in Adventureland Day, an unofficial fan-organized Disney event.

“AdventureLanders” (a name they call themselves) follow the theme of the land by dressing the part in creative ways. Some guests wore pith helmets, animal print, old-timey facial hair, and tall boots to fit with the 1930s theme of the Jungle Cruise. Others went full Enchanted Tiki Room style with Polynesian print dresses, leis, and brightly-colored parasols that would have seemed just as at home in a HippopotoMai Tai from Trader Sam’s Grog Grotto.

“Adventureland Day is a fun way to celebrate the stories and history of Disney’s most exciting and mysterious themed land,” said Stewart Marshall, co-organizer of the event. “Whether it’s the Jungle Cruise, the Enchanted Tiki Room, or the Society of Explorers and Adventurers, admirers of these stories can find their place with us.”

Disney’s theming makes the perfect backdrop for photo fun. Many participants added flair to their outfits like pins and patches to pay homage to beloved Disney properties like 20,000 Leagues Under the Sea, The Little Orange Bird, or the Adventurers Club. 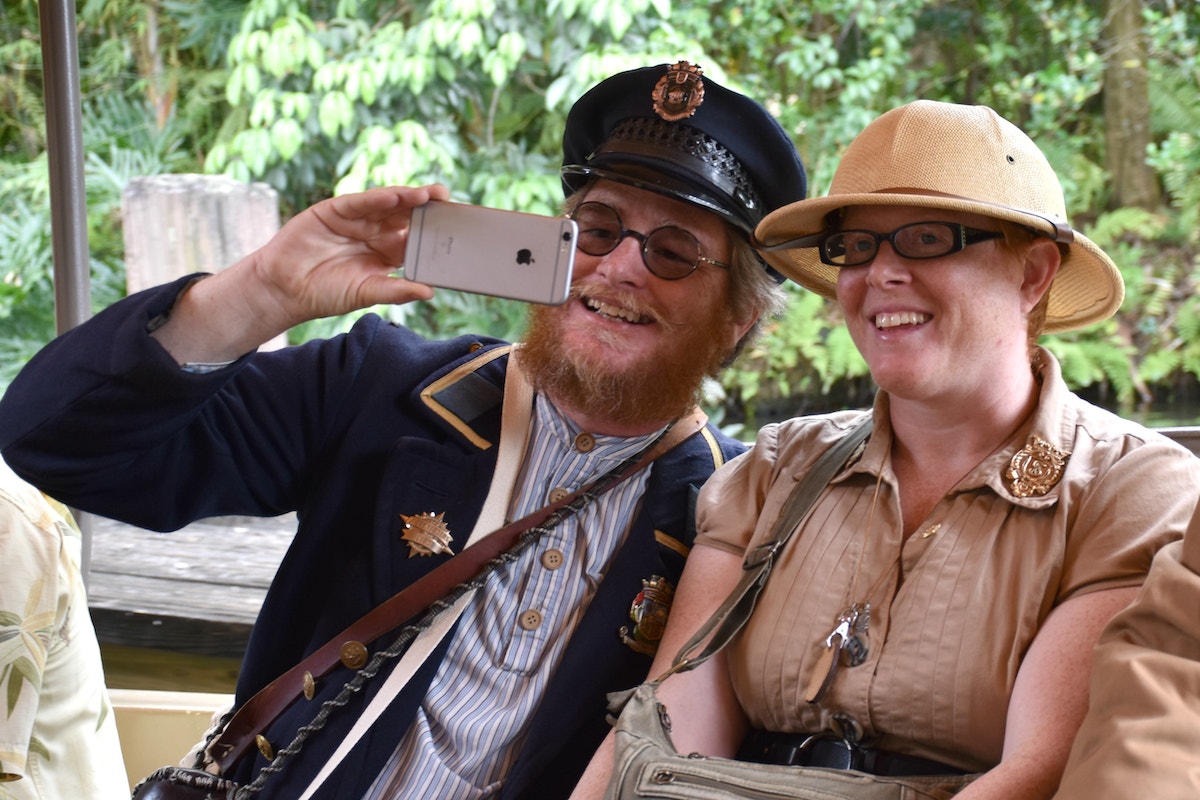 But it wasn’t all about the outfits. Adventureland Day is also about the hunt! Guests were broken into 3 large groups then given a map and storyline which offered carefully written riddles, tasks, and achievements leading to a special treasure. As guests completed the elaborate challenge they were given prizes from artists and creators like Trader Brandon, TikiTony, Tiki Doc, the Adventurers Project, Theme Park Preservation Society and Expedition Roasters.

Word of Adventureland Day was spread through social media where participants were given updates on where to meet and when, and dress-up tips to ensure compliance with Disney’s security guidelines. Roughly 300 Adventurelanders came from across the U.S. to participate and make new friends, including some from Hawaii, California and Virginia.

“We made it to Adventureland Day just in time to catch the last Jungle Cruise boat with the group at 4:15,” said Jeanine Gaston, an Adventurelander from Dallas who came to Orlando for her daughter Drea’s volleyball competition. “Though we were met by unfamiliar faces and didn’t don the proper jungle attire, the explorers welcomed us to join their party. We had a wonderful time and enjoyed the company of our new-found friends.”

Along with the treasure hunt, Adventurelanders took group ride-throughs of the Jungle Cruise and the Enchanted Tiki Room, adding special excitement and spirit for the lucky vacationers who happened to be unintentionally included. And what would a trip to Adventureland be without a tropical treat? The groups came together to enjoy Dole Whip floats and Citrus Swirls in what they dubbed “The Citrus Social.”

Previous
VIDEO: See How The Legendary Story Of “Mulan” Inspired The Film In This New Featurette

Next
PHOTOS: Work Continues on Roof of Former Wonders of Life, Upcoming Play! Pavilion at EPCOT