In just a few days, we’ll be able to pose with our friends and family in front of “Potatoland” photo ops, as well as catch an all-new exclusive Mickey Mouse short at the new Mickey Shorts Theater in Disney’s Hollywood Studios. To prep the former “Path of the Jedi” theater, aesthetic changes have been taking over the space, with new red, black, and yellow paint accents, and now a new set of posters outside. 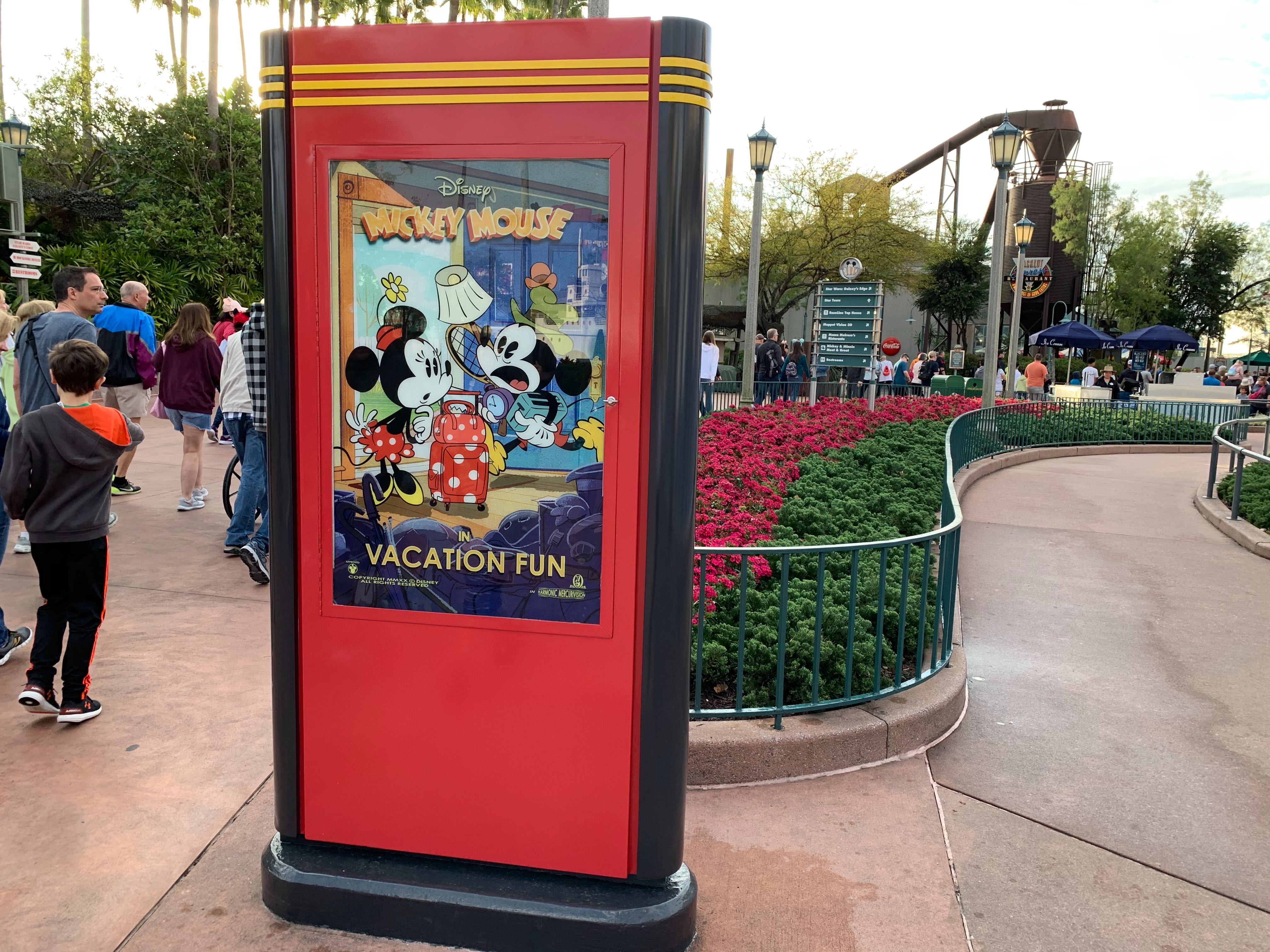 The new “Vacation Fun” Mickey Mouse Shorts poster features a frazzled Mickey as he stressfully attempts to pack at the last minute for his getaway. (I’m particularly fond of the stack of unnecessary things he’s carrying, like a whole lamp.) Minnie, on the other hand, is a seasoned traveler, and already has her polka-dotted luggage and carry-on perfectly packed. This is the new short that will be played exclusively at the theater. We’re sure many guests will see themselves as one or the other. 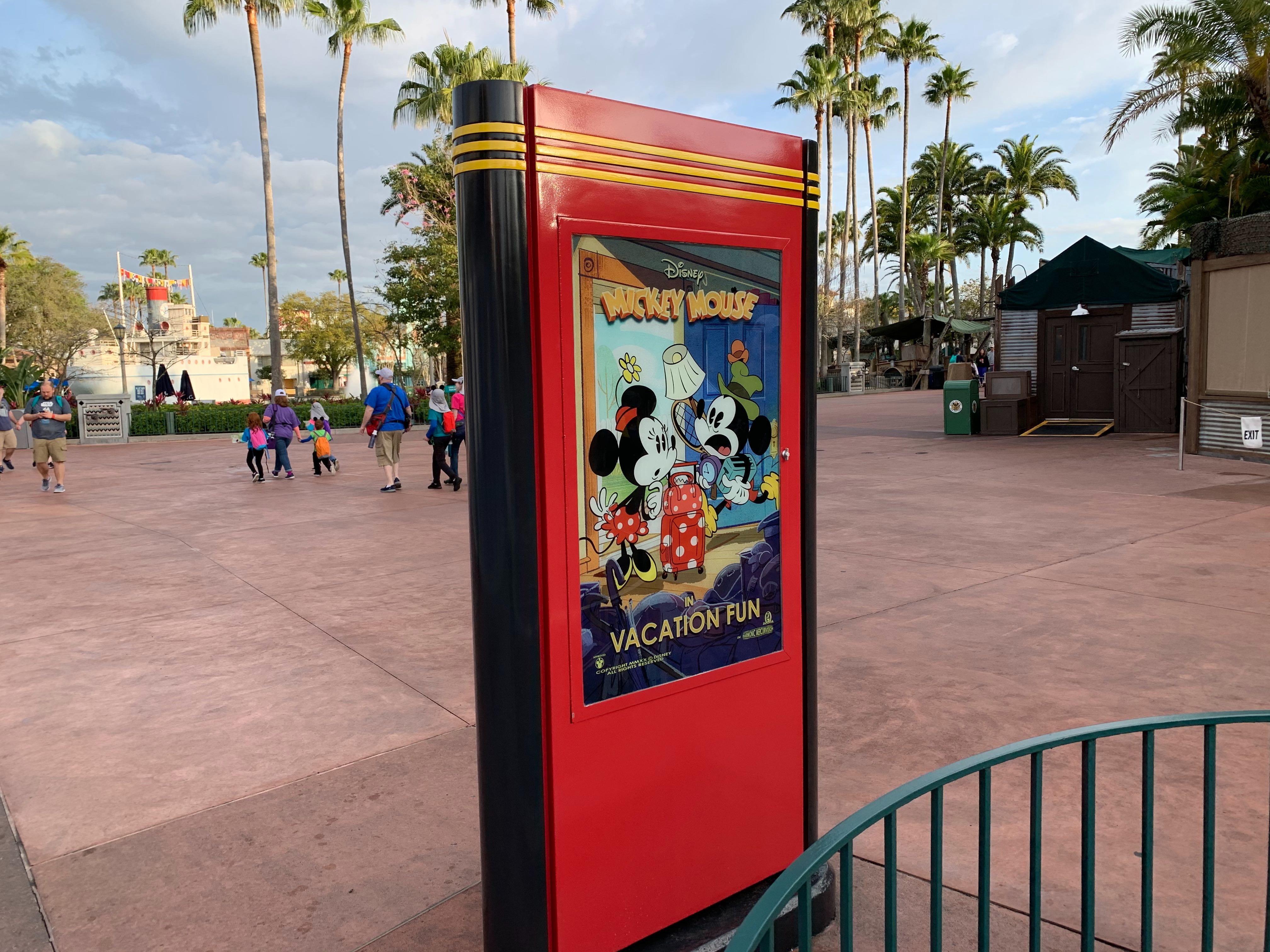 The new poster now resides in the old poster sign outside of the theater, which was recently painted to match the new sign and facade. Off to the side, you have the new marquee for the theater. 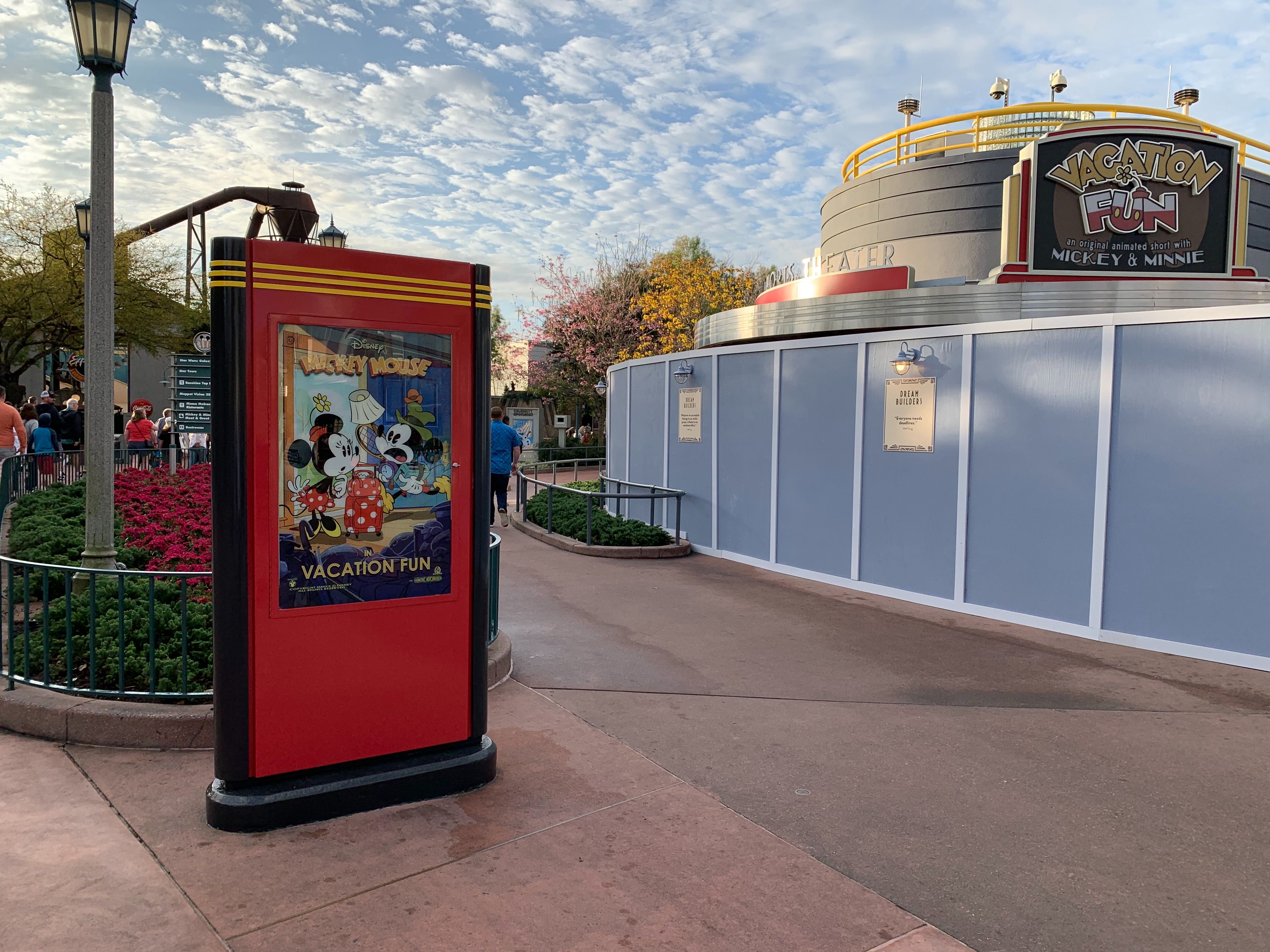 While the posters are cute, they inevitably replaced the old “Now Playing” posters that featured Muppet*Vision 3D and the Frozen Sing-Along Celebration, which had a distinct Art Deco style to them that seemingly matched the general aesthetic of the park better (at least in our opinion.) Between Mickey & Minnie’s Runaway Railway and the Mickey Shorts Theater, though, it seems like the park’s aesthetic is headed in a more character-laden direction. 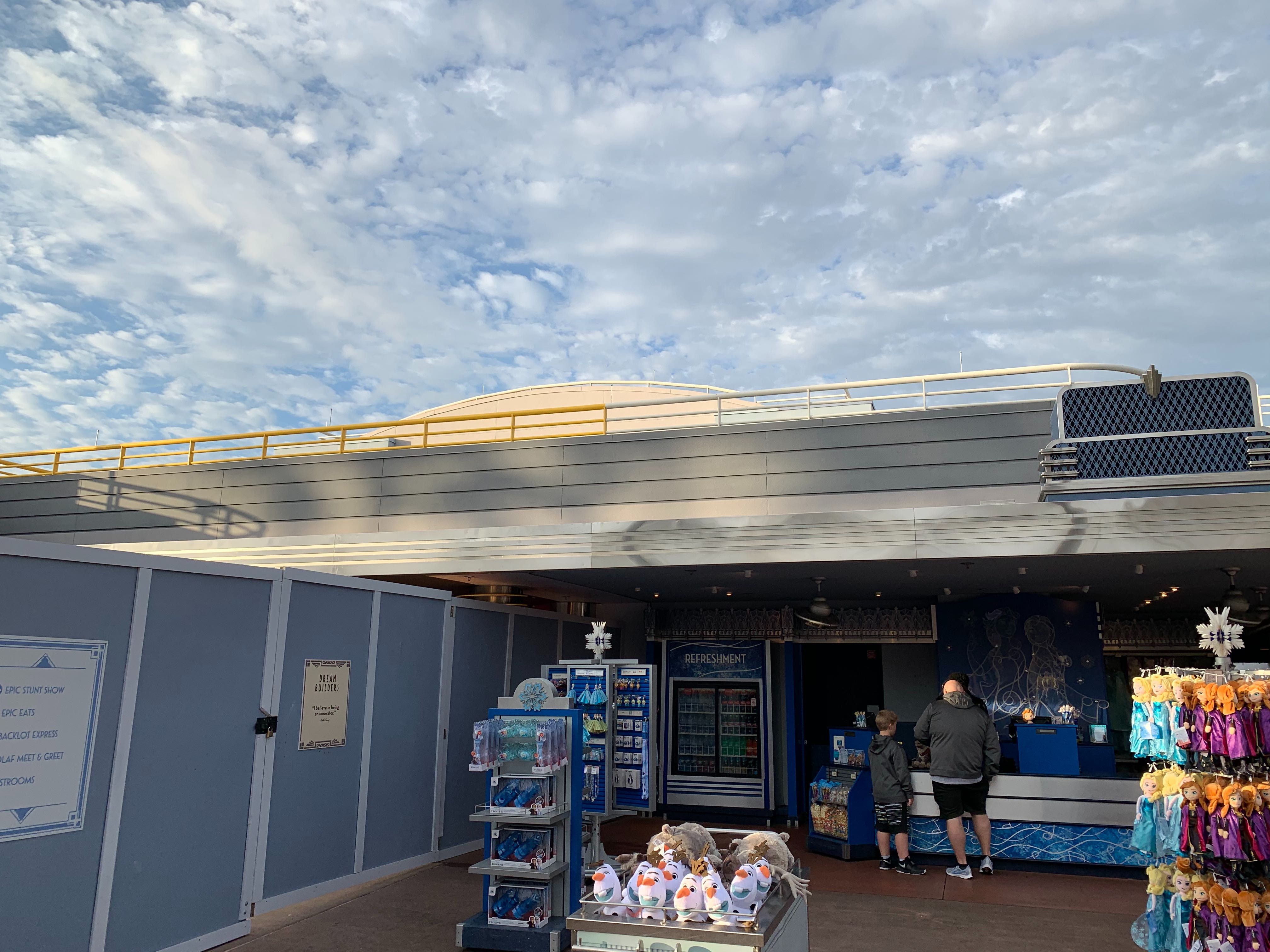 Over at the merge with the Frozen Sing-Along Celebration portion of the park’s Theater District, the yellow on the top railing abruptly stops so as to not interfere with the blue and white color scheme for Frozen. 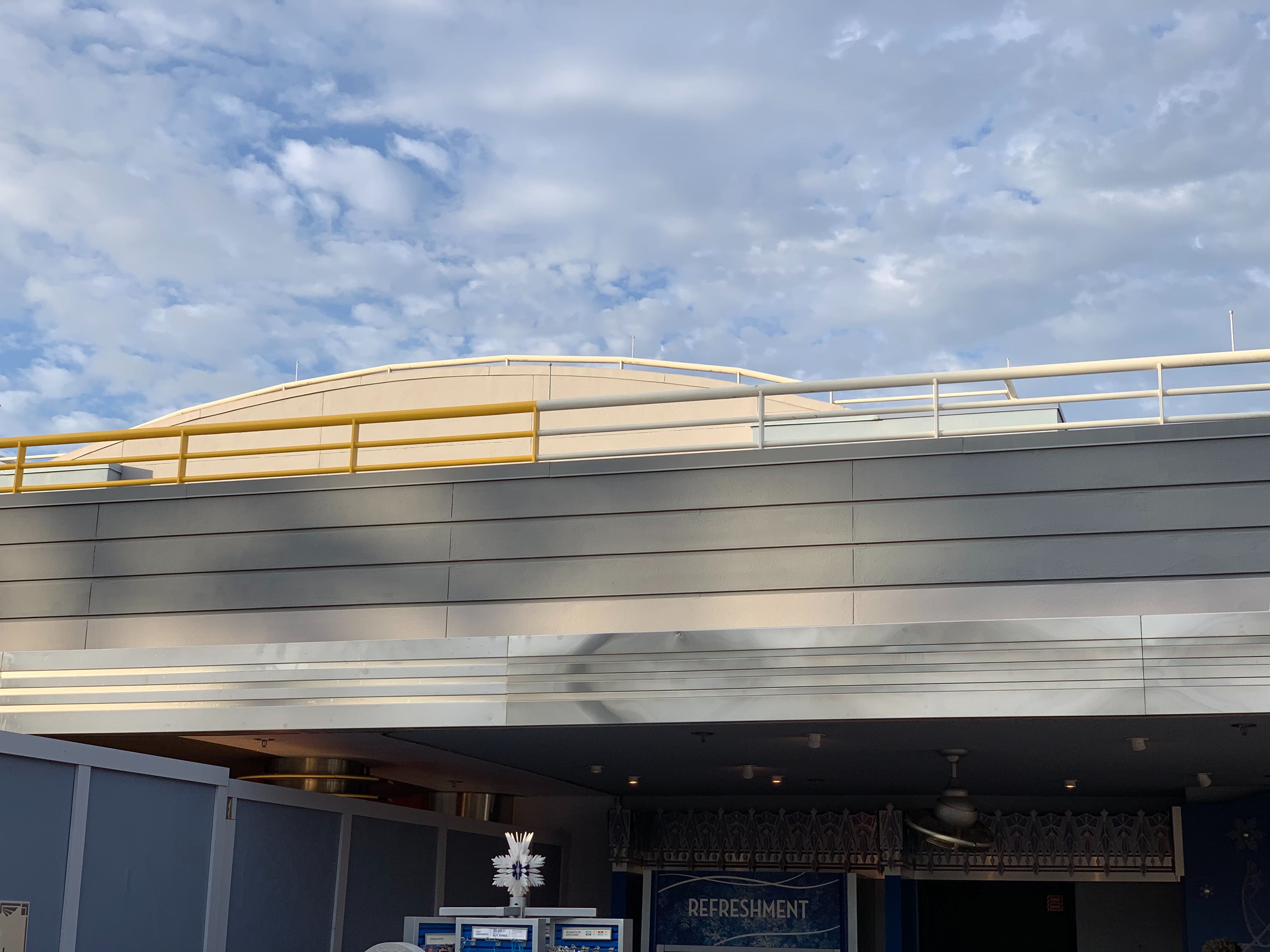 The theater, which is set to open on March 4th, will surely be a popular pairing with Mickey & Minnie’s Runaway Railway. At the very least, this theater will serve as one of the most popular air conditioning joints around!

We here at WDWNT cannot wait for Mickey & Minnie’s Runaway Railway, will you be in line with us on opening day March 4th?