With Disney Parks around the world closed for the foreseeable future, WDWNT is dipping into our archives of vintage parks materials for a look back into parks history! Today features a flashback to the early days of EPCOT Center with this booklet all about Spaceship Earth, given to cast members at the attraction during EPCOT’s opening in 1982.

Note: This article will detail the brochure page by page, but WIGS Members will have access to download a full-resolution PDF of the entire guide book. Head on over to Patreon.com/wdwnt to join WIGS, the WDWNT Inner Globe Society, for as little as $2 a month and unlock access to great content like this, and much more! 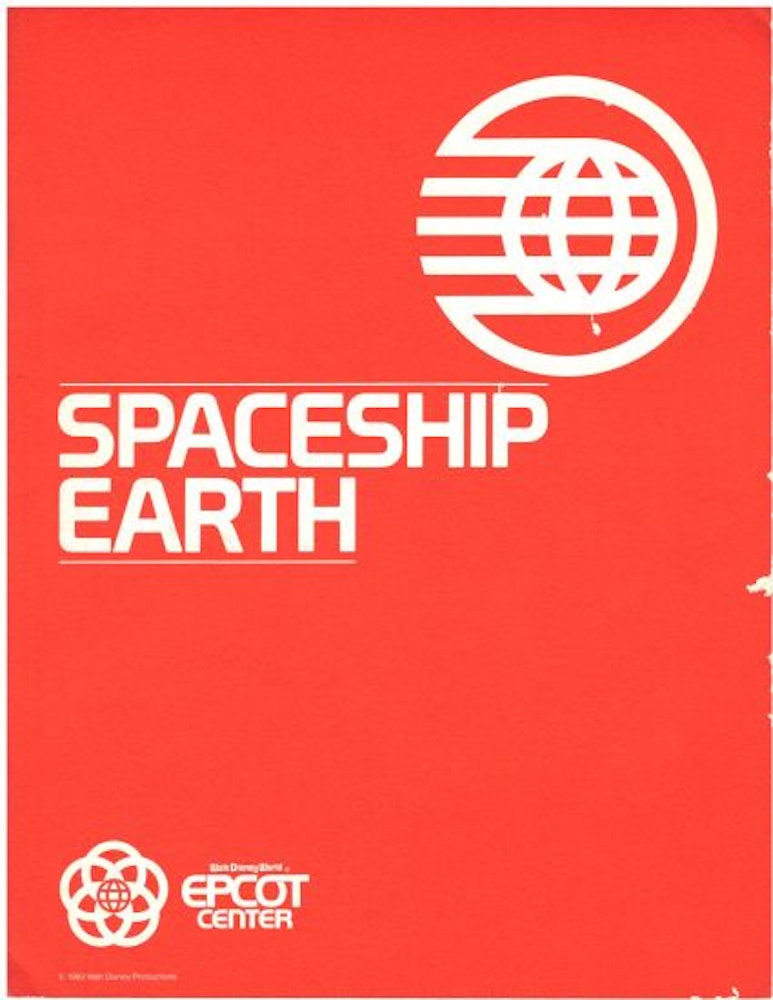 The booklet was given to the attraction’s opening day cast members, offering facts, explanations, and rare behind-the-scenes photos from the creation of this ambitious ride. 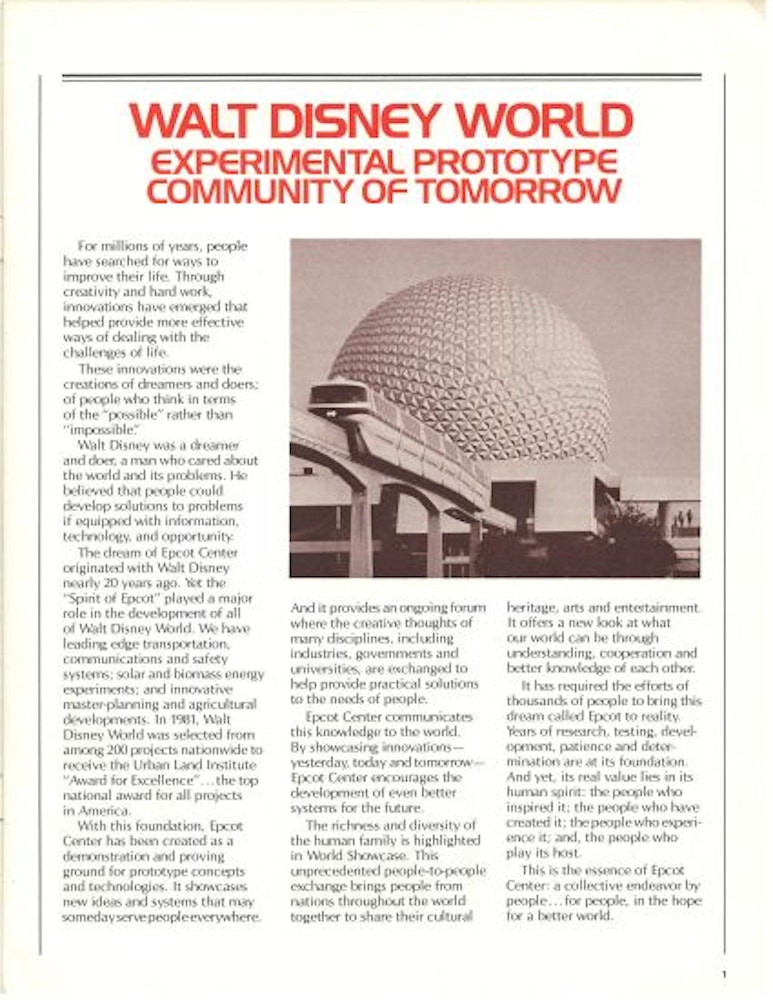 The booklet acts as a guide to the attraction and to EPCOT Center at large, offering a detailed description of the scenes guests would see in Spaceship Earth. It starts with a discussion of what EPCOT Center is supposed to represent: “a collective endeavor by people… for people, in the hope for a better world.” 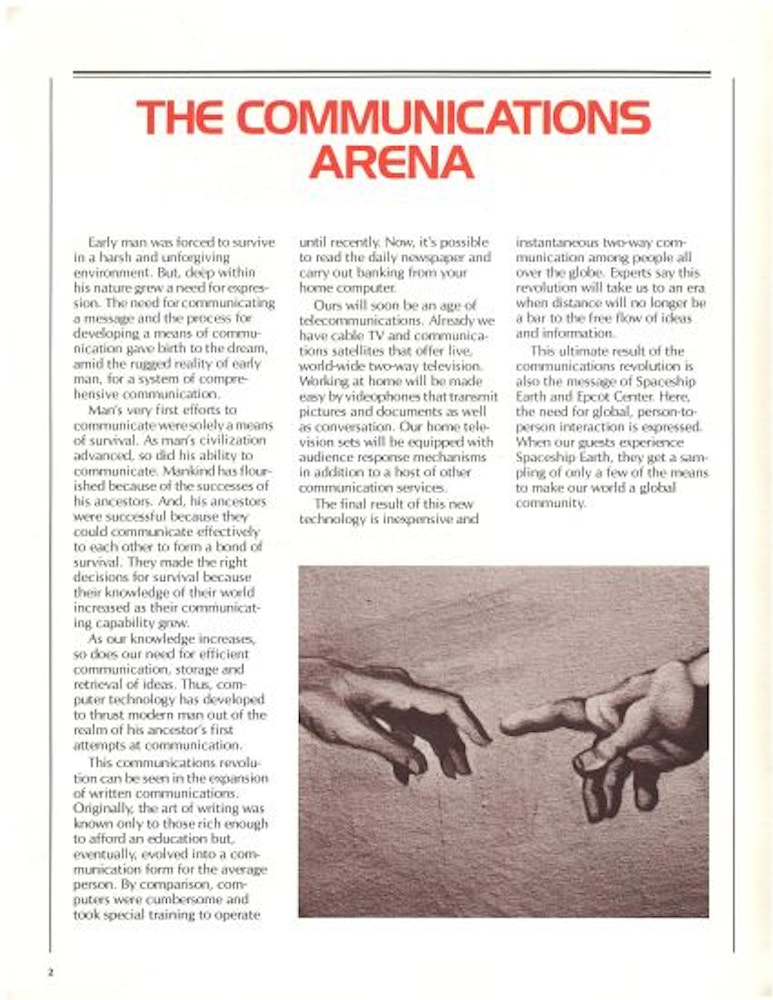 I particularly love these paragraphs discussing the purpose behind the attraction:

“Ours will soon be an age of telecommunications. Already we have cable TV and communications satellites that offer live, world-wide two-way television. Working at home will be made easy by videophones that transmit pictures and documents as well as conversation. Our home television sets will be equipped with audience response mechanisms in addition to a host of other communication services.

The final result of this new technology is inexpensive and instantaneous two-way communication among people all over the globe. Experts say this revolution will take us to an era when distance will no longer be a bar to the free flow of ideas and information.

This ultimate result of the communications revolution also the message of Spaceship Earth and [EPCOT] Center. Here, the need for global, person-to-person interaction is expressed. When our guests experience Spaceship Earth, they get a sampling of only a few of the means to make our world a global community.”

(I’m guessing those of you working at home can see how prophetic that was!) 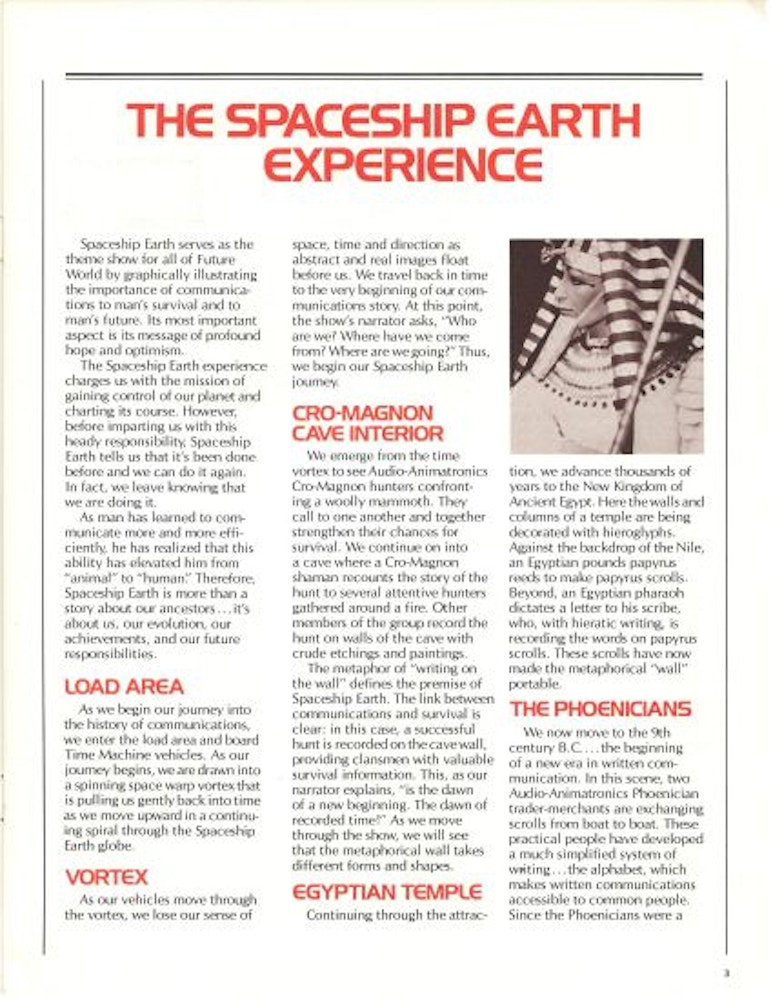 The booklet then goes on to describe the attraction, scene by scene. From the Cro-Magnon cave to the Phoenicians to the Renaissance to the Age of Invention and beyond, this offers a detailed explanation of the attraction. 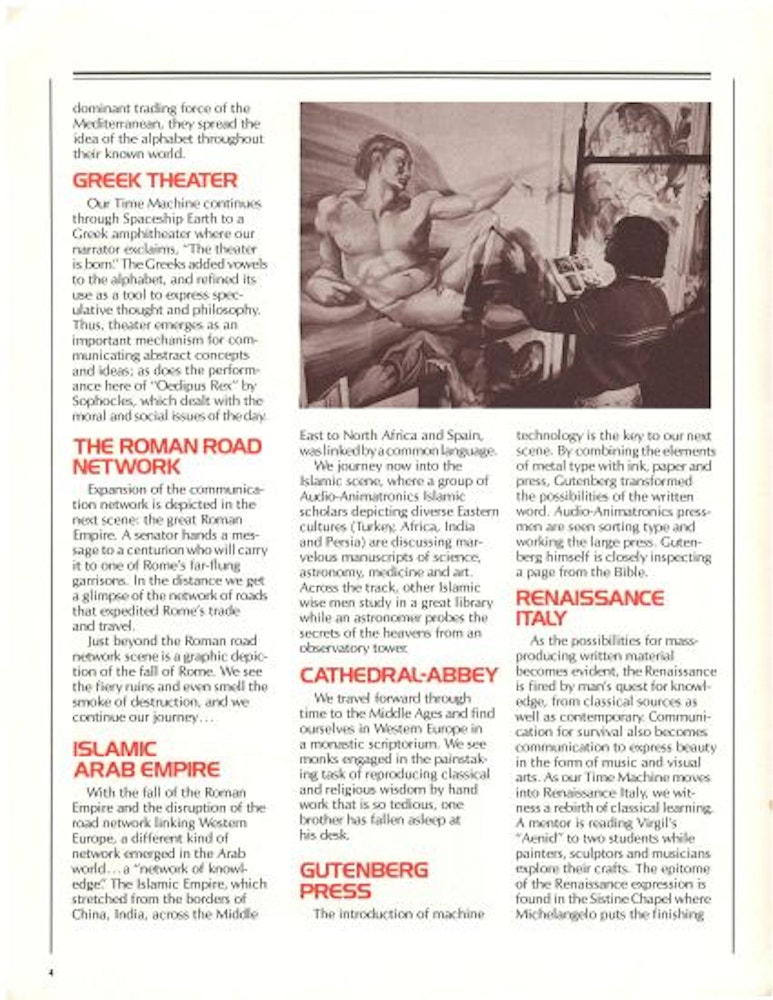 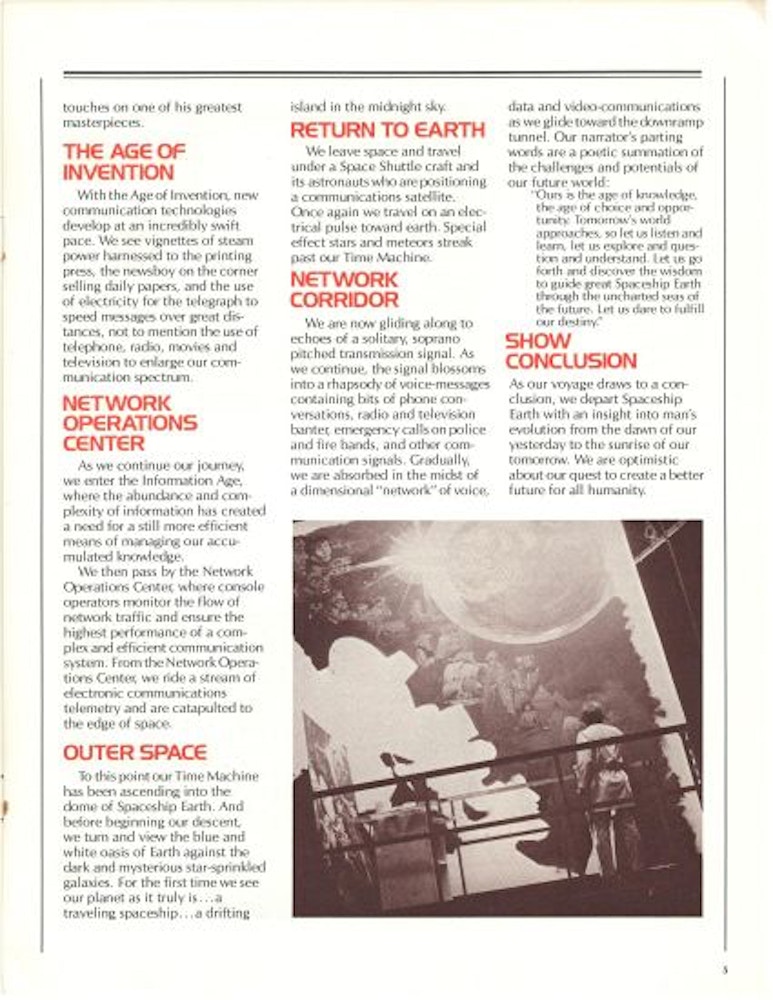 The booklet continues with a brief history of how the attraction was created, from the preliminary story treatment by legendary author Ray Bradbury to the level of detail that went into the scenes. Did you know that the pharaoh’s dialogue in the Ancient Egypt scene was taken from an actual letter from a pharaoh to one of his agents, or that the page Johann Gutenberg examines is an exact replica from a Gutenberg Bible from the collections of the Huntington Library in San Marino, California? 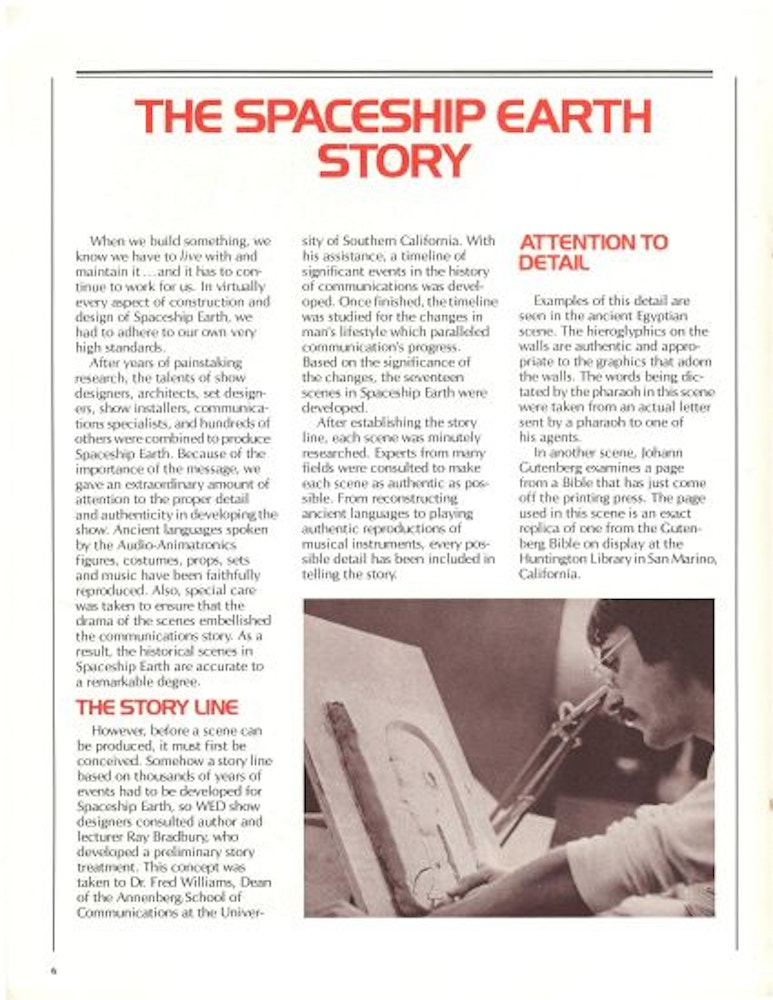 There’s also information about the construction of the geodesic sphere that houses the attraction. 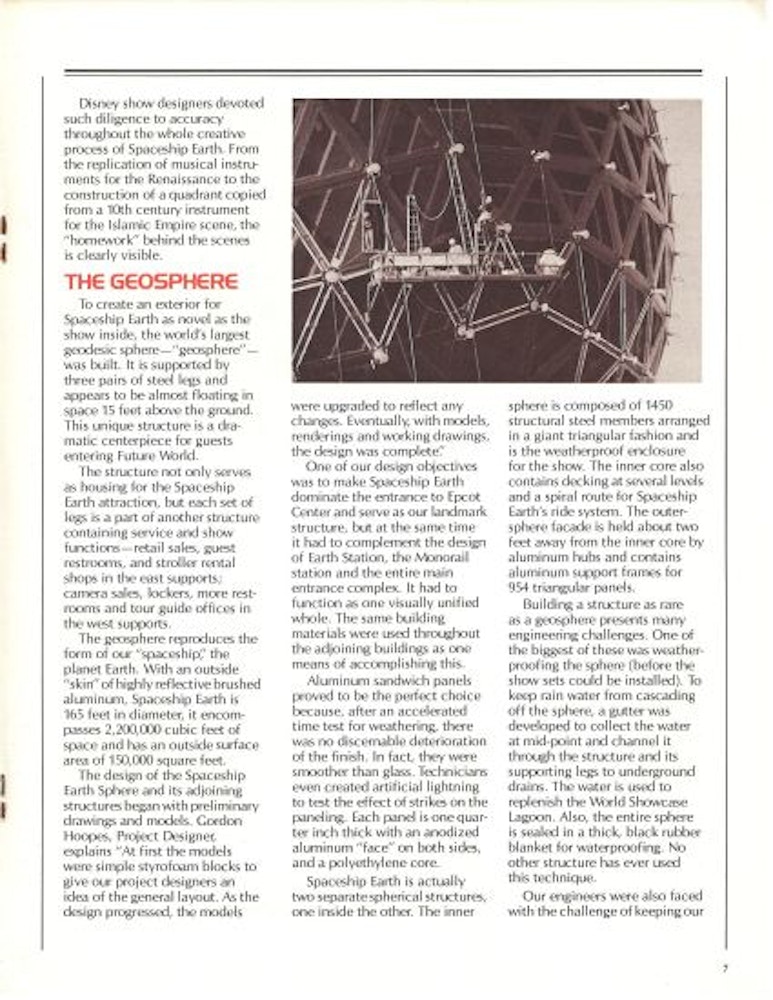 An interesting thing of note is that the design intent was to make the geosphere, the Earth Station post-show area, and the entrance and monorail stations a “visually unified whole.” The same building materials were used across this entire area to accomplish this goal. 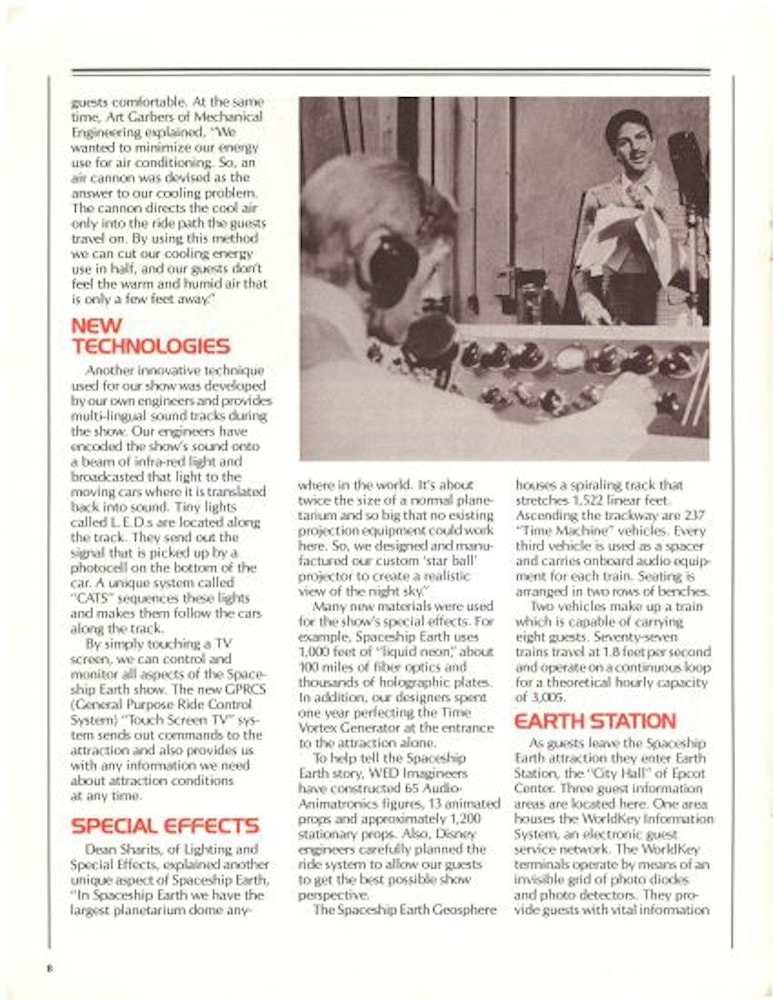 It also shows off the technologies that were developed for this ride, including encoding the sound onto infra-red light displayed by LED’s, which are then picked up by a photocell on the bottom of the ride vehicle. Also, did you know that when Spaceship Earth opened, the outer space scene featured the largest planetarium dome in the world? This forced Imagineers to develop a “star ball” projector that creates “a realistic view of the night sky.” 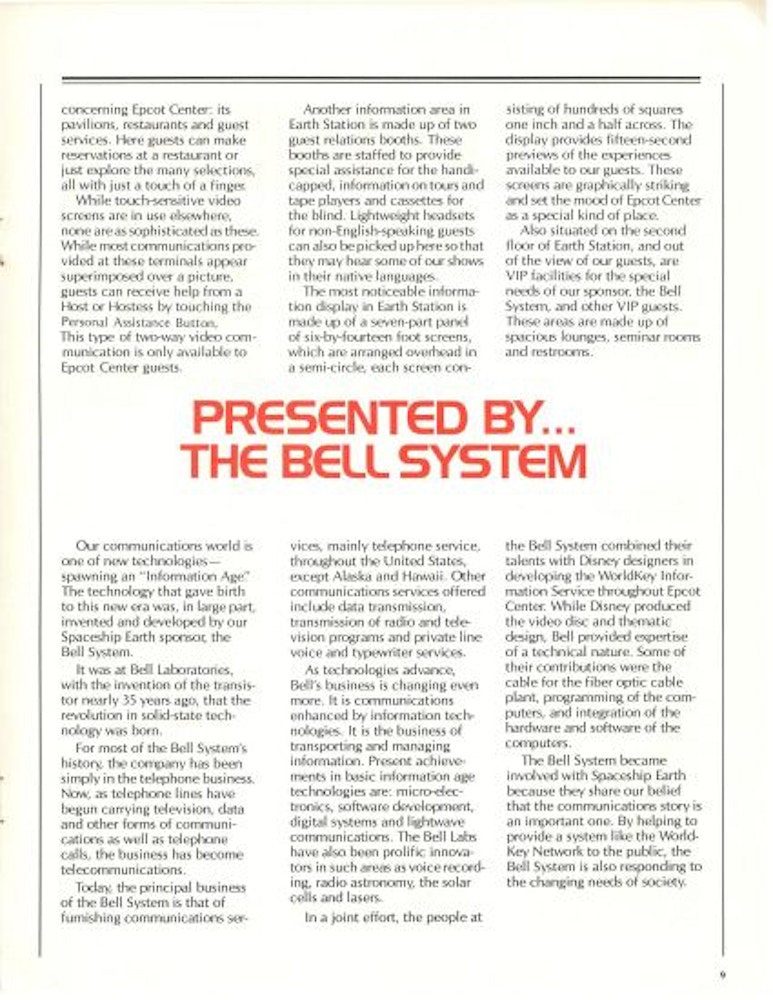 There’s also a description of Earth Station, which served as the original “post-show” experience for the pavilion as well as one of the homes of the WorldKey system, which allowed guests to video chat with a cast member to make dining reservations, find out information about other EPCOT Center attractions, and more. 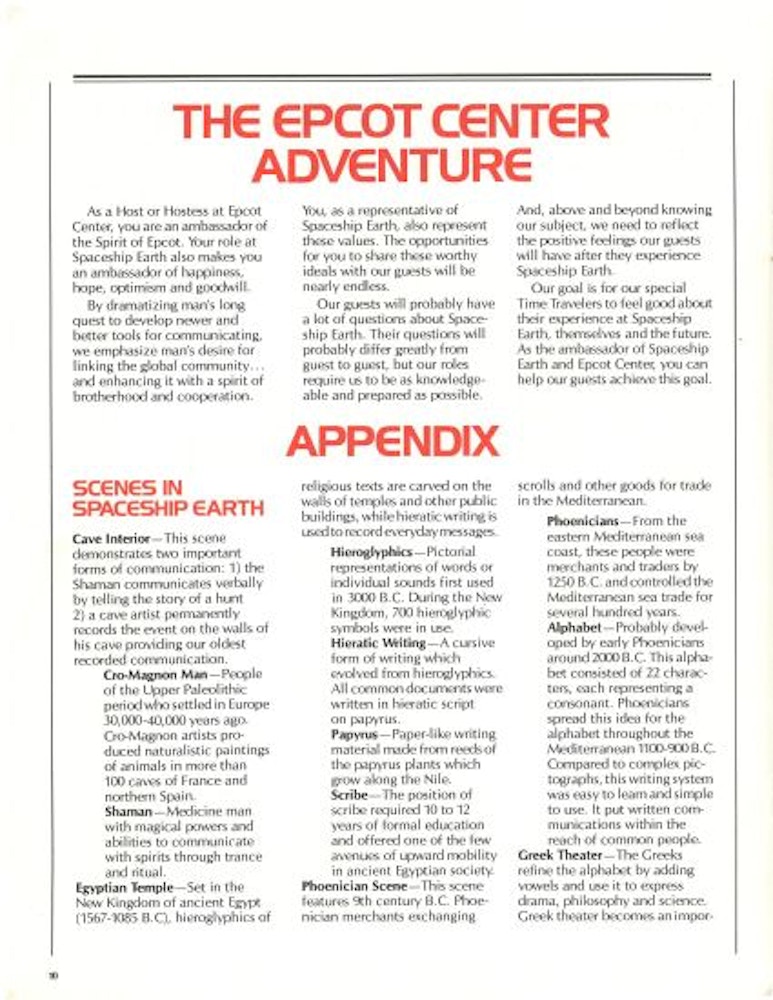 The booklet concludes with an appendix, explaining certain terms and elements seen in the ride, as well as a listing of facts and figures about the ride and the history of the geosphere. For media fans, it includes a listing of the films and television clips seen in the Age of Invention scene, including Top Hat, 20,000 Leagues Under the Sea, “Walt Disney’s Wonderful World of Color,” and the 1964 NFL Championship Game between the Baltimore Colts and Cleveland Browns. 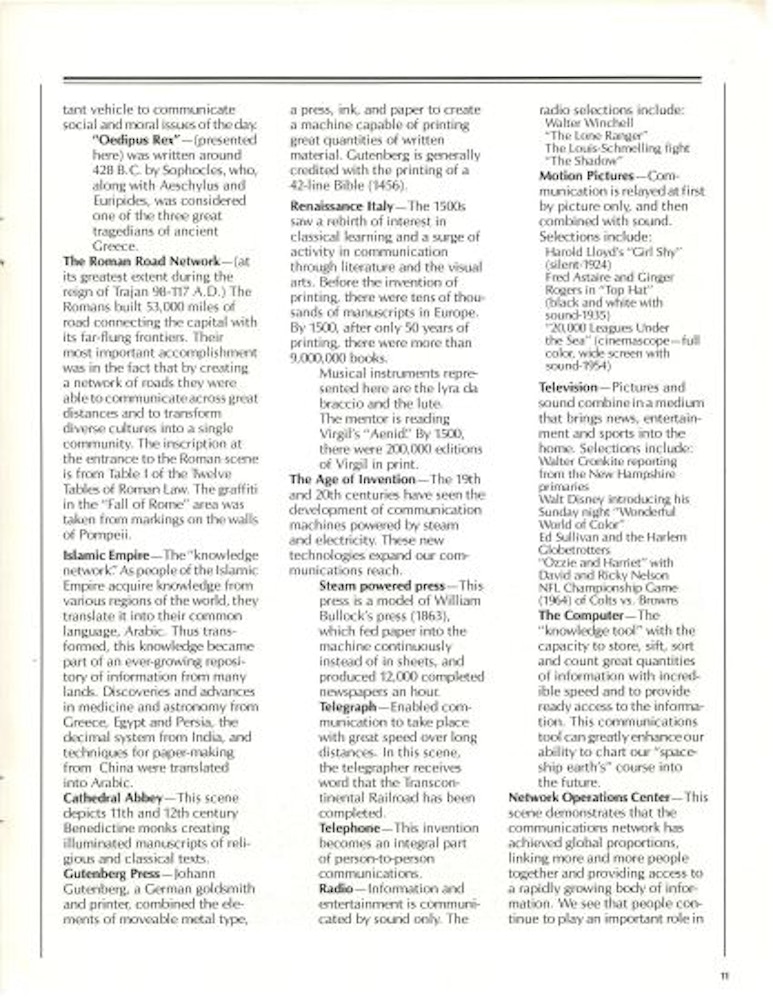 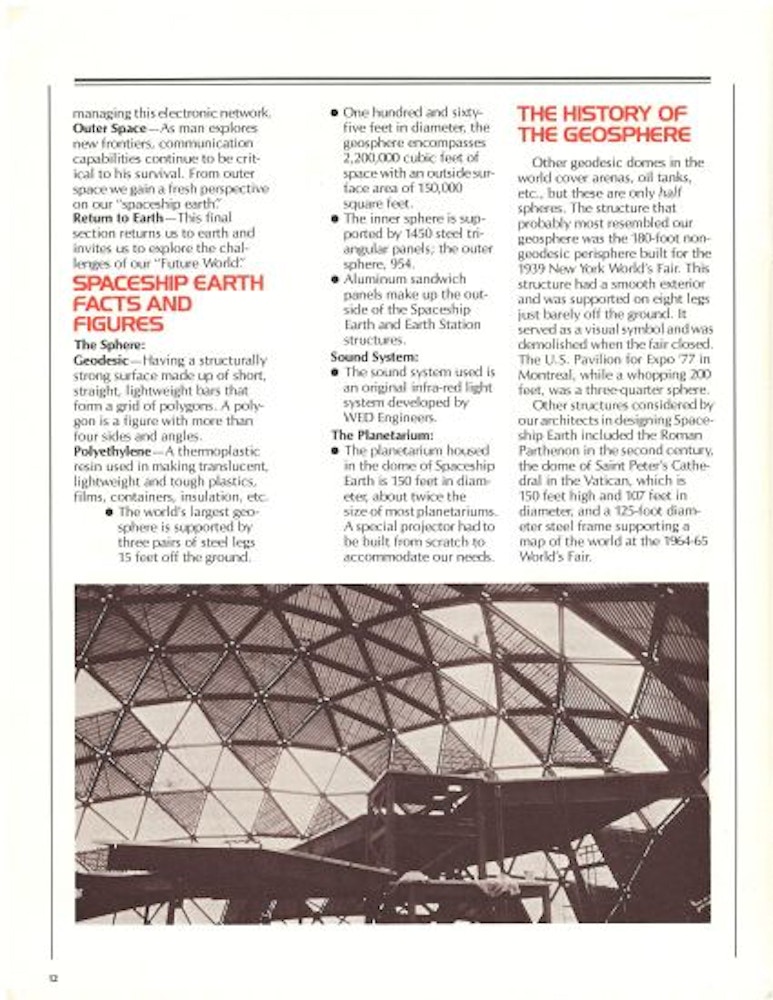 This is an incredible resource for die-hard EPCOT fans, offering a fact-filled trip back in time to 1982.