Imagineer Joe Rohde has been taking Disney fans on an online digial tour of Disney’s Animal Kingdom through his Instagram, providing deep backstory on its ethos and culture. He’s discussed the Tree of Life and Africa, and today we follow him through Asia as he discusses the beautiful Anandapur and Maharajah Jungle Trek!

“At Disney’s Animal Kingdom, Asia really means South Asia and Southeast Asia, where you find Tigers….We have styled the entire thing as The Kingdom of Anandapur. It’s something like India something like Nepal and something like parts of Indonesia.

As with Africa, we want everyone to have a sense of going on an adventure, so even if you were from India, you walk around here going “I haven’t been to this part of the country”… A purist could criticize this as being kind of expropriation and amalgamation, but we try to be careful and we really do want to transcend any particular country and stick with the idea of animals and the people they live with.

“It’s important to remember that all of these lands are fictional. And because they are fictional, they have been edited and focused in an artificial way….

Our Asia is focused on the harmony and disharmony of use of space. Habitat competition vs accommodation. The tigers live in an abandoned hunting lodge. The white water raft trip goes through an illegally logged Forest. The train in Expedition Everest cuts through a forbidden part of the mountains. The Gibbons and Siamangs live right in the middle of town amidst ruins under restoration. This is a bit of design hyperbole, but it’s meant to indicate this idea of humans and animals living cheek by jowl in the same spaces.”

Ever take a picture next to that ruined shrine with the big paws? Joe fills us in on its history...

“This was inspired by multiple sources. One was Sigiriya in SriLanka where there is a truly huge set of claws left over from a giant lion. One is Mahabalipuram in India where there are colossal stone animals. The other is at Angkor Wat, colossal human sculptures in ruins with roots overgrown.

Ours is a tiger. So it could have been an old Hindu shrine of Dawon the tiger-lion who is variously ridden by Durga, Kali or Parvati. Or a Buddhist shrine to Padmasambhava who also rides a tiger. But it’s in ruins so we cannot tell.”

Moving one, Joe gives us a little insight into the queue for Kali River Rapids…

“In the queue for the Kali River Rapids attraction are murals on the ceiling depicting traditional Buddhist parables in which animals act out moral precepts. These are called the Jataka Tales. The ceiling of this building, indeed the entire building is loosely based on a building on the island of Bali called the Kerta Gosa. It too has a lavish painted ceiling with a very similar carved ornament at the very peak.

All the murals that you see in the building are original. They were painted by an old Balinese master painter. When we started the work, I brought him a full set of western watercolor brushes as a gift. He chose to paint all those murals with his traditional tools…Split pieces of bamboo which he cut with a knife and smashed to create a brush.”

Let’s head into the Maharajah Jungle Trek with Joe to look at, not only the animals, but the artistry… 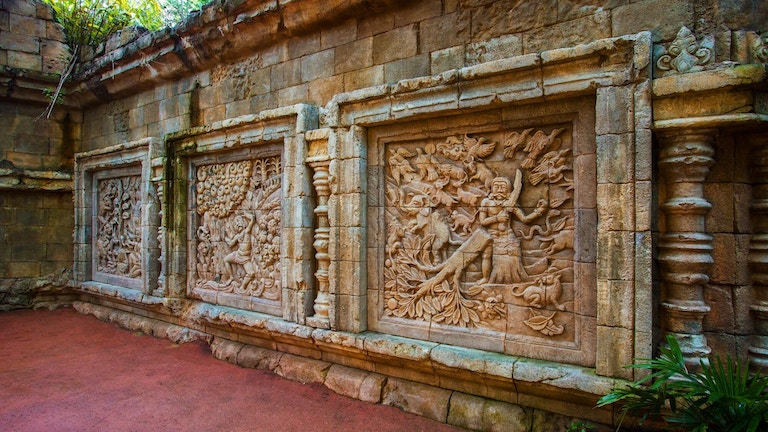 “There are three distinct mural sequences in the Maharajah Jungle Trek. There are the tiger murals, which if you look closely reveal antique scenes of tiger hunts, making it clear that there used to be way more tigers. By the way, some of these shots are from inside the tiger area…when the tigers were not there. The second group in this sequence are the carved stone murals (real stone carved in Bali) representing a little moral tale in which man comes into the forest, cuts down the forest, and disaster follows. In the final frame the animals and the man have reconciled and nature begins to bloom again. The last set of murals are meant to depict the four great kings of Anandapur.”

Before we leave, we must check out the Tigers! 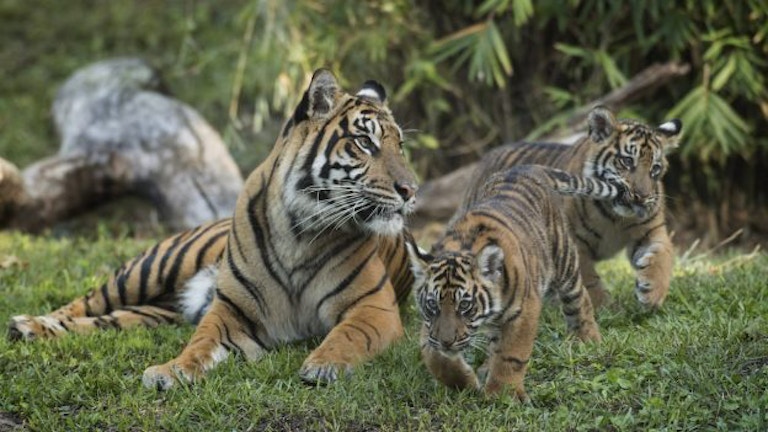 “When we opened, we had Bengal tigers who had grown up together. I believe they were all sisters….. The Tigers you see today are Sumatran Tigers, which are an important Conservation challenge. For those who are concerned about where animals like these come from…Rest assured they are not captured in the wild. Ironically, there are almost none left in the wild. At any legitimate accredited Zoological facility, ours included, those animals are part of international networks committed to maintaining healthy and genetically Viable populations.

When we started conceptual work on Disney’s Animal Kingdom in 1990 estimates are there were as many as 100,000 tigers in the wild. Today there are maybe 3500….Thanks to global effort’s some tiger numbers are stabilizing. That doesn’t mean much unless we do a lot more to protect jungle habitat with enough animals in it for Tigers to eat.”

Join is soon in Part 4 as Joe take us all to the thrill of Asia – Expedition Everest!