Given the ongoing pandemic and the fact that it’s been weeks since the parks closed indefinitely, I’d give anything for the chance to actually eat at a McDonald’s instead of chowing down on rubbery, cold McNuggets while wistfully staring out of a window at the vacant outside world. Thankfully, work on the only remaining McDonald’s on Walt Disney World property continues despite the park closures and construction holds… and I’m unabashedly excited to eat here once it reopens. Progress on the newly-rebuilt location has come a long way since we last checked up on it, with solar panels installed along the V-shaped roof, plus some fun decorative elements to the exterior. Let’s take a look at how it’s coming along. 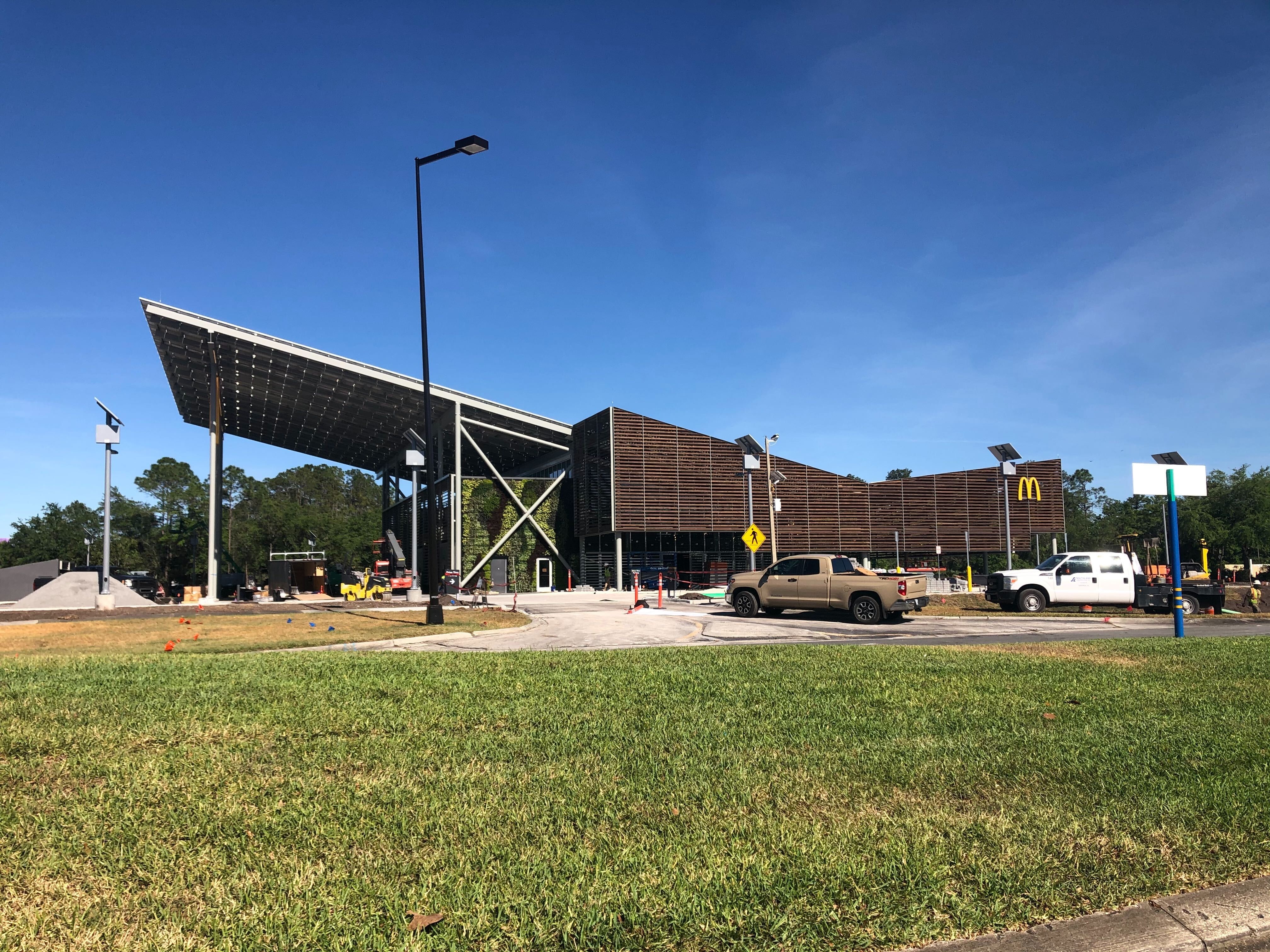 As you arrive at the McDonald’s, you’ll notice that the bright yellow perimeter fencing that had been installed has since been taken down, given that the location is actually close to finished already. It would certainly seem that in the time Disney normally takes to refurb a ride or random corner of a park, an entire restaurant has been demolished and re-erected. 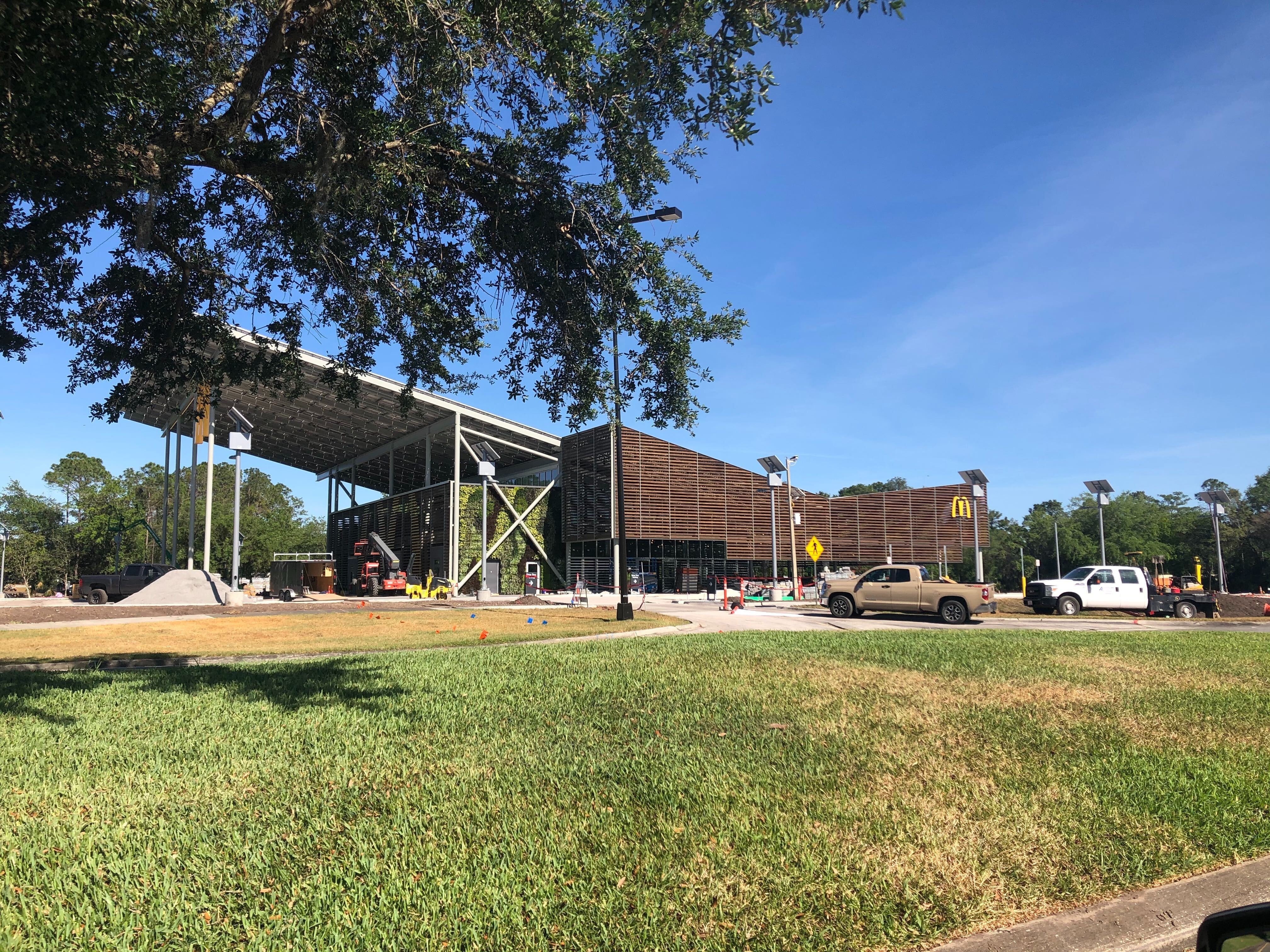 The McDonald’s, which is located at 1596 W. Buena Vista Drive, is one of the first things guests see approaching the gates of Disney’s All-Star Resorts. The restaurant, while priced slightly higher than other McDonald’s, proved to be so popular with All-Star guests, that they had to build a dedicated crosswalk to it for easier access. It’s a popular spot for guests rope-dropping parks and looking to grab some breakfast before heading out, and also for guests arriving late to their rooms after Extra Magic Hours or an After-Hours event. Work continues with a dedicated crew of contractors still putting final touches on the restaurant and its surroundings. 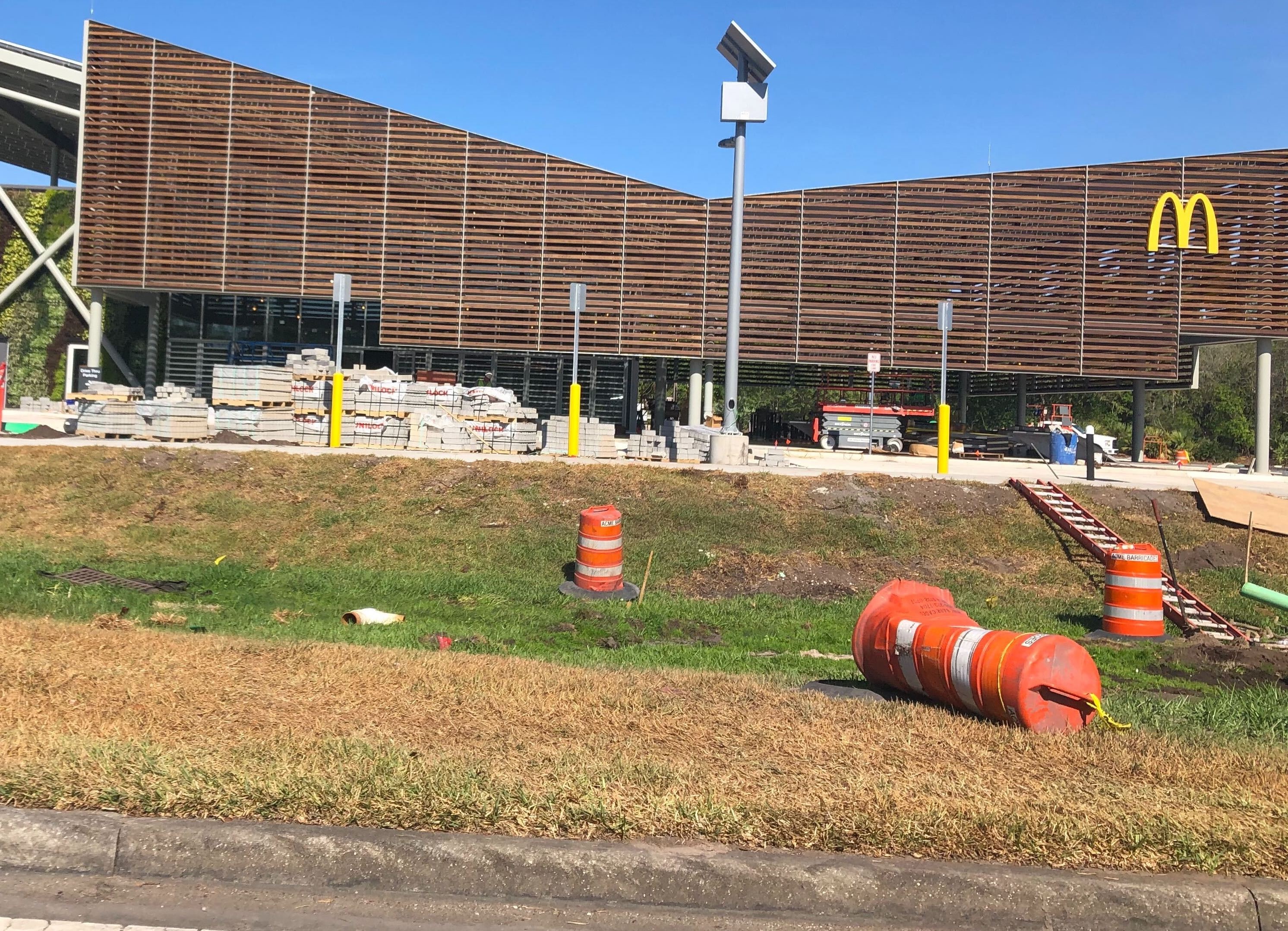 Looking out through the restaurant, you see the main indoor dining area to the left and a large, open-air dining space to the right. We assume the drive-through will wind around the back portion of the McDonald’s. The design of the restaurant seems to borrow from retro McDonald’s styles with the V-shaped roof, plus an eco-friendly twist as the roof is actually lined with solar panels. 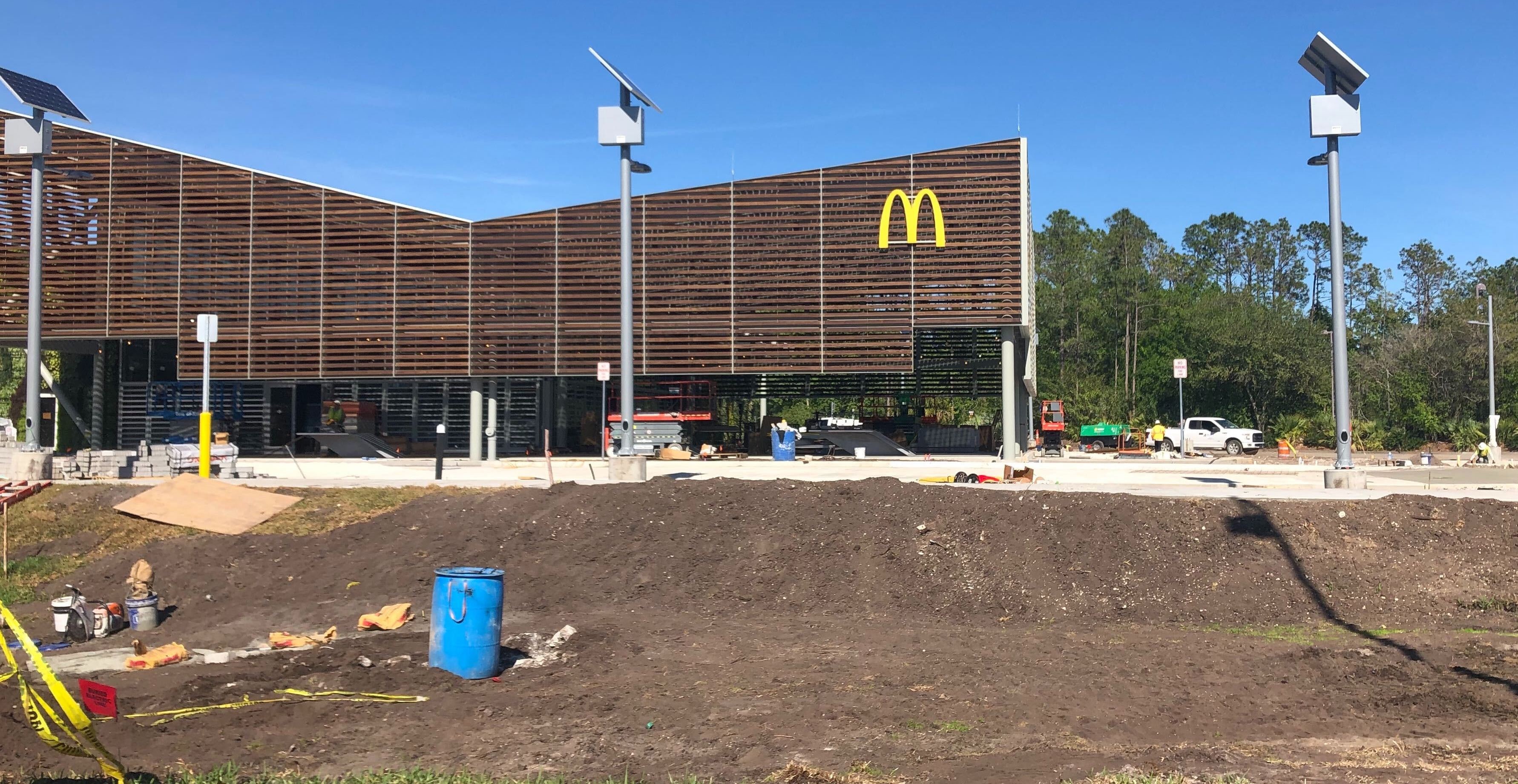 A row of solar panels line the side of the restaurant, as well, to power the lights surrounding the parking lot. 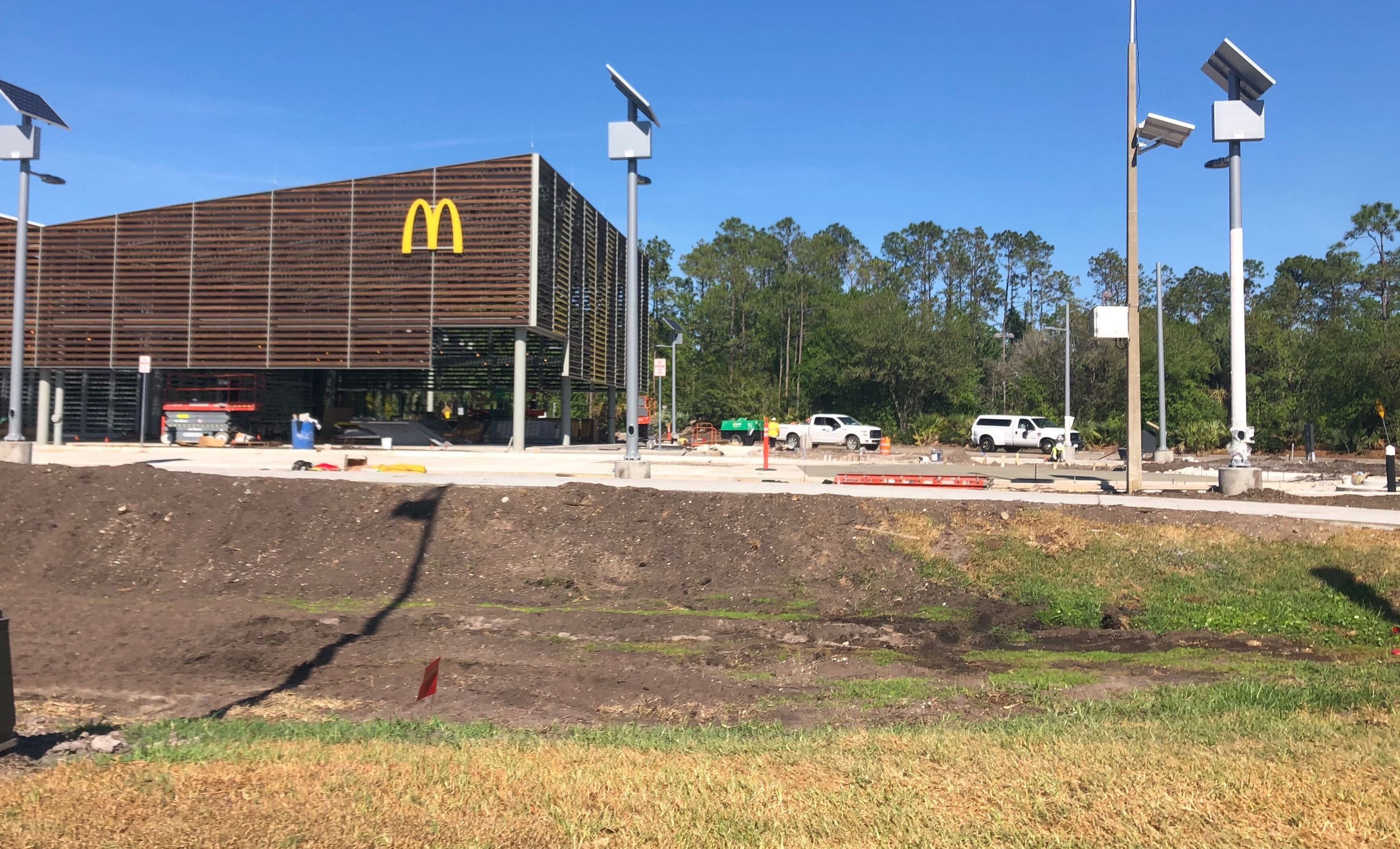 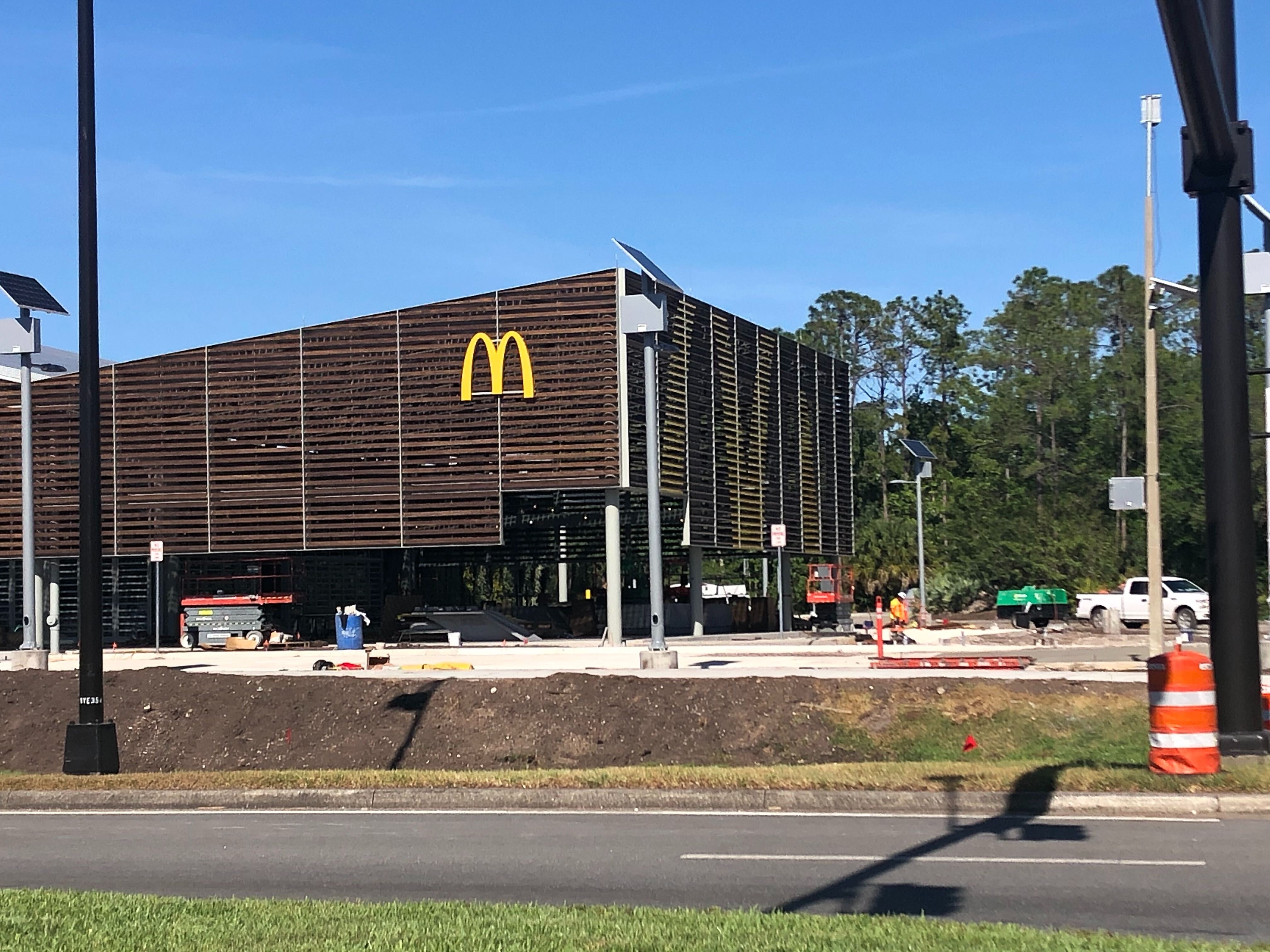 The wooden slats that surround the restaurant’s exterior form a set of golden arches on one end. 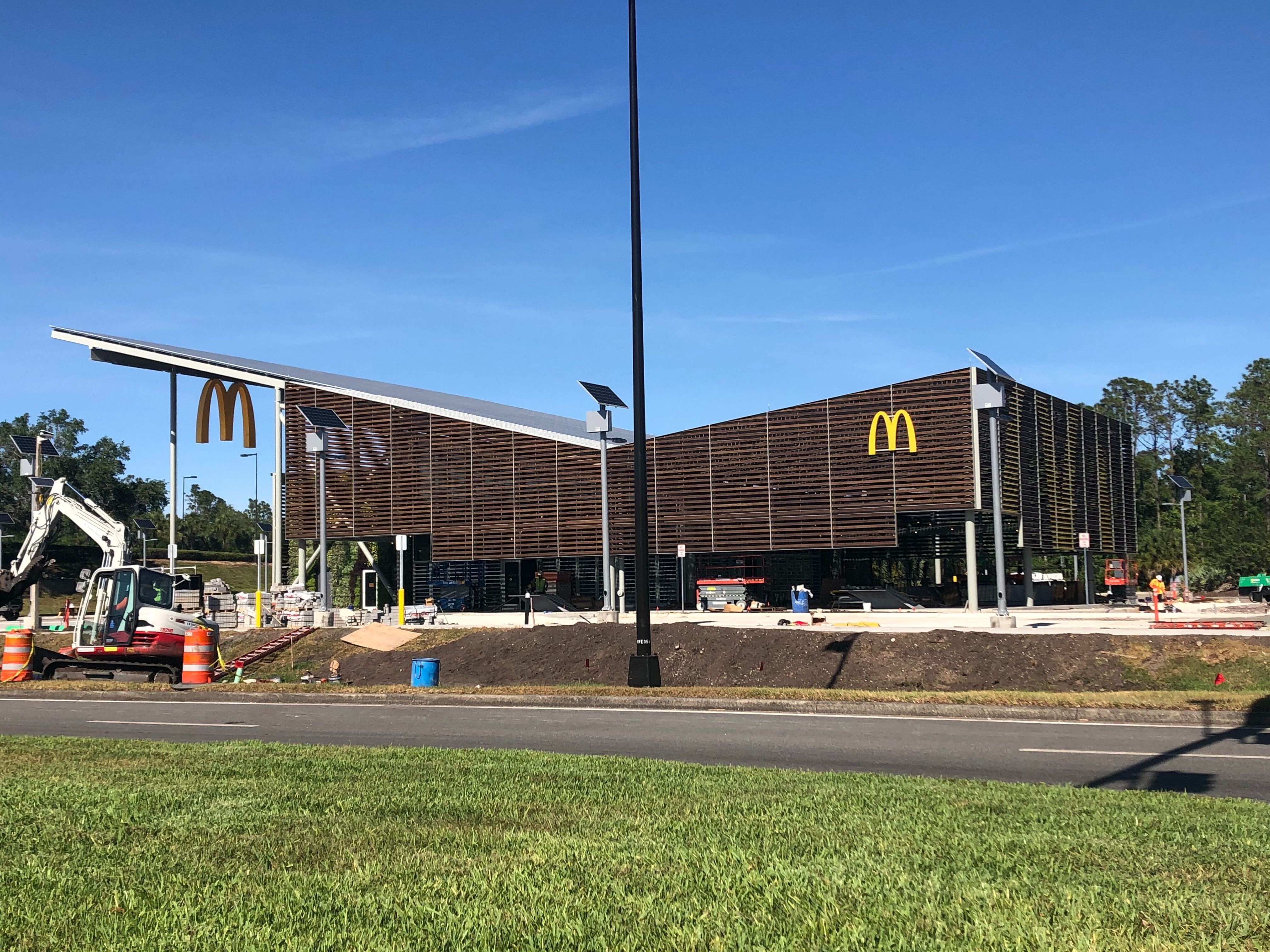 There’s also a McDonald’s logo on the side of the restaurant, and one hanging from the roof… 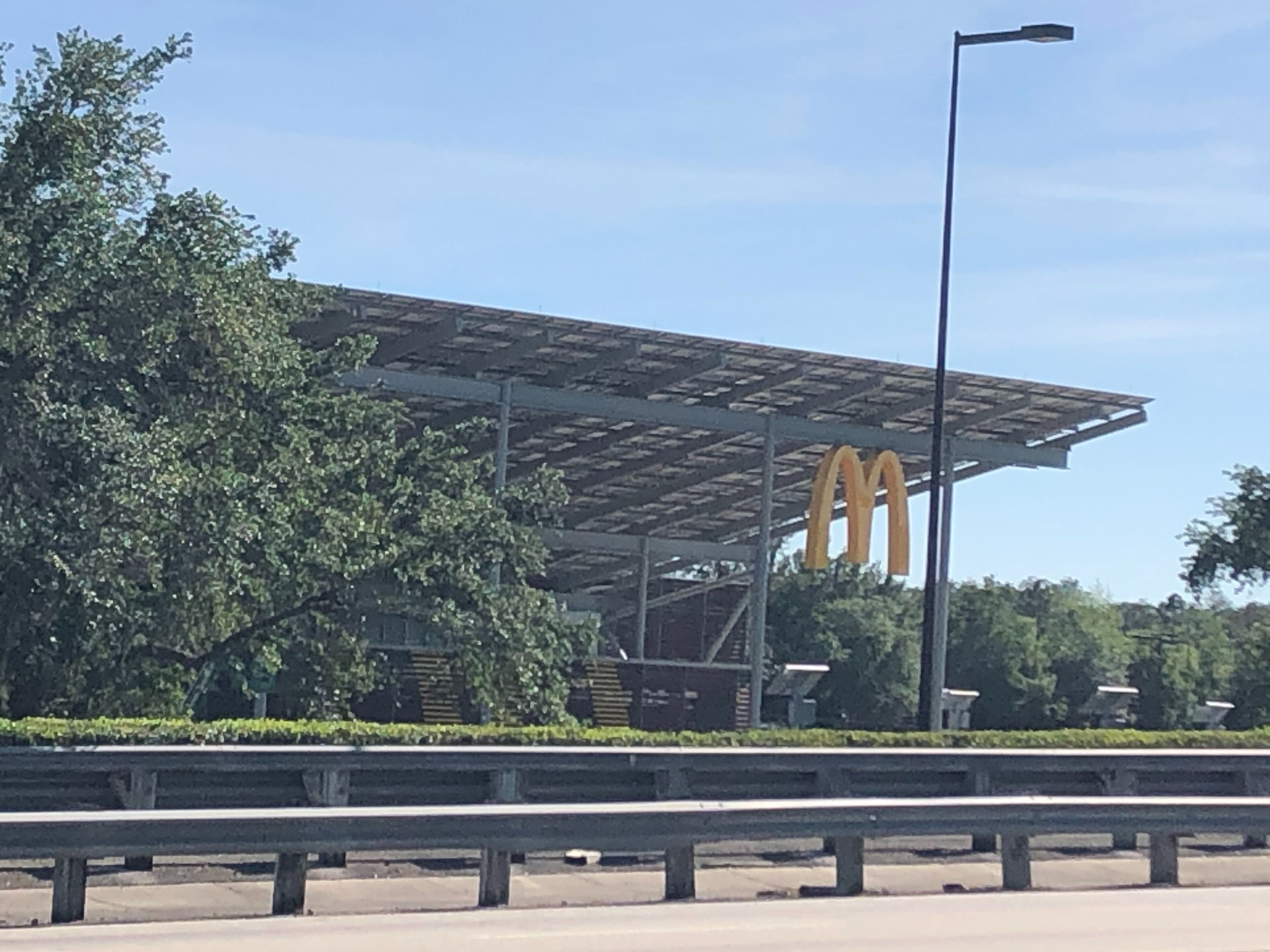 So you can even see it from the highway. There’s another set of wooden slats that make up the golden arches on this end, as well. Off to the sides, a vertical garden forms a vague Mickey shape for just a slight Disney touch. 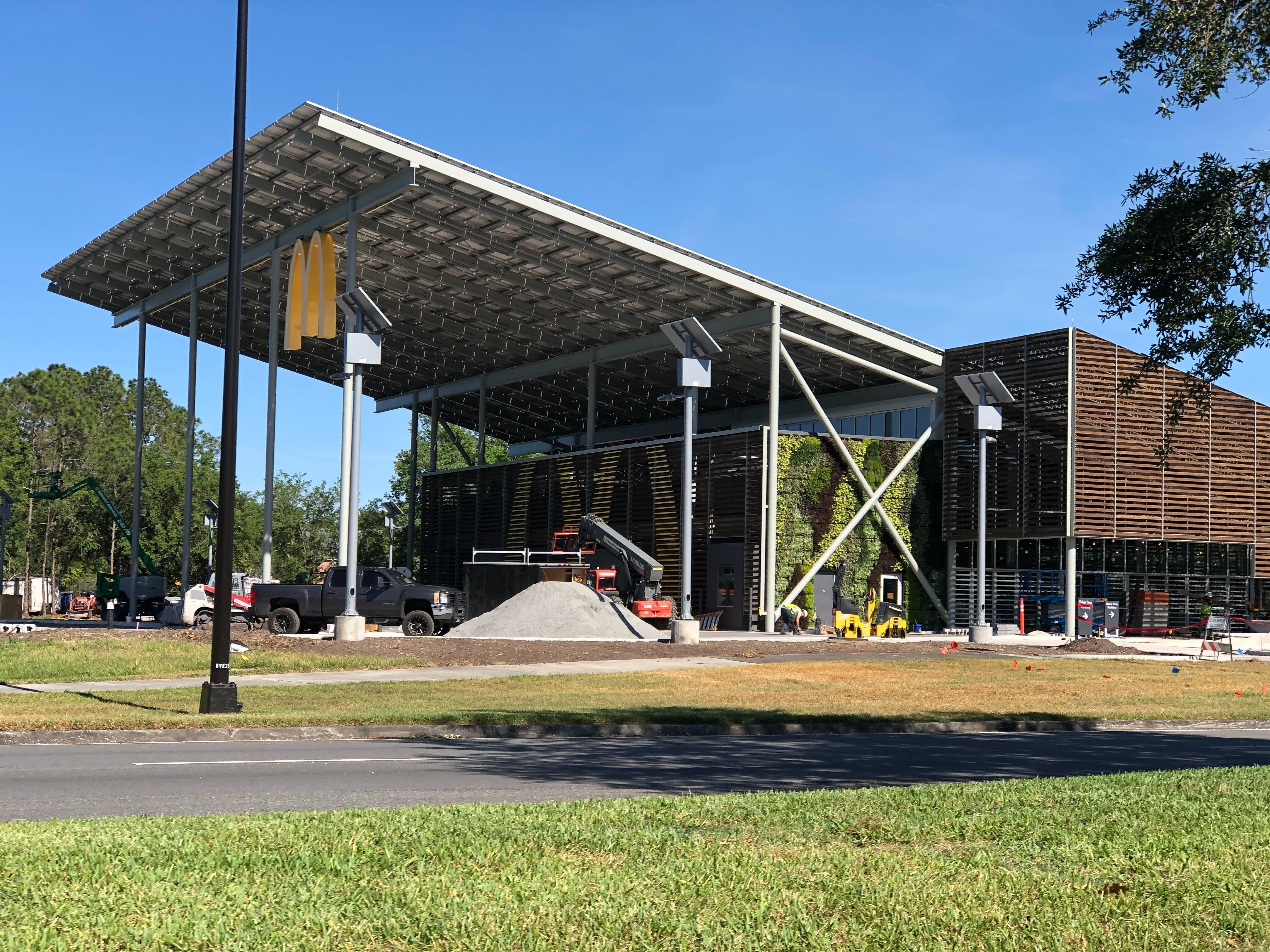 This new McDonald’s replaced its former 2009 version after a number of makeovers across the years. Many may recall this McDonald’s by its former wacky exterior featuring larger-than-life figures of Ronald McDonald, Grimace, and anthropomorphic menu items, like fries, Happy Meals, and McMuffins. The McDonald’s originally opened back in 1998, a year before the opening of Disney’s All-Star Movies Resort, which marked the completion of the All-Star Resort complex.

This McDonald’s remodel was announced back in October 2019, and promises to bring a “redesigned, more elevated experience” (for a McDonald’s, anyway) upon reopening. Given its current progress, we expect it to reopen by the end of summer at the latest (if not before the parks.)

Next
TODAY on WDWNT LIVE: Join Us On a Quest! – “Onward” Disney+ Watch Along, Plus The Debut of “Pressing Issues” Tonight!