With Disney Parks around the world closed for the foreseeable future, WDWNT is dipping into our archives of vintage parks materials for a look back into parks history! Today, we’re taking a look back at “the future that never was” at the Magic Kingdom with a 1995 New Tomorrowland press kit! 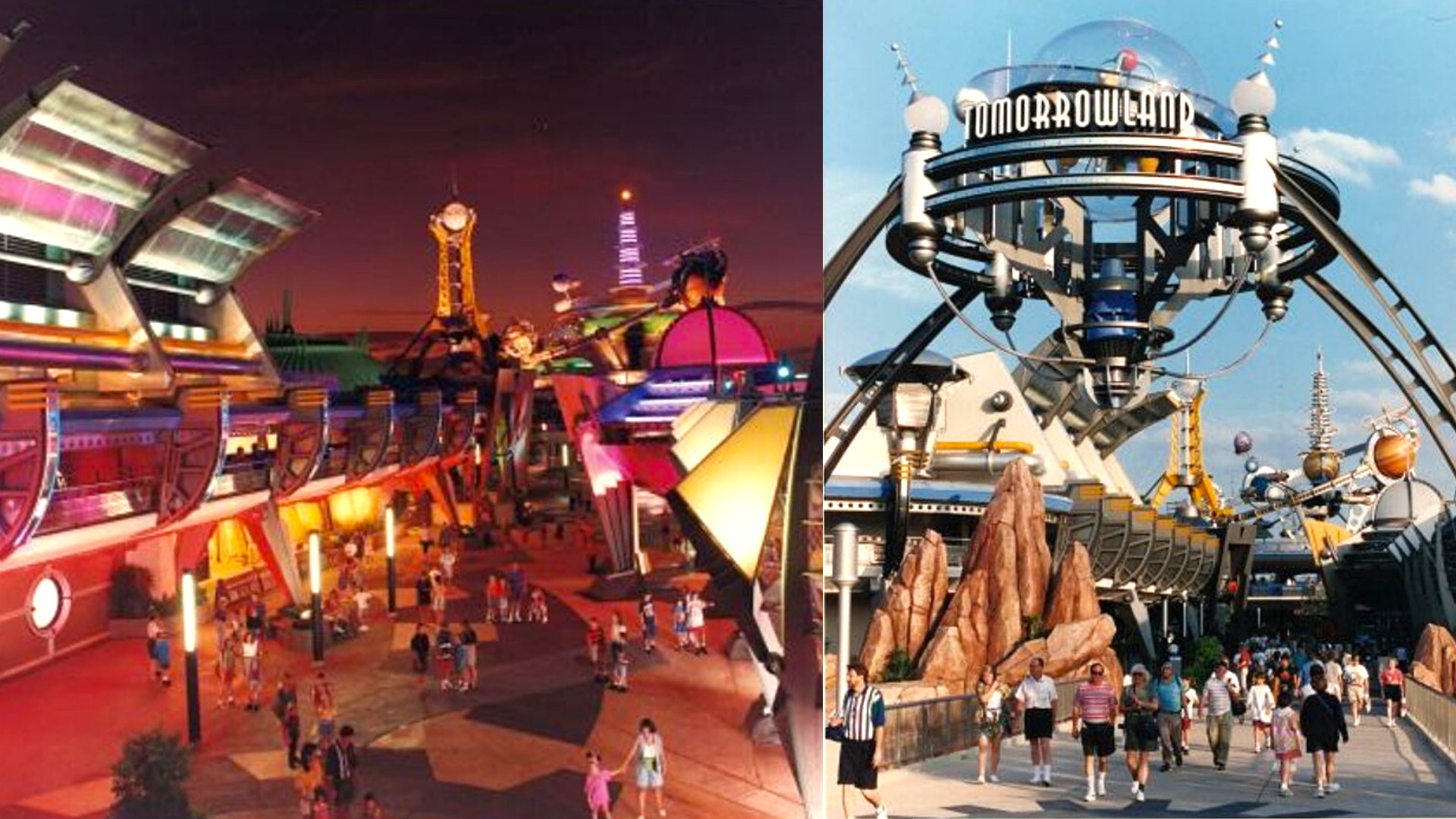 Note: This article will detail the press kit by page, but WIGS Members will have access to download a full-resolution PDF of the entire kit. Head on over to Patreon.com/wdwnt to join WIGS, the WDWNT Inner Globe Society, for as little as $2 a month and unlock access to great content like this, and much more! 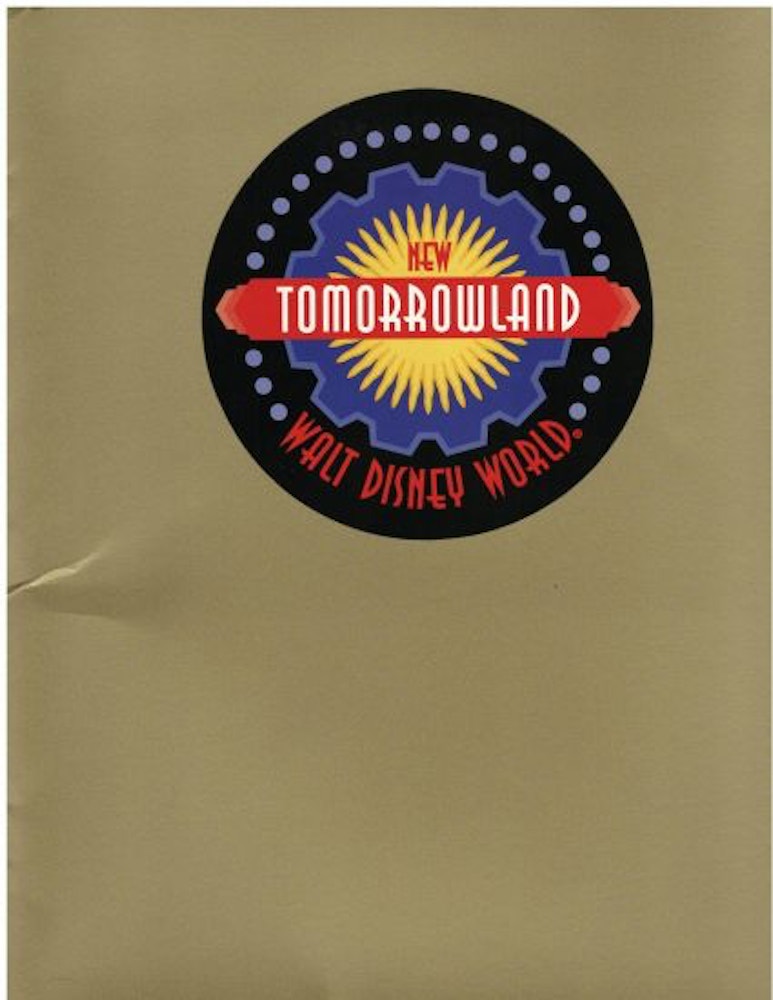 One of the coolest things about this kit is the fact that they created a special letterhead for the project, with a logo for The ExtraTERRORestrial Alien Encounter as the center of attention. 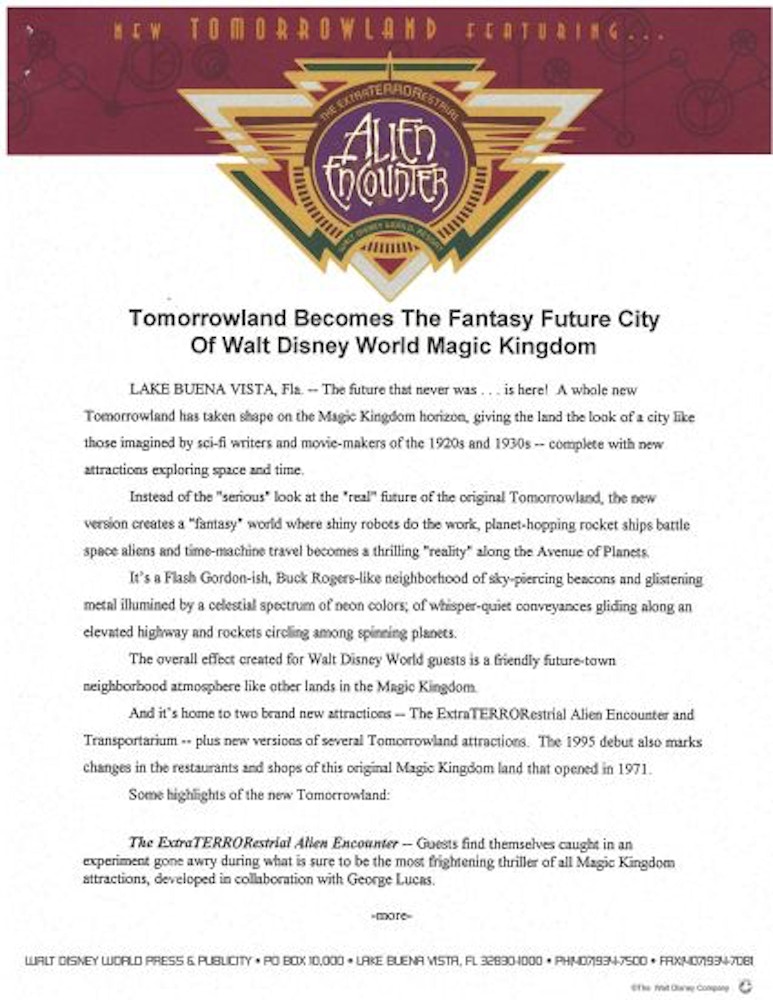 Another major highlight of the kit for this “Flash Gordon-ish, Buck Rogers-like neighborhood” is the use of the original name of the The Timekeeper, Transportarium. 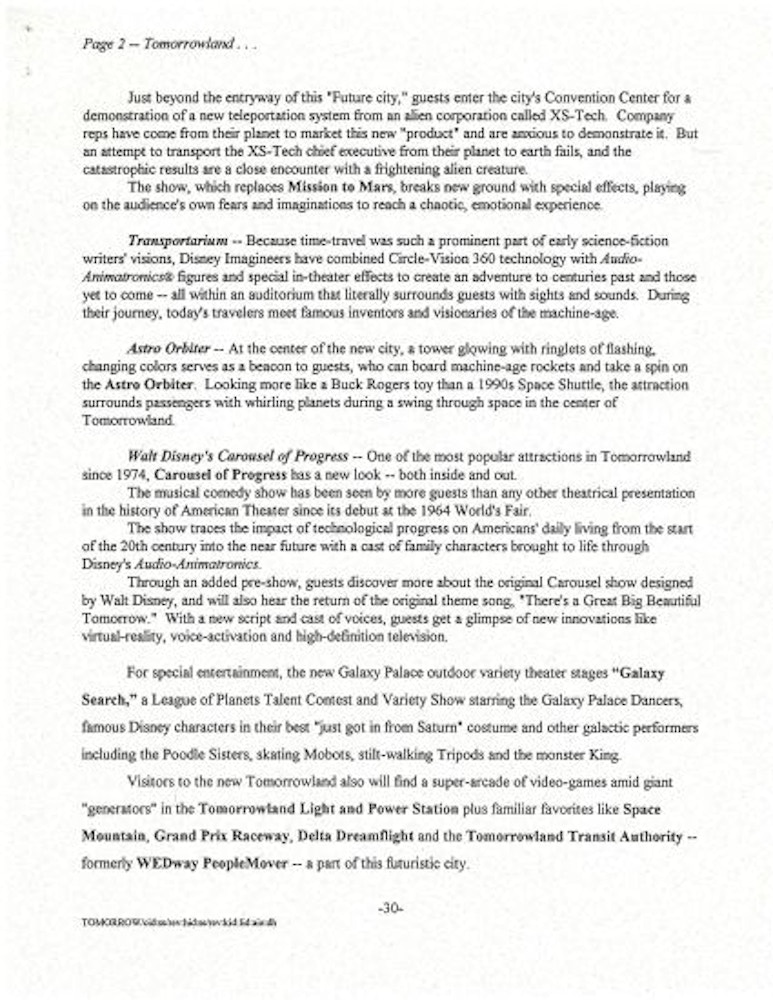 Does anyone remember “Galaxy Search?” With acts like “the Poodle Sisters, skating Mobots, stilt-walking Tripods and the monster King,” this seems like a wonderfully weird show! 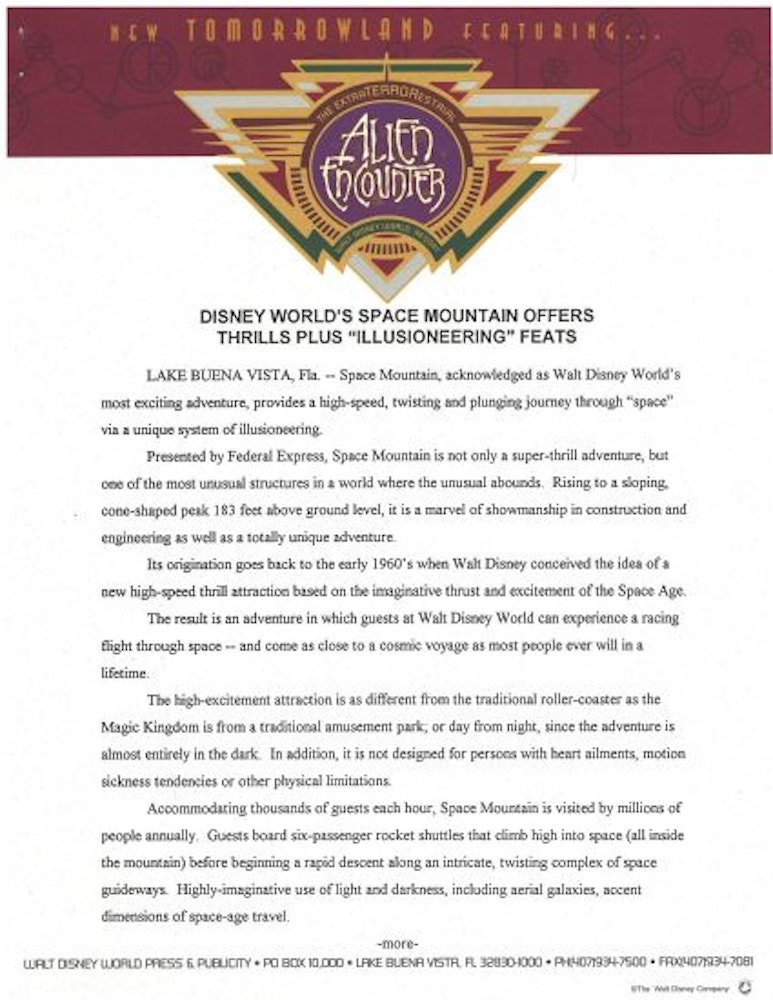 Another release offers facts and statistics all about that Tomorrowland staple, Space Mountain. 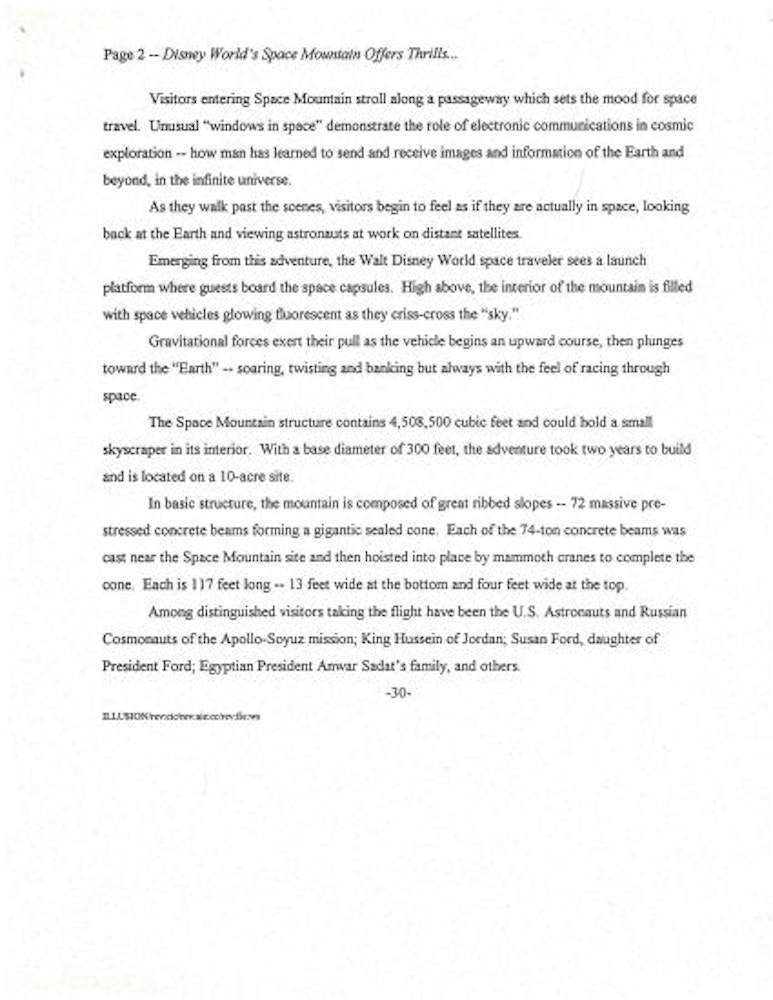 (Please don’t try to fit a small skyscraper inside Space Mountain. Then there’d be no room for the roller coaster.) 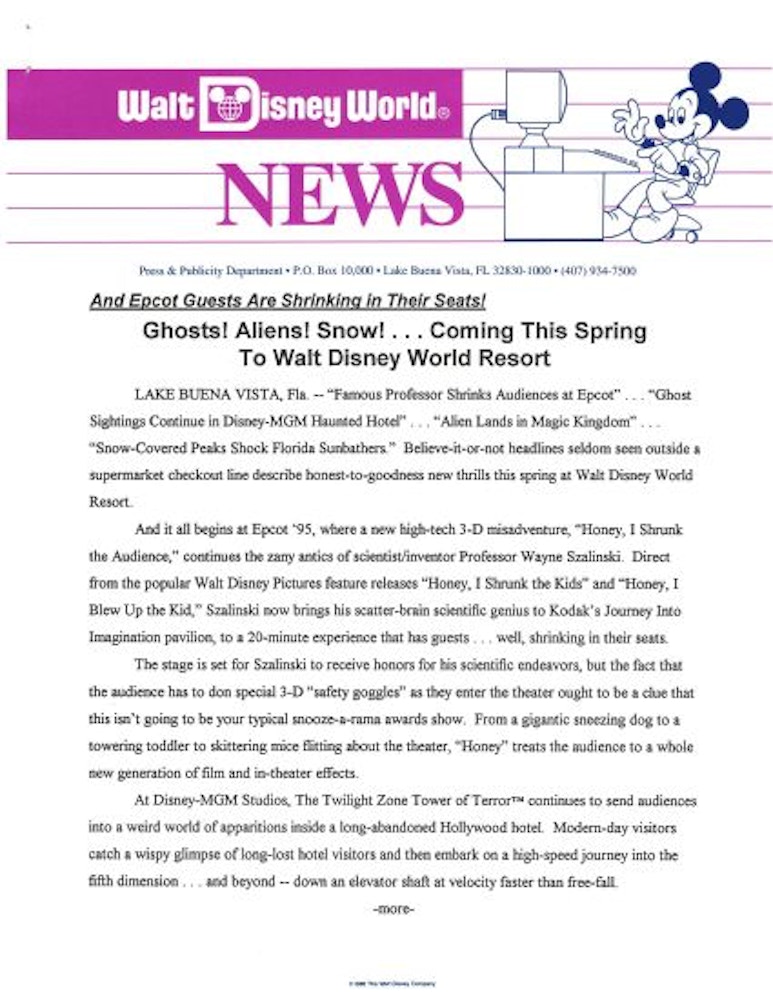 Of course, it’s not all about New Tomorrowland. One of the press releases discusses the new additions and big changes at Walt Disney World in 1994 and 1995. The Twilight Zone Tower of Terror and Honey, I Shrunk the Audience get their due as well! 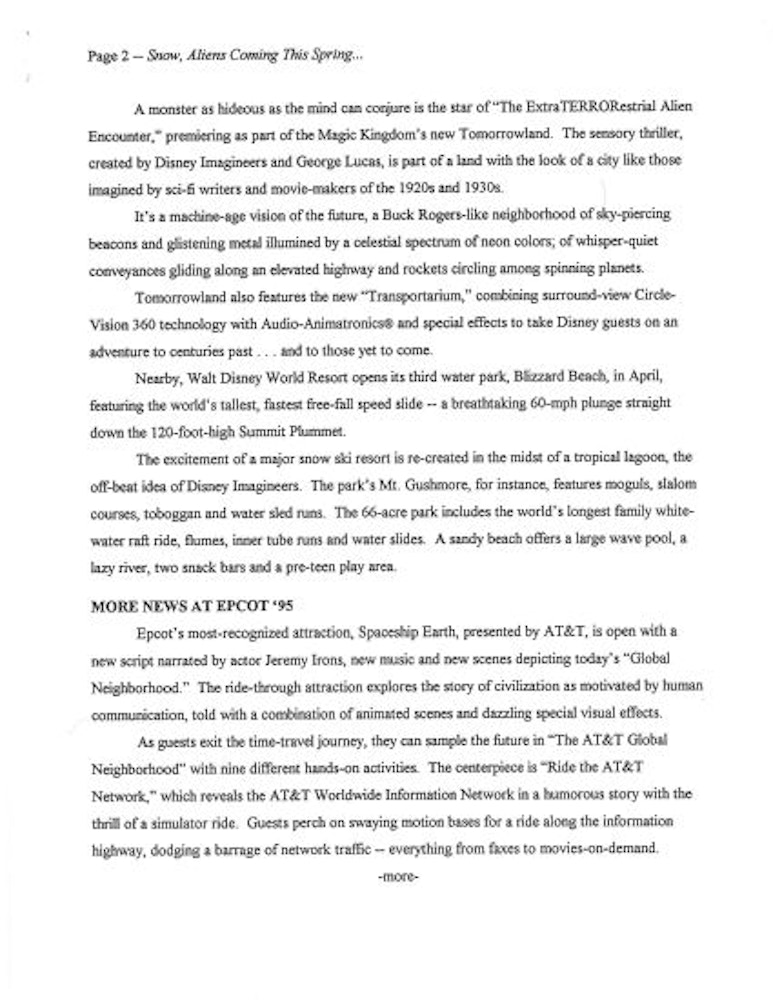 Ever heard of this newfangled water park called “Blizzard Beach?” I wondered whatever happened to it… But all kidding aside, who remembers enjoying The AT&T Global Neighborhood after hearing Jeremy Irons narrate Spaceship Earth? That brings back some fond memories. (I remember going on “Ride the AT&T Global Network” only once… it was fun for a kid!) 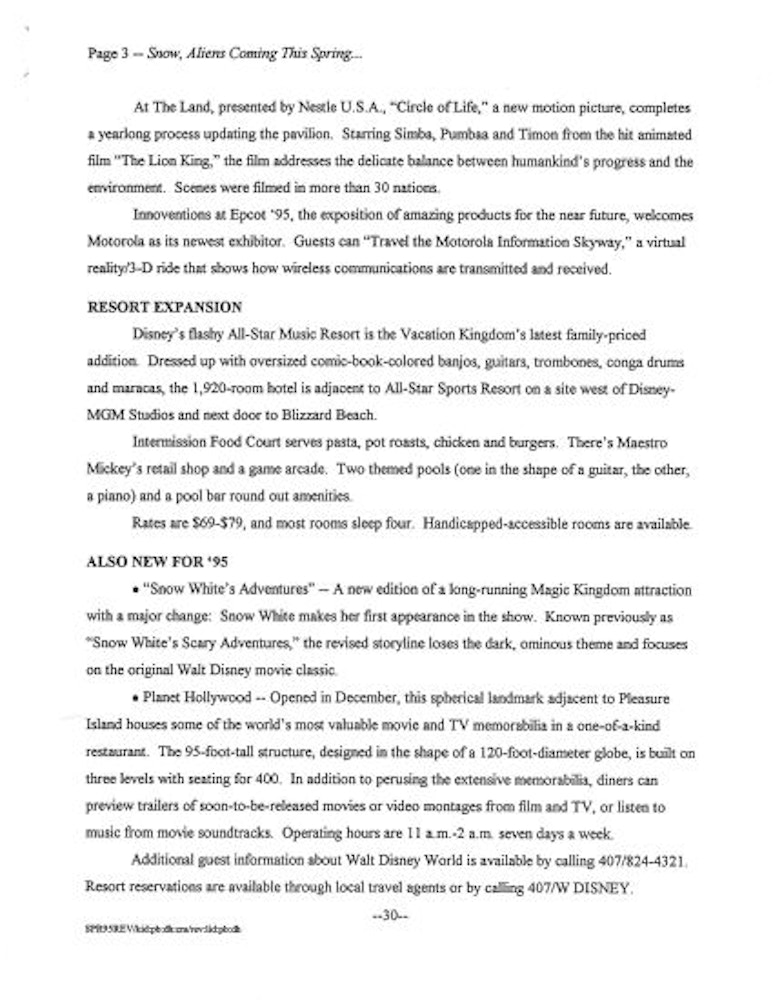 Also new in late 1994? Disney’s All-Star Music Resort, the second of the three-resort complex to open. (Disney’s All-Star Sports Resort had opened earlier that same year.) It’s also the year Planet Hollywood made its Walt Disney World debut, and it’s been there ever since. In 1995, Snow White actually joined the cast of Snow White’s Adventures in Fantasyland. 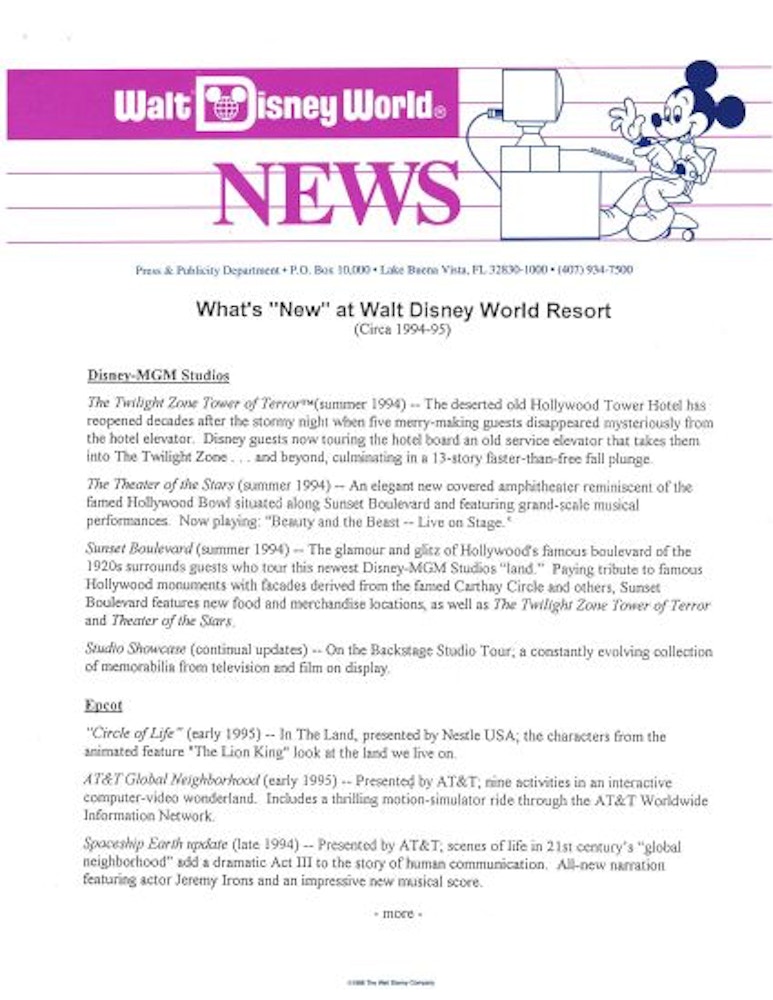 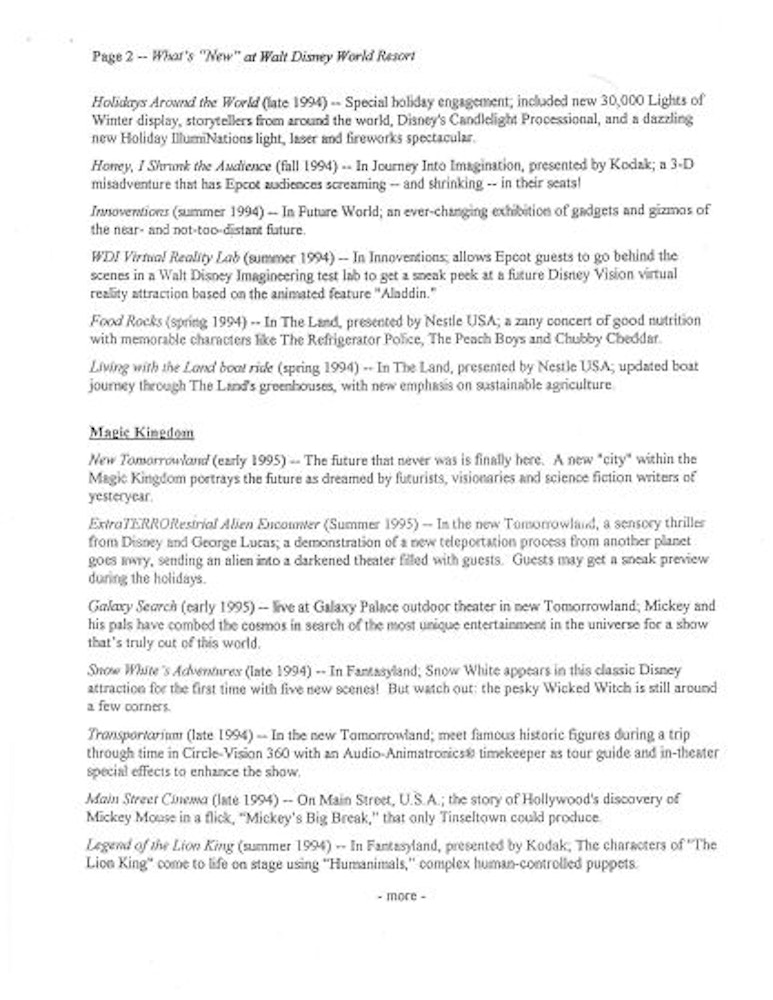 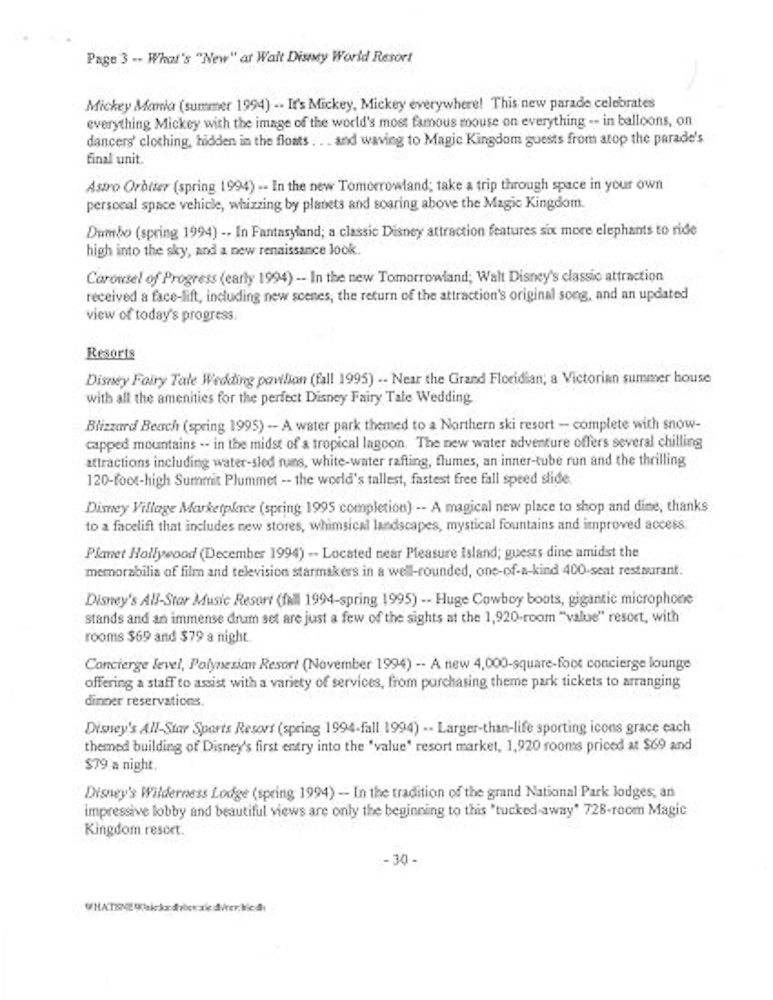 A point of note is that this release still utilizes the name Disney Village Marketplace. This was before there was even a Downtown Disney! 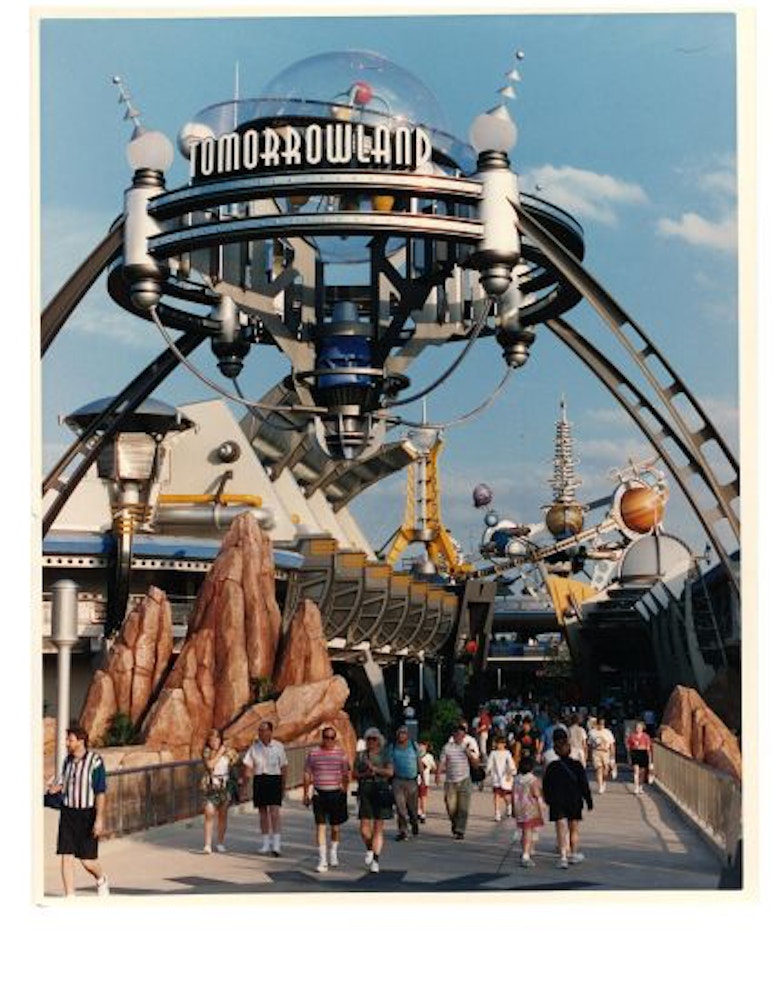 And what’s a good press kit without pictures? 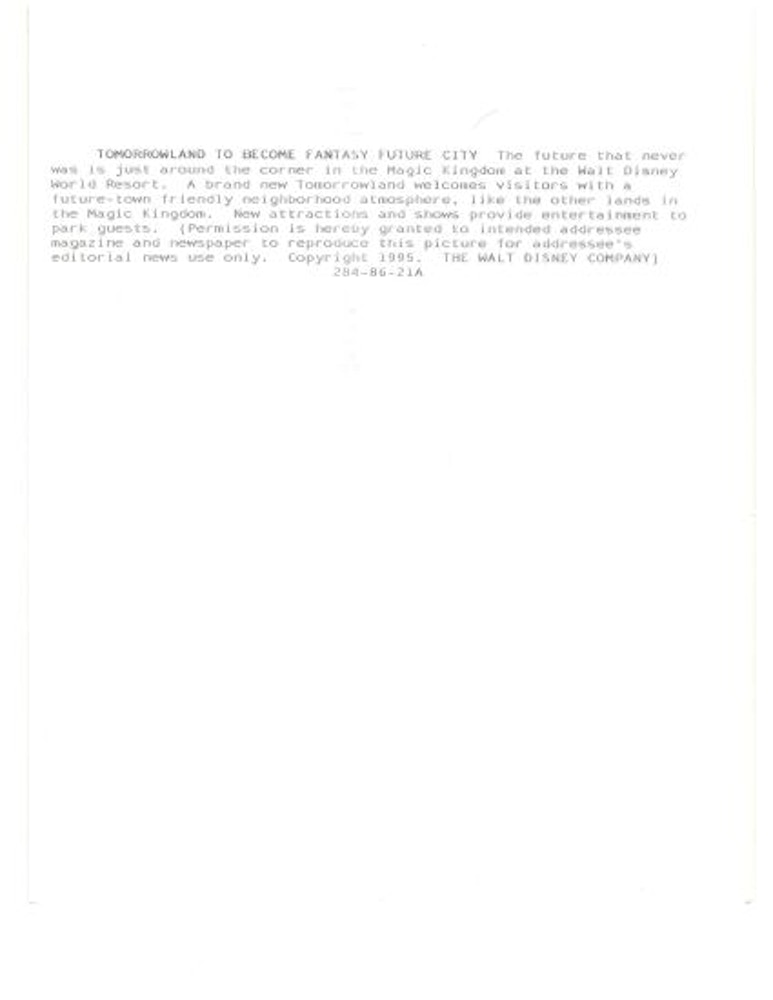 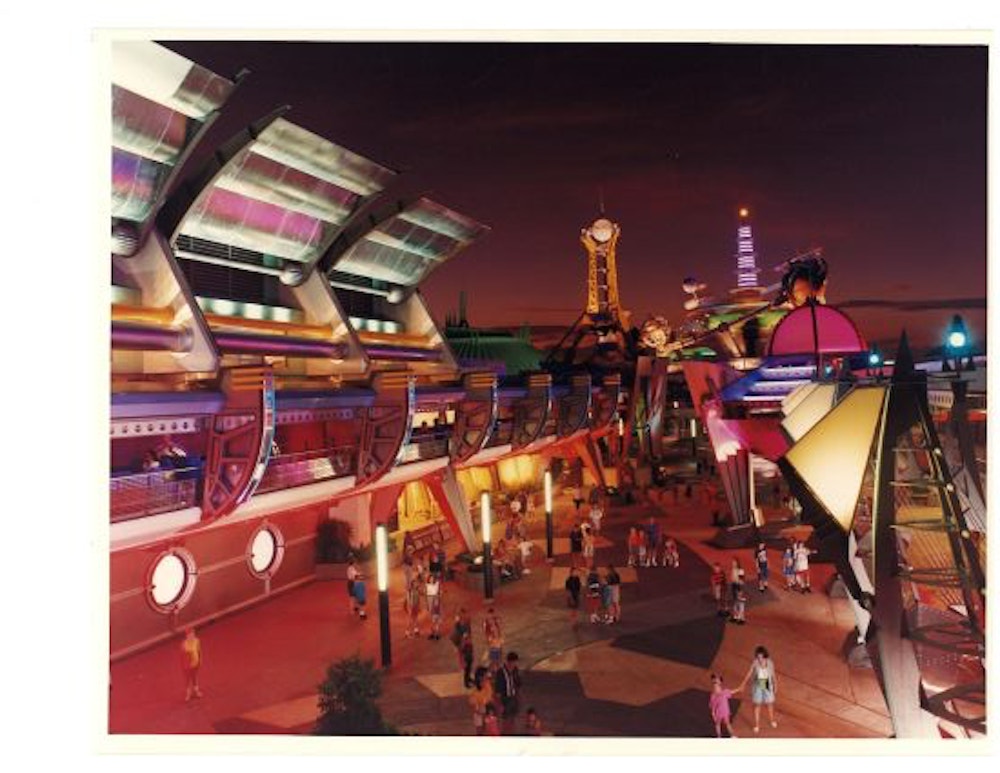 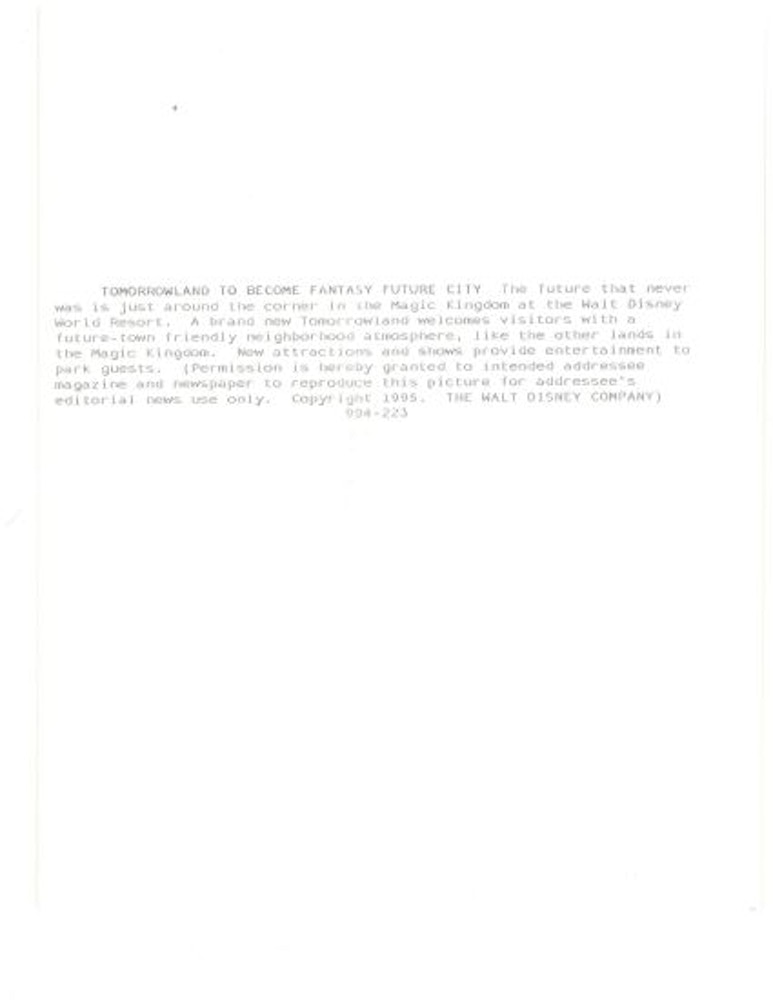 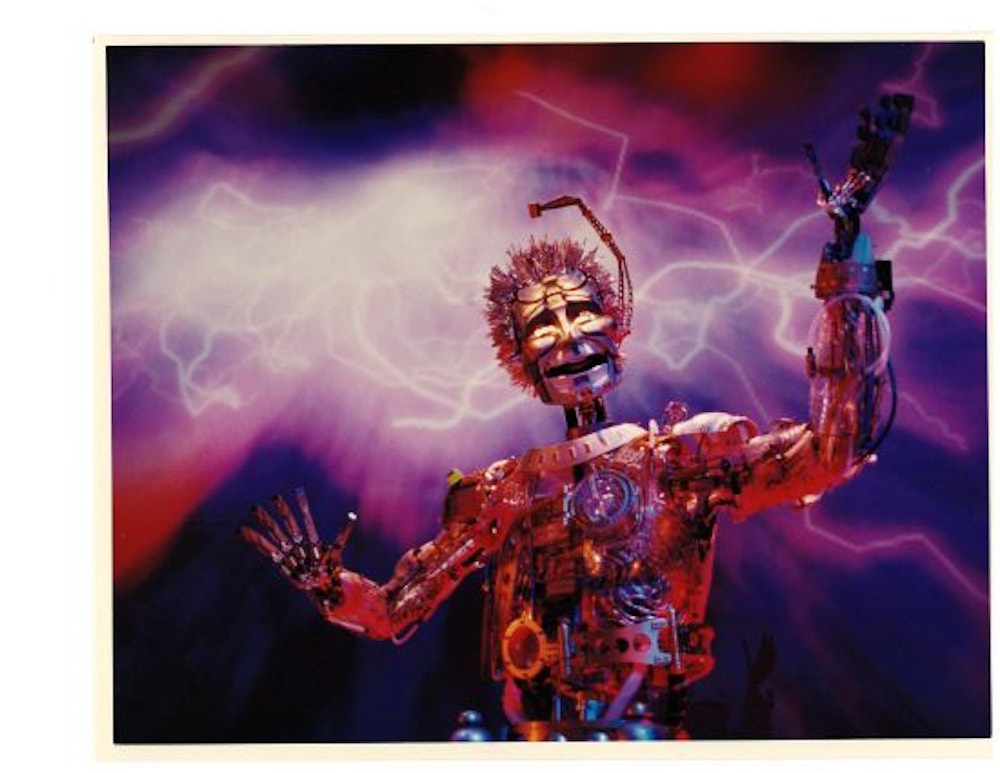 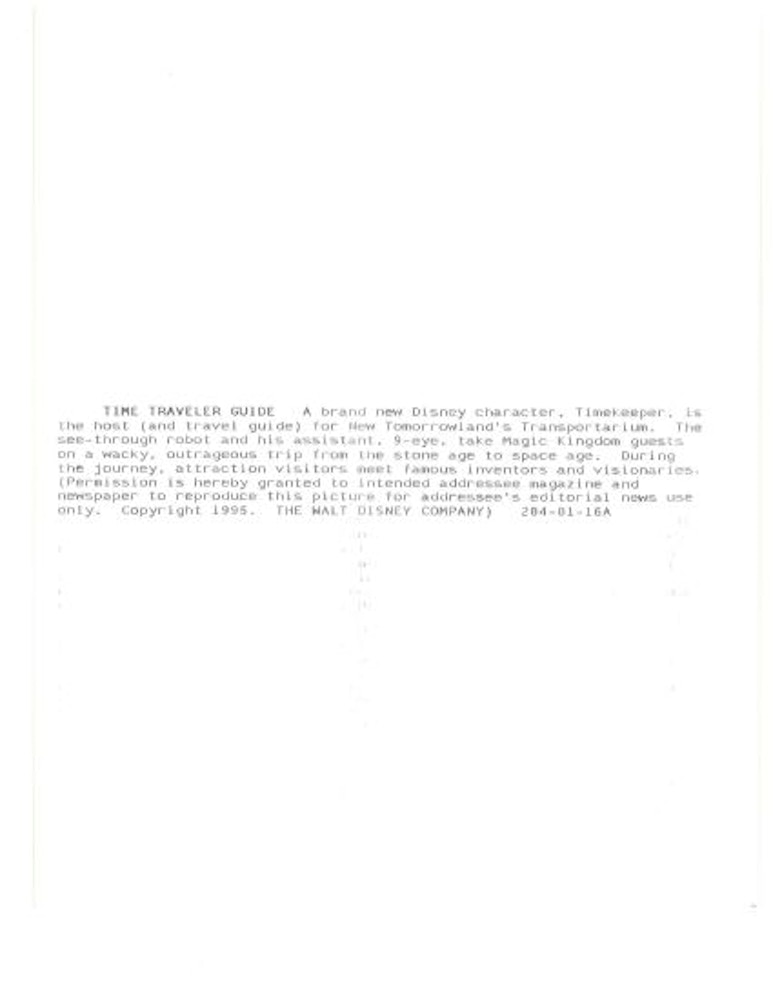 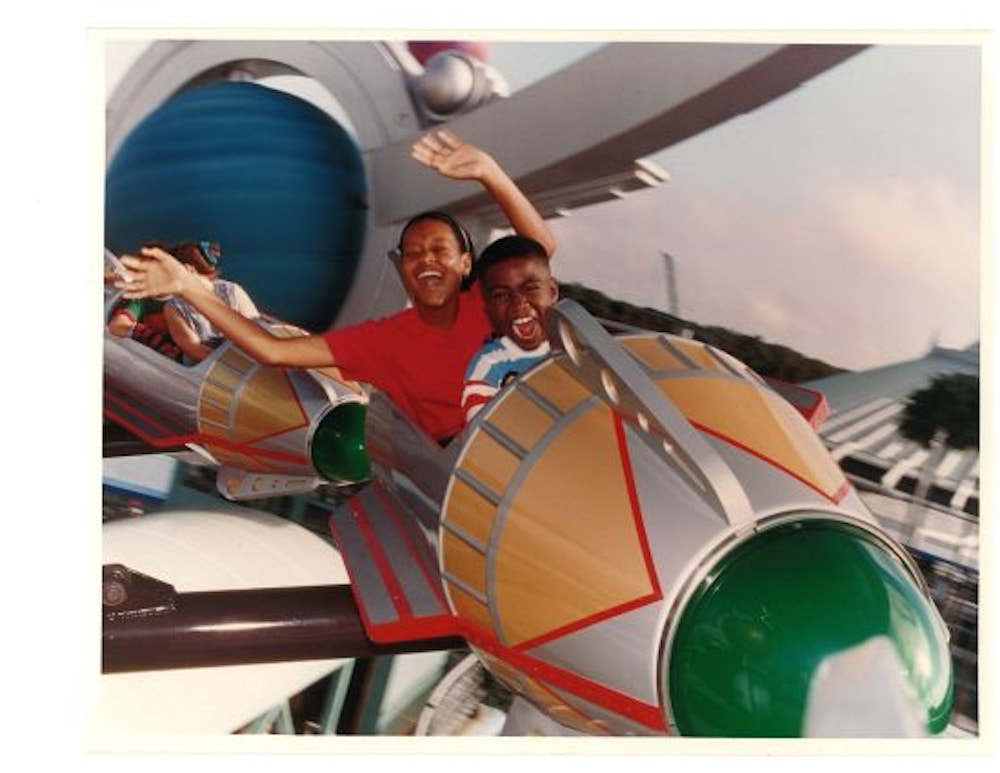 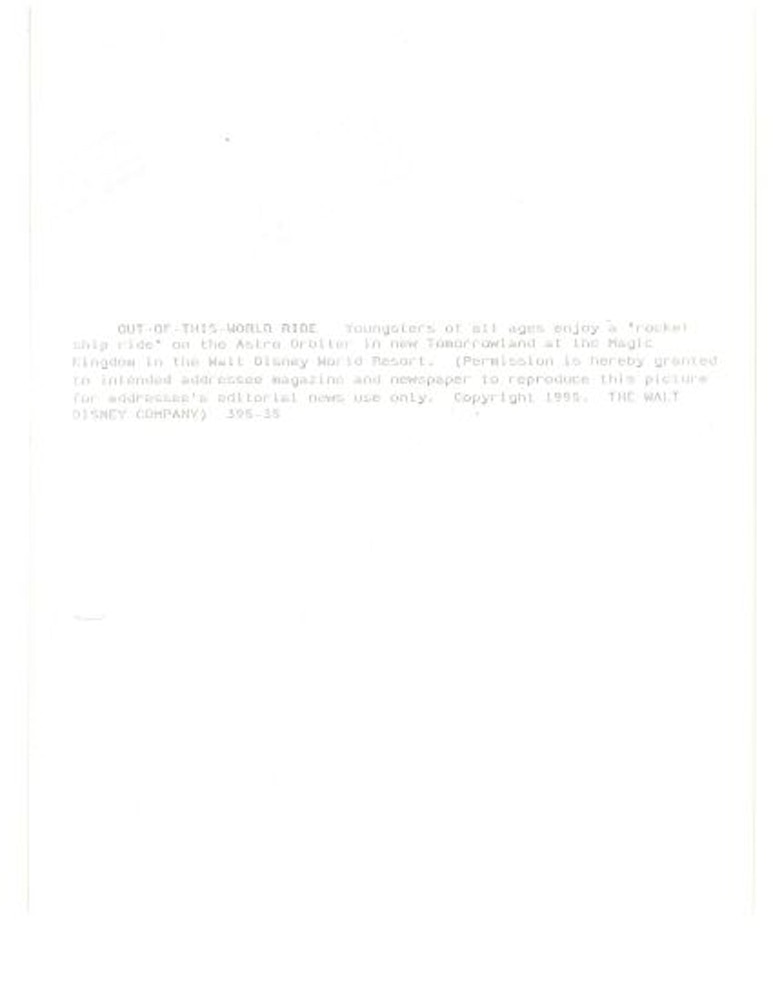 This kit really takes me back… to the future! (Of course, you’d have to go to Universal Studios Florida for that.)

Next
PHOTOS, VIDEO: Lucasfilm Peers Into its Archives to Show Off Props from “Star Wars: The Rise of Skywalker”