With Disney Parks around the world closed for the foreseeable future, WDWNT is dipping into our archives of vintage parks materials for a look back into parks history! And in celebration of Hollywood Studios Appreciation Week, all this week, we’re peeking into the studio vault with items from the early years of the Disney-MGM Studios! Today, we’re looking a park coming soon to a resort (maybe) near you with this Disney-MGM Studios Special “Sneak Preview” Guide! 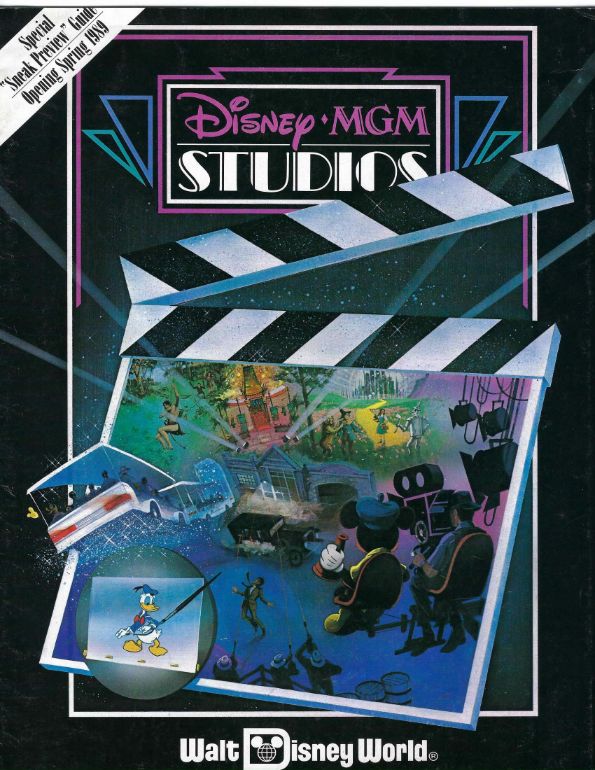 This is a really beautiful piece of art on the front cover, with references to three of the park’s opening day attractions: The Great Movie Ride, the Backstage Studio Tour, and The Magic of Disney Animation. (I don’t know how I feel about Mickey Mouse directing a scene where a gangster is gunned down, though. But then again, it is movie magic.) 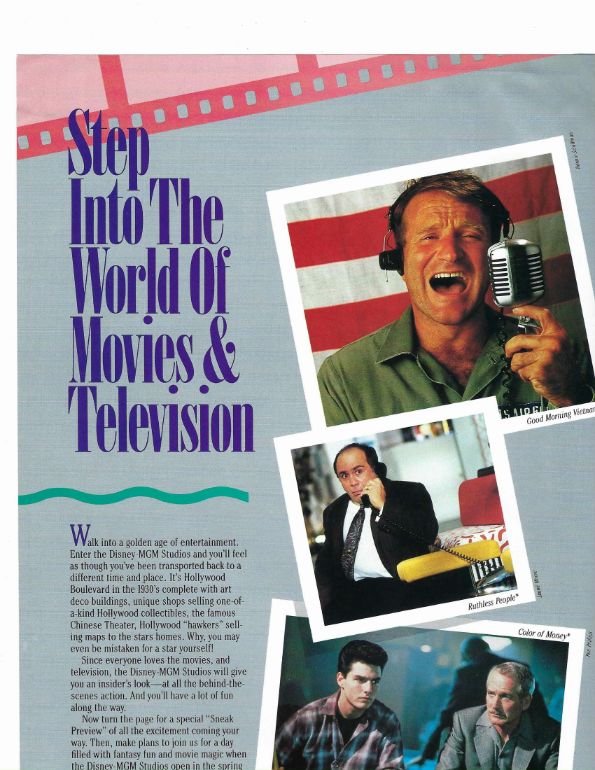 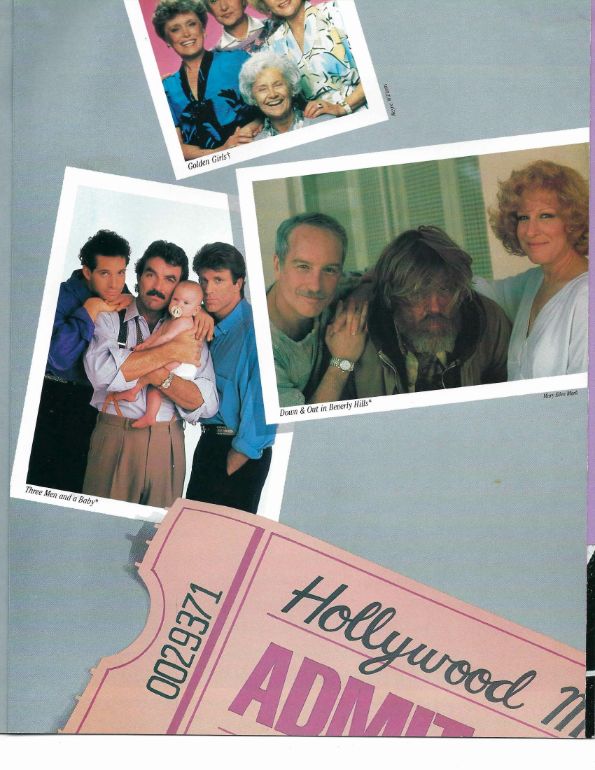 In the introduction, Disney tries to use its clout as a successful movie studios by touting its recent successes from Touchstone Pictures, including Good Morning, Vietnam, Ruthless People, The Color of Money, Down and Out in Beverly Hills, and Three Men and a Baby, along with “The Golden Girls,” one of Disney’s most successful television shows at the time. 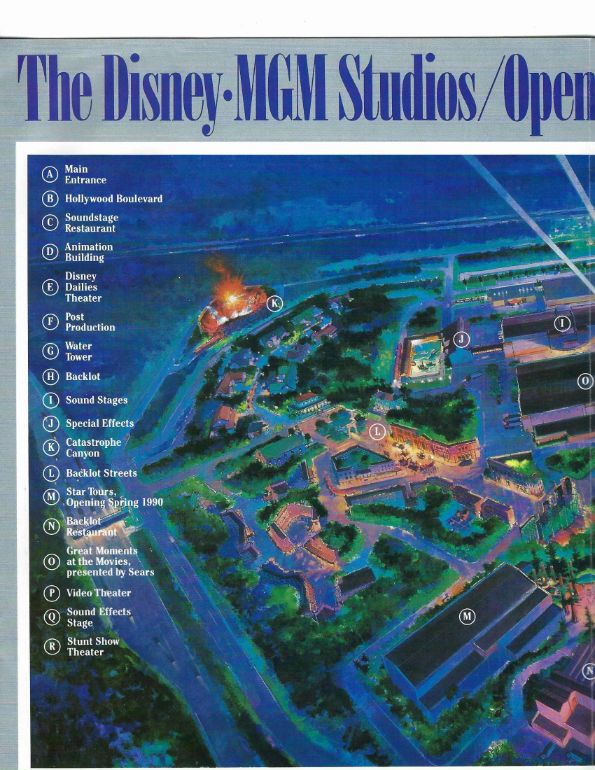 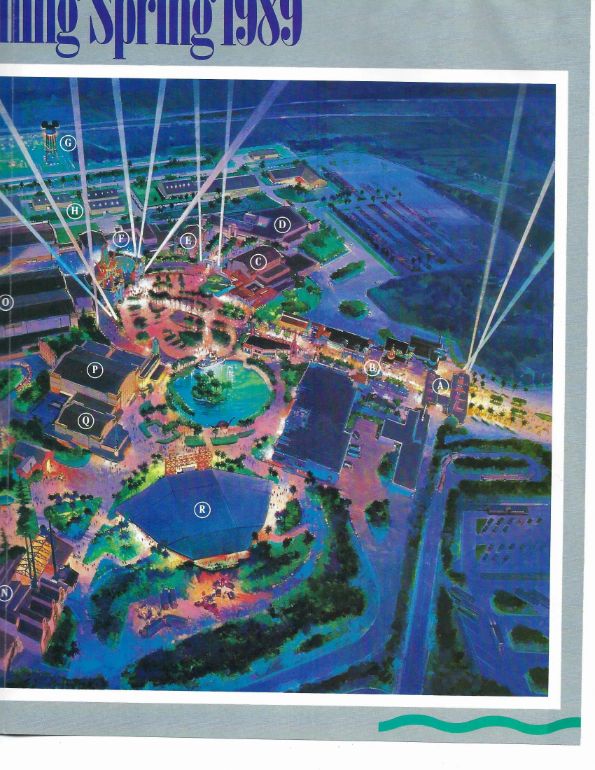 Next is concept art of the park turned into a map. Most noticeably, in the map, The Great Movie Ride is named “Great Moments at the Movies,” and is sponsored by Sears rather than Coca-Cola. Also listed is the Disney Dailies Theater, which didn’t come to full fruition due to the legal hurdles of showing footage from productions being shot that day to park guests. Instead, we got The Walt Disney Theater, which showed sneak previews of upcoming Disney films. Meanwhile, the Stunt Show Theater is listed, but nowhere in the guide is Indiana Jones even mentioned. 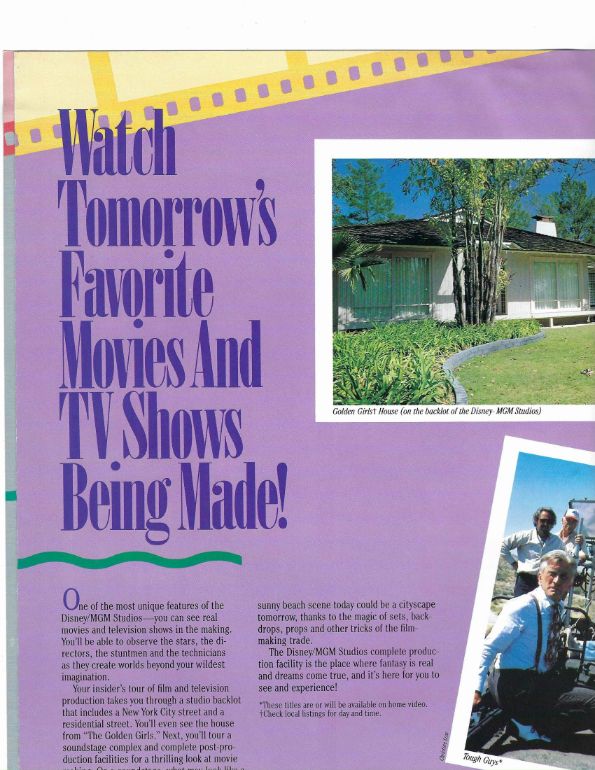 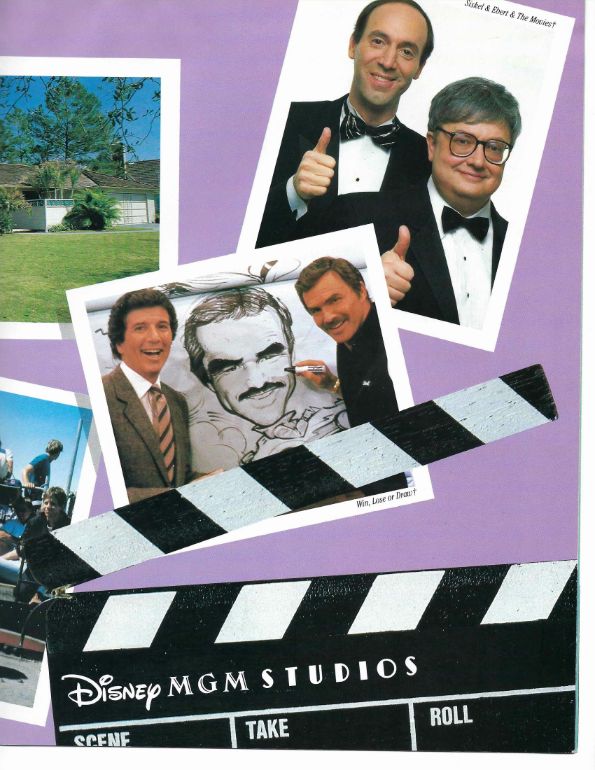 Without pictures of the Backstage Studio Tour to promote the fact that in addition to being a theme park, the Disney-MGM Studios was also a working film and television studio, more behind-the-scenes and promotional images from other Disney productions are used, including Tough Guys, “Siskel & Ebert & the Movies,” and “Win, Lose or Draw.” 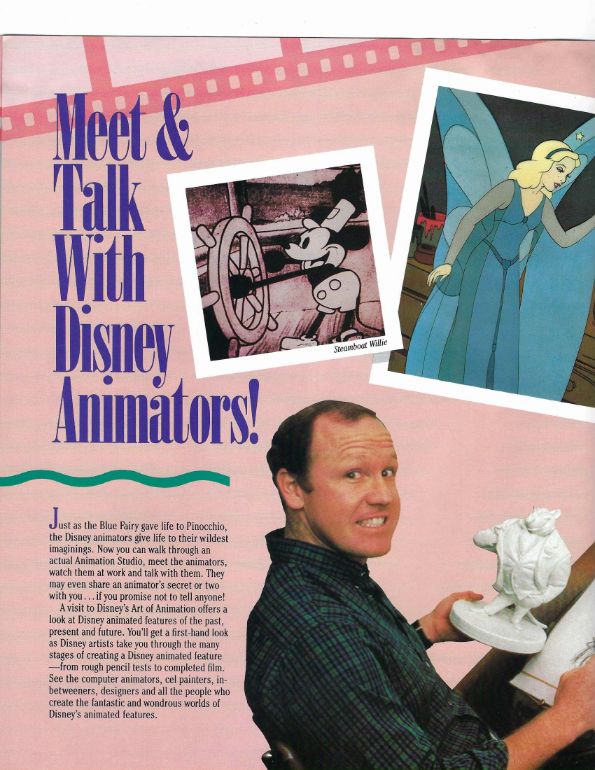 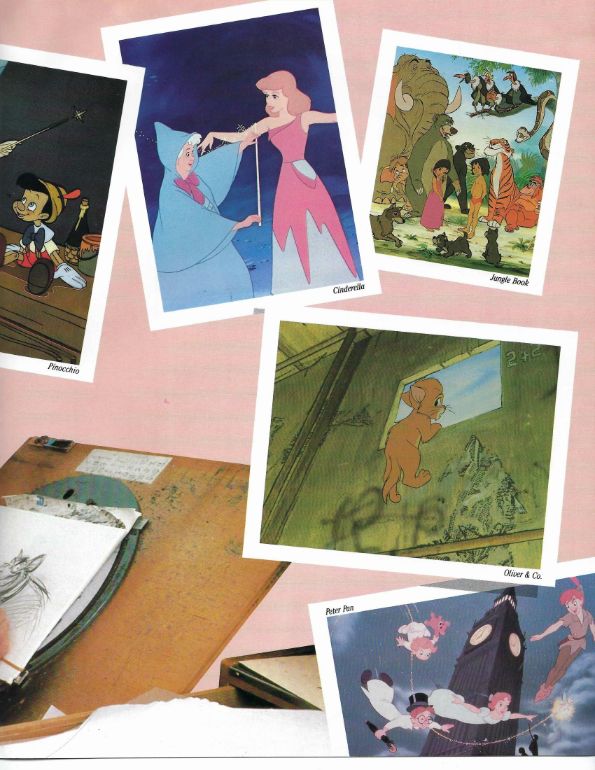 Future Disney Legend Glen Keane greets us on the section for The Magic of Disney Animation, here referred to Disney’s Art of Animation (over two decades before that name would grace a resort). Let’s read what they have to say:

“Just as the Blue Fairy gave life to Pinocchio, the Disney animators give life to their wildest imaginings. Now you can walk through an actual Animation Studio, meet the animators, watch them at work and talk with them. They may even share an animator’s secret or two with you… if you promise not to tell anyone!

A visit to Disney’s Art of Animation offers a look at Disney animated features of the past, present and future. You’ll get a first-hand look as Disney artists take you through the many stages of creating a Disney animated feature – from rough pencil tests to completed film. See the computer animators, cel painters, in-betweeners, designers and all the people who create the fantastic and wondrous worlds of Disney’s animated features.” 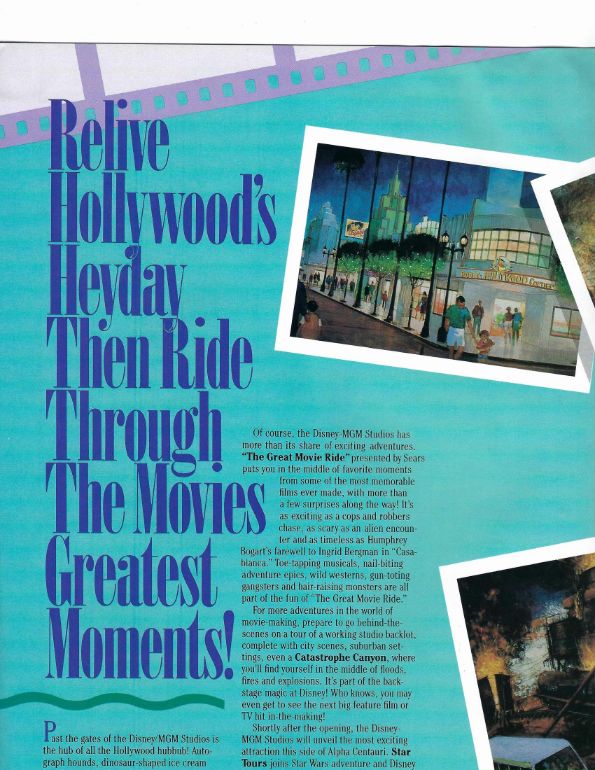 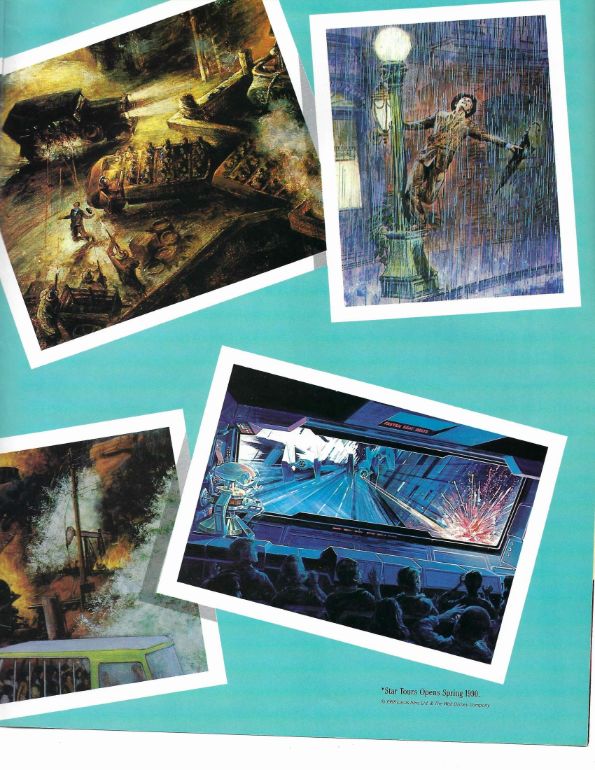 Moving on to the park’s other attractions, we get a preview of The Great Movie Ride (here referred to by the correct name), the Backstage Studio Tour’s Catastrophe Canyon, and Star Tours, complimented by great concept art. 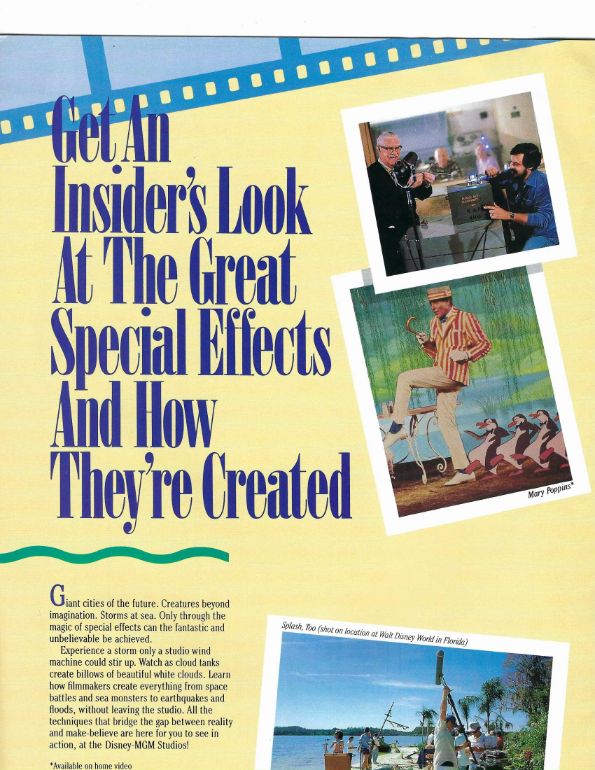 That’s followed by a look at the special effects demonstrations guests would see at the park:

“Giant cities of the future. Creatures beyond imagination. Storms at sea. Only though the magic of special effects can the fantastic and unbelievable be achieved.

Experience a storm only a studio wind machine could stir up. Watch as cloud tanks create billows of beautiful white clouds. Learn how filmmakers create everything from space battles and sea monsters to earthquakes and floods, without leaving the studio. All the techniques that bridge the gap between reality and make-believe are here for you to see in action, at the Disney-MGM Studios!” 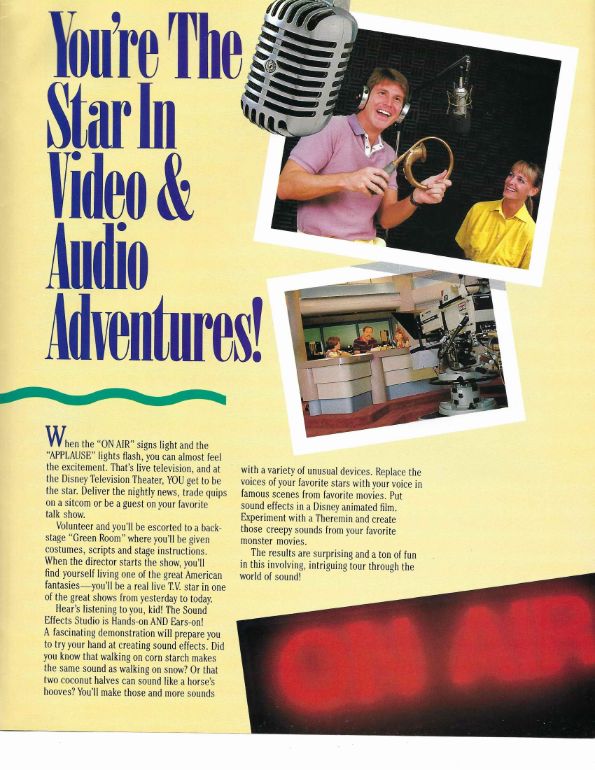 Finally, we preview the audience-participation shows Superstar Television and the Monster Sound Show, then known as the Disney Television Theater and the Sound Effects Studio. 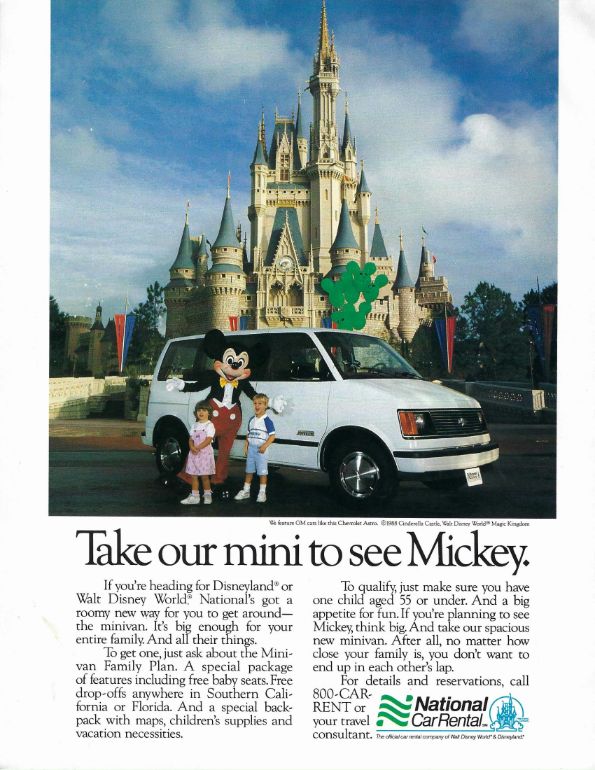 And with an advertisement for National Car Rental, the sneak preview comes to a close, having show readers the excitement and magic that was to come.

Previous
Phase 1 Opening of Florida Businesses Begins May 4th; Restaurants and Retail Reopening with Limited Capacity, Unclear If Any of Walt Disney World Can or Will