With Disney Parks around the world closed for the foreseeable future, WDWNT is dipping into our archives of vintage parks materials for a look back into parks history! Get ready to witness “The Dawn of a New Disney Era” with this commemorative pre-opening guide to EPCOT Center, featuring concept art, construction photos, and more!

Note: This article will detail the guide page by page, but WIGS Members will have access to download a full-resolution PDF of the entire booklet. Head on over to Patreon.com/wdwnt to join WIGS, the WDWNT Inner Globe Society, for as little as $2 a month and unlock access to great content like this, and much more! 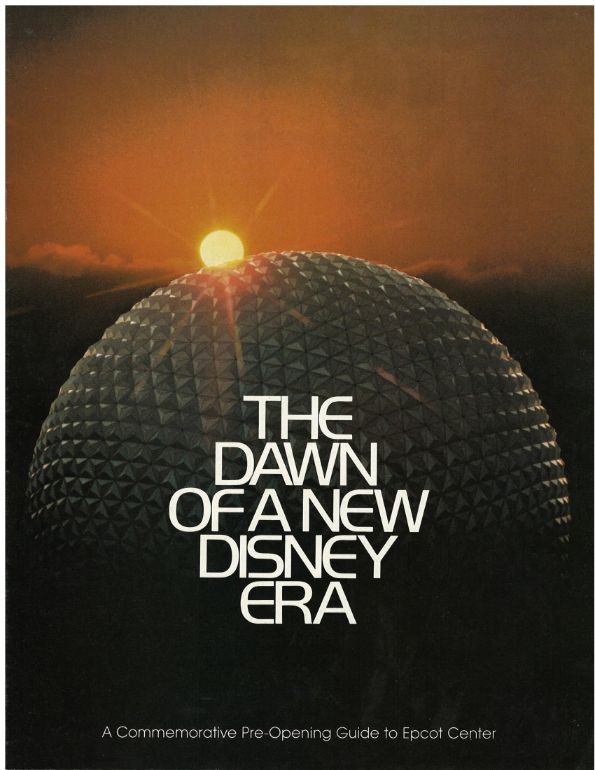 The cover features a dramatic sunrise over Spaceship Earth to drive home the whole “dawn” idea. 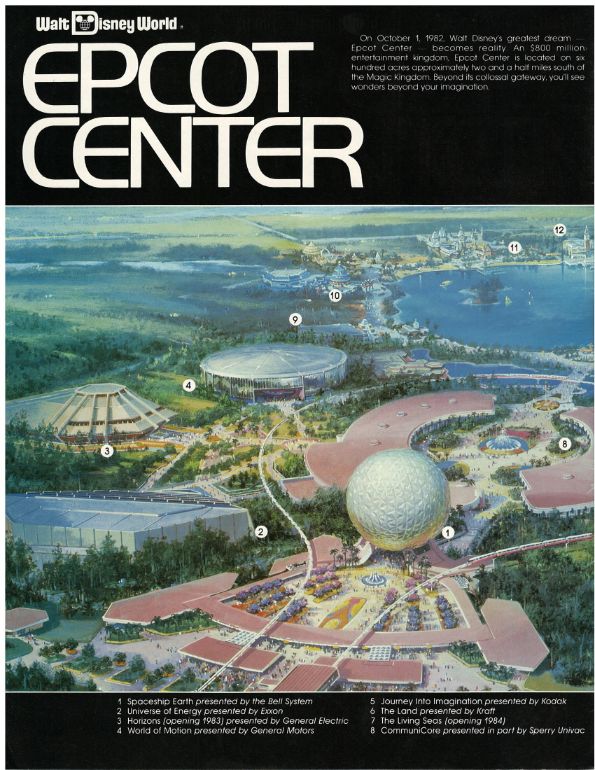 The guide opens with a map of what the park will eventually look like when Horizons and The Living Seas open (though the latter lists the original 1984 opening), and this introduction:

“On October 1, 1982, Walt Disney’s greatest dream – Epcot Center – becomes reality. An $800 million entertainment kingdom, Epcot Center is located on six hundred acres approximately two and a half miles south of the Magic Kingdom. Beyond its colossal gateway, you’ll see wonders beyond your imagination.

Within the realms of Epcot Center a family vacation will feature a series of adventures unparalleled in concept and form. Epcot Center represents the ultimate in Disney-‘Imagineered’ entertainment – an entertainment experience dedicated to humankind’s most precious resource: Imagination.

Epcot Center is a celebration of ingenuity and innovation. Inspired by the incredible vision of Walt Disney and fueled by creative energy, Epcot Center marks the dawn of a new era in Disney entertainment, bringing the art of the theme show to a new level of sophistication.

Twice the size of the Magic Kingdom, Epcot Center will encompass the two distinct dimensions: Future World and World Showcase, each unique in them and style. Together they will form a vast new showcase created to satisfy the imaginative appetites of the tens of millions of people of all ages from every corner of the globe destined to become ‘Epcot travelers.'” 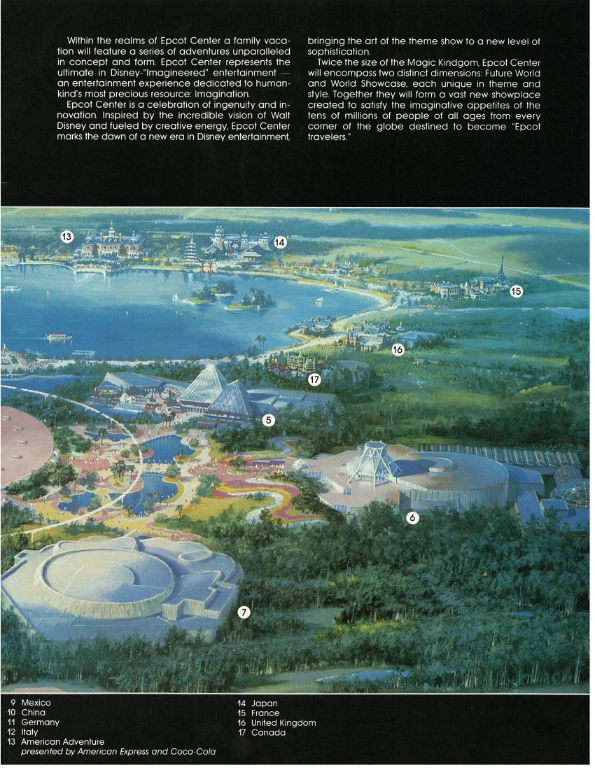 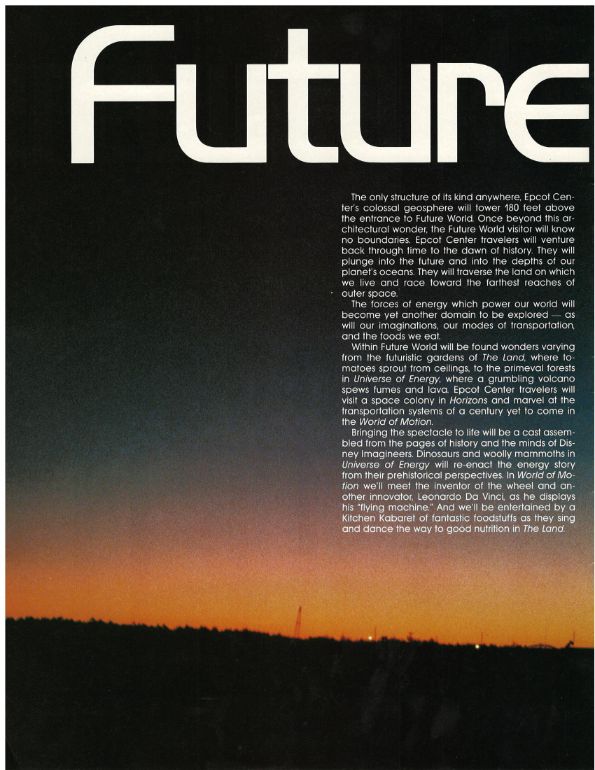 We then are introduced to Future World, featuring a silhouette of Spaceship Earth still under construction. Can you also make out The Land also being built? 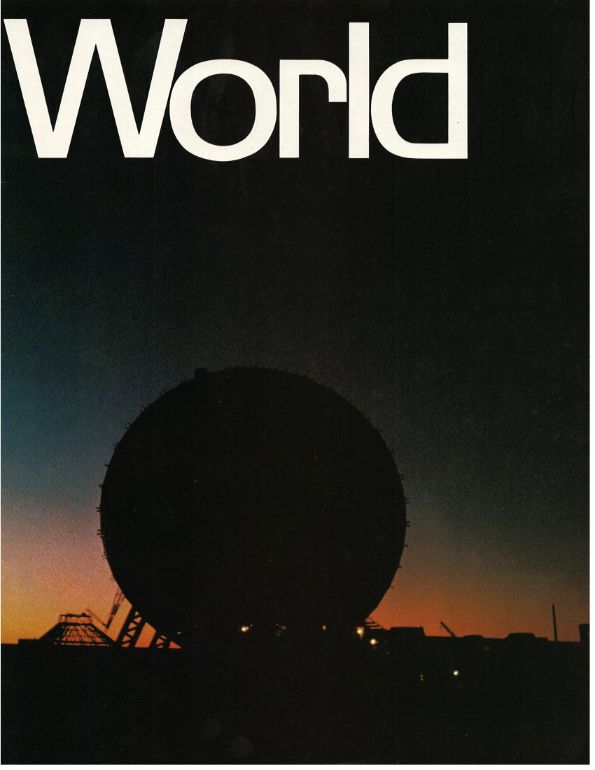 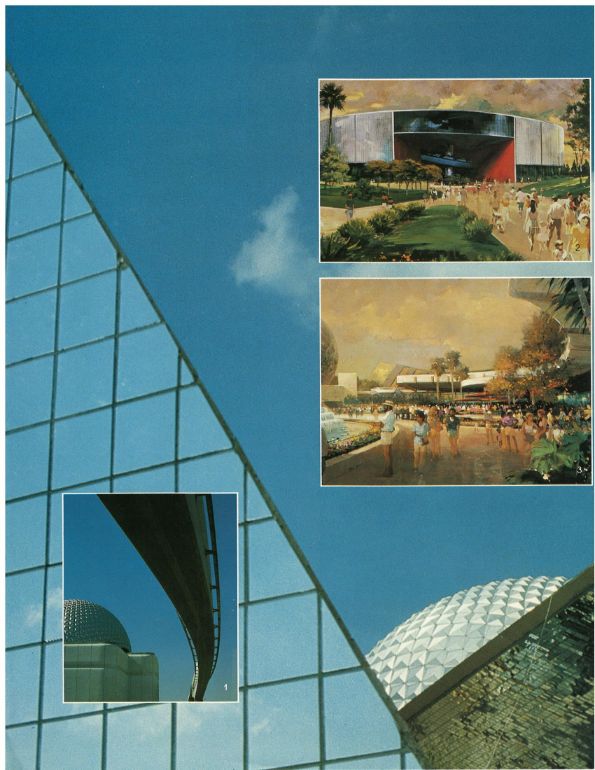 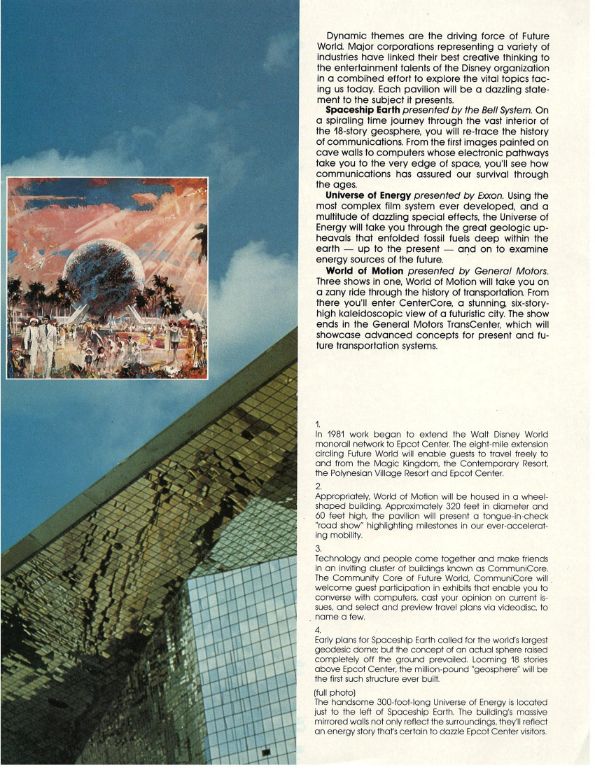 With the mirrored exterior of the Universe of Energy serving as a backdrop, we see concept art of some of the pavilions, including Spaceship Earth, CommuniCore, and World of Motion. 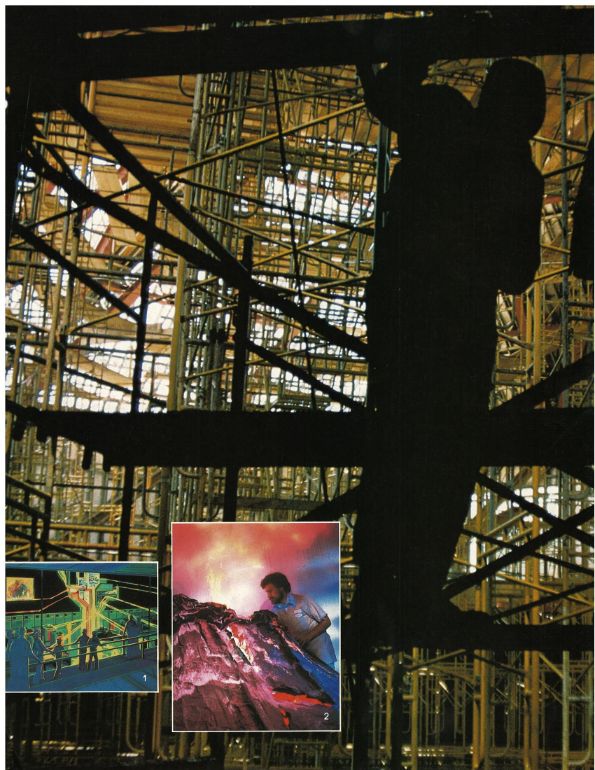 Next, we see The Land’s interior under construction, along with other EPCOT Center pavilions being worked on, like Universe of Energy and Journey into Imagination. 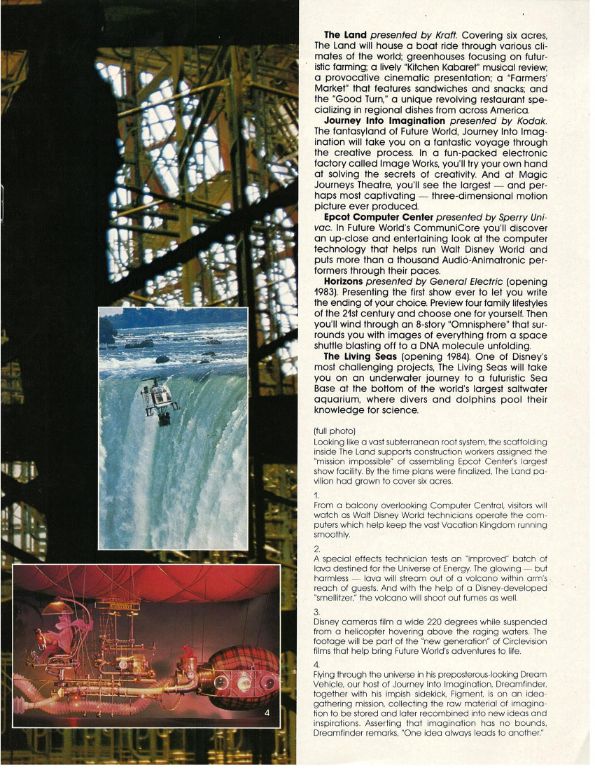 Moving on to World Showcase, we see the United Kingdom Pavilion on the rise. 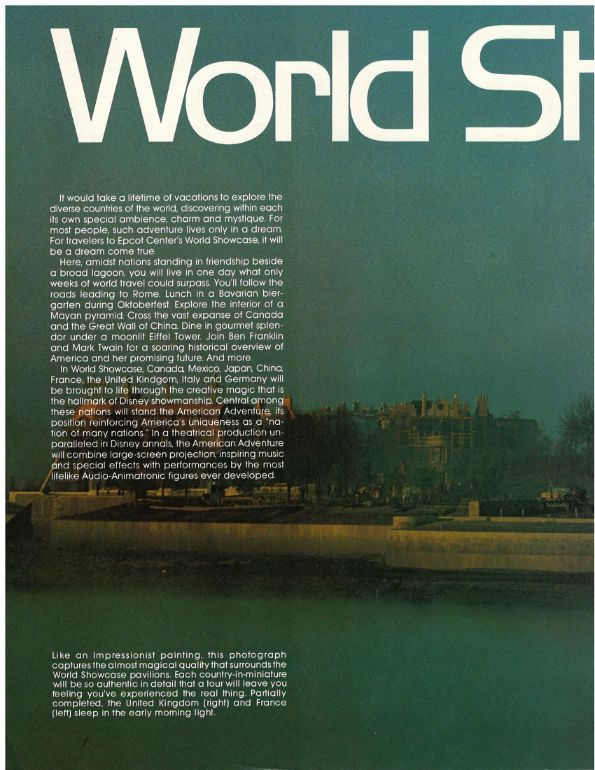 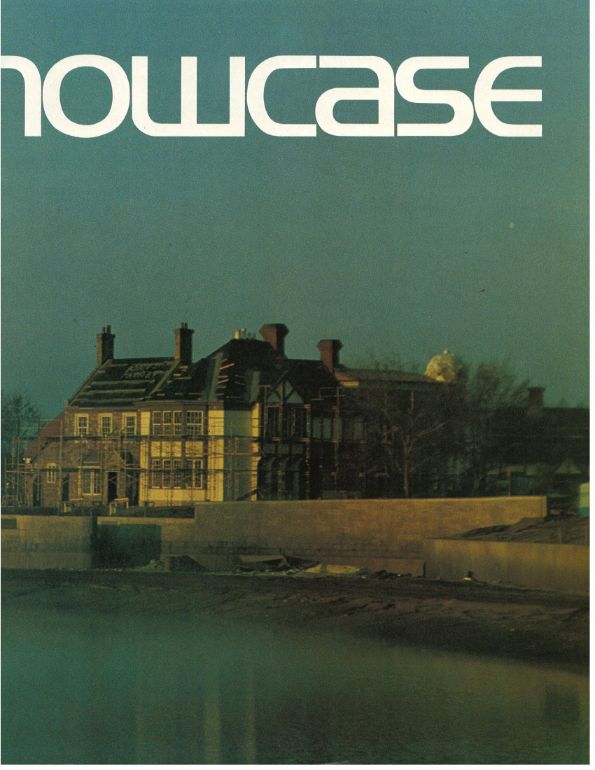 Can you identify the building being built below? It’s the China Pavilion’s Temple of Heaven! 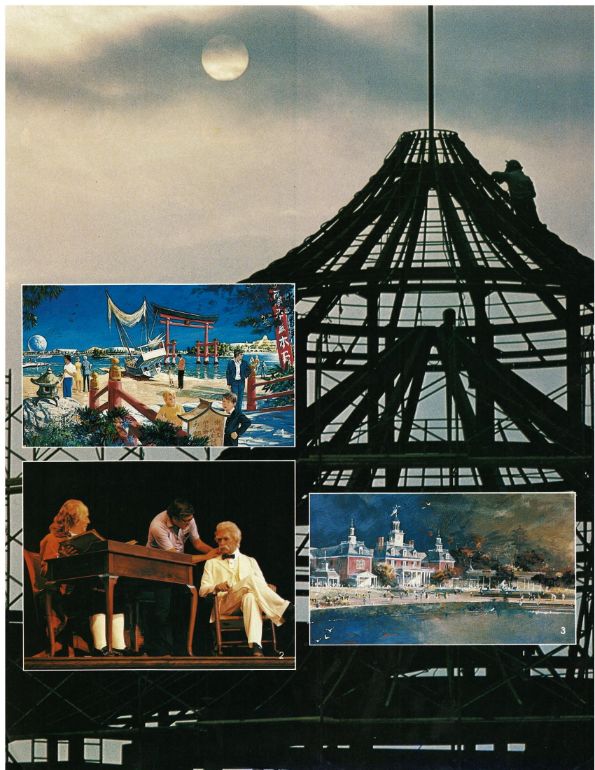 We also see concept art for The American Adventure (along with an Imagineer working on the Audio-Animatronics of Benjamin Franklin and Mark Twain), along with the Japan (above) and Germany (below) pavilions. 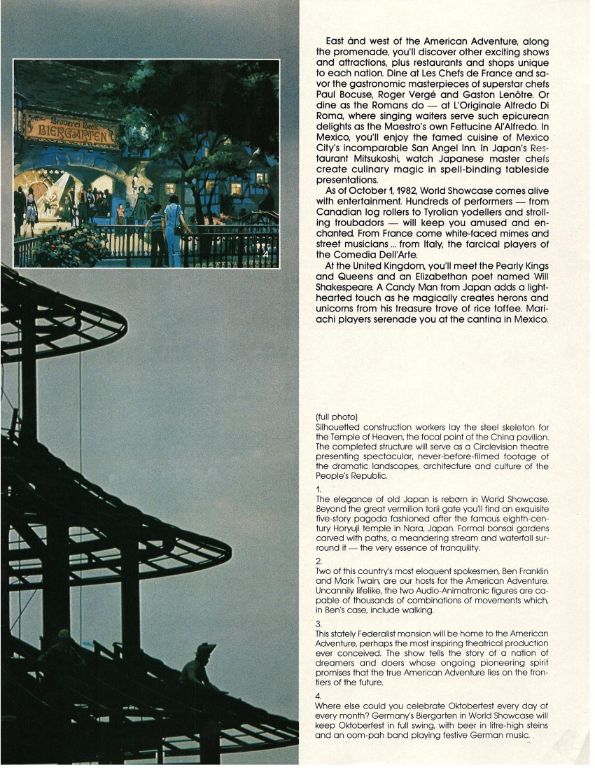 In front of the Italy Pavilion under construction, we close out the guide with concept art for the France, Mexico, and Canada pavilions. 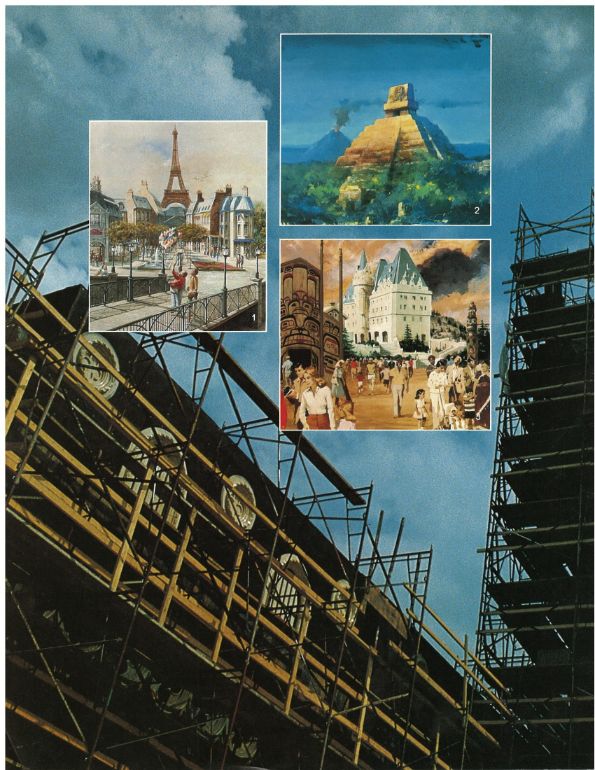 You can also see a close-up of one of the angel sculptures that call the Italy Pavilion home. 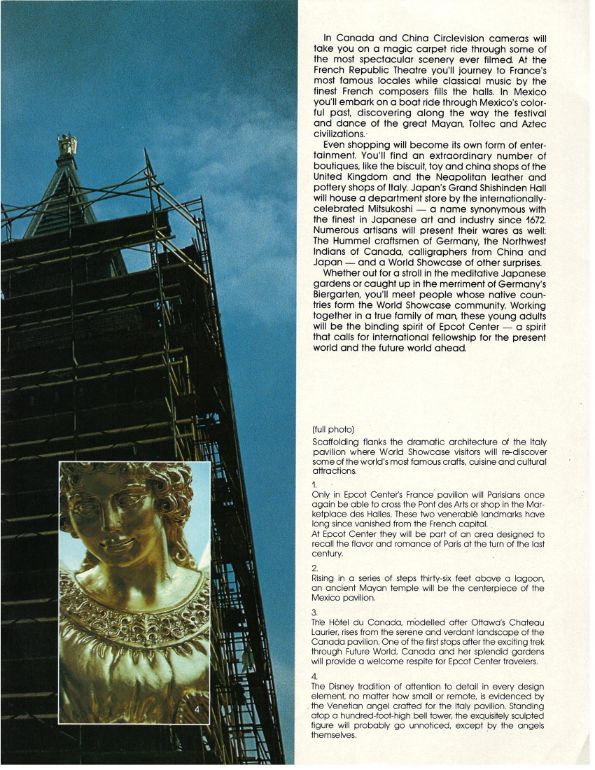 The back cover features a quote by Walt Disney, along with acknowledgement of the park’s corporate sponsors. 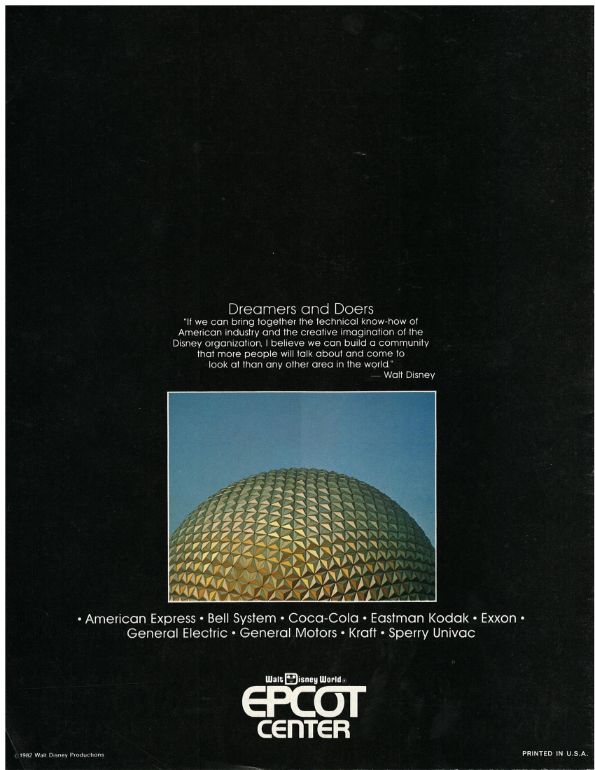 This served as a dramatic presentation of what was to come at EPCOT Center, but nothing can quite capture the drama better than the park itself!

Next
VIDEO: Disney Conservation Fund Celebrates 25 Years of Action and Education Across the Globe