With Disney Parks around the world closed for the foreseeable future, WDWNT is dipping into our archives of vintage parks materials for a look back into parks history! Get ready to travel back to February 1982 and see EPCOT Center from the ground up with the first issue of EPCOT Center Construction News!

Note: This article will detail the newsletter page by page, but WIGS Members will have access to download a full-resolution PDF of the entire publication. Head on over to Patreon.com/wdwnt to join WIGS, the WDWNT Inner Globe Society, for as little as $2 a month and unlock access to great content like this, and much more! 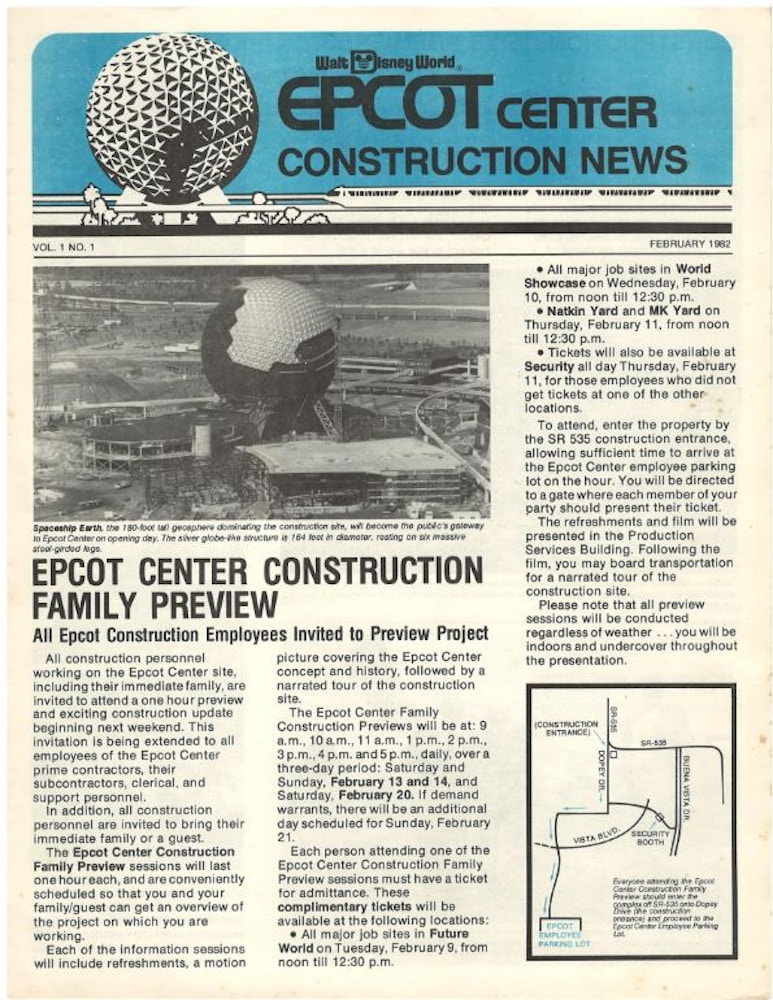 So it’s February 1982, and EPCOT Center is just eight months from opening its doors to the world. To keep the thousands of workers helping to bring this park to life informed of everything going on with the project, a newsletter has been created, with this passage used to introduce the publication:

“Volume 1, Number 1 signifies the first edition of Epcot Center’s Construction News, a newsletter to be published periodically to keep all construction employees and support personnel working at the Epcot Center site better informed.

With the onsite work force now approaching 4,000 strong, spread among 24 prime contractors and more than 500 subcontractors, it has become increasingly important that a newsletter be published to keep you better informed of items of general interest, new pavilions and facilities set for construction, continuing progress reports from across the job site, groundbreaking ceremonies, VIP’s visiting the site, and anything of news value to you.

This newsletter is therefore dedicated to you, the construction and support employees, who are responsible for building Epcot Center, the largest construction project in the world today.”

Above, you can see news of a preview weekend for those working for prime contractors and subcontractors and their families, complete with a viewing of a film about the history and an outline of EPCOT Center and a tour around the construction site. 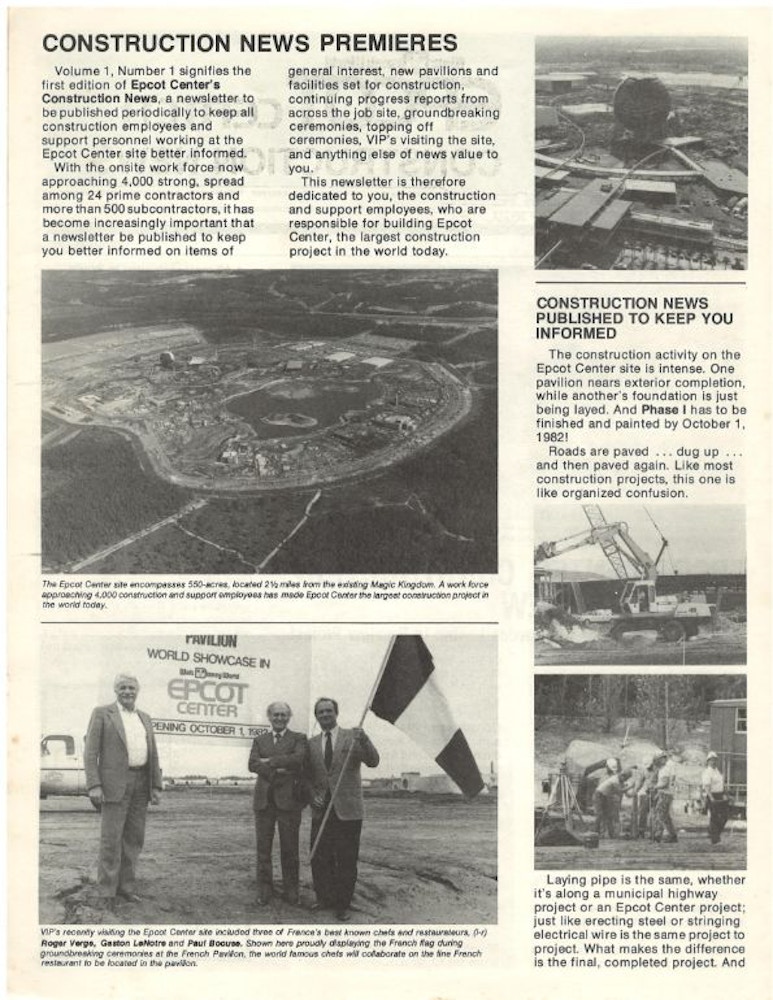 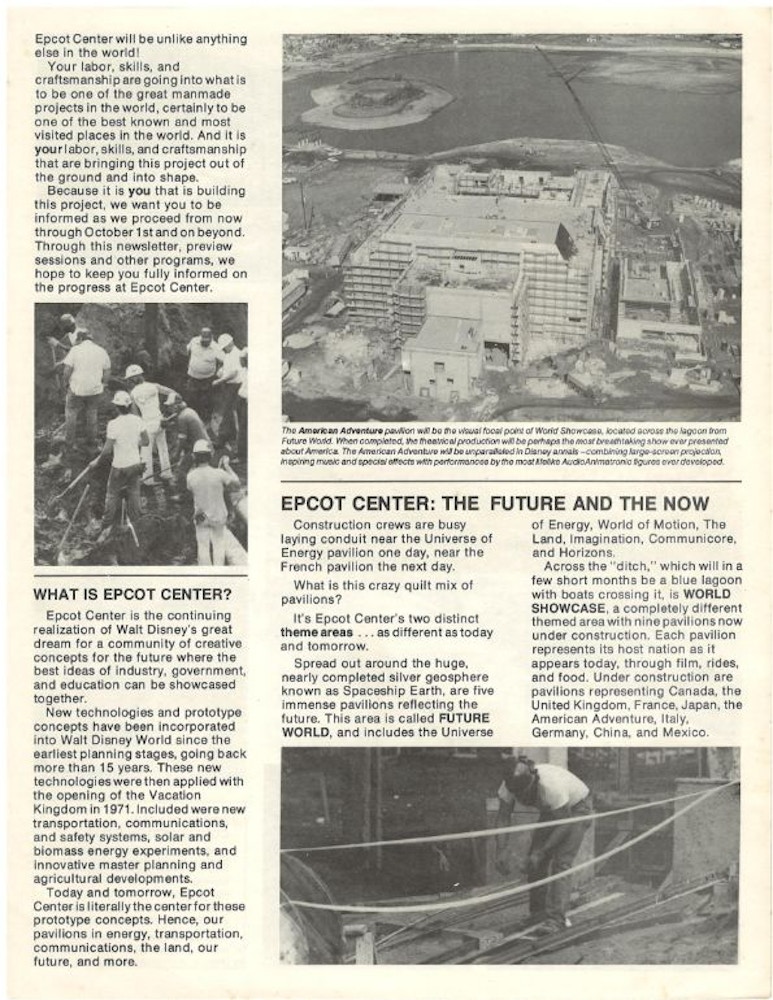 These pictures and reports really show how much is left to be done in those eight months. The above aerial photo of The American Adventure shows that work is far from over, and World Showcase Lagoon is referred to as a “ditch!” 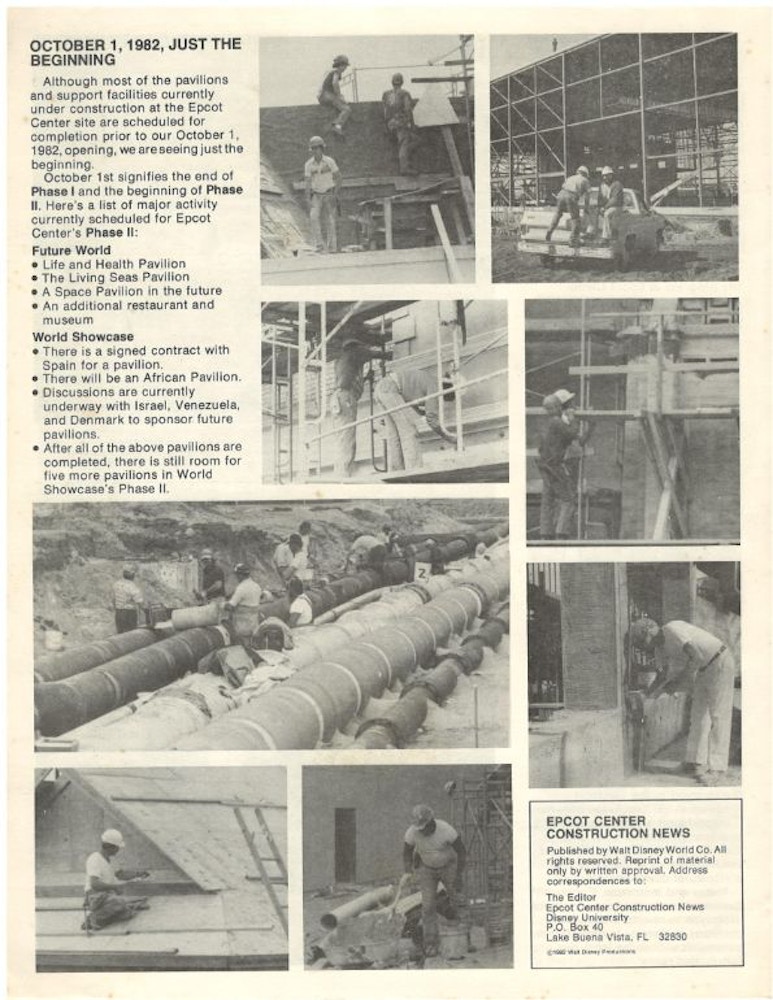 The final page shows the construction staff hard at work to build the future EPCOT Center, while also reminding readers that what opened on October 1st, 1982 was only the first phase of the park. Already in the works were the Health and Life Pavilion (later to be known as Wonders of Life) and The Living Seas, along with several projects that were ultimately abandoned, including the original Space Pavilion, along with additions in World Showcase for Spain, Equatorial Africa, Israel, Venezuela, and Denmark. It’s a really interesting artifact of a time when the park of the future was still in the making.