With Disney Parks around the world closed for the foreseeable future, WDWNT is dipping into our archives of vintage parks materials for a look back into parks history! Today, we’re heading back to before the beginning of EPCOT Center with an 1980 article from Orlando-land magazine! 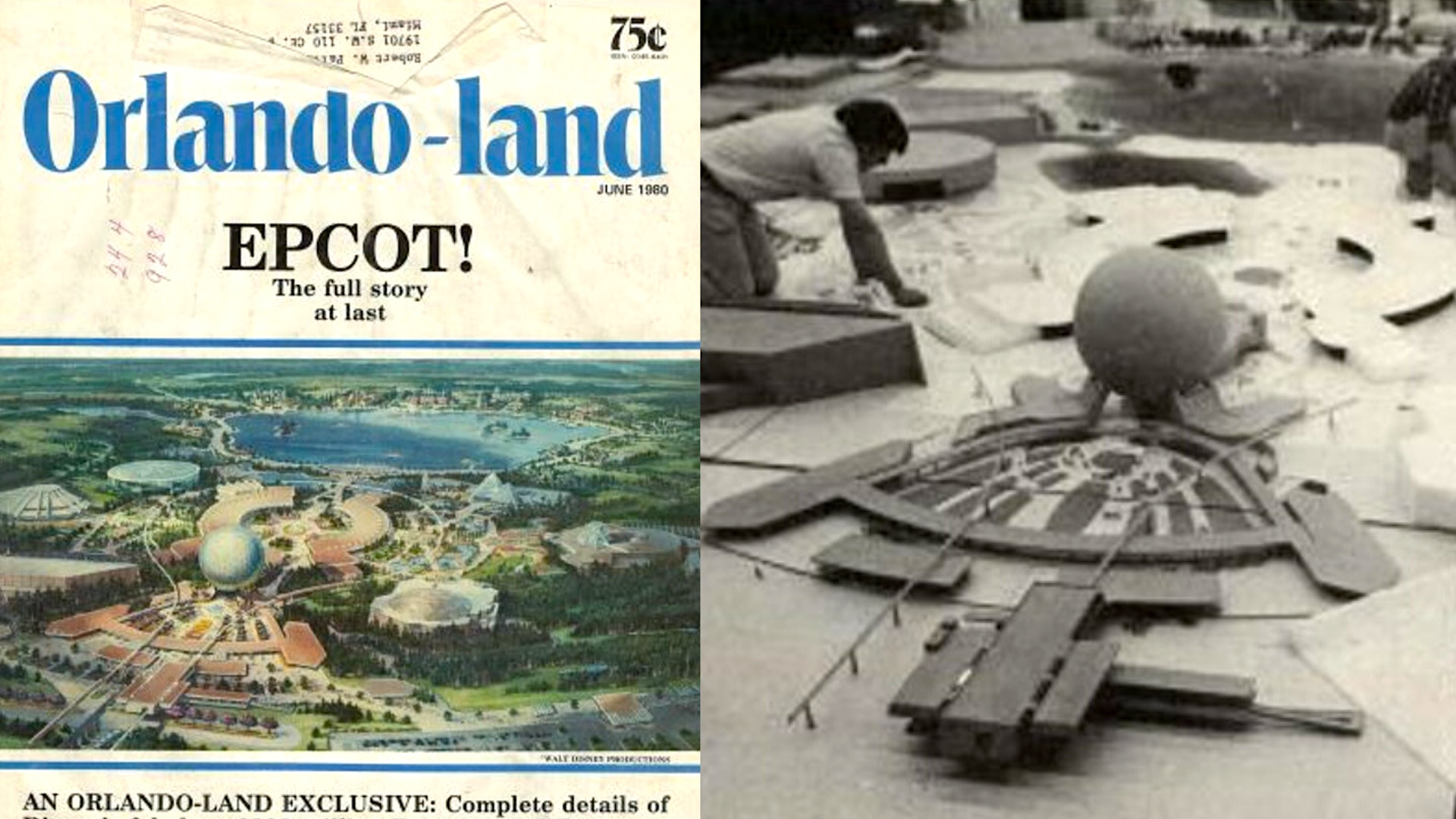 Note: This article will detail the magazine piece page by page, but WIGS Members will have access to download a full-resolution PDF of the entire thing. Head on over to Patreon.com/wdwnt to join WIGS, the WDWNT Inner Globe Society, for as little as $2 a month and unlock access to great content like this, and much more! 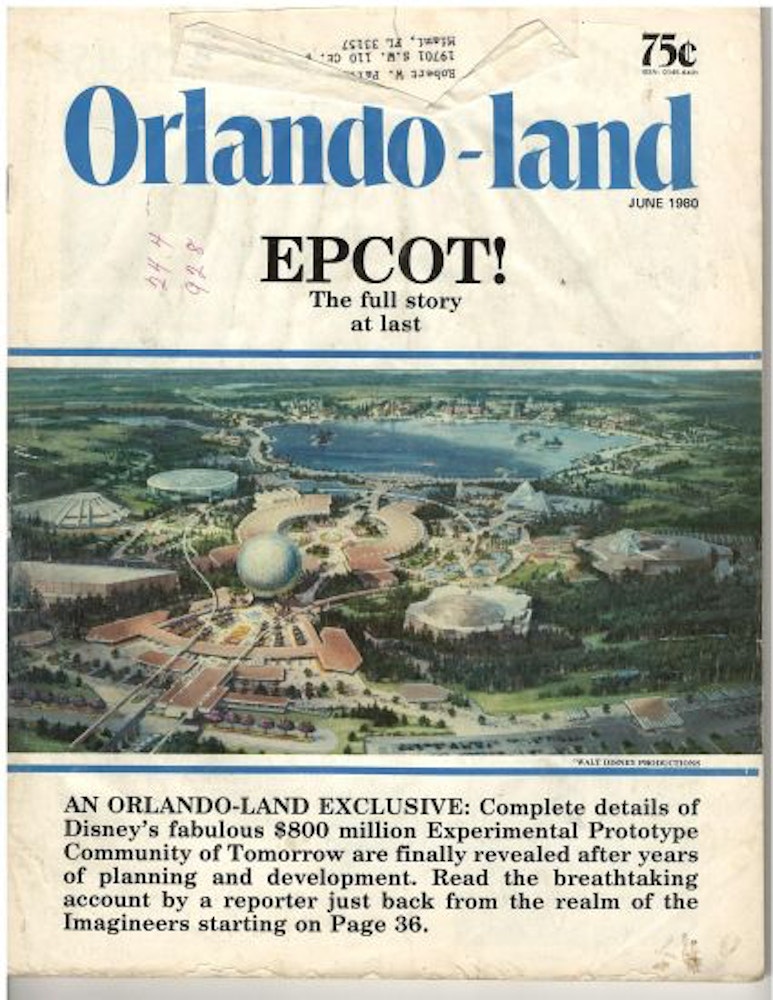 Can you believe that this patch of land would soon be home to Journey into Imagination? 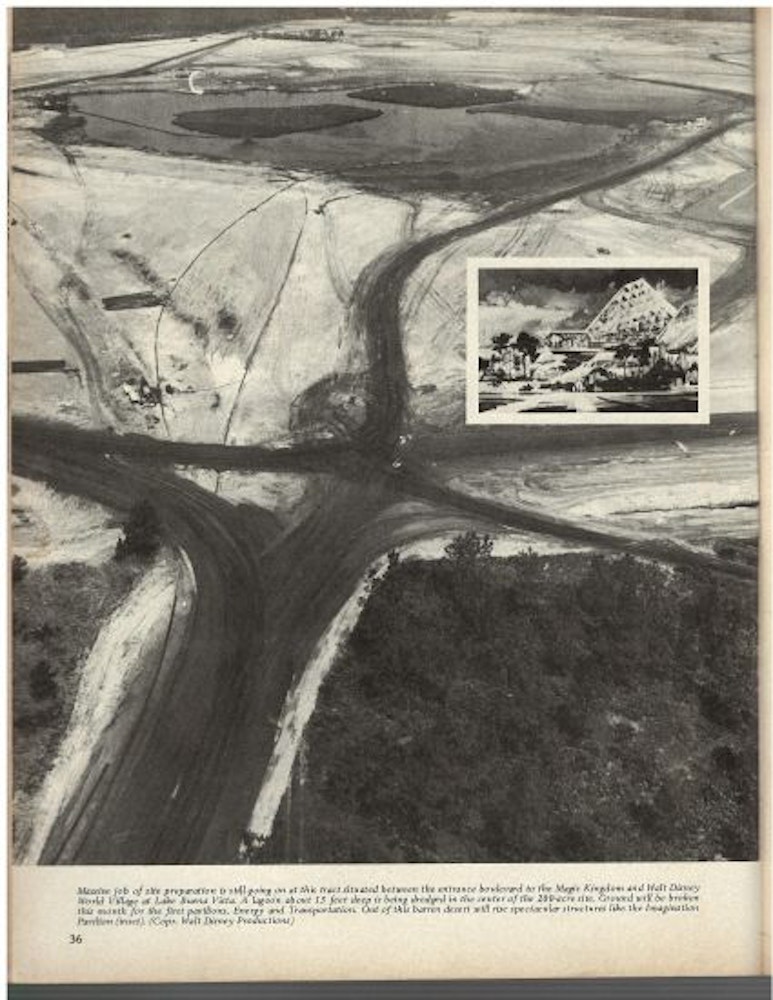 In “Inside EPCOT,” author Edward L. Prizer offers an account of his tour through WED Enterprises, where EPCOT Center was still being planned and designed. 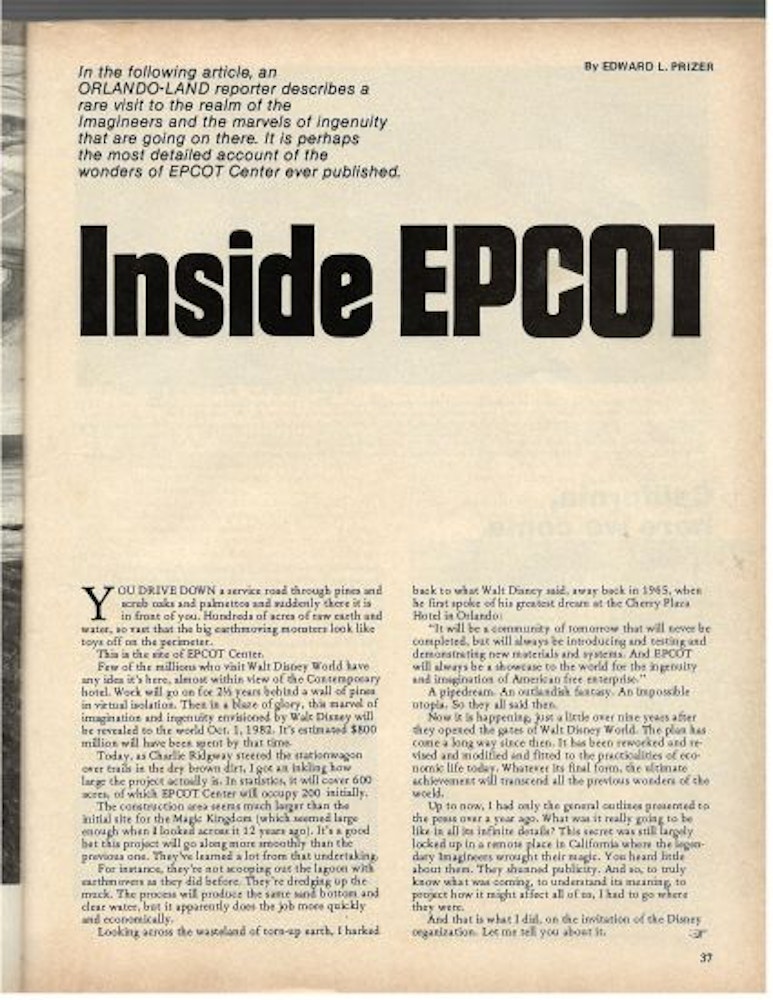 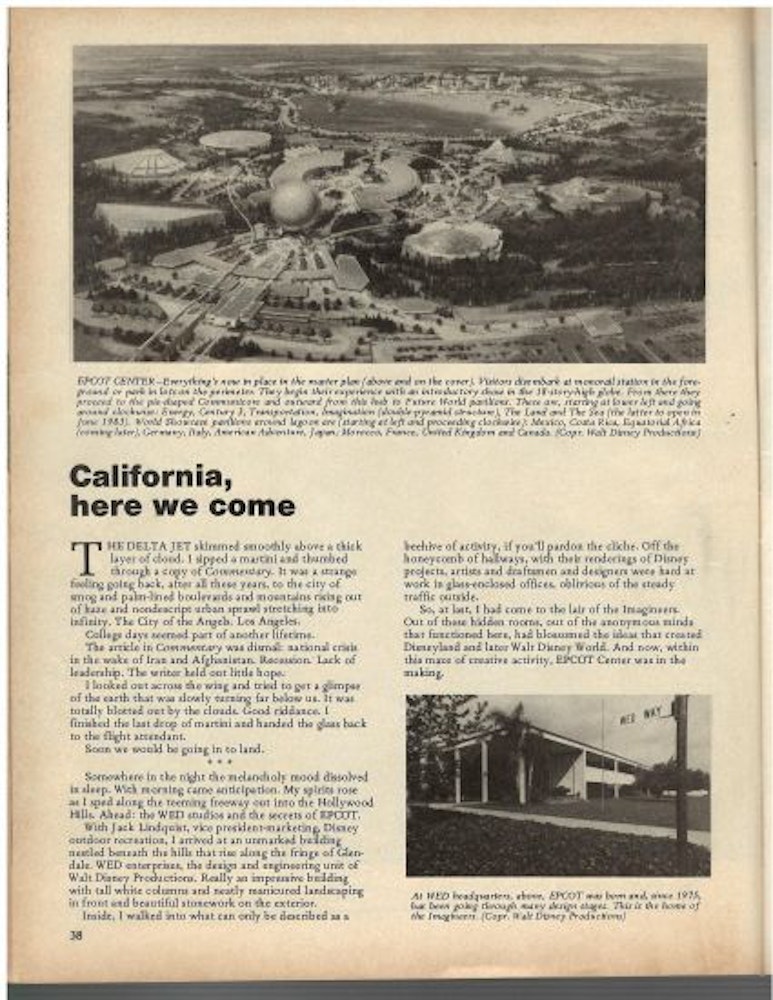 Now, if you’ve seen the second episode of “The Imagineering Story,” you know how big an undertaking creating EPCOT Center was. Prizer recounts how the creation of components (they all had to be created in California before they were sent to Florida) spanned beyond the Disney lot and into places like a 20th Century Fox sound stage for the creation of a mural in the Universe of Energy or a plant in Tujunga Canyon for elements for World of Motion. 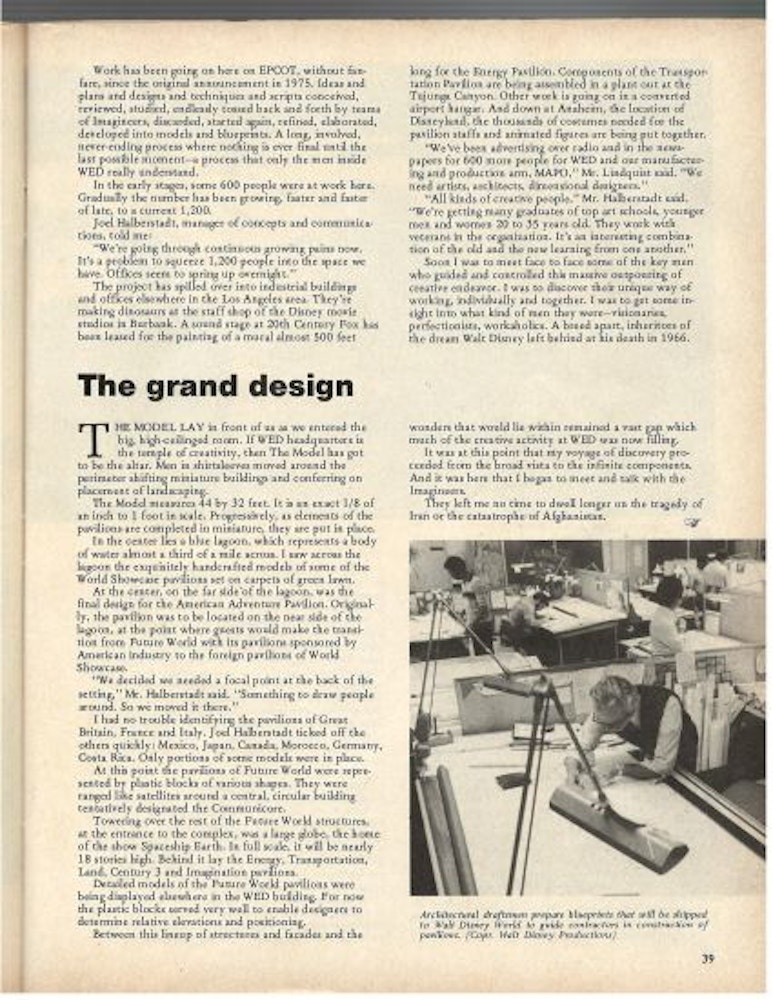 Of course, this early on in EPCOT Center’s history, there are some elements that would undergo changes. The article lists The Seas pavilion as opening in June 1983, only about two and a half years before The Living Seas would finally welcome guests. There’s also mention of the abandoned Costa Rica pavilion and Century 3, the original name for Horizons. 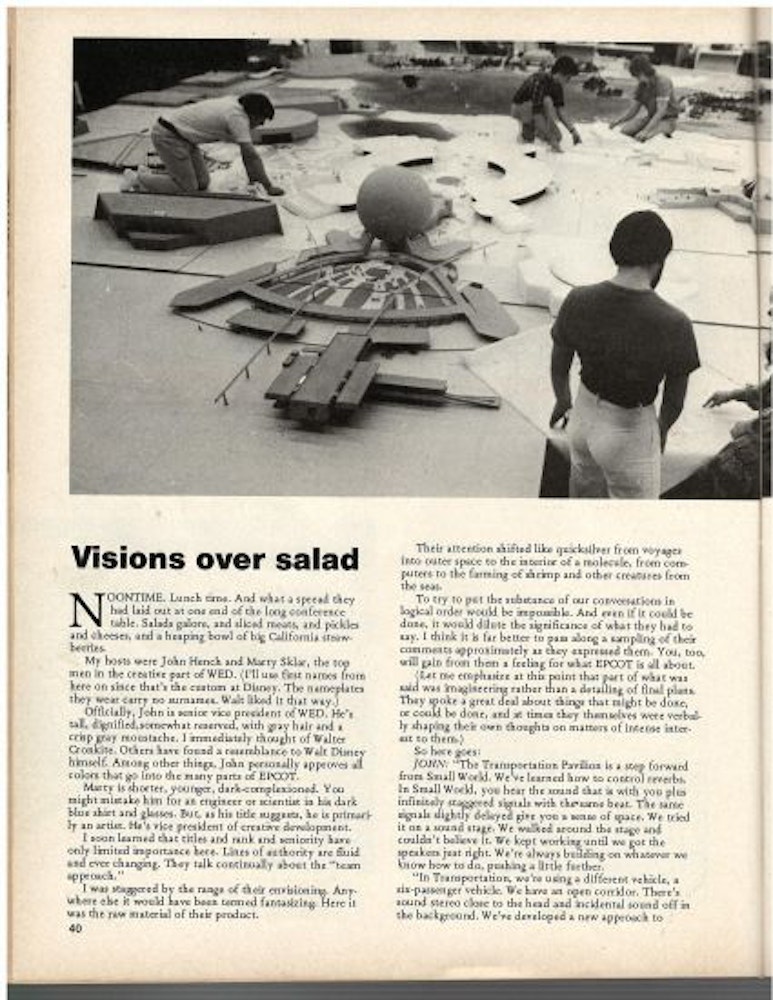 Who wouldn’t want to have lunch with John Hench and Marty Sklar? At this lunch, the future Disney Legends beam about the new technologies developed for the park. 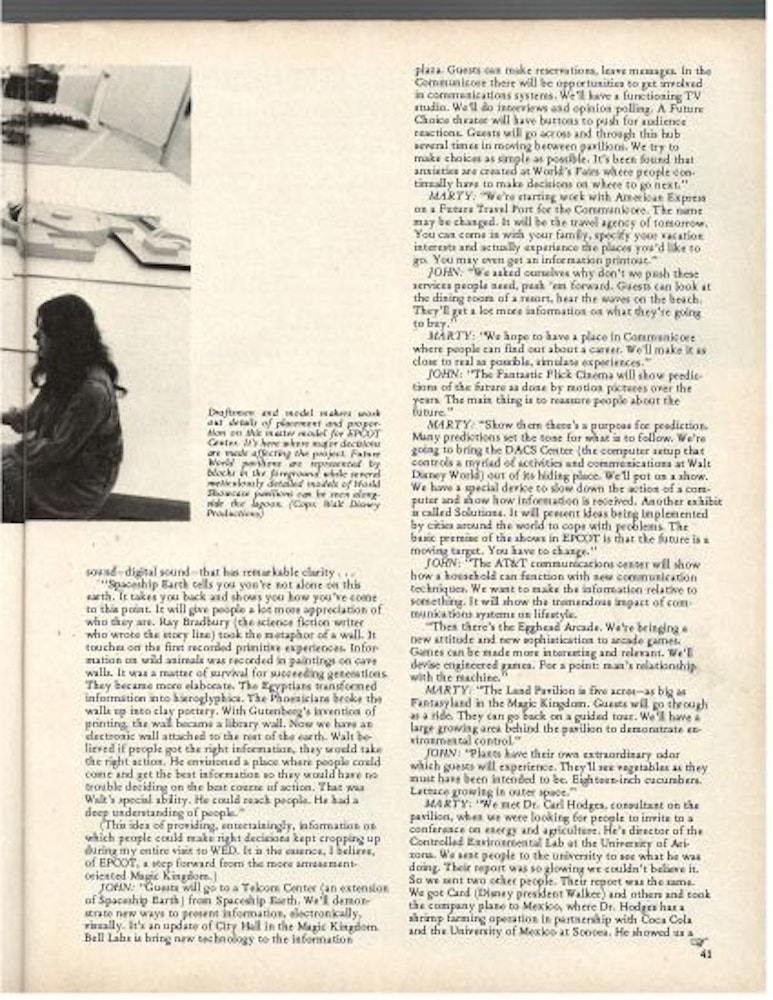 Hench talks about the “Fantastic Flick Cinema” for Communicore, which featured “predictions of the future as done by motion pictures over the years.” The idea may have never made it to Communicore, but it was later used for Horizons. 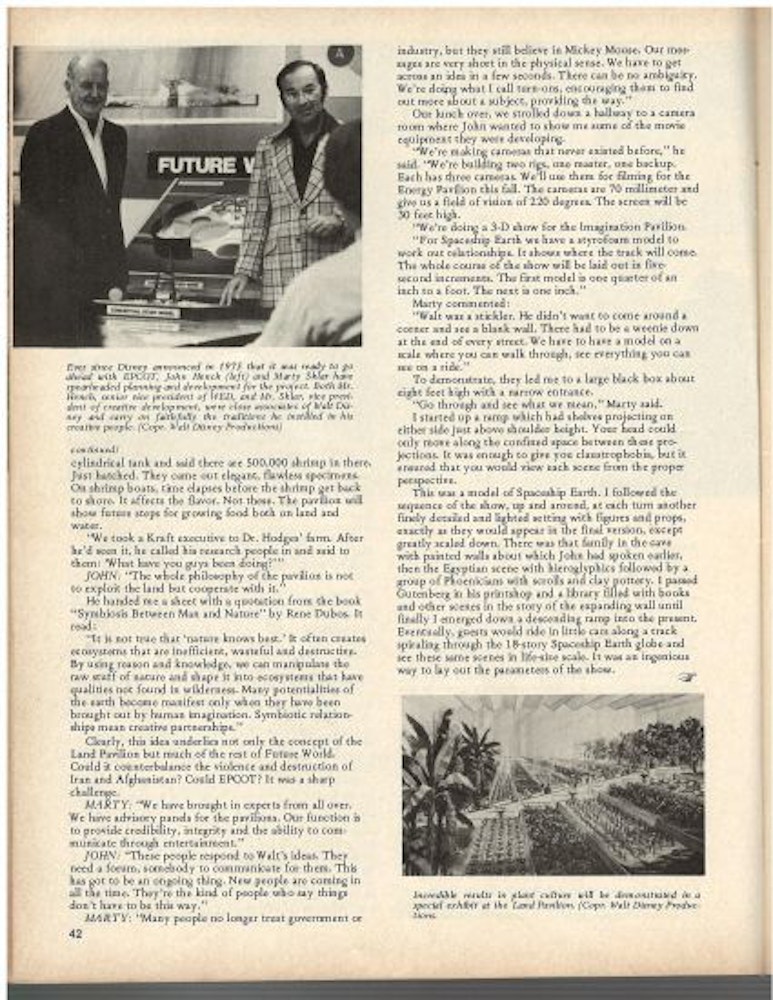 I love this quote from Sklar about the purpose of EPCOT Center: “Many people no longer trust government or industry, but they still believe in Mickey Mouse. Our messages are very short in the physical sense. We have to get across an idea in a few seconds. There can be no ambiguity. We’re doing what I call turn-ons, encouraging them to find out more about a subject, providing the way.” 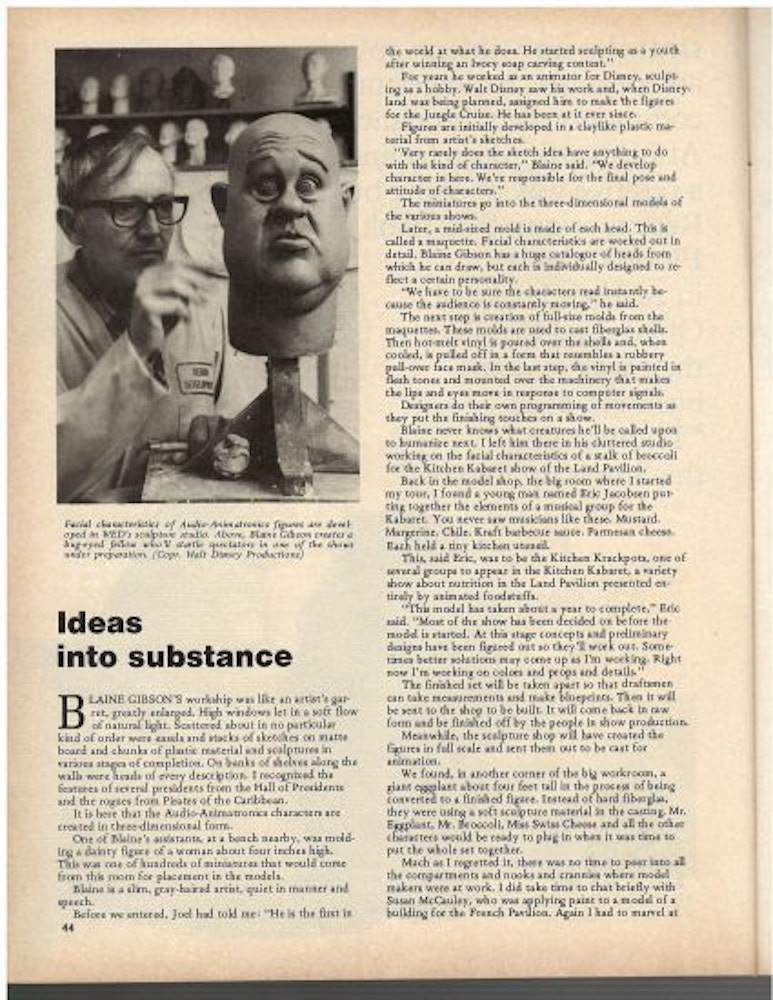 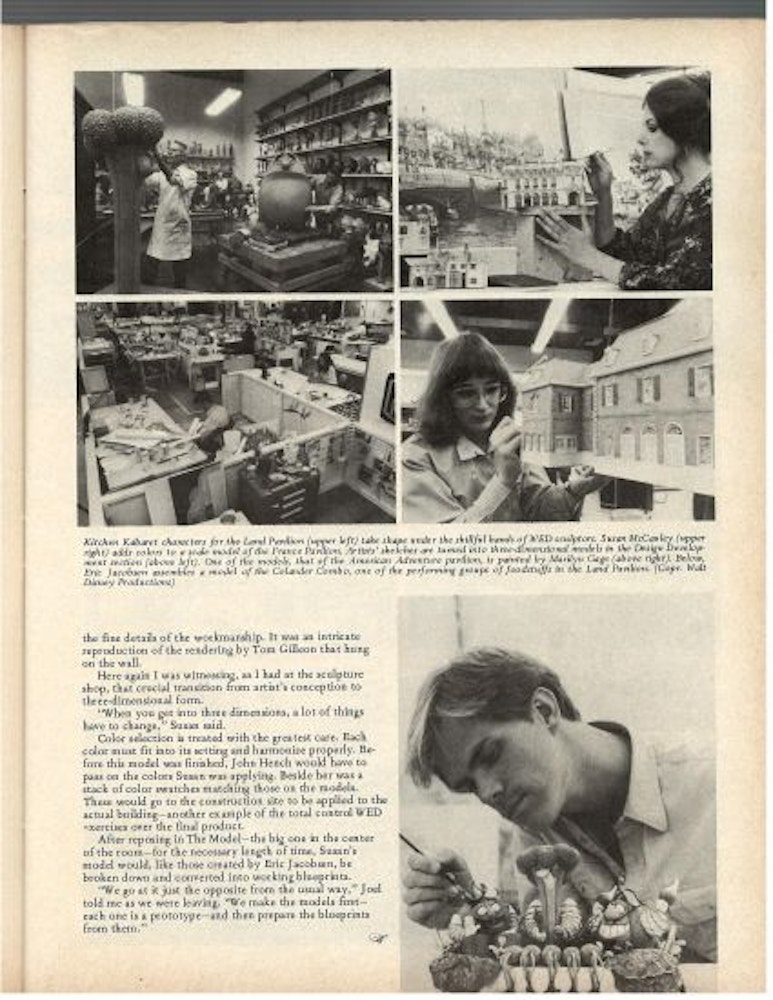 They’re already hard at work on the stars of the Kitchen Kabaret! And below, you can see the Universe of Energy mural that was being painted at the 20th Century Fox studios! 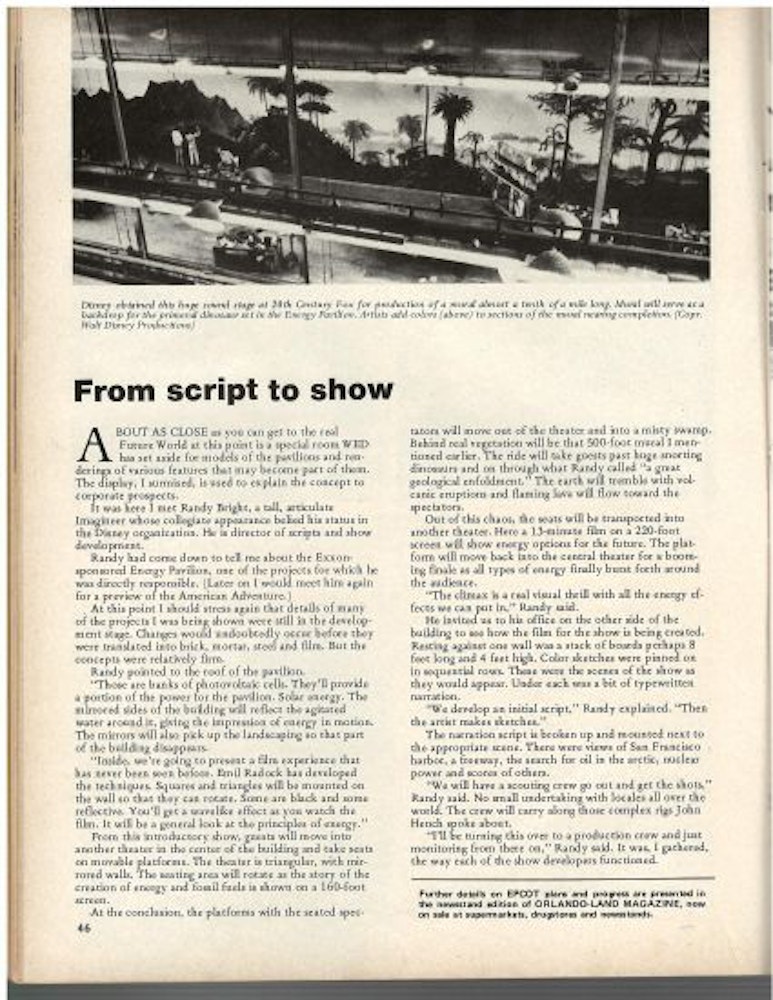 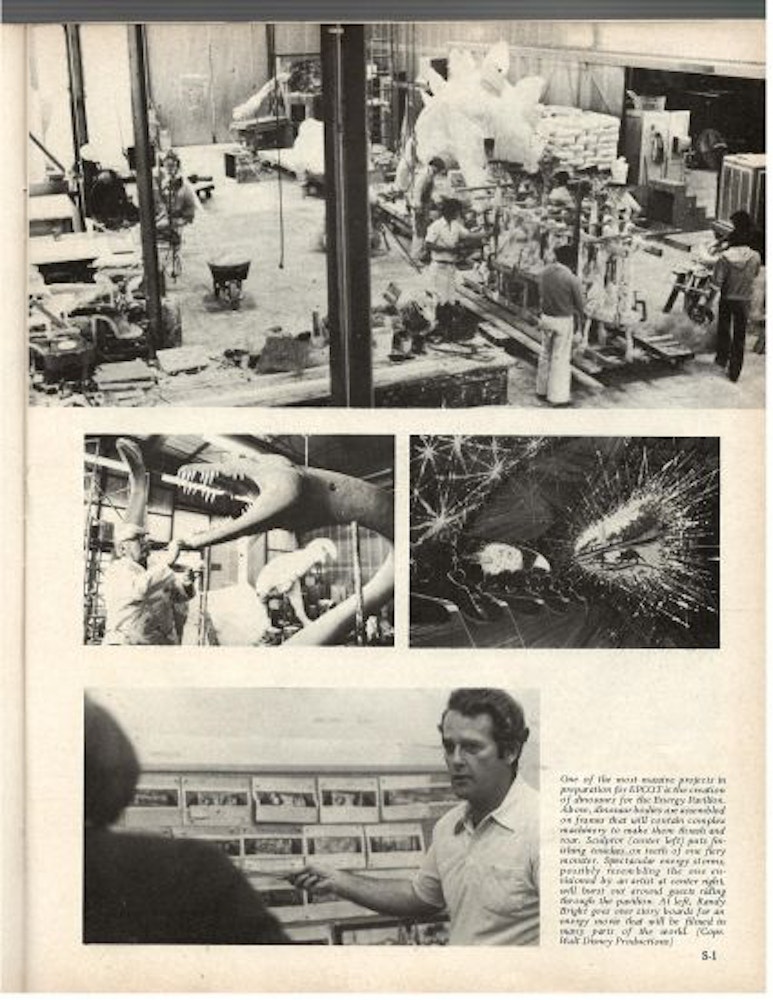 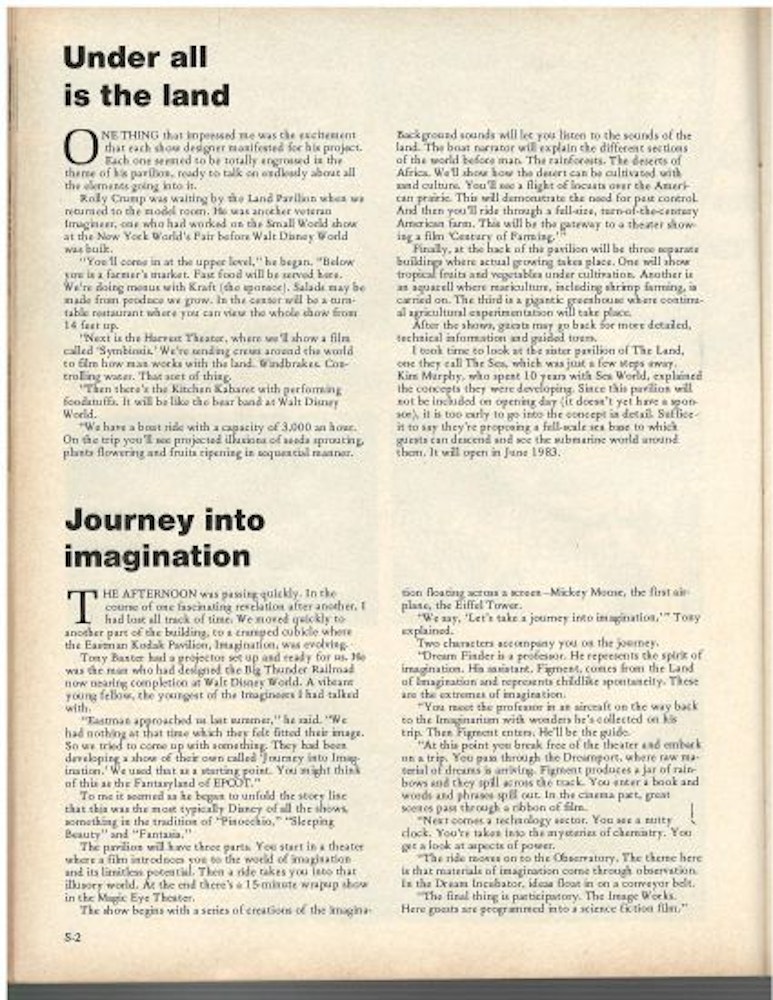 There’s two legendary Imagineers at work: Rolly Crump on The Land, and Tony Baxter on Journey into Imagination. 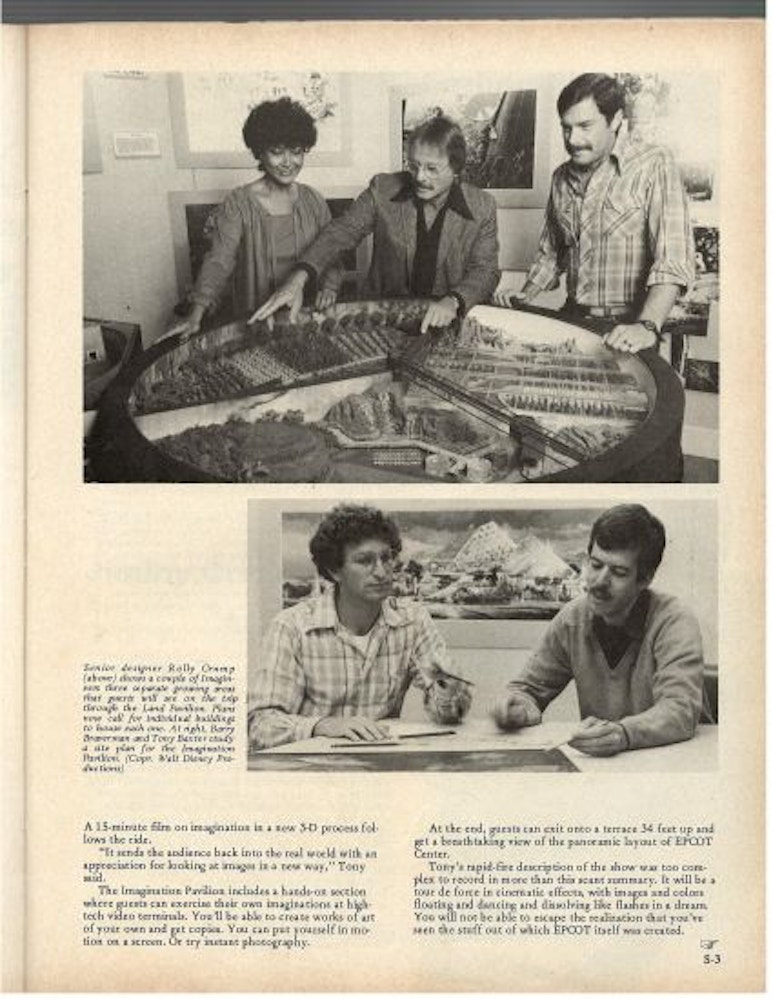 Look into the future of the future, with a sneak peek of what would become Horizons. Even in these early stages, the show revolves around the family unit. 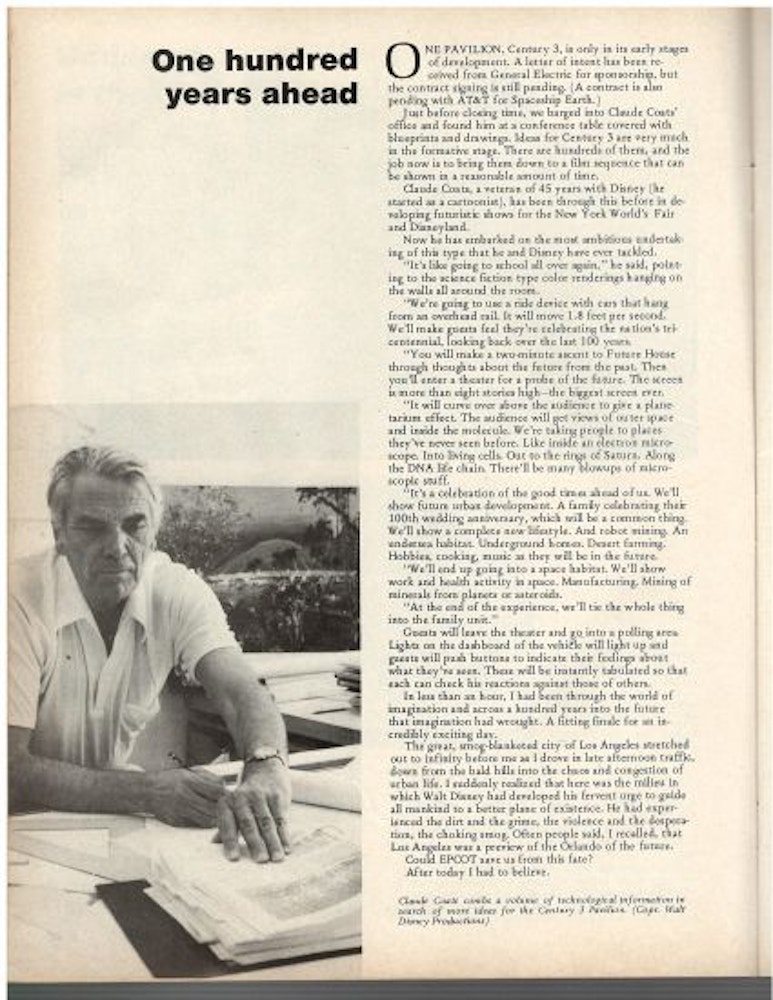 One of Disney’s “Nine Old Men,” Ward Kimball, also discusses World of Motion, the only theme park attraction the iconic animator ever worked on. 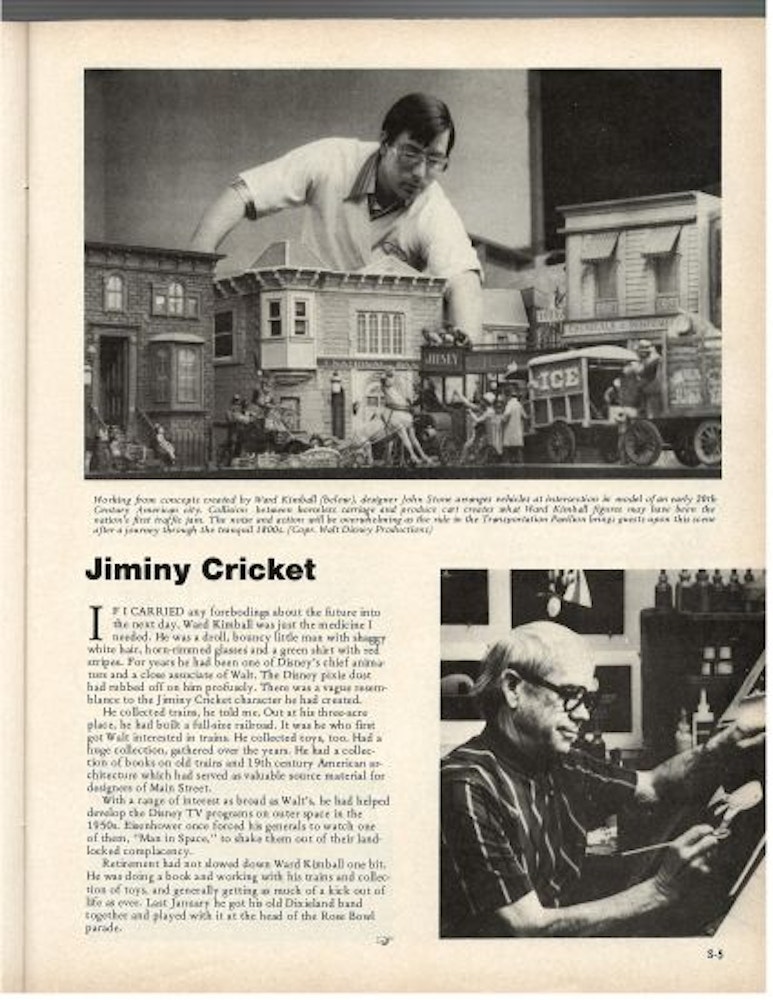 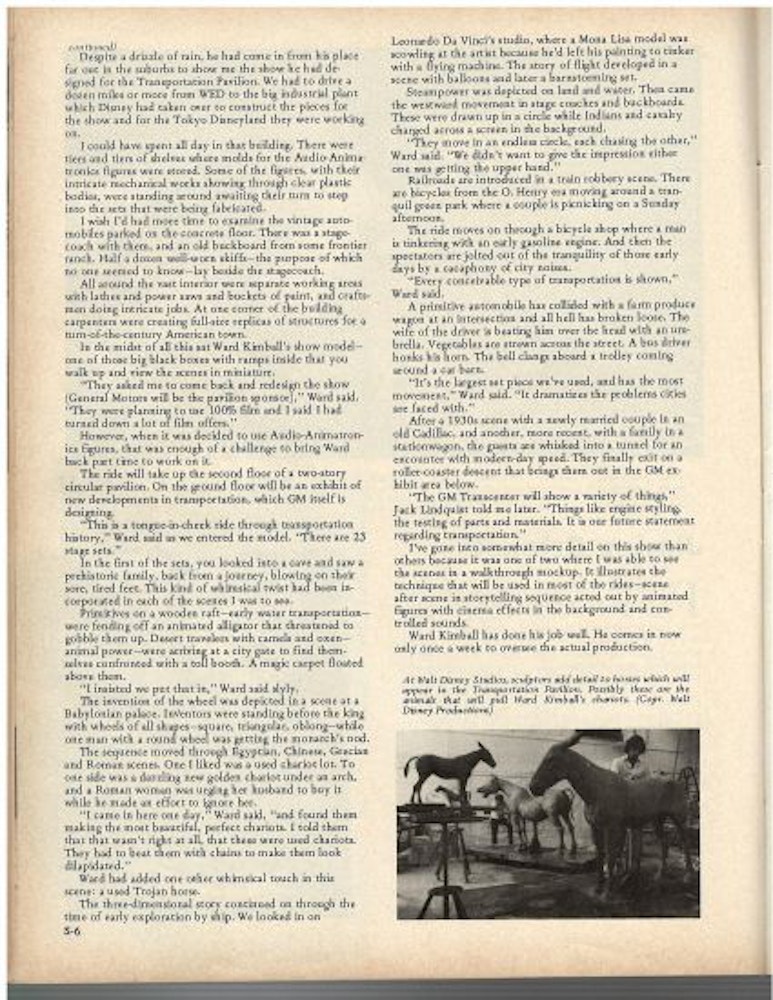 Harper Goff and Dave Baron offer a quick trip around the world with a preview of World Showcase. 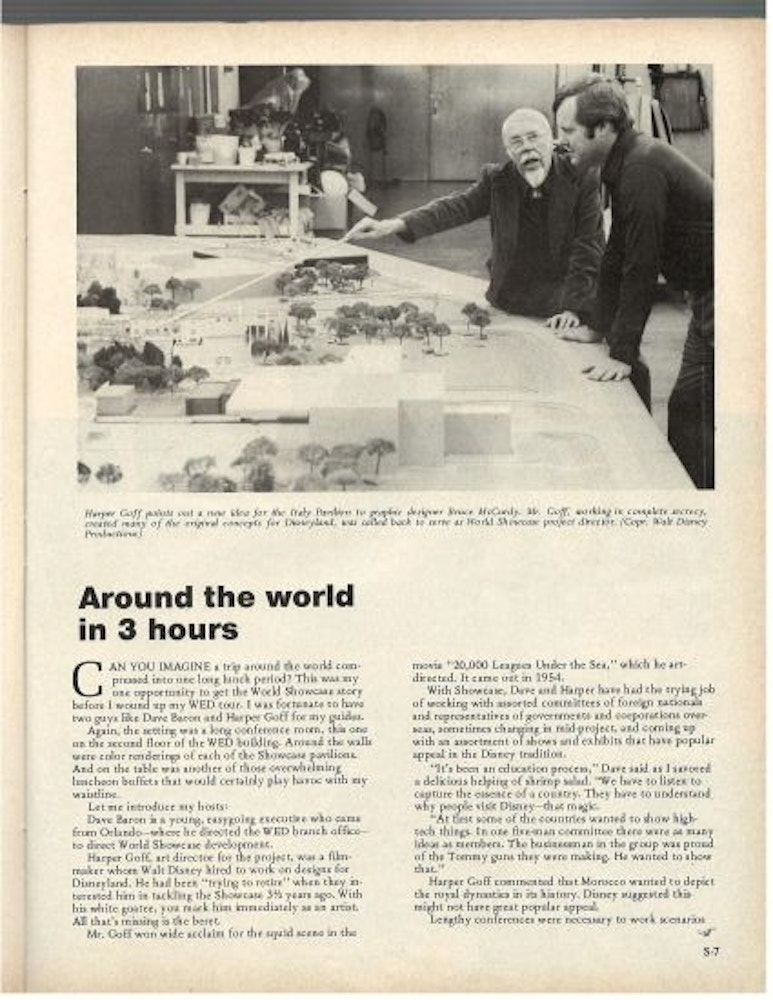 Look at that gorgeous model of the Costa Rica pavilion! 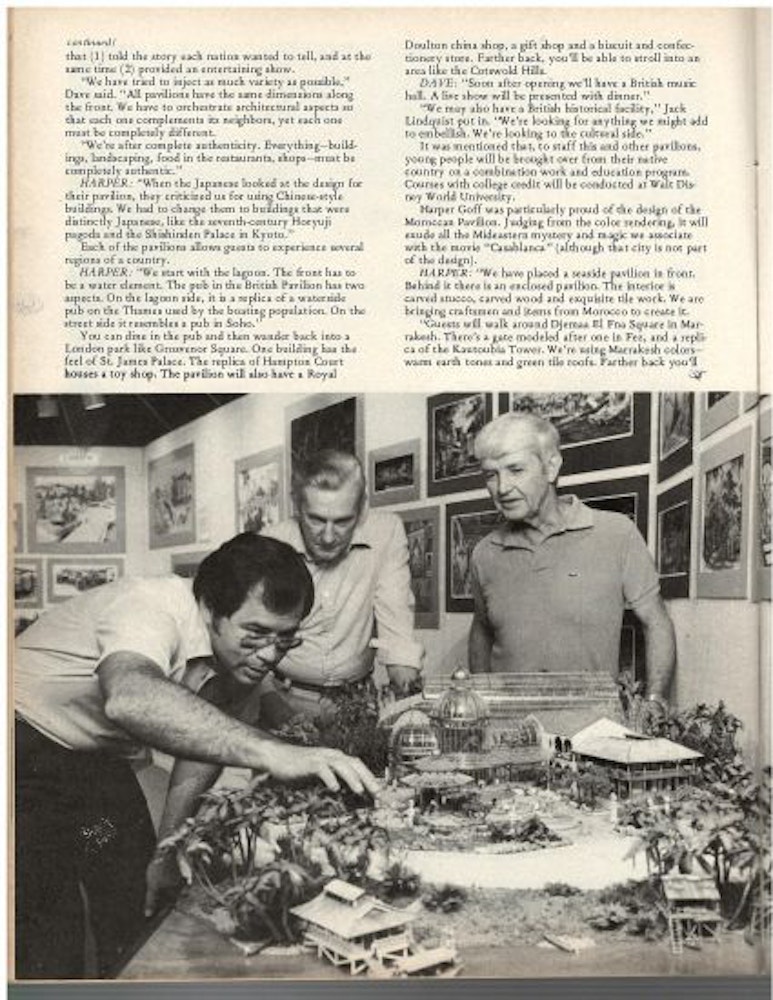 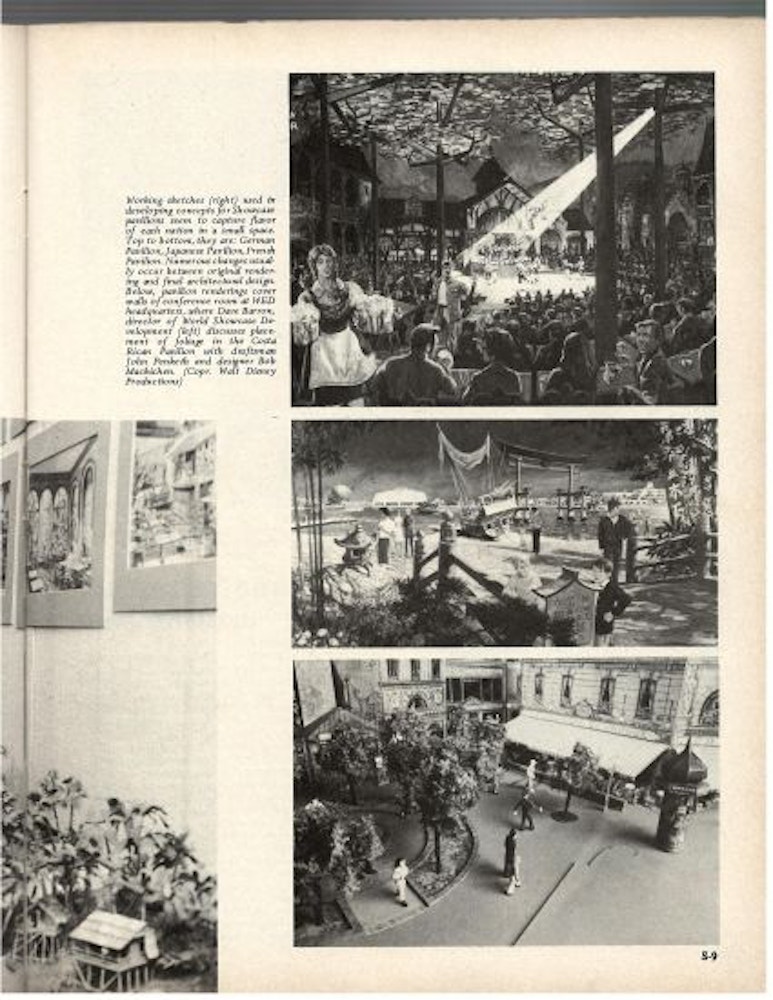 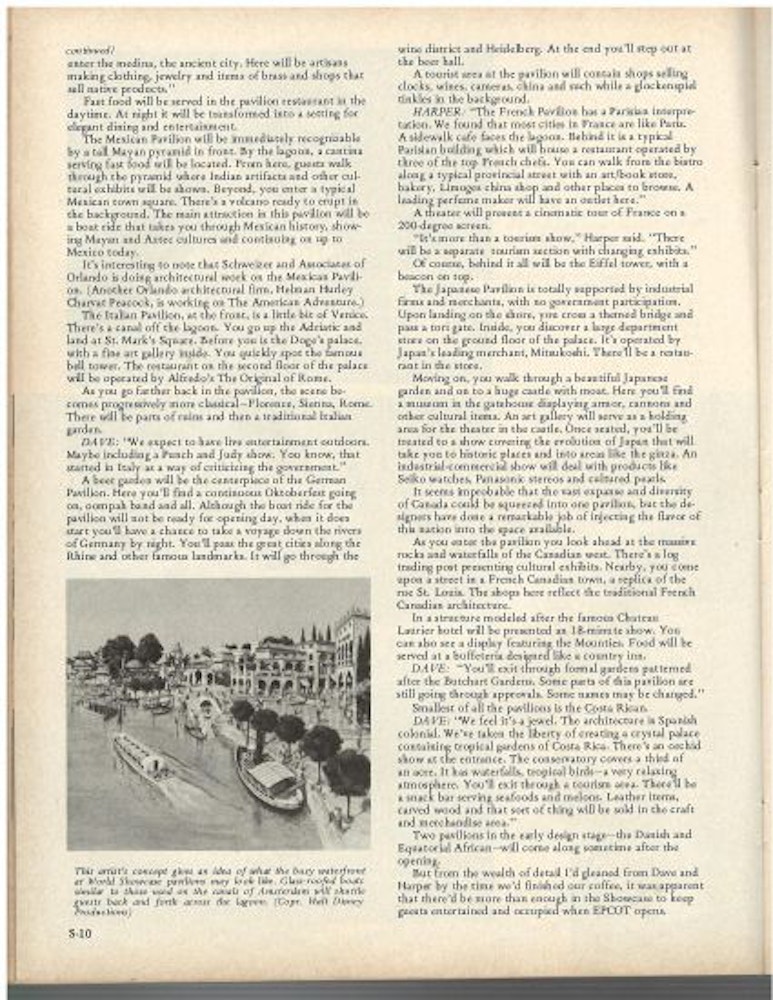 There’s even a description of the Costa Rica pavilion by Baron: “We feel it’s a jewel. The architecture is Spanish colonial. We’ve taken the liberty of creating a crystal palace containing tropical gardens of Costa Rica. There’s an orchid show at the entrance. The conservatory covers a third of an acre. It has waterfalls, tropical birds – a very relaxing atmosphere. You’ll exit through a tourism area. There’ll be a snack bar serving seafoods and melons. Leather items, carved wood and that sort of thing will be sold in the craft and merchandise area.” There’s even a brief mention of the also-abandoned Equatorial Africa and Denmark pavilions. 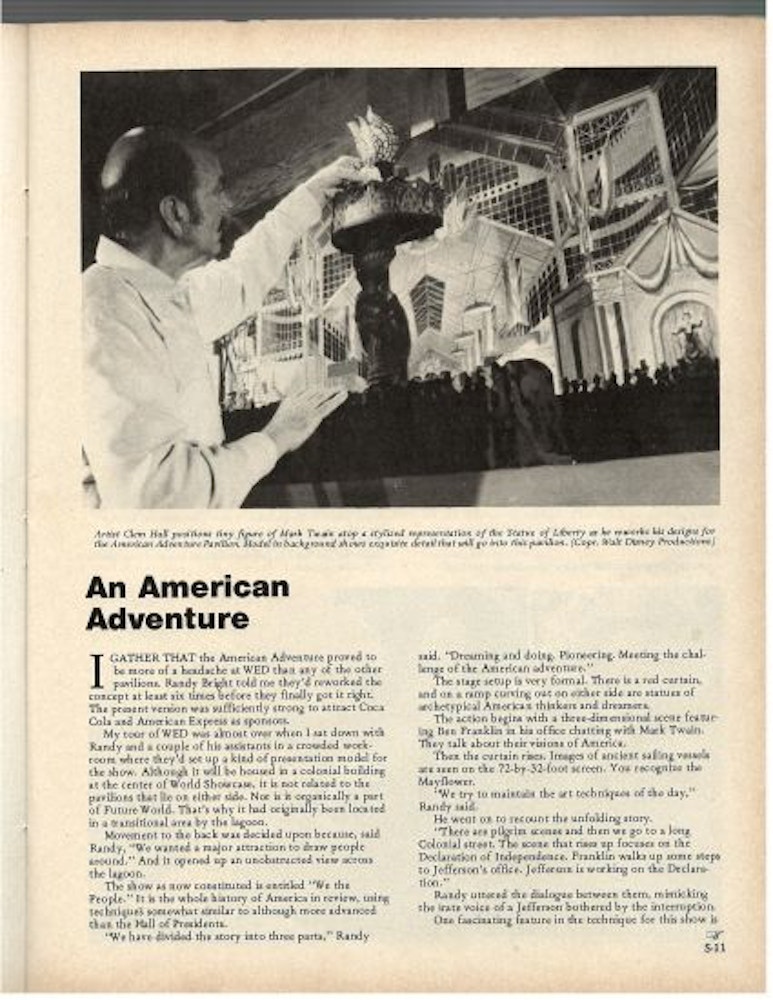 Of course, the centerpiece of World Showcase is The American Adventure, which is described scene-by-scene in this preview. 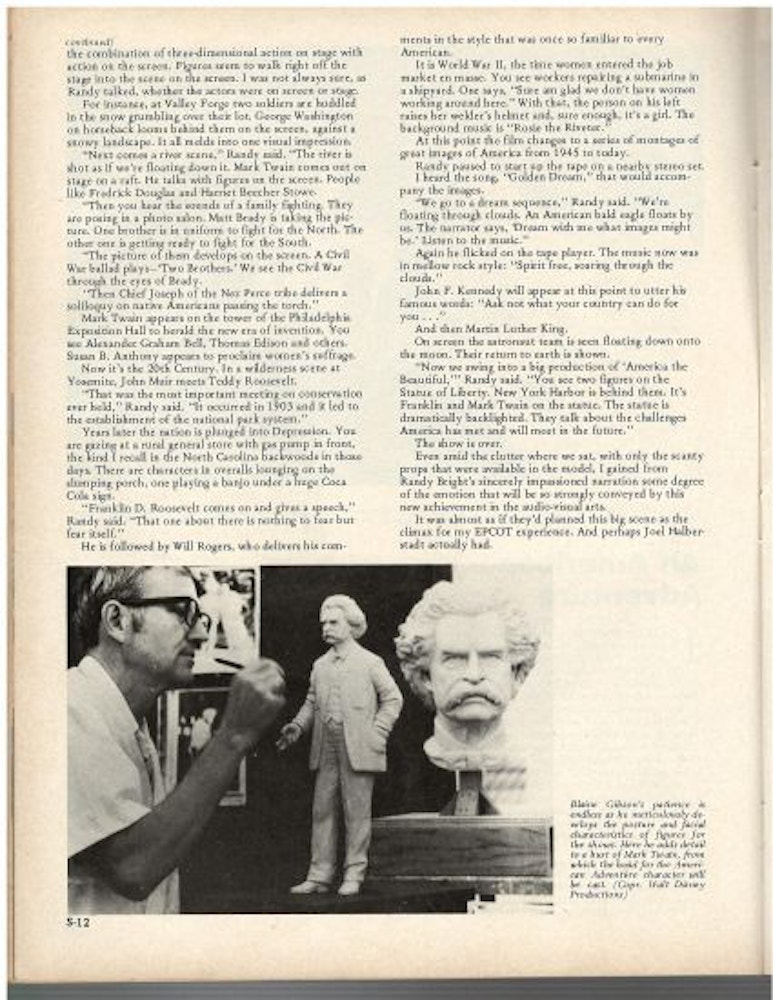 The preview closes with a salute to the Imagineers and all they were doing to meet the park’s October 1st, 1982 opening date. At time this article was written, some pavilions hadn’t even broken ground yet! 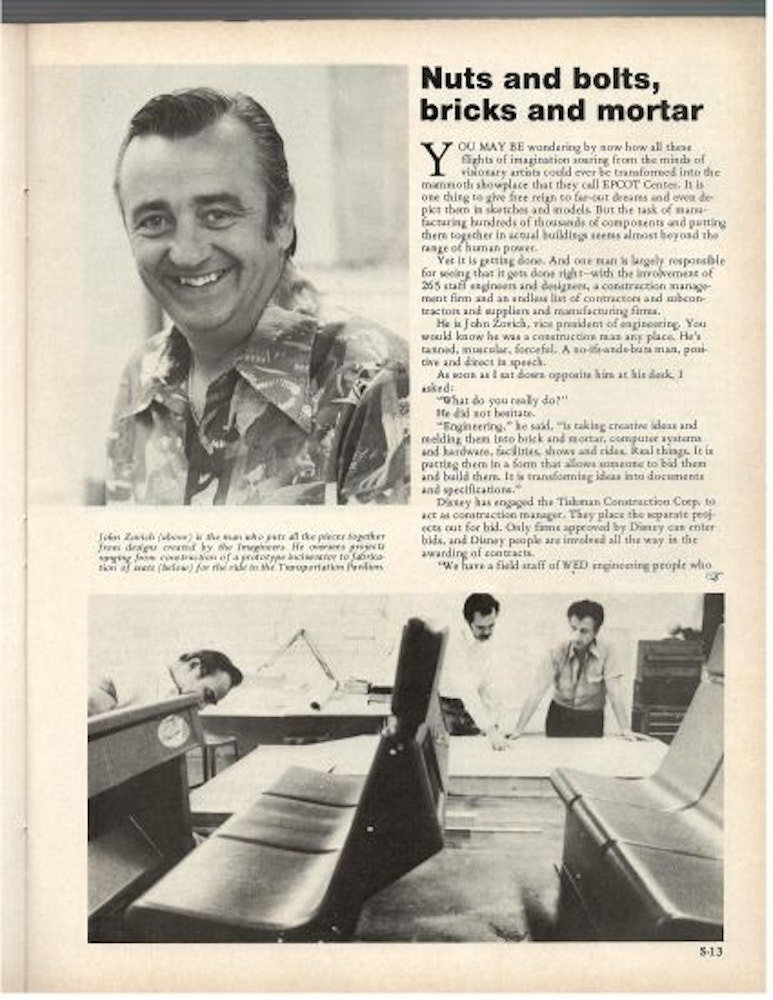 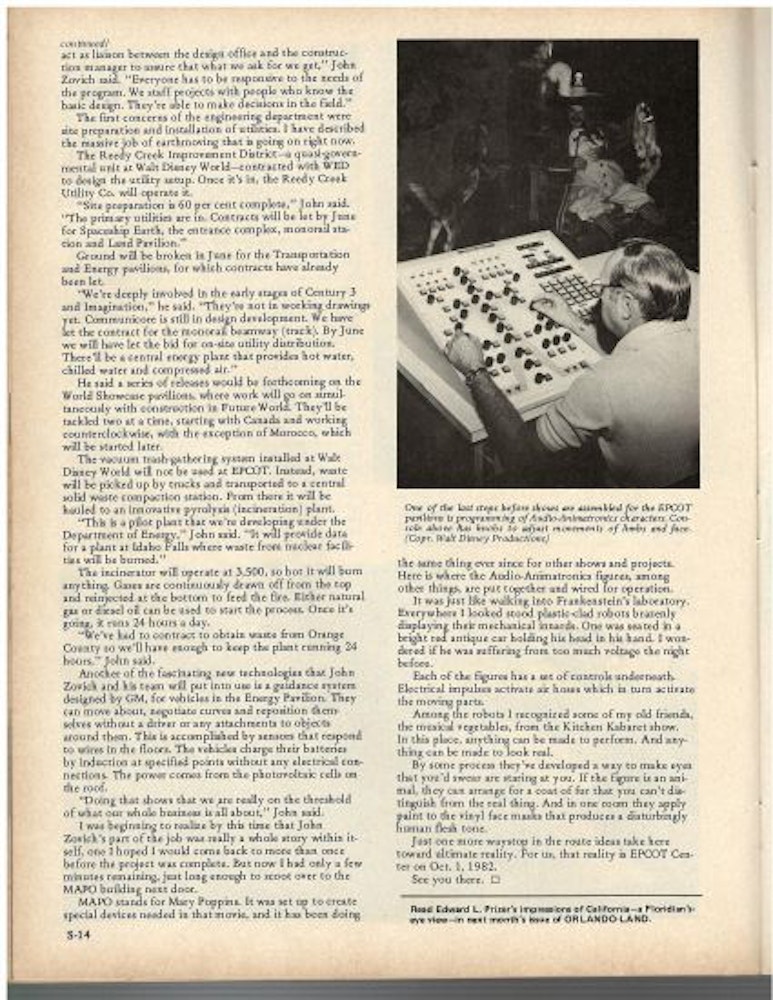 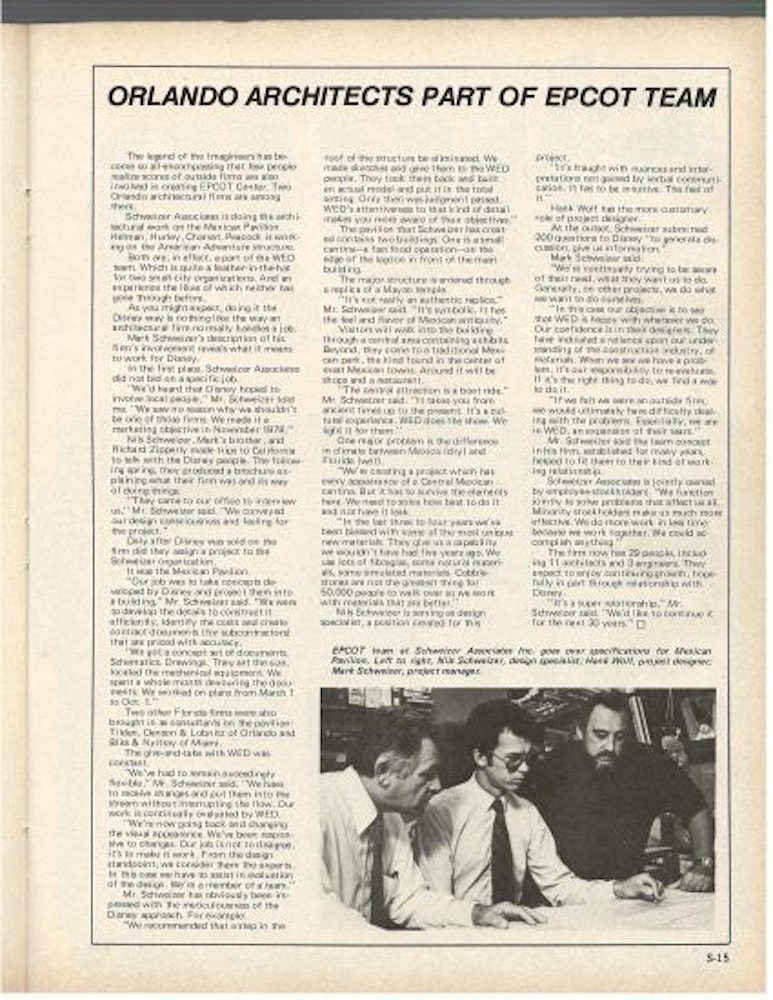 For EPCOT fans, this is pure catnip! I’ve already got “We’re Getting Ready for You” stuck in my head! And the look at the Costa Rica pavilion is just the icing on the cake. This is one article that’s definitely worth reading!