With Disney Parks around the world closed for the foreseeable future, WDWNT is dipping into our archives of vintage parks materials for a look back into parks history! Today, we’re flying away to EPCOT Center not long after opening with this Eastern Airlines magazine supplement! 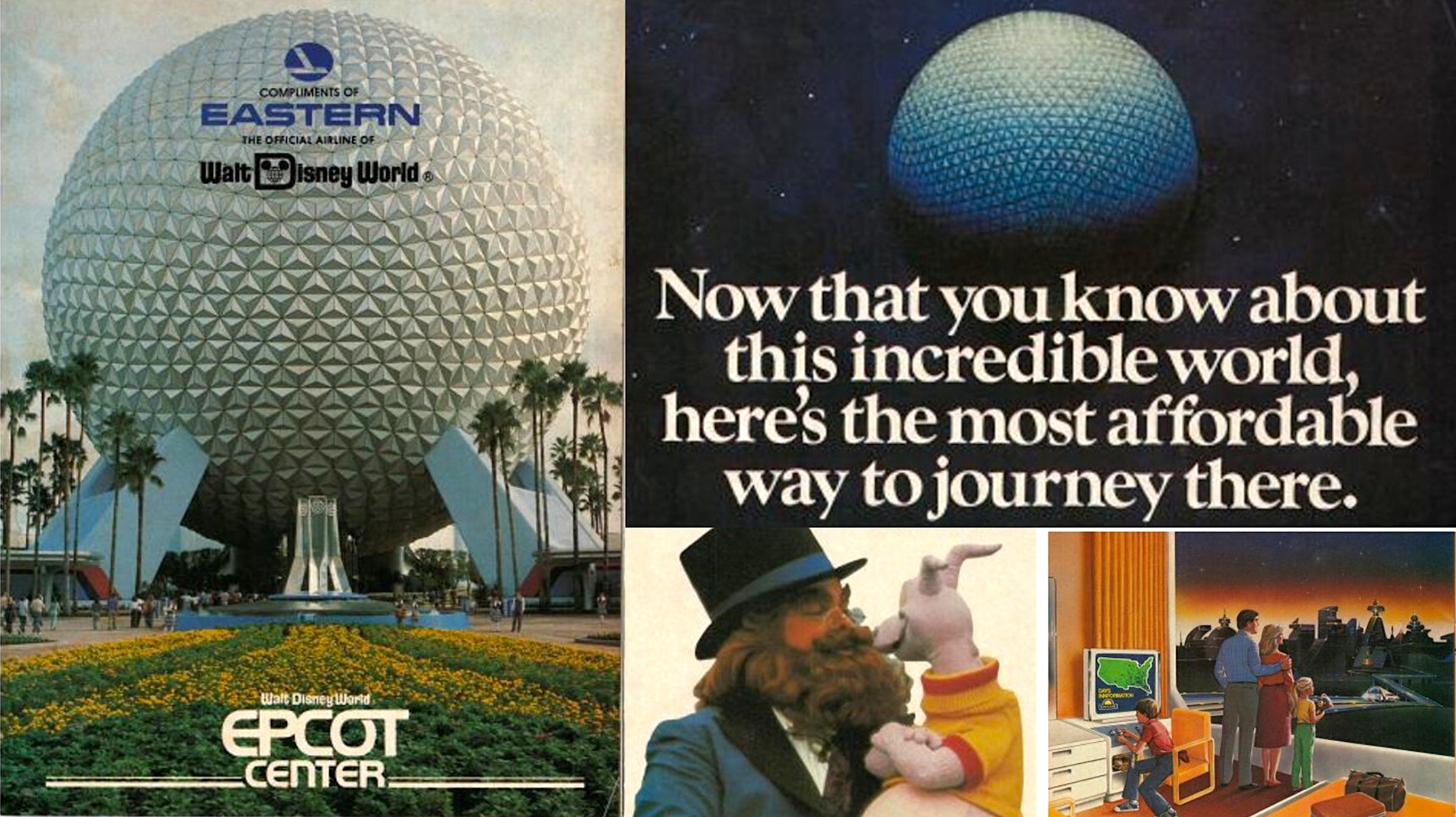 Note: This article will detail the supplement page by page, but WIGS Members will have access to download a full-resolution PDF of the entire guide. Head on over to Patreon.com/wdwnt to join WIGS, the WDWNT Inner Globe Society, for as little as $2 a month and unlock access to great content like this, and much more! 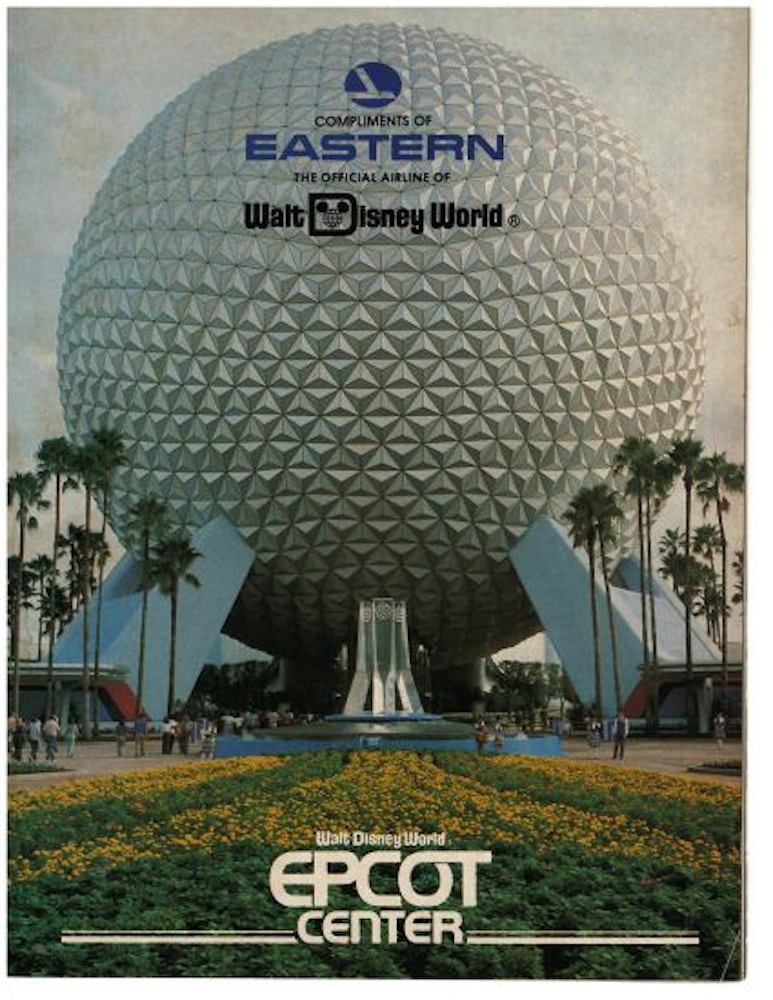 It really was a brave new world when EPCOT Center opened on October 1st, 1982. Who remembers the three monoliths in front of Spaceship Earth! 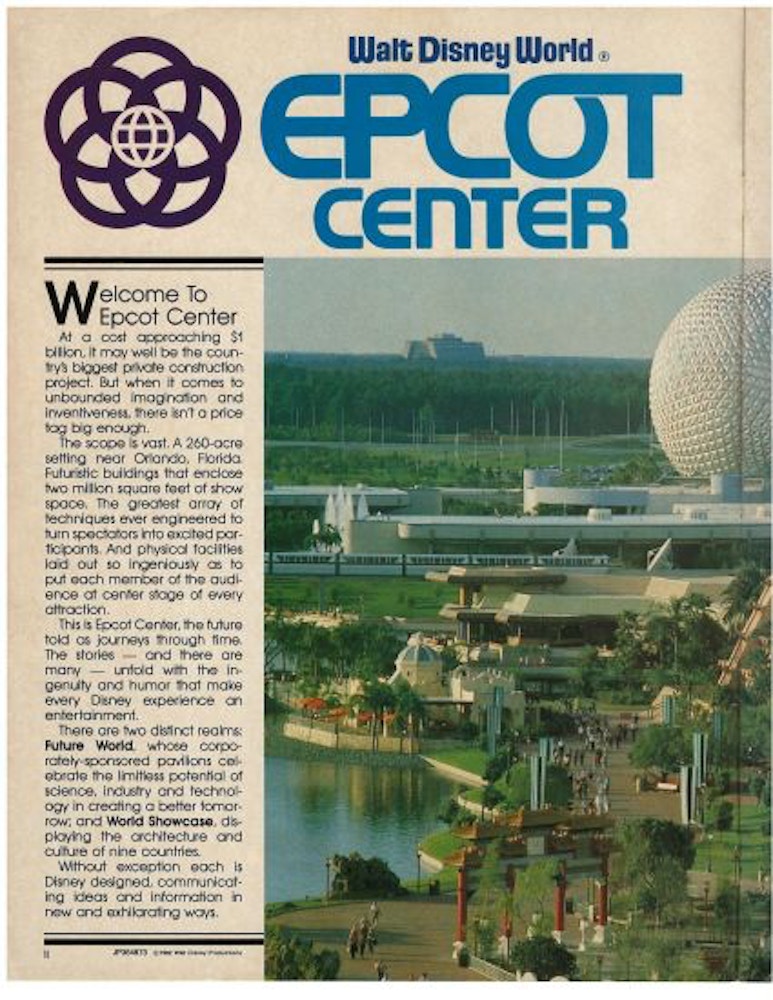 While it may be simple advertising, the language used in these descriptions is beautiful. Here’s just the first page:

“At a cost approaching $1 billion, it may well be the country’s biggest private construction project. But when it comes to unbounded imagination and inventiveness, there isn’t a price tag big enough.

The scope is vast. A 260-acre setting near Orlando, Florida. Futuristic buildings that enclose two million square feet of show space. The greatest array of techniques ever engineered to turn spectators into excited participant. And physical facilities laid out so ingeniously as to put each member of the audience at center stage of every attraction.

This is Epcot Center, the future told as journeys through time. The stories – and there are many – unfold with the ingenuity and humor that make every Disney experience an entertainment.

There are two distinct realms: Future World, whose corporately-sponsored pavilions celebrate the limitless potential of science, industry and technology in creating a better tomorrow; and World Showcase, displaying the architecture and culture of nine countries.

Without exception each is Disney designed, communicating ideas and information in new and exhilarating ways.” 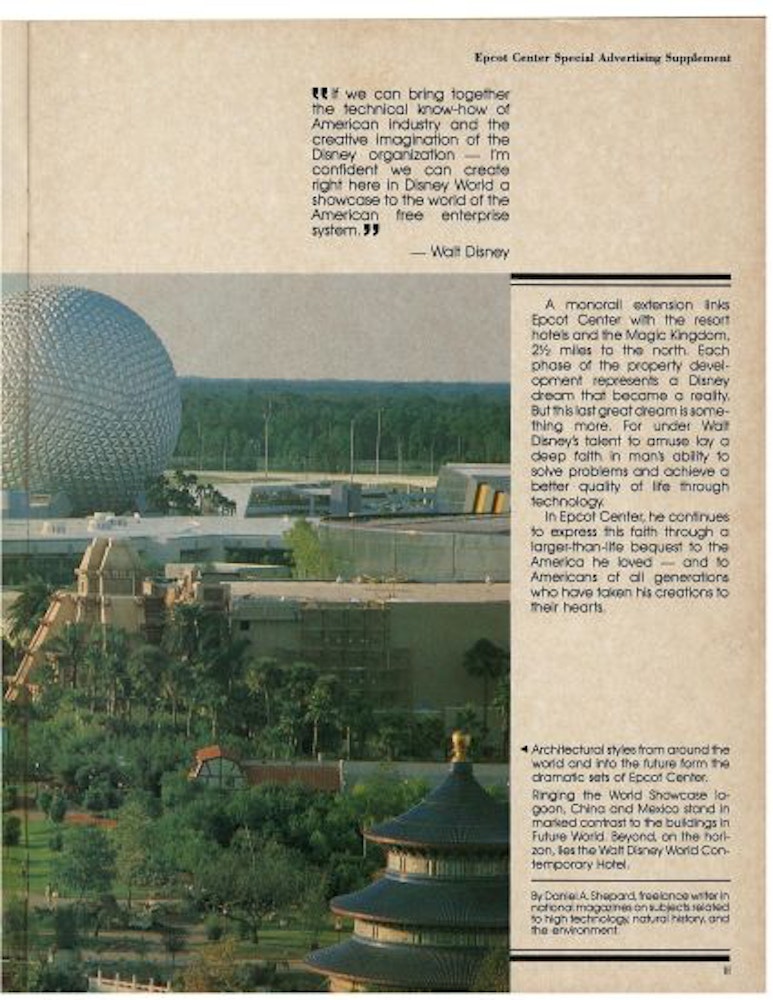 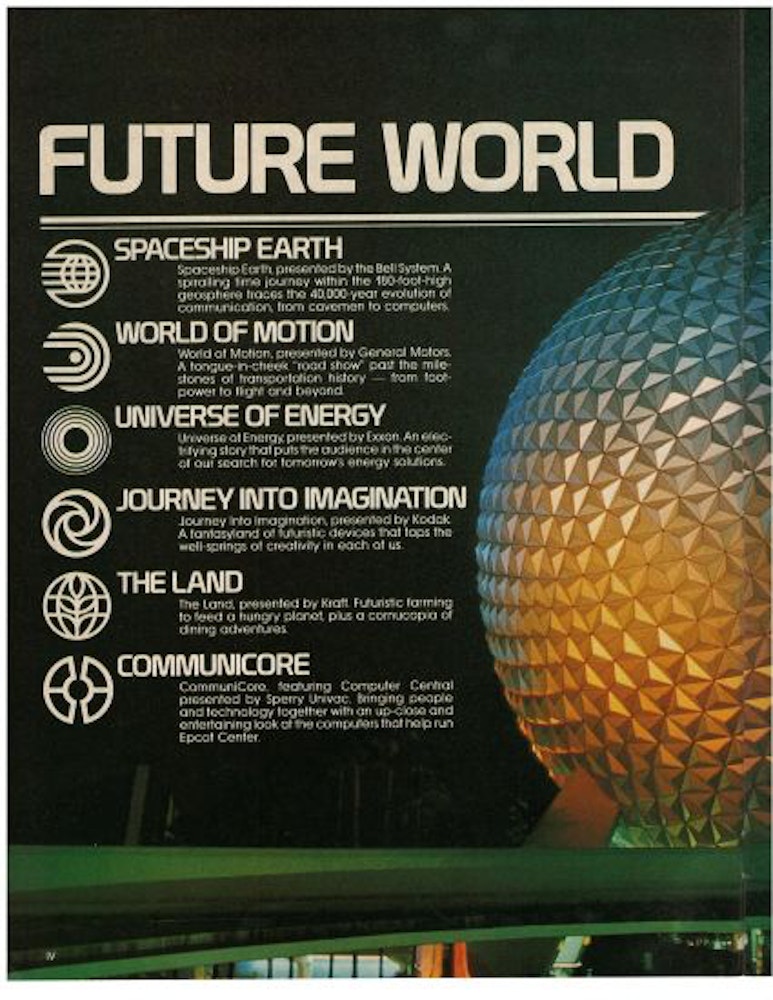 Judging by the listing of Future World pavilions (and the later description of the Journey into Imagination ride), this was likely published in either very late 1982 or early 1983. 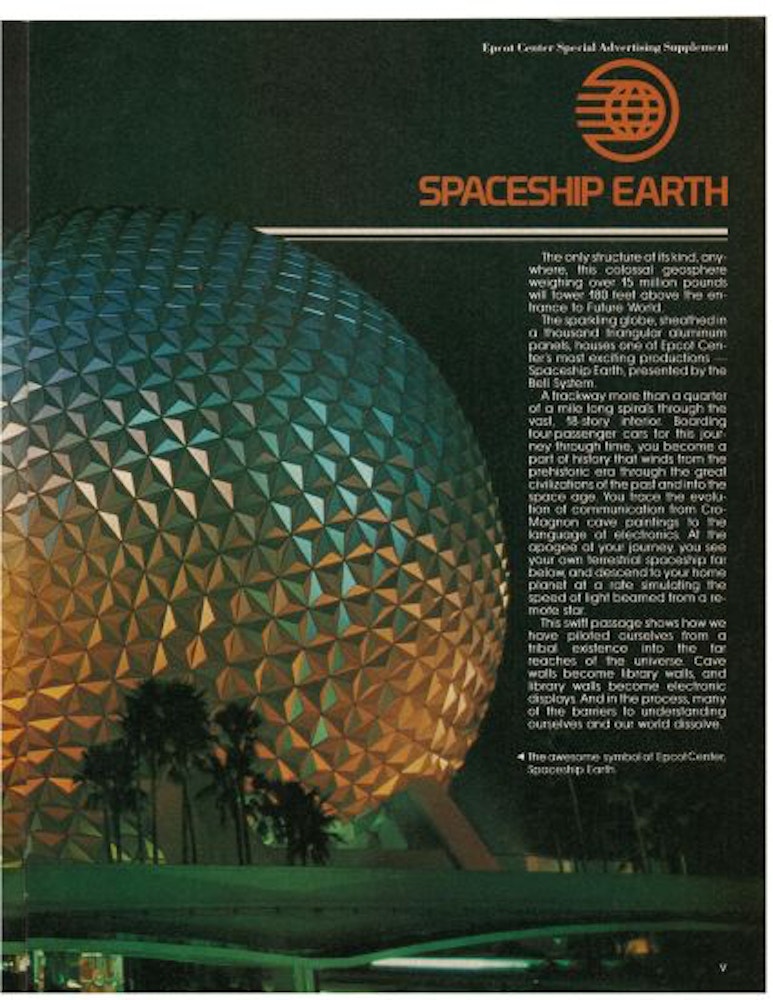 Each Future World pavilion gets their own page and description. Naturally, Spaceship Earth leads off the pack. 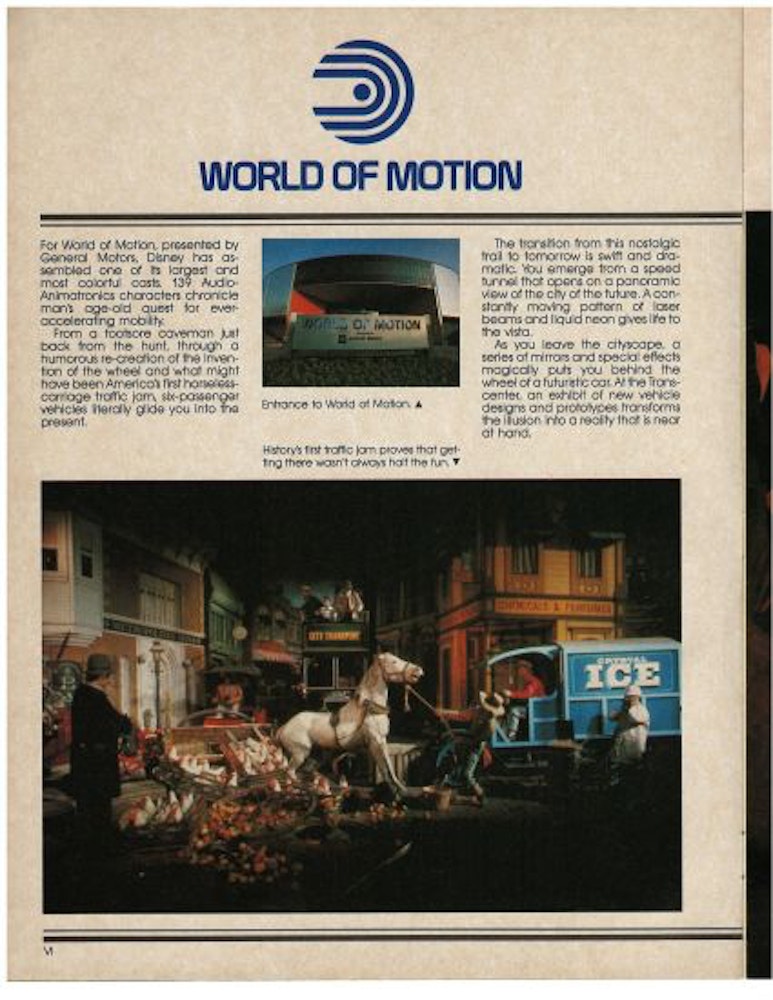 Did you ever ride the attraction that chronicled our “age-old quest for ever-increasing mobility,” World of Motion? 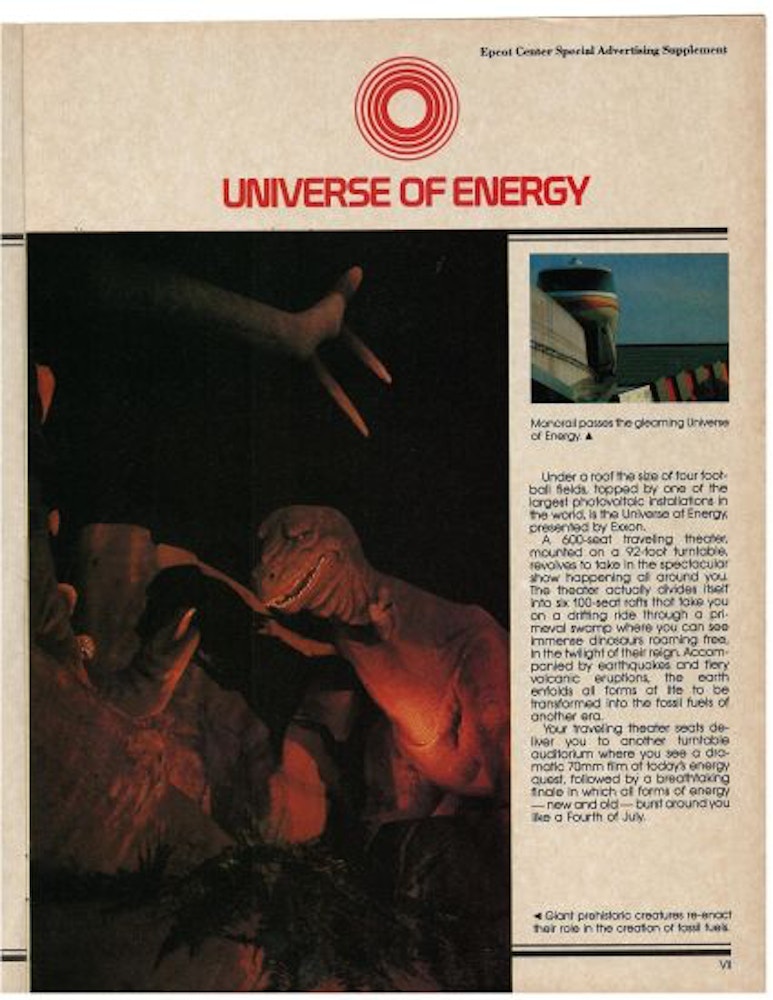 Back then, you could “feel the flow,” if you’d go on the Universe of Energy! 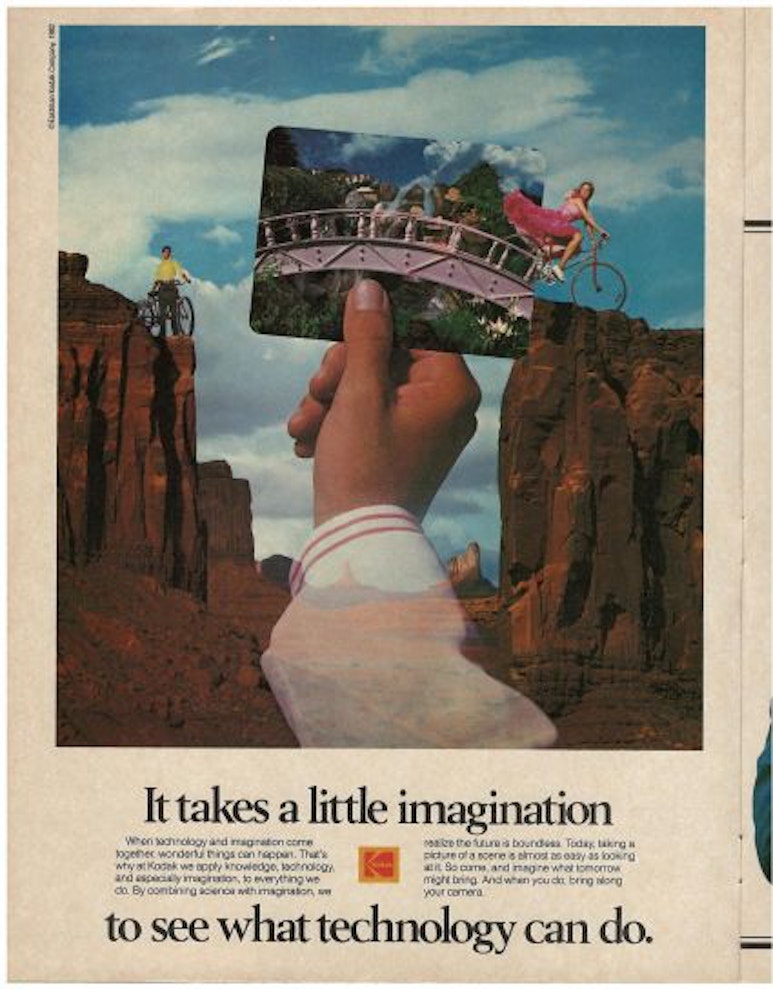 Some pavilion sponsors purchased advertisements within the supplement. With this Kodak ad, can you figure out what pavilion’s coming next? 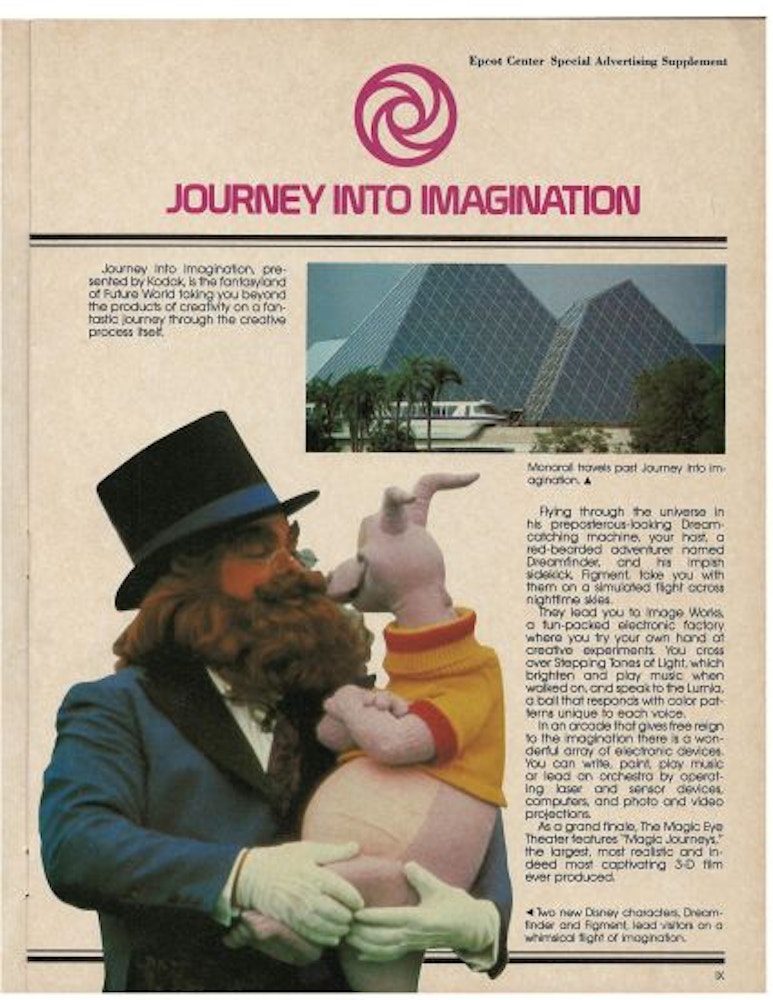 Did you guess Journey into Imagination? (I mean, if you read WDWNT, then you probably knew.) There’s a brief mention of the ride, though there is a possibility this supplement was published prior to its opening. 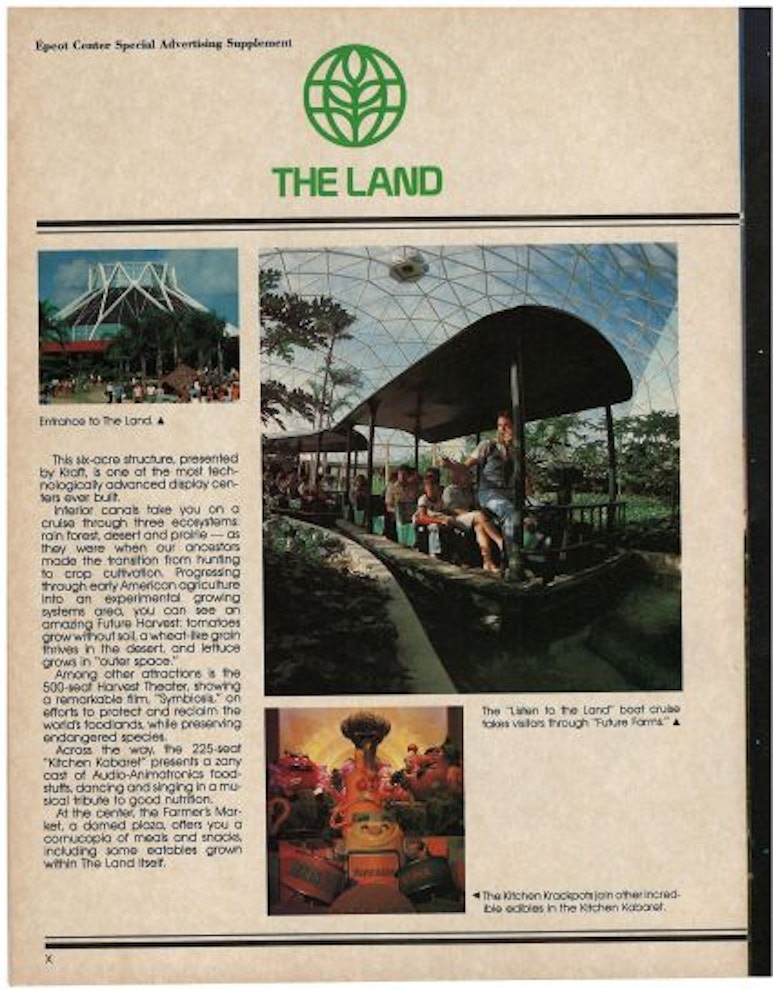 Now it’s time to listen to The Land. 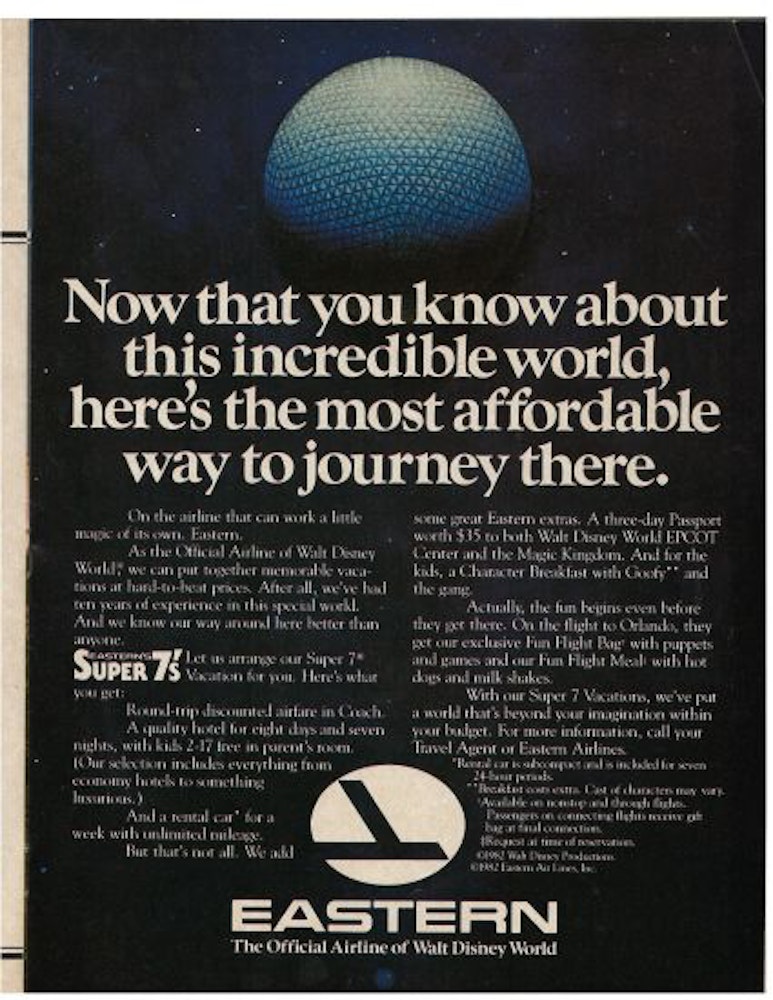 I guess it wouldn’t really be sponsored by Easter Airlines without some sort of advertising. 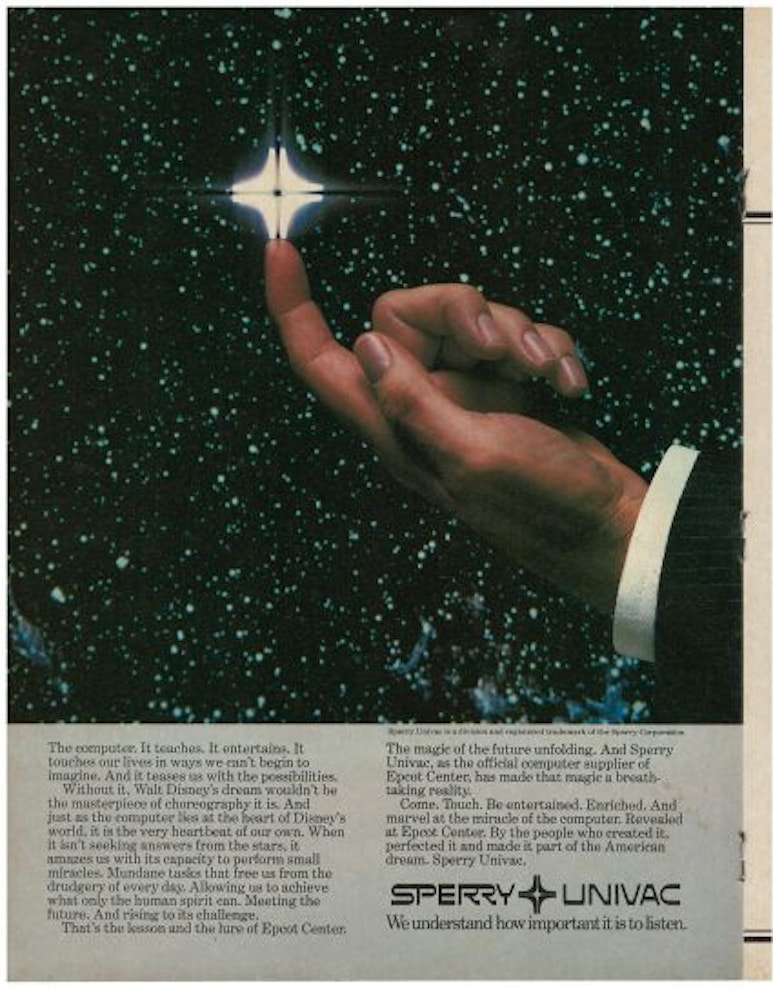 There’s also an ad for Sperry Univac, which was a sponsor of CommuniCore’s Epcot Computer Central. There’s also a neat commercial for the company that was shot at EPCOT Center starring the late Kirk Douglas. 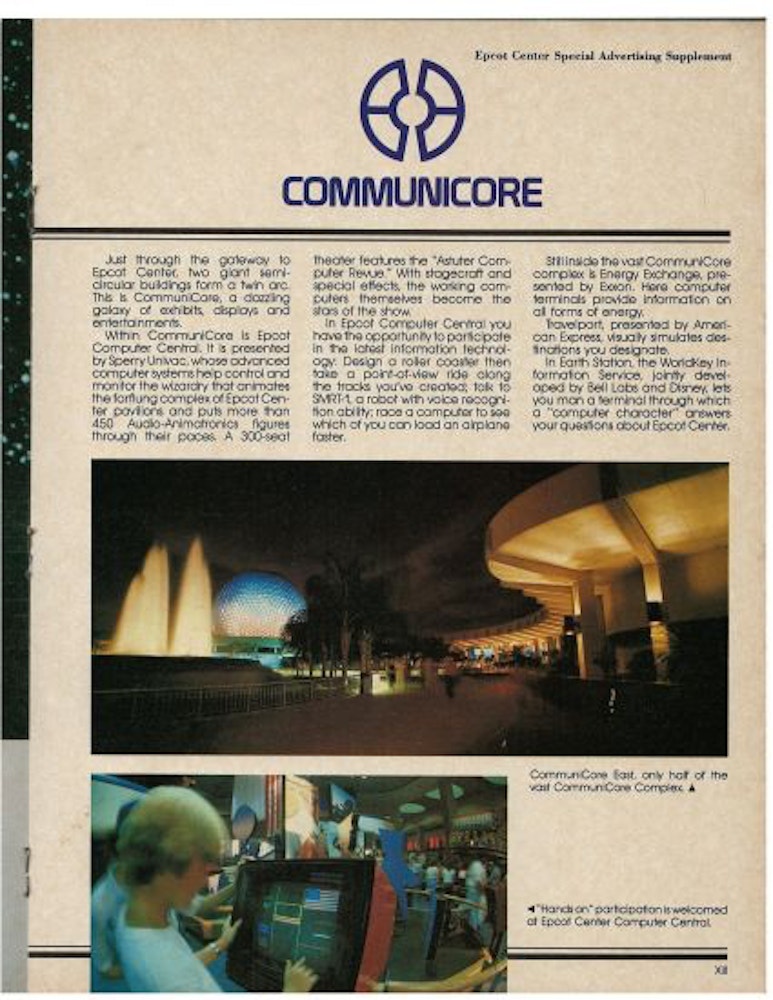 And with Future World complete, we move onto World Showcase. 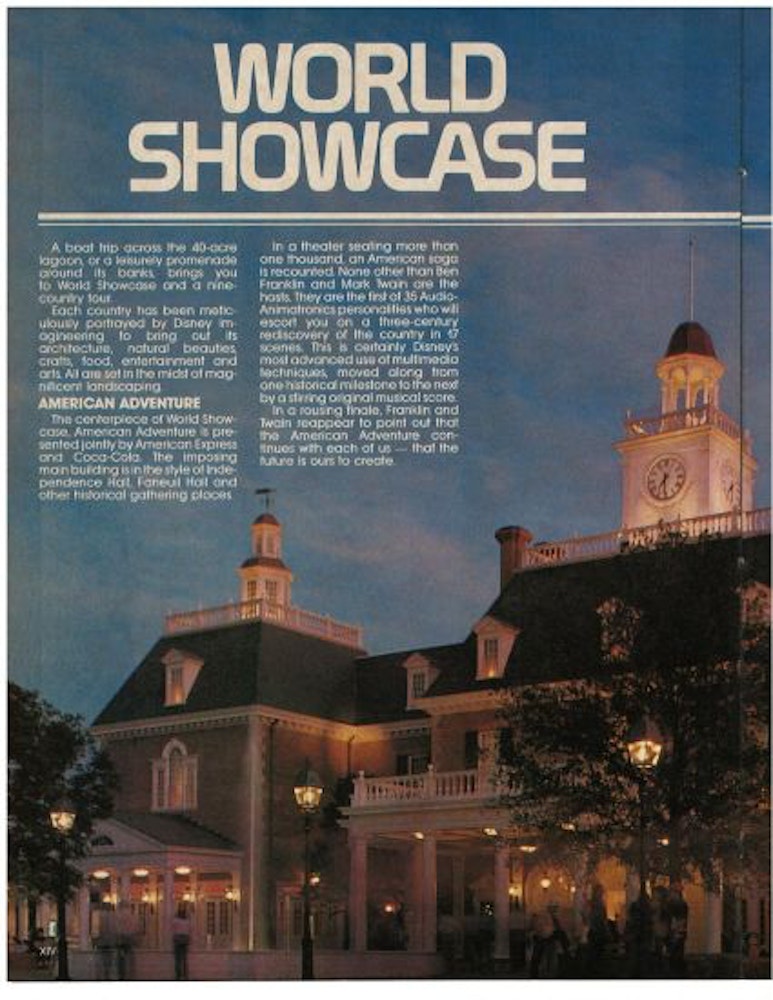 We’re starting from the back, with the centerpiece of World Showcase, The American Adventure. 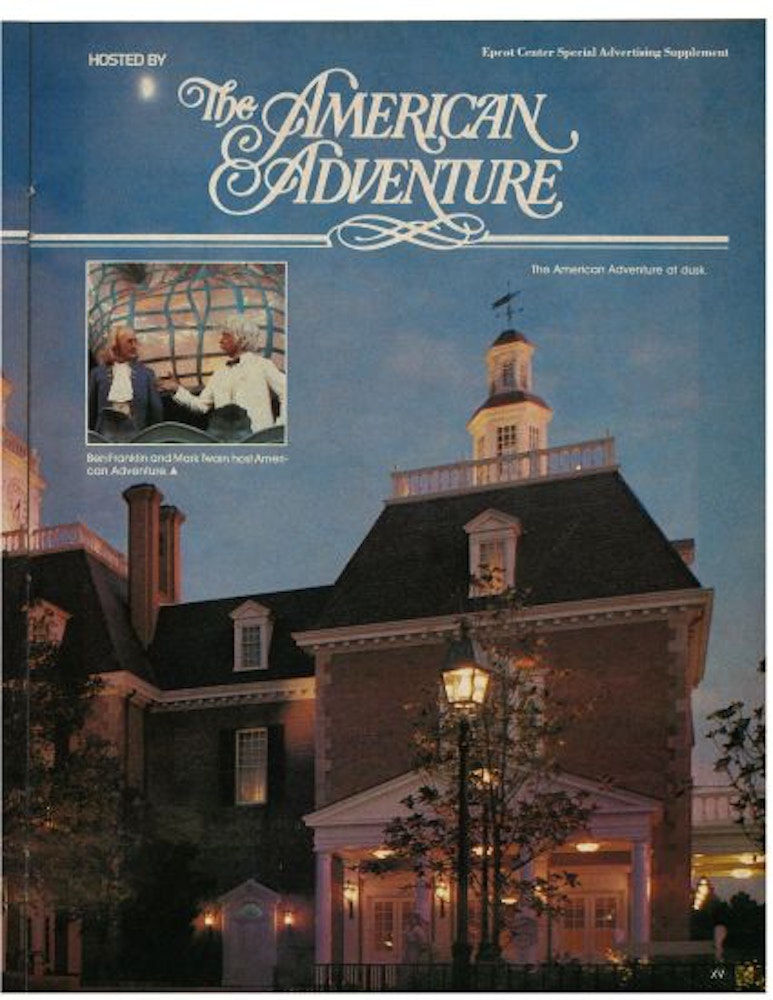 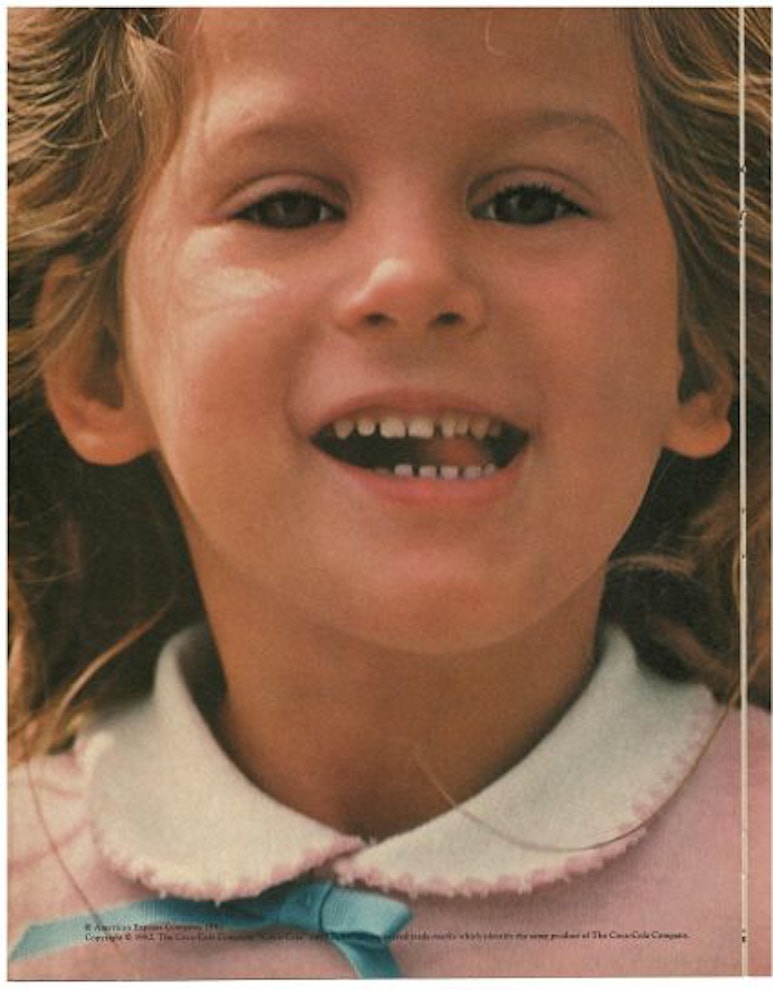 Two titans of industry, The Coca-Cola Company and The American Express Company, took out a two-page ad to show their sponsorship of The American Adventure. Truly, they were the Mark Twain and Benjamin Franklin of business. 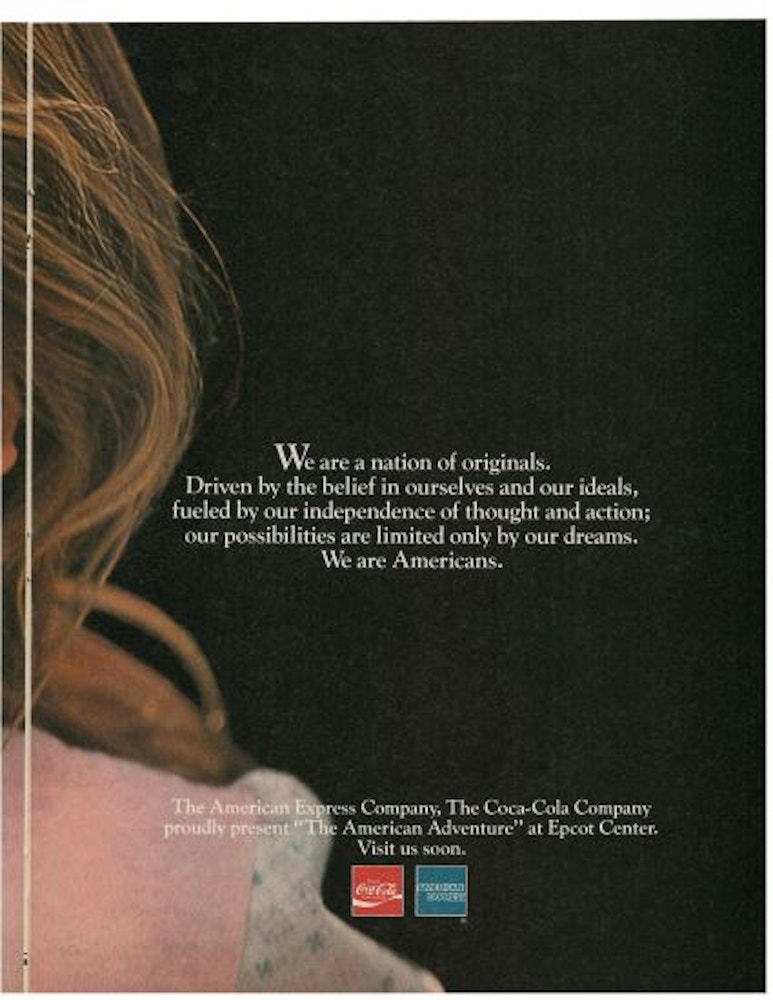 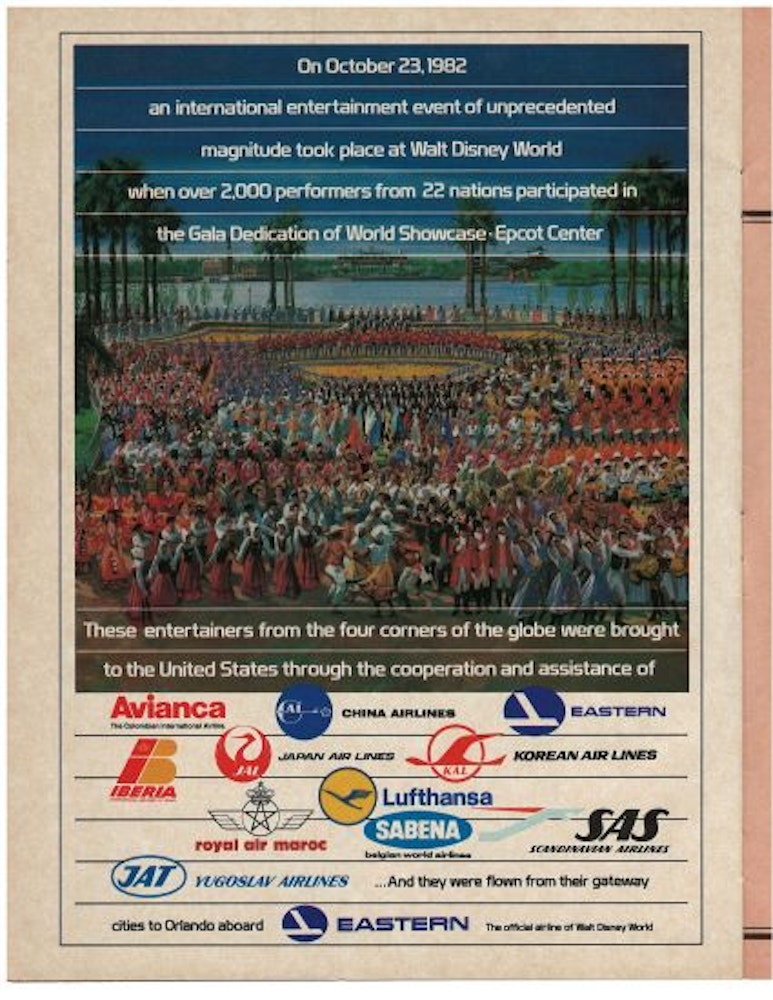 Here’s an ad for several international airlines and as well as Eastern, showing off the roles they played in getting over 2,000 performers from around the world to the official dedication of World Showcase on October 23rd, 1982. 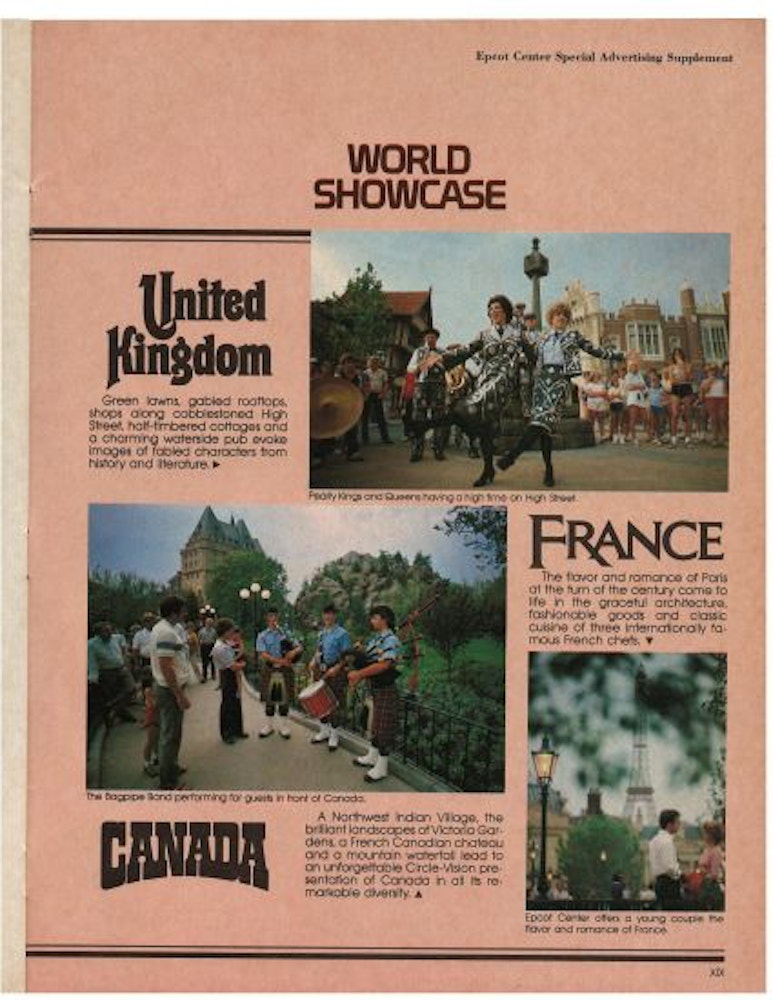 The World Showcase section doesn’t go in any particular order, as here, it shows off the United Kingdom, France, and Canada Pavilions. 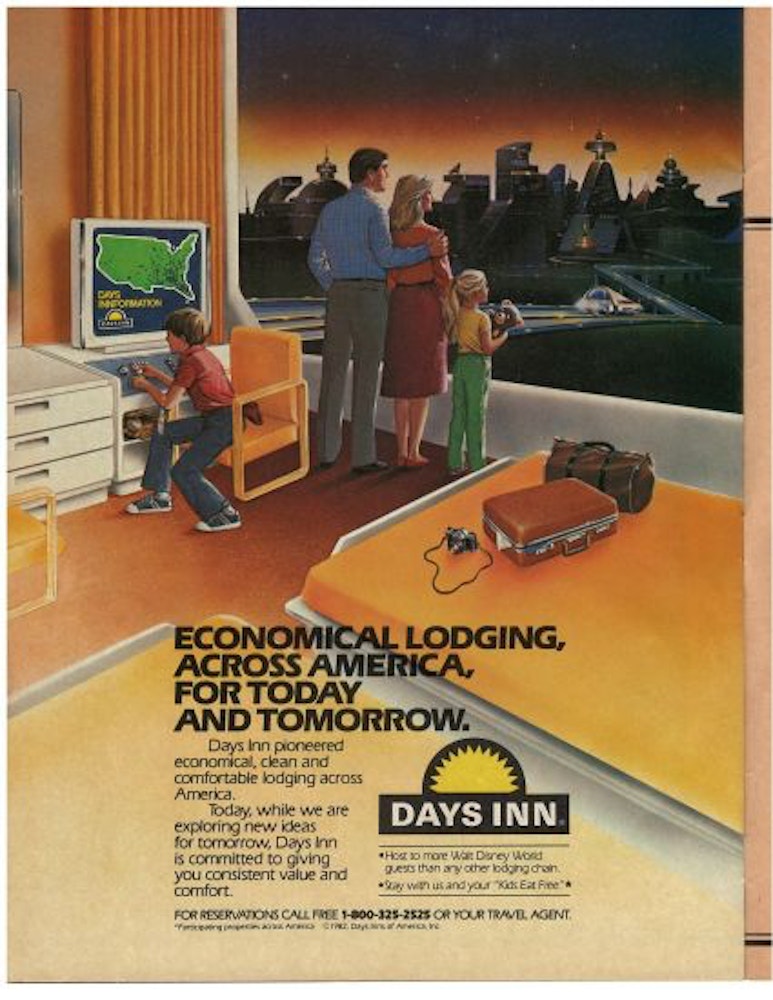 Wow, this actually makes me want to stay at a Days Inn. That is one cool computer! 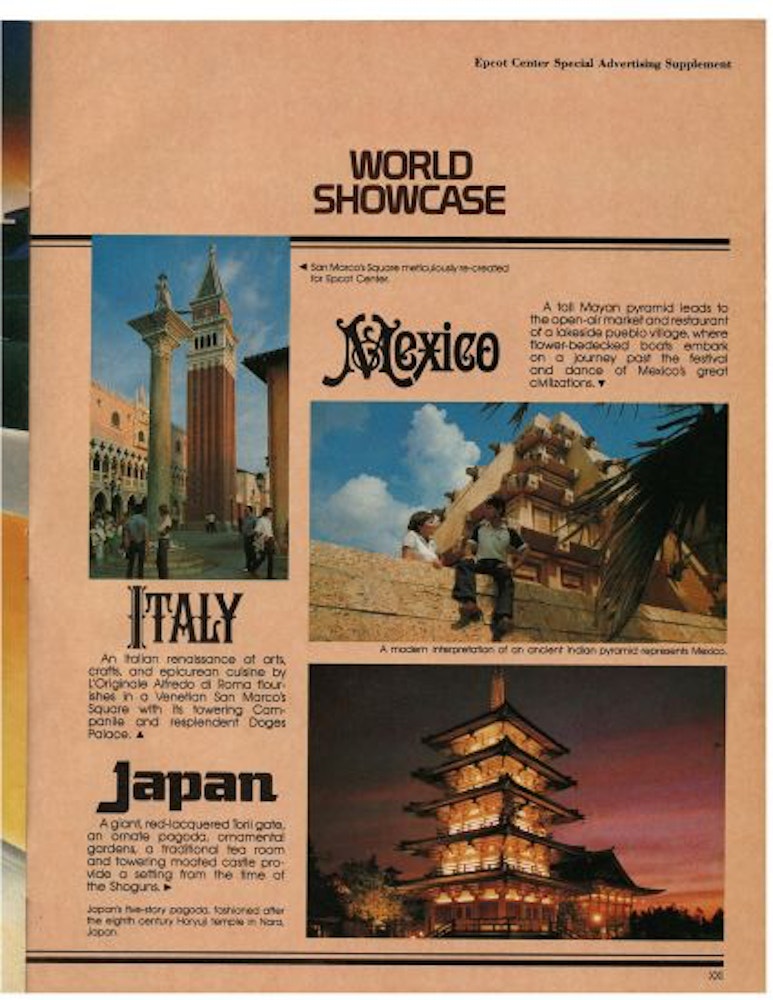 Here’s a look at the Mexico, Italy, and Japan Pavilions. 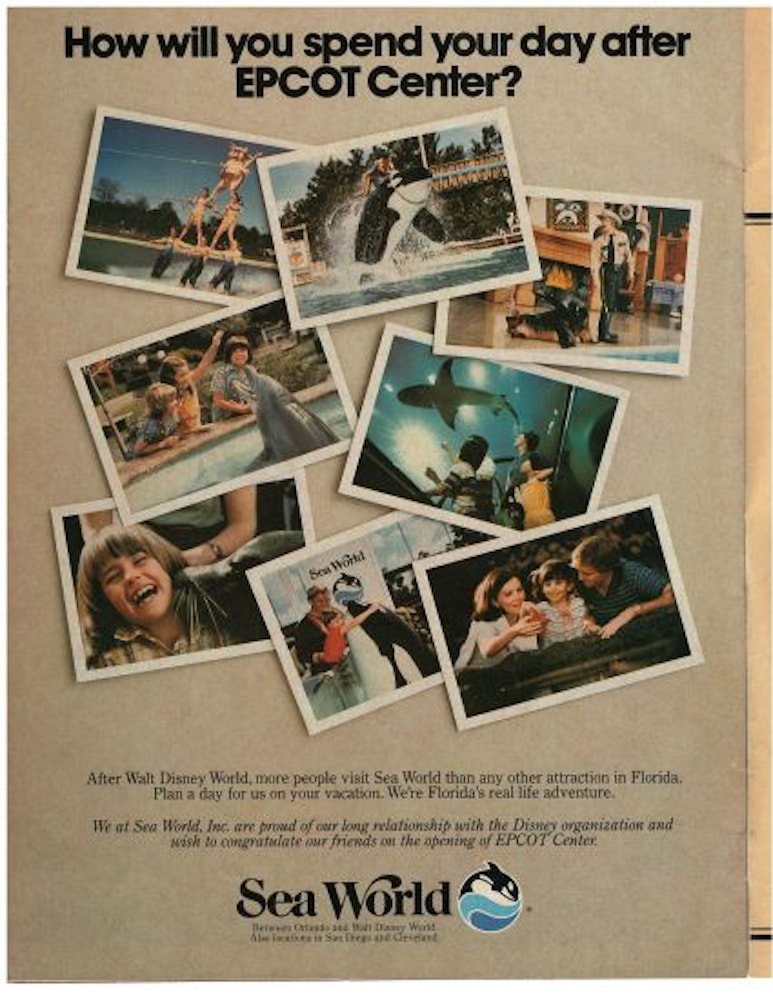 Yes, once upon a time, two of the biggest players in the theme park world were actually on cordial terms. Here, Sea World congratulates Disney on the opening of EPCOT Center. 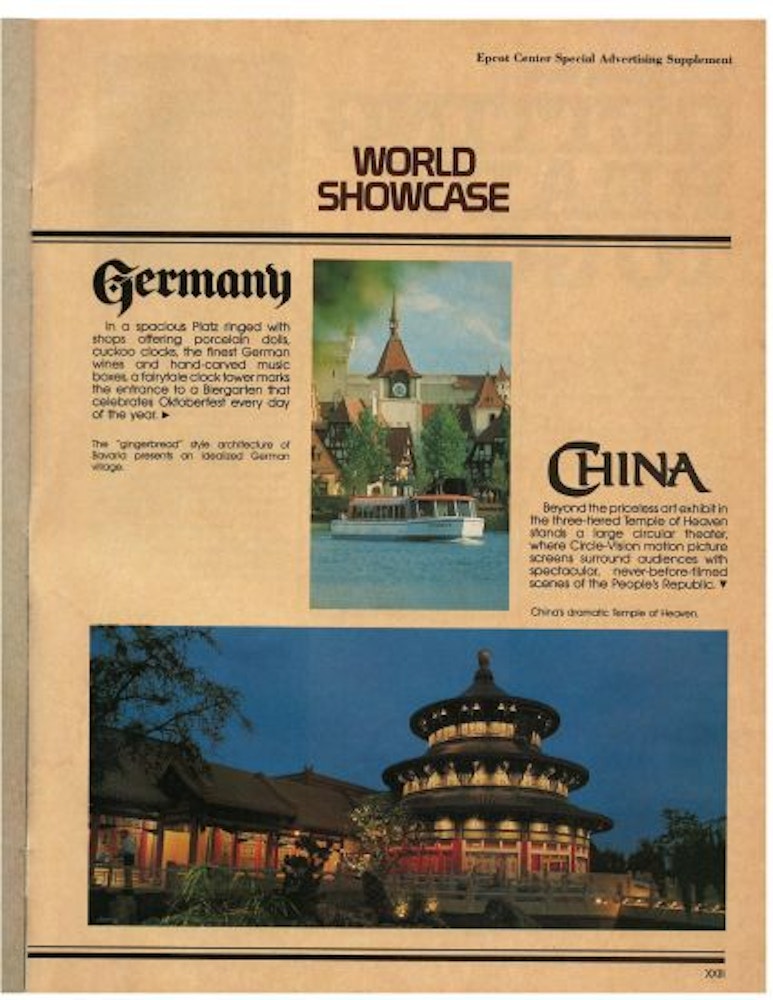 Closing it out is a look at the Germany and China Pavilions. 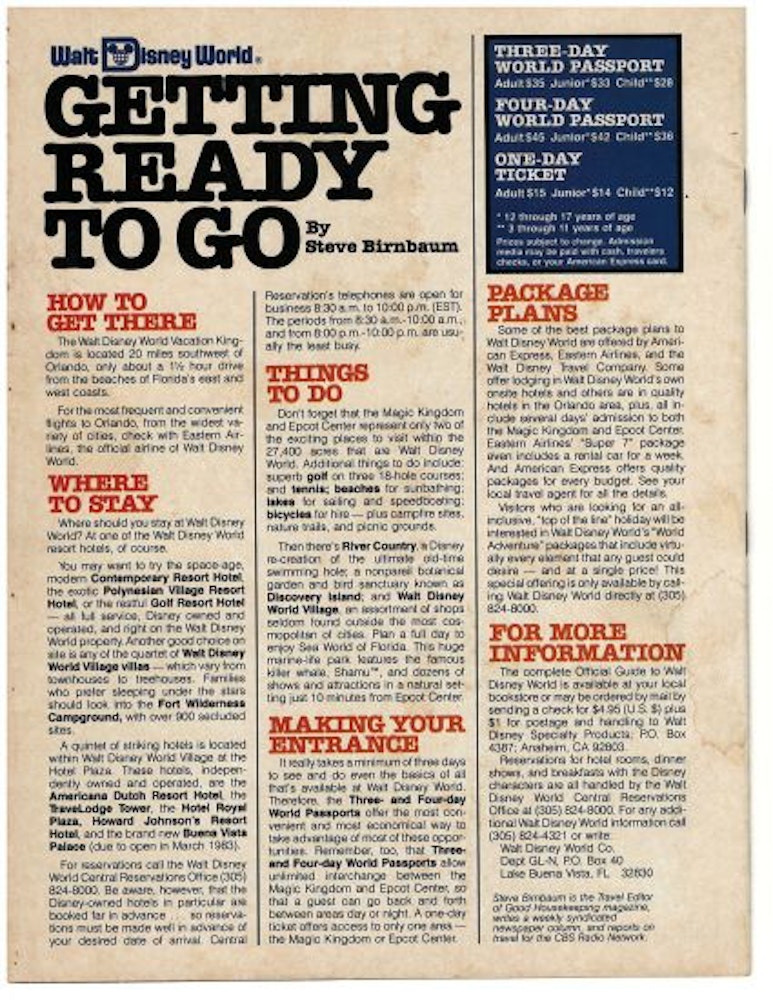 And finally, there’s a full page of information for guests to help plan their visit to Walt Disney World and EPCOT Center. A four-day World Passport for $45? Sign me up!