Editor’s Note: This article was originally published on May 1, 2018.

Welcome to another edition of Tom’s Top 7,  a continuing countdown of my favorite (and occasionally, least favorite) things at the Disney Parks around the globe. Why seven? Because any more and you’ll regret it… maybe not today, maybe not tomorrow, but soon and for the rest of your life. 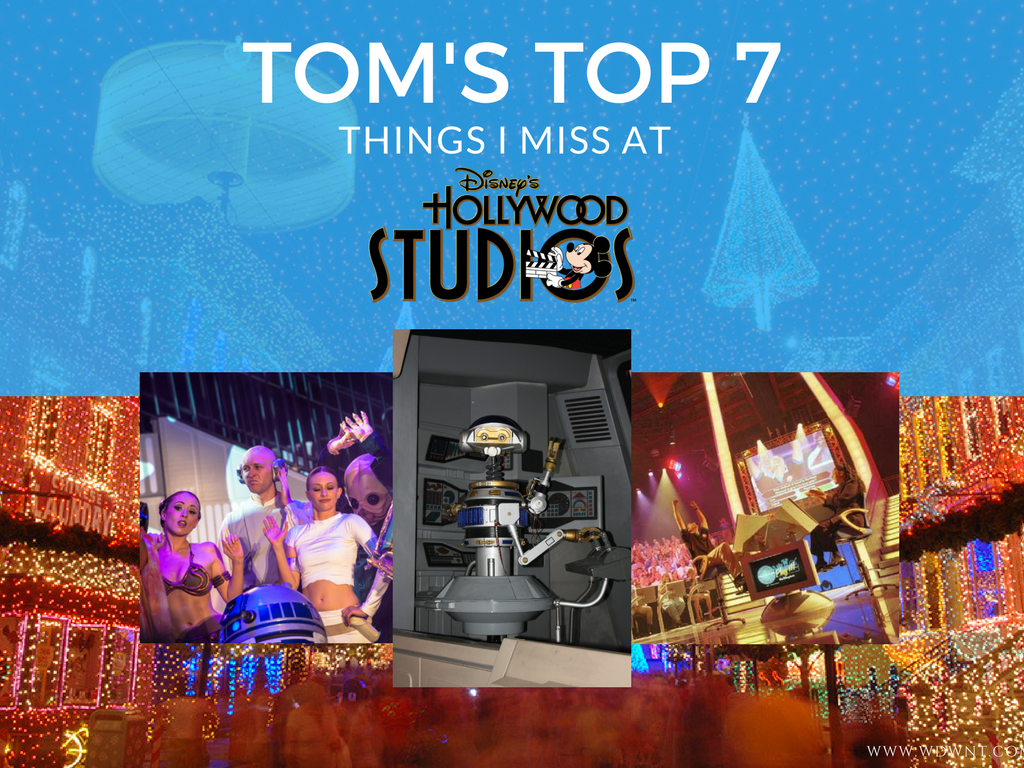 As we celebrate Disney’s Hollywood Studios Appreciation Week here at WDWNT.com, I couldn’t help but get swept up in nostalgia for the park of old, the days of the Disney-MGM Studios, and a theme park that doubled as a working production center. With that being said, I decided to take a look back at my personal most-missed-list of things you can no longer find at Walt Disney World’s third theme park. Here are my Top 7 Things I Miss At Disney’s Hollywood Studios…

Eventually replaced by PIXAR Place and Toy Story Mania, Who Wants to be a Millionaire – Play It! fit the Studios well. It brought the world’s hottest game show to the parks and allowed guests a viable shot of being in the “hot seat”, and even if they didn’t make it there, they could play along in the studio audience.

One of and arguably the most famous park icon of the Disney-MGM Studios was the Earfful Tower. The 130-foot tower was located in the Studio Backlot Tour backstage area of the park. Originally sporting the Disney-MGM Studios logo, it was altered to reflect the park’s name change in 2008. The Earffel Tower was reinstated as the park’s icon for a bit after the removal of the Sorcerer’s Hat in 2015, but it would be short lived. The tower was removed on April 29, 2016 to facilitate the construction of the park’s Toy Story Land. Its condition and whereabouts are unknown.

The centerpiece of the park that tied everything together thematically, I’m not sure anyone ever thought this attraction would be removed. It would be akin to removing the ride inside of Spaceship Earth at Epcot and replacing it with something nonsensical, like, I don’t know, a roller coaster, right?

The Great Movie Ride’s closing came suddenly, shuttering only a month after Mickey and Minnie’s Runaway Railway was announced at the 2017 D23 Expo. While Disney unmercifully took this classic away from us (the same day as the Universe of Energy as well, just to be extra mean), it did provide a life highlight for me when WDWNT.com rented out the attraction for a spectacular farewell party just days before it left us forever. Being able to host an event that was a proper farewell for so many fans is something I’m not sure I’ll ever be able to top.

Despite many losses in the years leading up to this, the end of the Great Movie Ride is the definitive moment when the park that opened in 1989 died. Whether or not that is a good thing, only time will tell, but I’ll never be over losing this “Spectacular Journey into the Movies”.

While overall there were things I didn’t like about it (insane lines to get autographs, merchandise, and park overcrowding), I can’t deny that I have some amazing memories of Star Wars Weekends. Offered periodically at first, the event became an annual tradition in the mid-2000’s and a reason for many Star Wars fans to book a trip to Walt Disney World every Spring. Some of the highlights for me were the Celebrity Motorcade, A Conversation with Mark Hamill in 2014, and the Stormtrooper pre-shows (luckily, all of which I filmed and can share with you below).

Almost deserving of its own spot on this list was the Hyperspace Hoopla, where Star Wars stars danced-off against each other in a theme park comedy masterpiece. Lucasfilm mandated the show be removed after the 2013 event, and has since also eliminated any Disney characters in Star Wars character clothing.

An opening day attraction, the Studio Backlot Tour was a half-day experience that slowly was cut away to about a half an hour over 25 years. While I lament the loss of the original tour, I didn’t care much for the final version of the attraction. That being said, my final ride was an emotional one, saying goodbye to the trams, Catastrophe Canyon, the special effects tank, Walt’s airplane, and more of the remaining shell of what once made for a memorable experience. Without Residential Street and actual production to see, it wasn’t much of anything, but it was the last vestige of the “working studio theme park”.

I love Star Tours: The Adventures Continue, but the original Star Tours will always hold a very special place in my heart. While it was incredibly dated by the end of its run, it was undoubtedly a classic that changed theme parks forever. I owe this attraction my Star Wars fandom as I actually rode this ride before I had ever seen a Star Wars movie. I loved the attraction so much that my dad took me to Blockbuster when we got home from vacation and bought me the VHS boxed set of the original trilogy. Kids, ask your parents what Blockbuster and VHS are.

I know this one still looms heavy in the hearts of many, myself included. The Osborne Lights were a staple of the Studios before they ever danced, but once the display moved to Streets of America and was synchronized to music, it became an indelible piece of Walt Disney World history. It was everything the holidays at the parks should be: larger than life, covered in lights, a display of cutting edge technology, all while still being incredibly heartwarming. Will they ever return to Walt Disney World? With the amount of money being left on the table by not offering this, I can’t imagine a Walt Disney World theme park won’t someday host the lights one more time.

Sadly, the display was a victim of where it was. The only thing that made the display possible was a large, mostly underutilized empty street towards the back of Disney’s Hollywood Studios. Not to defend Disney, but there is nowhere that logistically could make this work today. Disney Springs would be overcrowded as the offering would be made free, no resort hotel has the parking area large enough, and no park currently has a space that could handle it. The only hope I see is a custom built area that is an expansion of a park, otherwise the Osborne lights will likely never return to Disney World.

“Sorry folks, it was my first flight and I’m still getting used to my programming!” – Captain RX-24 (Rex)

While these offering can not be seen anymore at Walt Disney World, an exciting future awaits Disney’s Hollywood Studios. However, that doesn’t mean we can’t have a little nostalgia for what was.

What do you think? Which of these was your favorite? Is there something else from the Studios that you miss? Let me know in the comments below.