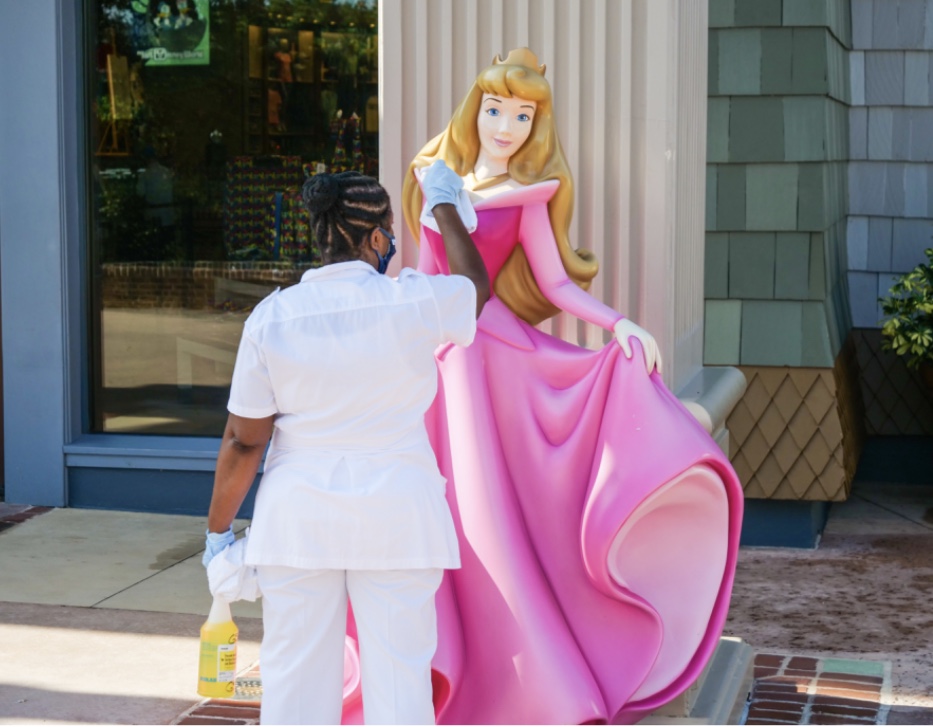 Welcome to another exciting day at Disney Springs! It’s day 3 with World of Disney and other Disney-owned outlets open, and day 10 for Disney Springs as a whole (not that we’re counting). We’ve got a handful of new restaurant and retail openings, as well as some new merchandise, to cover. Let’s head on in!

If you have any plans to shop for Disney merchandise during your visit, World of Disney should probably be your first stop – the morning is the time that you’re most likely to get in without a wait.

Inside World of Disney, which just reopened on Wednesday, there were very few other guests to compete with for the merchandise we’ve longed for over the last two months.

Other parts of the store were similarly deserted. This is a result of the low morning crowds, but the newly-implemented capacity limits will prevent the common swarms of humanity during pre-Covid times.

The many sections and aisles of World of Disney can create a bit of a disorganized shopping experience. Thankfully, we have a walk-through video tour available to help you navigate.

While few guests were in the store, there was plenty of merchandise. One fun find is this open edition The Lion King pin featuring Simba’s likeness, which can be had for $9.99.

Another recent addition is a second style of “The Child” (better known as “Baby Yoda”) hat. The first style was released back in February at Disney’s Hollywood Studios and quickly sold out. What a difference three months makes.

The new variation has a slightly different Baby Yoda design, focusing more on the fan-favorite character’s head (and less on the body). Perhaps The Child put on a few pounds during quarantine like the rest of us.

We also found this throwback Pleasure Island hat, which will pair nicely with the t-shirt that’s also available at World of Disney.

Outside of World of Disney, Cast Members are keeping up with meticulous new cleaning routines, including the models of princesses on either side of one of the exits.

Continuing on the merchandise front, today marked the first day of operation for Sephora since the extended closure began. Naturally, we put together a full post detailing their opening and operational changes.

In addition to the social distancing that is now commonplace, Sephora will also be selling masks in the immediate future. They’ll set you back $10, with $5 of that going to their charity.

While we’re on the topic of masks, here are Vera Bradley’s styles for the day. These tend to change on a daily basis, and at least one style will often sell out during the day.

Shore is now selling masks as well – their styles come in a pack of three and run $30 for the set. The styles will vary by pack, but the staff was more than happy to show the different combinations available.

Moving on to construction, a crew of workers were present at the “Shine Bar + Social” patio bar at Chef Art Smith’s Homecomin’, working diligently to move the project closer to completion.

Meanwhile, at City Works Eatery & Pour House, construction workers are actively building the canopy structure which will soon provide cover to guests – once the restaurant reopens, that is. We’re hoping it happens soon, especially so we can get another taste of the excellent brunch that we reviewed before the extended closure.

Despite the few eateries that are currently under construction (let us not forget that Chicken Guy is silently expanding behind closed doors), a few others debuted today! First off, two full-service restaurants opened their doors again.

First up, Paddlefish reopened in its signature paddleboat structure on the water. Naturally, we have a full post on the opening – click here to view it.

Next door, Terralina also reopened to diners. Similar to Paddlefish, parties are limited to 8 or less guests. Unlike Paddlefish, however, Terralina is bringing along an outdoor bar to the Disney Springs party. The bar will only serve to-go drinks, with seating unavailable in the area.

Last, but certainly not least, everyone’s favorite purveyor of sweet treats – Sprinkles – has made their triumphant return. While guests are not allowed inside their Town Center location, the signature Cupcake ATM remains an option. For more details on Sprinkles’ reopening, including their weekend giveaways, check out our complete post.

Nearby, First Order Stormtroopers kept a close watch on guests and their cupcakes. They monitored social distancing and mask usage, as well as trading some witty banter.

Construction on lululemon’s new location (or maybe a really small Death Star – those Stormtroopers must be coming from somewhere) seems to be progressing steadily. Construction noise can be heard from behind the walls on a daily basis for the “Summer 2020” opening.

On the West Side, crowds are generally pretty light. With little more than Pelé Soccer and Sosa Family Cigars open on that end of the Springs, the area sees little traffic.

Elsewhere, crowds were a bit more steady. Certainly nothing comparable to pre-closure levels, but as days continue to pass – and more businesses open – Disney Springs as a whole sees additional guests.

As we progress through the day, the areas around World of Disney tend to be the busiest. Balloons are being sold nearby, though it’s not quite the same as carrying one down Main Street.

By the early afternoon, Chicken Guy had built up a pretty serious line. This is no surprise, however, as the fan-favorite restaurant has been consistently busy since it reopened on May 20th.

Finally, we wrapped up our day right where we started – at the entrance to World of Disney. There was still no wait to enter the monstrous merchandise mine, however we’re seeing crowds pick up later in the day on weekdays – no different from the pre-closure days.

Thanks for joining us as we discovered all of the new restaurants, stores, and merchandise around Disney Springs today! If you enjoy our photo reports – and photos in general – click here and follow us on Instagram.