While construction has come to a halt at all domestic Disney Parks, overseas in Hong Kong Disneyland, work continues on transforming their castle into the Castle of Magical Dreams. We were last able to check in on the progress of the castle transformation in late April. Now, thanks to our friends at Disney Magical Kingdom Blog, we have a look at the latest additions.

As part of its multi-year transformation, Hong Kong Disneyland’s iconic Sleeping Beauty Castle is becoming the Castle of Magical Dreams. The newly-reimagined Castle will stand as a shining beacon of courage, hope, and possibility, drawing inspiration from 13 beloved Disney stories featuring princesses and heroines. Despite the park closure, work is still visible by the park entrance. Cranes can be seen towering next to the newly-revealed turrets and towers. 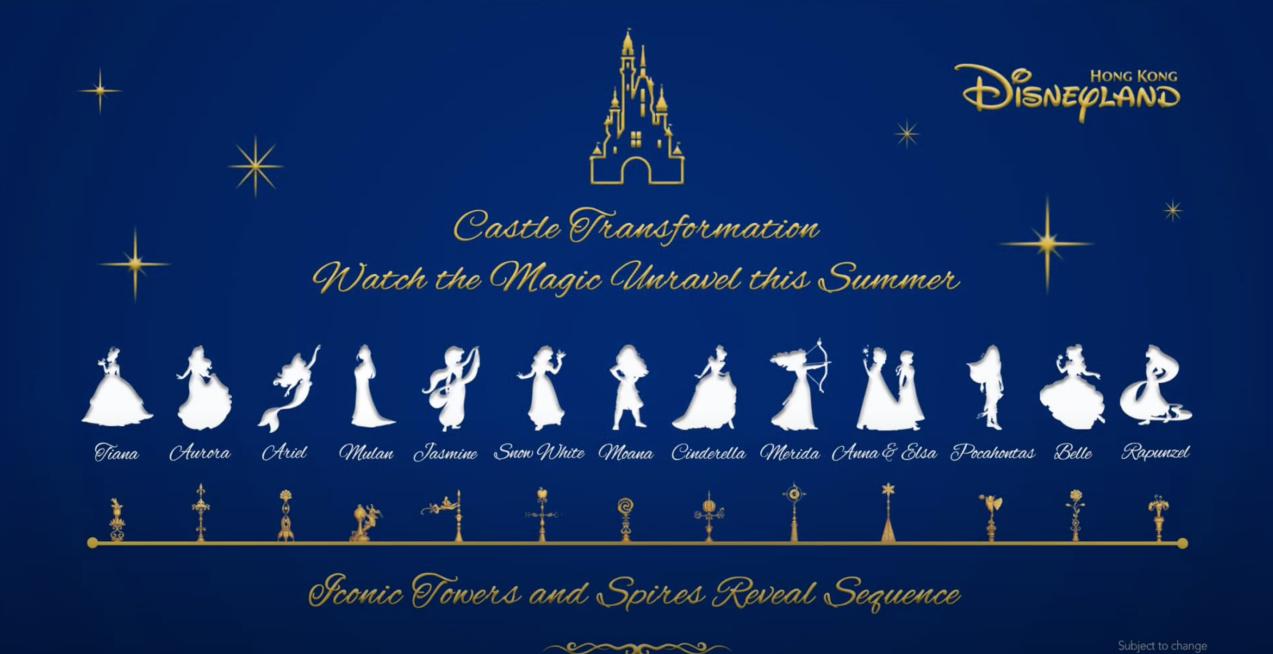 Here’s a visual guide to each princess-themed spire. Princesses such as Tiana, Aurora, Ariel, Mulan, Jasmine, Snow White, Moana, Cinderella, Merida, Pocahontas, Belle, Rapunzel – along with Anna and Elsa from Disney’s Frozen – will all have their moment to shine on this castle.

Here’s a head-on look at the front of the castle, with its deep blue stained glass windows and tall central tower. Based off concept art for the castle transformation, the blue hues of the stained glass will glow alongside each illuminated spire.

In today’s update, we have a special look at the illuminated tower with its elegant light blue hue.

Work continues on the domed glass building of the Merida-themed Brave tower.

The teal and purple tower is themed after The Little Mermaid. If you take a look at the spire on the far left, you can see the swirl from the Heart of Te Fiti––that’s that Moana tower.

You can take a full 4K tour of the latest construction update on the Castle of Magical Dreams at Hong Kong Disneyland by checking out the video below from Disney Magical Kingdom Blog: