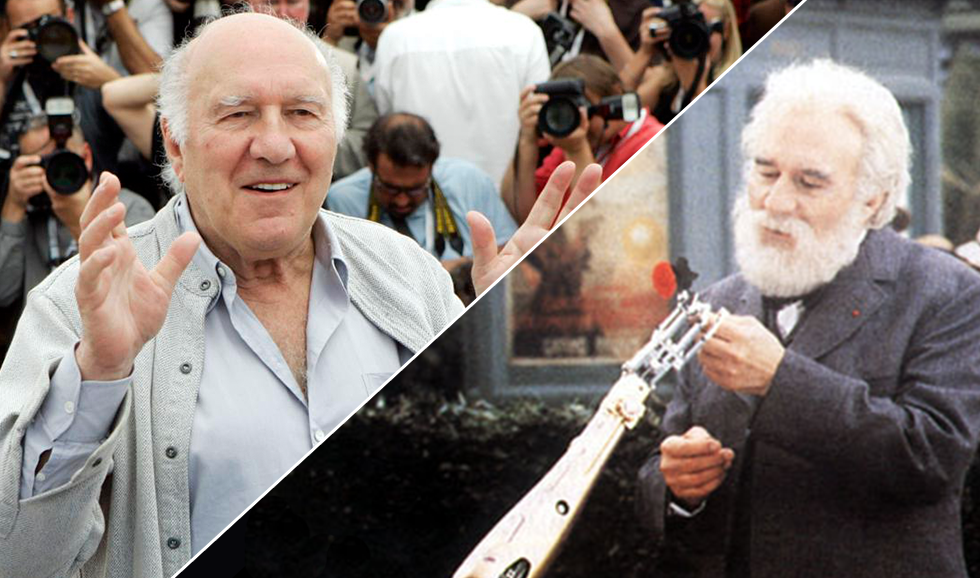 EXCLUSIVE: Director Jeff Blyth Remembers Michel Piccoli and the Making of “The Timekeeper”

As we reported earlier today, famed French actor Michel Piccoli, known to Disney park fans as Jules Verne in the Circle-Vision 360 presentation “The Timekeeper” or “Le Visionarium,” has passed away at the age of 94.

Filmmaker Jeff Blyth, who directed Piccoli in “The Timekeeper,” spoke to WDWNT about his experience working with the French acting legend.

“I first met Michel Piccoli at the Café de la Paix, near the Opéra Garnier in Paris. He’d just been cast for the main role in a film I was directing for what was then called EuroDisneyland.

Piccoli was taller than I’d expected from his many movies, with an almost magisterial stature. Perfect for the equally outsized character of Jules Verne, a French national hero. But I found Michel to be humble and earnest about our little film, despite his already appearing in many classics of cinema.

We communicated in my limited French and his limited English. I think what sealed the deal was my love for an old film in which he played a small but key part. This was more than a “Weren’t you in..?” moment. I vividly recalled behaviors and actions of his character from his few scenes from “The Sleeping Car Murders” by Costa-Gavras. Michel became animated, like he was reliving the character from the film of 30 years earlier.”

It wasn’t until we were ready to begin production of “From Time to Time” that Michel showed his true enthusiasm for the role of Jules Verne. He made it clear he didn’t want a stunt double, despite the film’s premise of transporting Verne into our modern times and onto the nose of a speeding TGV, underwater in a glass bubble submersible, hanging out of a helicopter over Mont Saint-Michel, and more. He told me that was why he took the role, to do all of those stunts himself, as if to prove to his children (and maybe himself) that he was still had a lot of life left in him, even in his mid-sixties.

Perhaps my worst fears as director was the day we filmed near the Arc de Triomphe with Jules Verne naively wandering out into automobile traffic with child-like wonder. He walks right towards a swarm of onrushing cars, then turns his back on them as they screech to a stop or swerve to avoid him.

We worked with famed stunt coordinator Rémy Juliénne who controlled a total of 40 of his cars and drivers. Remy and I were crouched down under the 360-degree Circle-Vision cameras while one of Remy’s son’s was tasked with skidding the lead car sideways and stopping mere inches behind Michel. The problem, which Remy informed me as we were about to shoot, was the streets in that area were cobblestone and the tires had a hard time getting a grip. Now you tell me?

And sitting as extras on a public bench were Michel’s wife Ludevine and his young kids, acting as if they didn’t know what was going to happen. We did the stunt three times that day, each time Remy’s son braked his careening automobile closer and closer. Michel played the scene with his back to the cars, not showing a trace of fear. After three complete takes, I finally said that was it. I couldn’t take any more chances. But through it all, Michel Piccoli was acting just like Jules Verne, an innocent who wanted to experience everything in this new world.”

Thanks to Jeff Blyth for his reminiscing on the great late Michel Piccoli.

If you want to know more about Jeff’s circle-vision career for Disney, check out a full interview he did on our Disney culture podcast, “Dreamfinders.” If you haven’t watched “The Timekeeper,” enjoy Piccoli’s performance along with voice-work by Robin Williams and Rhea Perlman and a cameo of Jeremy Irons as H.G. Wells:

Next
Disney Springs Releases Frequently Asked Questions (and Answers) on Masks, Parking, Dining Reservations, and More Ahead of May 20 Reopening