Whether you’re a proud Universal Orlando Passholder, or you simply have one for your yearly Halloween Horror Nights pilgrimage, it’s going to come in extra handy in the following weeks.

Universal has announced that Passholders will be invited to be among the very first to come enjoy the reopening of Universal Studios Florida, Universal’s Islands of Adventure, and Universal’s Volcano Bay before they open to the general public on June 5. 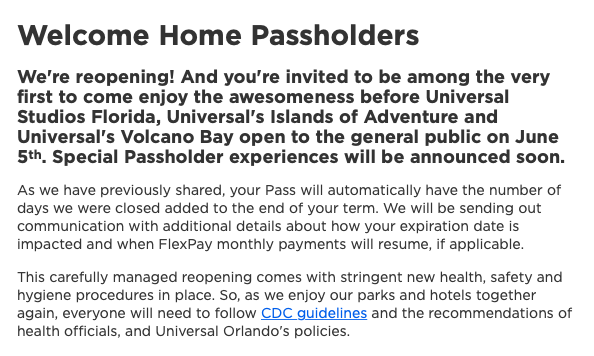 In an email to Passholders, Universal Orlando indicated that these special Passholder experiences will be announced soon.

Universal Orlando was among the first major theme parks to freeze all passholder payments. All passes will automatically have the number of days the parks were closed added to the end of each term. Additional details about how your expiration date is impacted and when FlexPay monthly payments will resume, if applicable, will be released soon.

Universal Orlando plans to reopen its theme parks on June 5 to the public, with soft reopenings for Team Members starting on June 1. From June 3-4, only invited guests (such as Annual Passholders) will be granted access. You can find the Hours of Operation here. For a full overview of all the new guidelines and operational changes leading up to their June 5 reopening, click here.

Next
Universal Orlando Will Not Require Reservations For June 5 Reopening; Additional Details Released on Face Masks, Attractions, and Volcano Bay