Throughout the park closures, Disneyland Paris has been regularly hosting videos as part of their “Watch Parties” series on YouTube, in which they share professionally-recorded productions of popular parades, shows and performances from the parks. We have already seen “Mickey and the Magician”, “Disney Dreams!”, “Welcome to Spring”, and more, yet we are always excited for another release. This week, the spectacular “The Lion King: Rhythms of the Pride Lands” show was shared by the resort, and you won’t want to miss it! 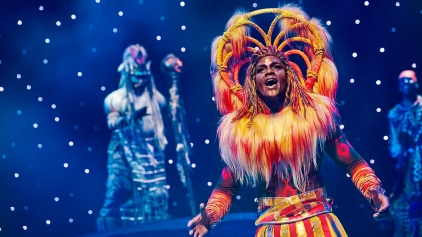 “The Lion King: Rhythms of the Pride Lands” is a show which takes place during the summer Lion King & Jungle Festival in Fronteirland at the Disneyland Park. I believe any show Disney produces using songs and music from “The Lion King” is bound to be first-class, and “Rhythms of the Pride Lands” doesn’t disappoint. We know from productions like Broadway’s “The Lion King” and “Festival of the Lion King” at Disney’s Animal Kingdom in Walt Disney World that the music from both the original movie and the sequel can be paired so beautifully with different styles of dance, acrobatics and movement, which can be seen in the stunning performance at Disneyland Paris. The props and costumes in the production are intricately detailed and tribal, and the staging takes place on an impressive, moving multi-level set. Even to watch at home, you won’t be able to deny the spectacle of the moving and emotional production. Don’t miss out, and give it a watch!

The Lion King & Jungle Festival is scheduled to take place this year from June 20th through September 13th. With the parks currently closed “until further notice” and resort reservations being cancelled through July 14th, it is uncertain whether the event will still take place. It has already been revealed that another performance on the schedule for the festival, the Jungle Book Jive, has been cancelled, however nothing has yet been said about “Rhythms of the Pride Lands”. To keep us going through the unprecedented times, earlier in the month performers from the show grouped together to create a stunning, at-home rendition of “Can You Feel the Love Tonight?”. We are very thankful that we still have lots of magical content like this coming from Disneyland Paris to enjoy while we await a trip back to the parks!

If you liked “The Lion King: Rhythms of the Pride Lands” and are interested in finding out more about the work that went into creating it, head over to watch this making-of video, which was released in anticipation of the first performance at last year’s Lion King & Jungle Festival.

Previous
VIDEO: The Voices of Liberty from EPCOT Share an At-Home Performance of “America the Beautiful” in Honor of Memorial Day