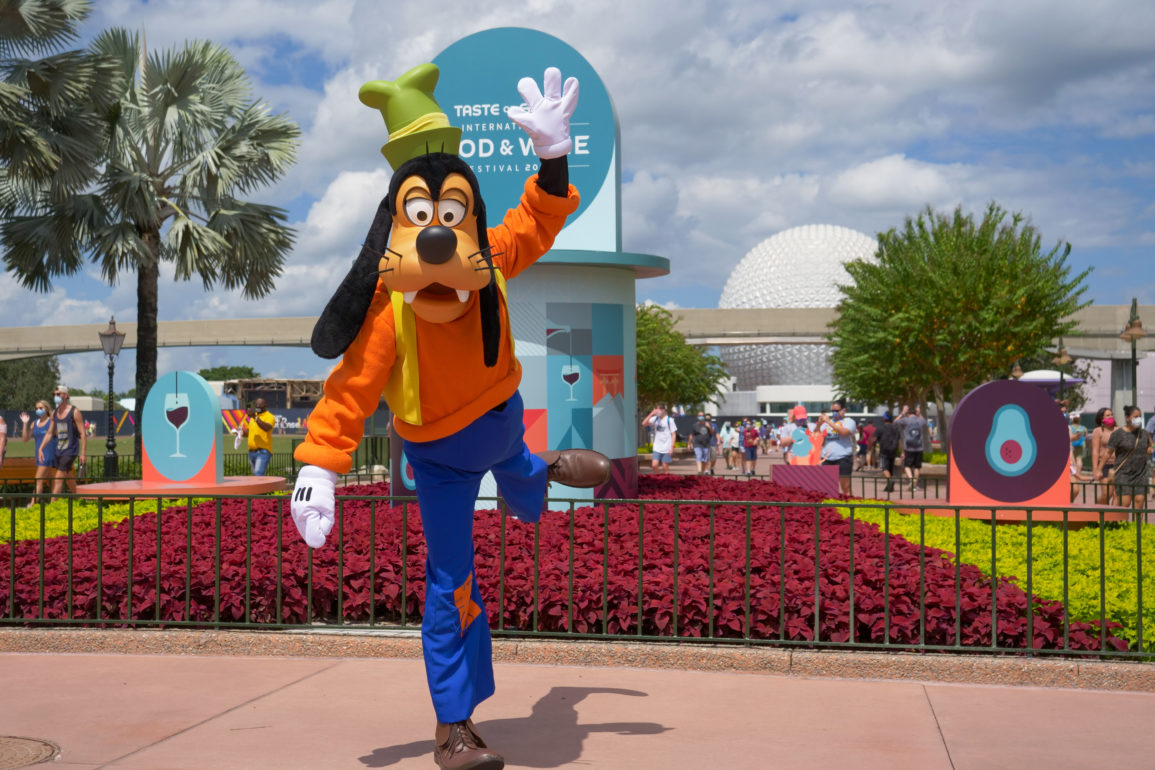 Greetings from EPCOT! We’re back into the weekend, and that means some heavy crowds and long lines as the effects of increasing capacity continue to be felt. It also means additional outlets within parks are reopening, and there are a trio of eateries making their returns today.

First up, however, are some of the recent additions to the EPCOT entryway. Signs were added earlier this week as part of the overhang refurbishment, and now a singular ceiling fan has made an appearance.

Elsewhere in the entrance plaza, the upcoming fountain which houses the Lucite pylons continues to inch closer to its big reveal.

While we mentioned additional food locations making their reopening debut today, two long-awaited spots are not among those that opened. The Donut Box and Cool Wash are both nearly ready to open, but today wasn’t their day.

At nearby Mouse Gear, some new Halloween items made an appearance today. Two phone cases and two magnets have been released, adding to the massive Halloween 2020 collection.

While not at Mouse Gear, a new Soarin’ luggage tag also debuted today, allowing true Soarin’ fans the opportunity to add some flair from the attraction to their checked bags.

Heading Around the World to Norway, there’s been an exciting development — Kringla Bakeri Og Kafe reopened today! While the bakery has a very limited menu, school bread has returned back to its appropriate home after a short stint at a nearby stand.

The third, and a bit smaller, addition to the post-closure World Showcase lineup is Sommerfest. This small counter-service location is once again open, and is a great place to grab a pretzel and a drink (and usually with a much shorter line than the Germany Pavilion stands).

Speaking of lines, guests waiting for Frozen Ever After would be joining their line pretty far back in the China Pavilion. The wait for the attraction would be well over an hour throughout the day.

Within The Land Pavilion, nearly every table was occupied and queues filled for Soarin’ and Living with the Land.

Outside of the pavilion, stroller parking was back to its old ways, with row upon row packed to their highest capacity.

At the outskirts of the Japan Pavilion, the line for Kabuki Cafe stretched past the funnel cake stand, forcing management to react and attempt to find a suitable path for the waiting parties.

World Showplace was no better, with lines stretching well past their designated queues. The line for the Mac & Cheese booth stretched through a good chunk of the pavilion.

Things were slightly calmer outside, especially once getting a little distance from some of the food booths. Character Cavalcades made their usual loops around World Showcase lagoon, adding a touch of personality to the otherwise hectic walkway.

Outside of the Imagination Pavilion things were even calmer, with Journey Into Imagination carrying a modest 15 minute wait, and Winnie the Pooh leisurely looking for butterflies.

Wrapping up our day with a handful of construction updates, Guardians of the Galaxy: Cosmic Rewind has been in a pretty steady state since the last of the solar panel backings were installed.

On the other hand, the Play! Pavilion saw quite a bit of progress this week, and the replacement of roof panels has gotten quite close to completion.

The Innoventions Plaza demolition continues to ramp up after a prolonged pause due to the park closure, and the recent work includes gutting the former Electric Umbrella site.

As we head out to check on the France Pavilion Expansion, we noticed some paint was finally added to these bronze accents which were added over six months ago at the International Gateway Skyliner station. Previously, the spots where the accents were welded to the fence had no color detail added.

Finally, at the aforementioned France Pavilion Expansion, painting is happening there as well — in this case, to the brick work which makes the main walkway of the area.

Outside of the entrance to Remy’s Ratatouille Adventure, final details are being added to the facades, and water was added to Remy’s fountain, though we haven’t been lucky enough to see it running just yet.

Thank you for joining us today at EPCOT — we hope you enjoyed the new openings and merchandise the park held today, despite the lines and crowds. Would you be comfortable visiting EPCOT on a weekend with the long lines and crowds? Let us know your thoughts in the comments.

Next
PHOTOS: First Look Inside the Incredibly Detailed “Beauty and the Beast” Themed Village Shops in Tokyo Disneyland’s New Fantasyland