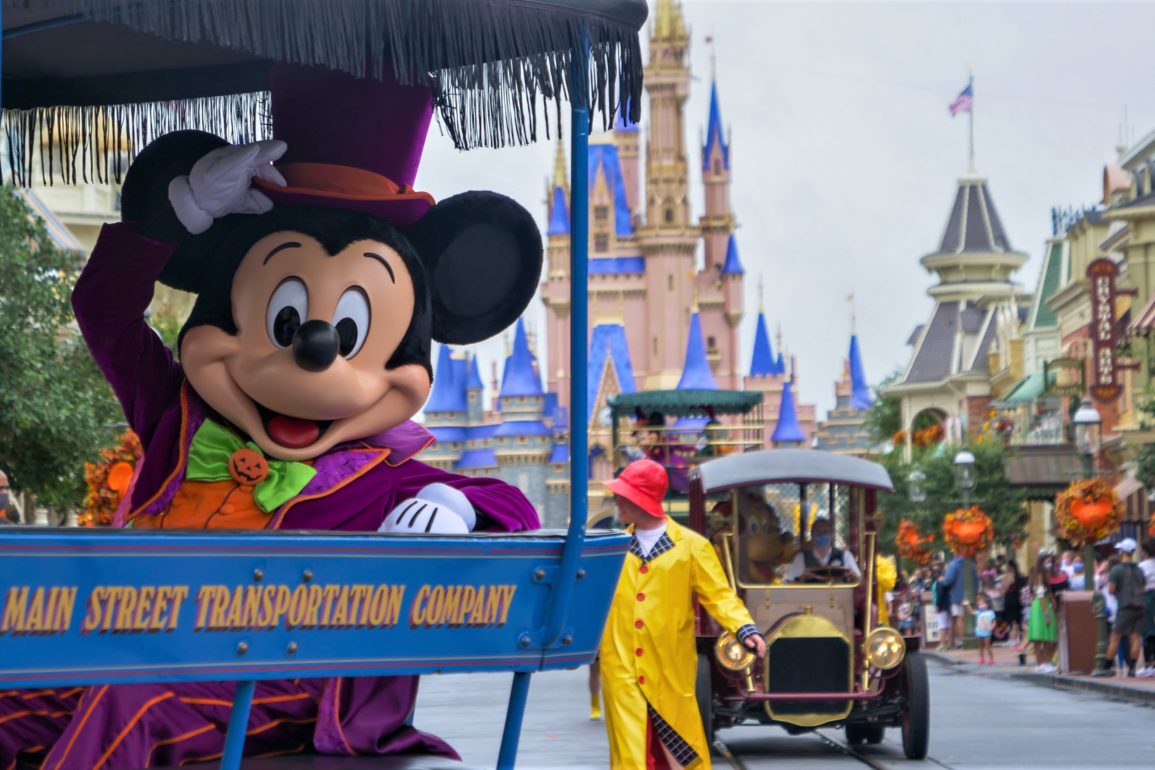 Happy Halloween (sort of) from the Magic Kingdom! We’re here for the first weekend with decorations, entertainment, and a majority of the holiday offerings that will be in place through October. Unfortunately, we had to battle “Tropical Disturbance #2” throughout the day, but it gave us some unique looks at the character offerings.

First thing in the morning, we were greeted by Mickey & Friends in their Halloween costumes, starting the festivities off right.

Adjacent to the Main Street Train Station, City Hall is still wrapped in scrim, watering down the holiday spirit just a bit. Hopefully the building will return, complete with a few decorations, before Halloween rolls around.

Shortly after our arrival, the big debut for today — The Cadaver Dans — made their 2020 return. This was special not just for the seasonal addition, but it’s the first we’ve seen of the Dapper Dans since the parks reopened.

All four members of the crew were dressed in their finest, albeit dirty, costumes. We call it ‘burial chic’.

Heading towards The Hub, plenty of Mickey Mouse pumpkin wreaths can be found, though not much more in the way of Halloween decorations.

Over in Tomorrowland, Space Mountain was experiencing a delayed opening this morning, but would begin operation not too long after and have a strong run throughout the day.

While in the area, we checked on the progress of the TRON Lightcycle / Run canopy, which saw its first section hoisted into place this week. Work seems to be moving at a steady pace, with additional sections being assembled, and small portions mounted to the supports.

It wouldn’t be long before the rain would move in, as part of Tropical Disturbance #2 that we mentioned earlier. These tropical systems like Isaias and Sally seem to enjoy the weekends at Walt Disney World as much as the guests do.

Two of our favorite characters, Anastasia and Drizella (also known as the Evil Stepsisters), would take cover at the entrance of Princess Fairytale Hall, which in some ways is an upgrade from being perched upon Cinderella Castle. With the interactivity and wit that these two bring, the close (but not too close) quarters enhance the experience.

Next door at Sir Mickey’s, the store was loaded up on a few particular pieces of Minnie Mouse: The Main Attraction merchandise. None of the recently-released Big Thunder Mountain Railroad items were available, though.

While not finding Big Thunder Mountain Railroad merchandise can certainly be a disappointment, a new Haunted Mansion shirt is always a nice find. This one has a bold tie-dye design.

A 2020 version of the light-up Madame Leota ornament also joined the lineup at Memento Mori.

In our opinion, though, it’s a bit of a downgrade from the previous version which had much nicer paint detail on the otherwise identical base.

On the topic of 2020 releases, another new addition to this year’s Christmas lineup — these porcelain figurines — has joined the ranks at Ye Olde Christmas Shoppe. The set sells for $44.99.

The much more exciting discovery was this Muppet*Vision 3D Mickey ear hat ornament, though! It has a lot of great references to the attraction, making it a must for any serious Muppets fan.

Today wasn’t a particularly eventful day in Frontierland, but riding Splash Mountain is always an event unto itself.

We headed back to Main Street for some of the last sunlight we’d have for most of the afternoon, as the rain began to move back in.

However, with the rain moving in comes a somewhat rare treat…

That’s right, it’s Rainy Day Cavalcade time! Today’s are a first for the season as they featured they characters in their Halloween costumes. We’ll be catching a second (and third) cavalcade later, though.

As a result of the rain, the line for Buzz Lightyear’s Space Ranger Spin became incredibly long, snaking around a good chunk of Tomorrowland.

The Haunted Mansion would see a similarly-long line, stretching well past the riverboat station.

The Emporium would become a bit of a mess as guests tried to find somewhere remotely dry to escape the hours and hours of rain.

Even The Confectionary had an indoor queue solely for access to the bakery cases for which it is known.

As promised earlier, we’d catch yet another Rainy Day Cavalcade to round out our day. While the rain wasn’t particularly fun today, these cavalcades always are and bring a different energy to the park.

We hope you’ve enjoyed this wet adventure around the Magic Kingdom! To be one of the first to know about all of the stories WDWNT posts, click here and follow @WDWNT on Twitter.