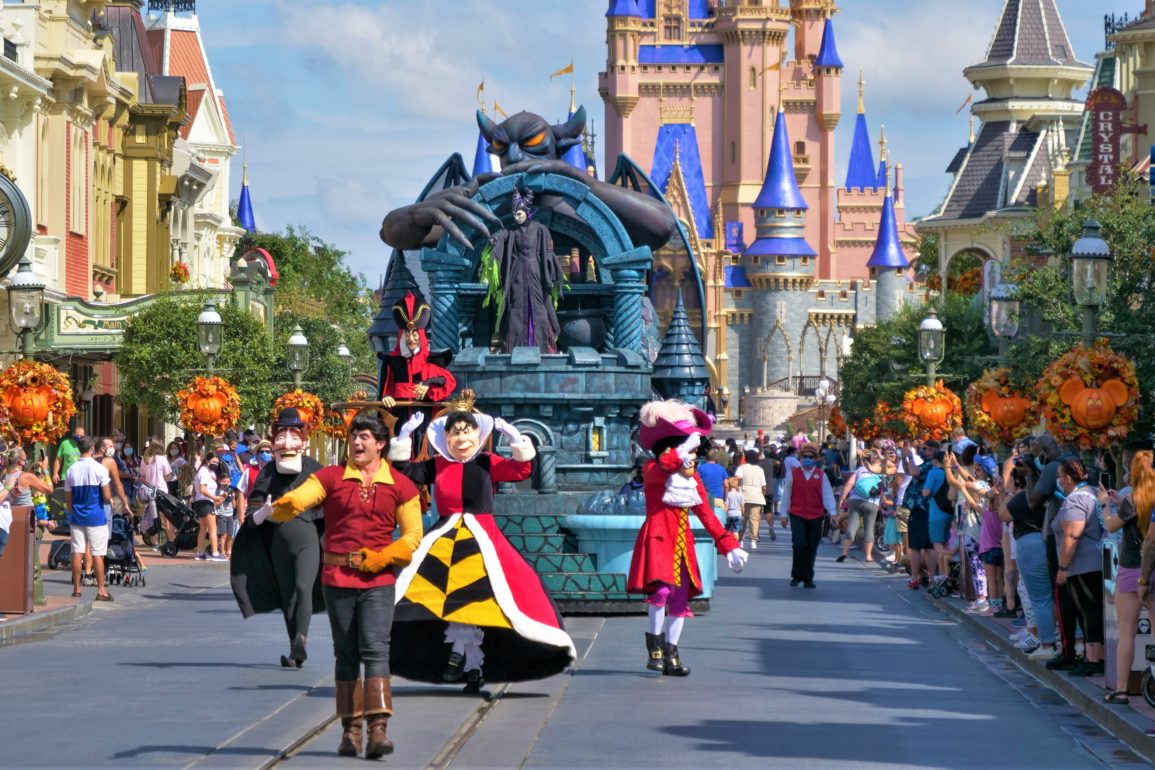 It’s Sunday Funday at the Magic Kingdom! It’s a mix of experiences at The Most Magical Place on Earth today — ranging from a ton of character sightings and new merchandise, to long lines for food and attractions, to a broken down monorail. Let’s head in and see how the day pans out overall.

The day definitely started out a little rough, as early guests to the Transportation and Ticket Center would be greeted with the monorails being out of service. Thankfully, Disney seemed to be aware of this prior to guests being allowed through security, and buses were ready to take guests on the short trip to the Magic Kingdom.

Upon being dropped off at the Magic Kingdom bus loop, the culprit of the monorail shutdown became pretty apparent. Monorail Green was being slowly towed away from the Magic Kingdom station back to the garage, causing the entire line to go down. While it’s always a disappointment when you can’t ride the monorail, seeing one getting towed is a unique sight.

Once inside the park, though, we were treated to a lovely reveal of City Hall, which only had its scrim and scaffolding removed just before the weekend. The building had been hidden behind these elements since January as part of an exterior refurbishment.

At the nearby Emporium, a trio of new monochrome plush featuring Mickey, Minnie, and Pluto have arrived. Much like the “stitched-up” set that appeared back in August, this set is limited to the same three characters at the moment.

On the topic of plush, Sir Mickey’s in Fantasyland had no shortage of Big Thunder Mountain Railroad “Minnie Mouse: The Main Attraction” plush. Guests hoping to purchase one should have no trouble, and hopefully the same is true going forward as the quantities being produced seem to be increasing with each release.

Heading over to Liberty Square, three new Haunted Mansion magnets were on the shelves, offering up some spirited additions to your car or refrigerator. One of them includes the phrase “Summoning a Good Time!” and features Madame Leota in her corruptible, cartoonish state. The whole collection of magnets can be found in a dedicated post by clicking here.

Rounding out our merchandise finds for the day is this adorable ornament which finds Mickey & Minnie Mouse hauling gifts (and a Christmas tree) on a sleigh. The ornament sells for $24.99 at Ye Olde Christmas Shoppe.

Detouring for a quick peek at construction, TRON Lightcycle / Run continues to see daily work on multiple canopy pieces at a time since the installation of the first section a little under two weeks ago. It looks like progress will proceed fairly steadily as small sections are added one-by-one.

Remember those long lines we mentioned earlier? You don’t need to look any further than this line for Astro Orbiter to get a sense of what the day was like, as the queue extends (and fills) most of the Tomorrowland Transit Authority PeopleMover’s queue space. With only one party per elevator, these guests will find a 45 minute wait in their future.

In Storybook Circus, we’d also find relatively long lines for the basics such as drinks and snacks at this popcorn stand.

Splash Mountain is perpetually a pretty long wait these days, however the line stretching well past the attraction entrance is a less common occurrence.

That wasn’t the only trouble spot in Frontierland, as the line of guests waiting for their “quick and convenient” mobile order at Pecos Bill Tall Tale Inn & Cafe would spend a while clustered outdoors awaiting their turn to enter. On the bright side, at least mobile ordering was working today.

On a happier character-focused note, Frontierland did host Chip & Dale in their Halloween costumes throughout the day.

Unlike Chip & Dale, the Evil Stepsisters seem to have found a semi-permanent home at the entrance of Princess Fairytale Hall, having moved from the rear of Cinderella Castle where guests stopping to enjoy the entertainment could block the flow of traffic in and out of Fantasyland.

With Cinderella’s Royal Table having reopened this week, it’s more important than ever to keep huddled crowds at a minimum in and around the castle.

Other characters are finding occasional homes in unlikely spots as well, such as Pooh and Friends making an appearance outside of Crystal Palace today.

Tigger, Piglet, Eeyore, and of course Winnie the Pooh himself could all be found on the patio for socially distanced picture taking.

Some characters can be found in their usual spots, with Gaston and Merida both appearing on horseback during their respective cavalcades. Gaston would be on foot as part of the Villains Cavalcade, though.

We can confirm that being on foot did not impact his swag.

Some of our other neighborhood villains were just as comfortable on foot.

The most evil of them all, though, always seems to feel the need to look down on us from a float.

Thankfully we had the princesses around to create a friendlier vibe. Something about this time of year has a lot of nefarious figures running around the park.

We finish our day with good ‘ol Sally, who comes to us courtesy of “The Nightmare Before Christmas” Halloween Processional. Sally is a great mix of spooky and princess, fitting right in the middle of today’s character spectrum.

We hope you’ve enjoyed today’s busy, occasionally broken, tour around the Magic Kingdom. Make sure to download WDWNT: The App 2.0 to be notified of all the biggest stories from Disney parks around the world.

Next
VIDEO: “The Enchanted Tale of Beauty and the Beast” Merchandise Tour at Tokyo Disneyland