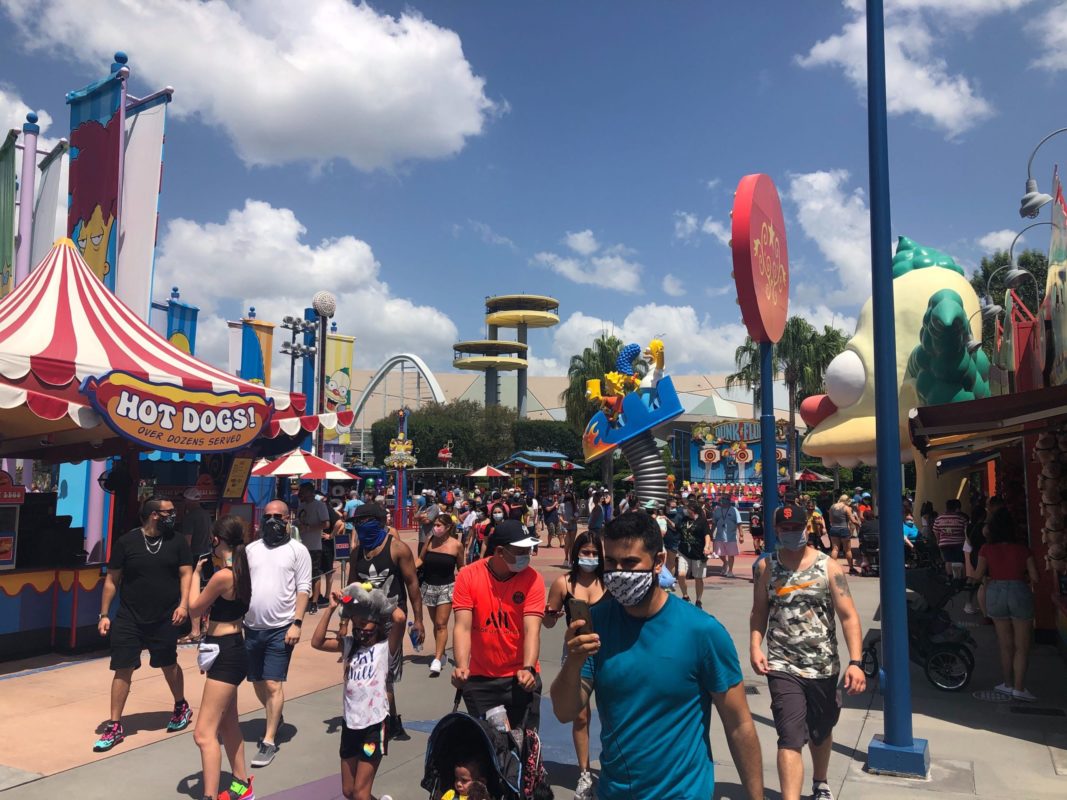 Welcome to a very intense Labor Day weekend at the Universal Orlando Resort. All week long, we had seen preparations around the park in anticipation of wild crowds, but we really didn’t realize just how crazy it would be until we arrived this morning. We joined the mass of people making their way through CityWalk for the theme parks and made a right for Universal Studios Florida first.

The parks reached capacity not long after our arrival, which is the first time this has occurred after the reopening in June.

We wanted to make a quick stop into the Kwik-E-Mart, but it was a little crowded.

What are we in line for? A hot dog.

Temporary snack carts have popped up around the parks to help feed the crowds, but the lines for food were insane throughout the day.

We’re actually hoping that nobody can find their way into Diagon Alley today.

We were attempting to take photos of the crowd and this happened.

The wait for the Hogwarts Express at King’s Cross Station was 120 minutes and the line was creeping into San Francisco. We were rammed in the leg by a double stroller at this point, too, so it looks like things are starting to get back to normal around here.

Since the parks were at capacity, we were told the only way to guarantee entry from one park to the other was to take the Hogwarts Express, which was a two-hour wait. With a little magic from a Team Member, we were able to hop a ride on the train and make our way over to Islands of Adventure. The crowds have been crazy, and things weren’t much better when we got off the train.

We decided to make our way towards the Lost Continent rather than the Wizarding World to try to get a little break from the crowds. Did you notice King Julien in this photo?

King Julien has the right idea and is riding off to escape these crazy holiday weekend crowds. Take us with you!

Once we made our way through the people, we found the bypass bridge under the Velocicoaster track to be quiet relaxing and peaceful.

The biggest problem we’ve seen today is the lines for food and drink. Even with additional locations open, all the lines are ridiculous.

Many rides are using Virtual Line only, but the lines are still really long.

We finally found a cart with no line, and we quickly discovered they were only accepting cash. This explains why there was no line. No Butterbeer ice cream for us today.

We can see that Universal was anticipating these crowds just by how many more food offerings are available. Somehow, the lines just remained consistently long for everything.

Skull Island: Reign of Kong was a 160-minute wait when we walked by this afternoon.

It’s a hot day and everyone is looking for a little relief from the weather. There was a 100-minute wait for Popeye & Bluto’s Bilge-Rat Barges.

It’s been a long day, but we decided to head back to Universal Studios Florida just to check in on things before heading out for the day. Many guests are just hanging out, enjoying being out in the beautiful weather.

It’s one of those days.

Harry Potter and the Escape from Gringotts had a 100-minute wait towards the end of the day.

It felt like the crowds were thinning out towards the end of the day, but then we spotted a crazy line for Revenge of the Mummy that stretched down beyond the entrance to the Tribute Store. We’re not insane, so we’re gonna get out of here.

It was a beautiful night, and we noticed many people out and about enjoying entertainment, drinks, and dinner around CityWalk.

That’s all for this busy day at the Universal Orlando Resort. We’ll be back again real soon, so stay tuned to Universal Parks News Today for more!

Guests Can Join a Virtual Line for a Chance to Ride on a Mardi Gras Float at Universal Studios Flori...February 5, 2022
Full List (With Prices) of 'Jaws', 'E.T.', & 'Back to the Future' Merchandise Available at the S...May 26, 2022
Pteranodon Flyers Closed for Maintenance at Universal's Islands of AdventureMay 16, 2022

Every New Release Coming to Disney+ this November: Season 2 of “The Mandalorian”, “A Christmas Carol”, and More