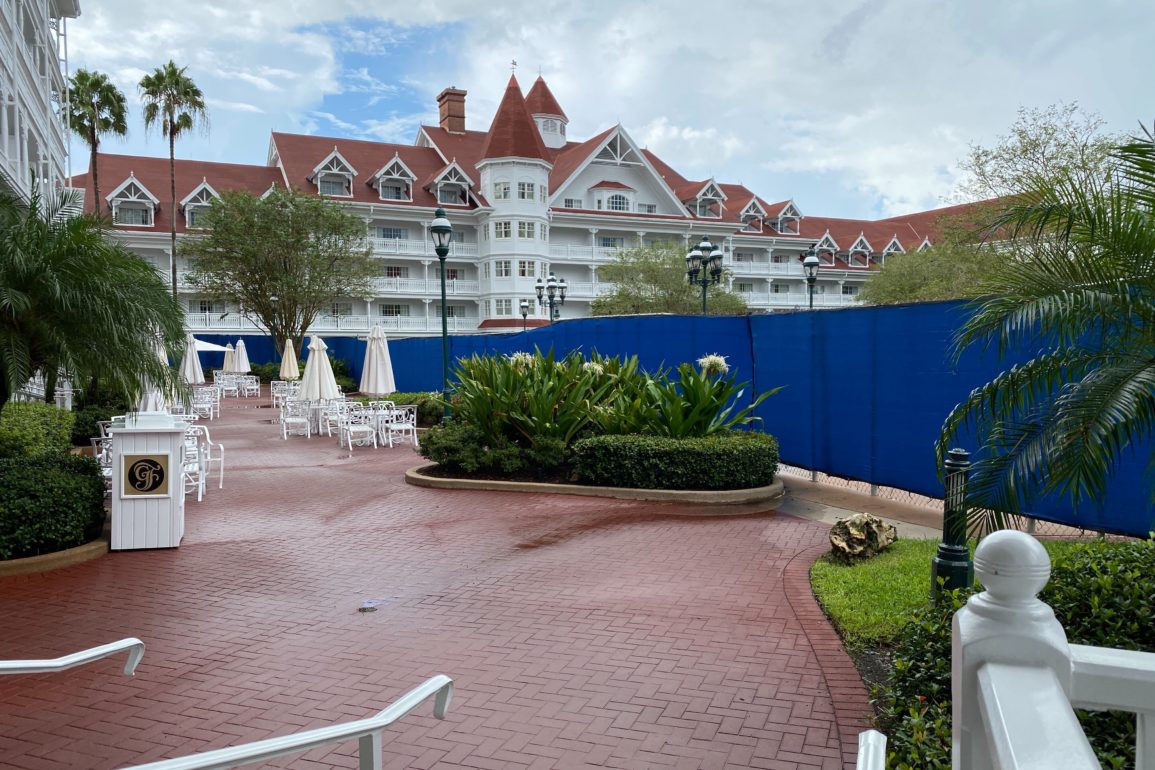 Since the NBA resumed the season this summer, professional basketball players and their families have been staying at the Disney’s Grand Floridian Resort & Spa. Disney erected fencing around the resort to create a quarantine bubble. The goal is to separate the NBA players, families, and staff from The Villas at Disney’s Grand Floridian Resort & Spa and the outside world. The partition has protected the players and staff from COVID-19 infections during the season. Soon, the wall will be removed to make way for the resort’s reopening on September 21.

The fences by the entrance have already been removed. We noticed fencing stacked by the road near the resort earlier, only to be hauled away hours later. According to a Disney security guard, the bright blue fencing, will be gone by September 22, marking the end of the quarantine bubble.

As you can see, the fencing remains to protect at least one NBA family and NBA security personnel within the quarantine bubble. Reportedly, a family and their accompanying security guards will stay within the bubble until September 22. No fencing should remain beyond that date.

We spotted refurbishment work at the Courtyard Pool, which suggests that Disney will be on target for their September 21 reopening of the resort.

The Alice in Wonderland-themed water play area is still under refurbishment at this time. The project was planned to be completed by March 20, but was inevitably delayed by the COVID-19 shutdown.

Inside, the resort appears quiet and empty, with preparations also underway.

Citricos is now closed off by planters and a bench.

Basin is also preparing to reopen. Though the familiar “Sorry, We Are Closed” sign appears on the door, it is evident that this cast member is stocking the shelves.

Naturally, Disney moves materials and merchandise all around the resort, but you’d never know it. Disney is a master of hiding the “backstage” operations at all of its properties. These trucks are clearly coming and going with no effort to “protect the magic.” Of course, this probably equates to transitioning from the resort being a quarantine bubble to opening it to the public.

Many fans of Disney’s Grand Floridian Resort & Spa will be glad for the reopening this month. As the photos suggest, the cast members onsite are working hard to get ready for new guests. Though the area appears to need a lot of work to make it guest-ready, Disney can work magic virtually overnight to transform this resort in order to make the magic happen.

Are you excited to see Disney’s Grand Floridian Resort & Spa reopen? Tell us what you like about this resort in the comments below.