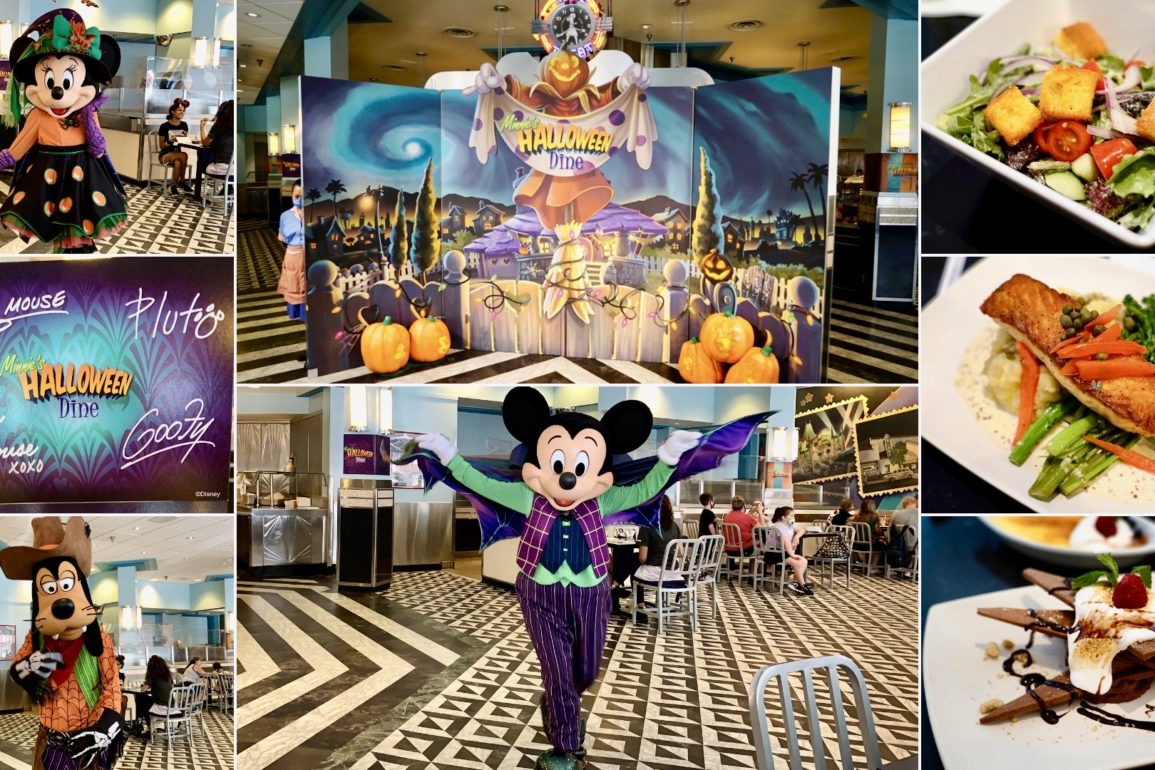 Disney Parks Blog described the event as the following:

At Disney’s Hollywood Studios, there’s some Halloween fun in store at Hollywood & Vine where Minnie’s Seasonal Dining is set to return Sept. 25. While it may look a little different than the last time you visited, you can get in the spooky spirit during Minnie’s Halloween Dine with a monster feast served to your table where you will be able to wave and snap photos of your favorite characters such as Minnie Mouse, Mickey Mouse and their friends. It’s a boo-tastic time filled with Halloween décor and music, scary good food, and more!

Let’s swing by Hollywood & Vine and see what spooky offerings Minnie has ready for us.

There are social distancing markers leading into the restaurant and each side of the stairs is marked as either entrance or exit only.

The restaurant is full of Halloween decorations and music.

The buffet is no longer available and there is a QR code menu to order from.

Inside, tables are spread apart for social distancing. And now, let’s move on to what you’re really here for: adorable characters.

Minnie Mouse as a Witch

Mickey Mouse as a Vampire

Goofy as a Cowboy

Pluto as… a Halloween Pup

Mickey and Minnie alternate with Goofy and Pluto in walking around the restaurant every few minutes. The characters stopped for a moment at each table to wave. We were instructed to remain seated by our waiter and periodic audio reminders also told guests to stay seated. After the characters came out a few times, they all came out at once to cast a “Halloween spell” and dance. You can view all of the characters interacting with us in the YouTube video below:

At the end of the meal, every guest gets a card with the characters’ autographs:

Either the lunch or dinner experience is $55.00 for adults and $36.00 for children ages 3-9. Breakfast isn’t currently available. Included in the adult price is a family-style salad, entrée, and dessert. You can view the full menu online and read on for our reviews.

Despite their buttery sheen, these Parker house rolls looked better than they tasted, but they still hit the spot.

The butter was sprinkled with pale pink salt—not as good as what you’ll get at Brown Derby, but still tasteful.

The salads were the weakest point of the meal, and it’s not because it was a salad course—we typically come to Disney’s Hollywood Studios for salads, but this was generally a soggy mess, with an off-taste to the ranch dressing.

This salad included cornbread croutons which had softened, making them unpleasant to eat.

Our suggestion is to get the vegan salad, which seemed a bit fresher, and surprisingly had the better dressing of the two.

The focaccia croutons in the vegan salad were likely pre-packaged, but at least they were crunchy.

Looking for a better value, we opted for the Prime Rib, which came as a sizeable portion with creamy, well-seasoned mashed potatoes.

The Brussel Sprouts were surprisingly delicious, as were the pearl onions.

The steak itself, often a hit or miss, had a very well-seasoned exterior, and wasn’t over- or under-salted. It wasn’t tough or gristly, and even if you opt out of the fatty corners of the steak, you still get a good amount of it.

We didn’t know what to expect from the salmon, but since it was recommended to us by the waiter, we went with that.

The fish itself was seared perfectly, forming a crisp outer crust that made it all the more savory. The broccolini was a nice touch, and it was cooked perfectly, with no hard stems or mushy florets.

Don’t let the mustard sauce steer you away from this dish, as it’s more of a white butter cream sauce that was very mellow, and delicious.

For dessert, we opted for this deconstructed version of what is essentially a s’mores icebox cake.

The chocolate graham crackers were huge, and layered with chocolate mousse and torched marshmallows. It’s basically like an elevated form of chocolate pudding, making it an easy dessert that anyone will love.

While tempted by the other pies on the menu, the creme brûlée was shockingly fantastic, with a thick, burnt layer of sugar that you can crack through with your spoon.

Do note that the creme brûlée is not served hot, but for a Disney creme brûlée, it was incredible.

We’d definitely have this again, and most people will be happy with it… so long as they don’t expect it to be hot.

Overall, we felt Minnie’s Halloween Dine at Hollywood & Vine was a great value for the $55 price. Between the food and Halloween experience, this was a better deal than Cinderella’s Royal Table right now.

The characters would really take their time at each table hamming it up for photos or video, and made sure you had all the shots you needed before moving on to the next table. The photos are just as good as before, with the main difference being that you’re not standing next to the characters anymore.

Between the attentive service, the spooky decor, and the cheesy, yet guilty-pleasure Halloween music like “Thriller”, “Bad Moon Rising”, and some Disney Halloween jams mixed in, it definitely seems that they’ve checked all the right boxes at Hollywood & Vine.

For $55, you get 3 courses, 2 of which were very good. If you get more “expensive” dishes like the salmon or prime rib, you extract the value very well—PLUS, they take discounts and Tables in Wonderland.

We’d go as far as to say this is the most Halloween-y experience you can get at Walt Disney World right now. That’s right, we said it. Minnie’s Halloween Dine is the best way to celebrate Halloween this year—even better than at the Magic Kingdom.