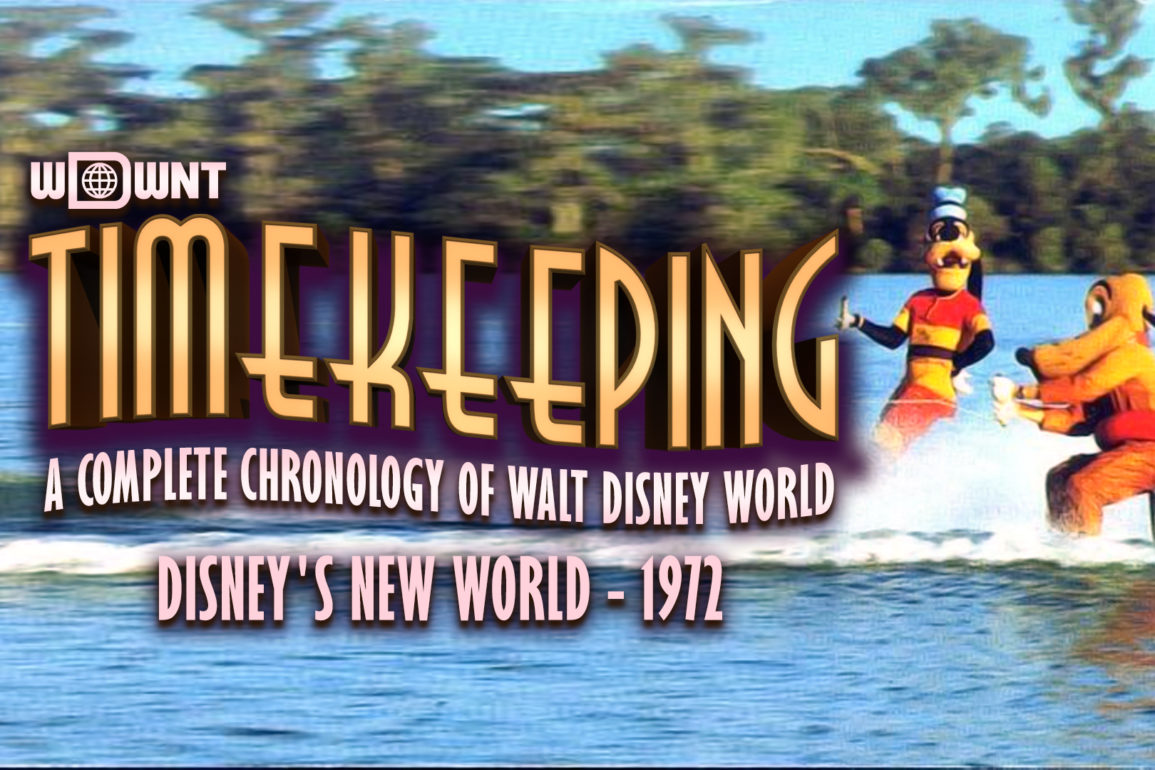 Walt Disney Productions entered 1972 a very different company than it had been a year before. Walt Disney World opened three months prior and proved to be a hit. The company was under new leadership, for the first time without a Disney at the helm. Donn Tatum was now the Chairman and CEO, and Card Walker was President and COO. And while we know the company would be entering a stagnant phase, the immediate plans for Walt Disney World focused on completing phase one of the plan—and Walt’s dream of EPCOT wasn’t quite the top priority.

The first Walt Disney World theme park would already welcome its 1,000,000th guest by the end of its first year, but along the way, it saw the addition of attractions, restaurants, and shops. It also saw its first closure approximately half a year into its existence. The first known casualty of change would be Adventureland’s Safari Club Arcade by March. The site would become Colonel Hathi’s Safari Club and the latter would be used to extend queue space for the immensely popular Country Bear Jamboree. The Fife and Drum refreshment stand opened in a corner of Liberty Square near the hub canal this year, as did the Columbia Harbor House. Fantasyland saw two auditions: in March, they added Merlin’s Magic Shop where you’ll now find Sir Mickey’s, and on December 12, The King’s Gallery inside Cinderella Castle, where Bibbidi Bobbidi Boutique sits today.

Major attraction additions weren’t quite in the cards this early, but there were changes. The Walt Disney World Railroad added the Frontierland Station on or around May 1. This original station was a slightly raised, simple building located where the current Frontierland parade entrance/exit is located. The parade route at that time ended about where the current train station is. A fourth train, the Roy O. Disney, had already entered service on December 1, 1971. If You Had Wings, sponsored by Eastern Airlines, opened on June 5 as the park’s first free ride. The ride focused on Eastern’s “Carribean destinations” and had an area to book a trip as you exited. And while individual ride tickets stayed the same, admission to the park when up $0.25 in February, and in October, the 7- and 11-count adventure books went to 8- and 12-count tickets.

Due to guest demand (no, really) construction began on Pirates of the Carribean in Adventureland early in the year. It’s well known that Pirates of the Carribean was never planned for Walt Disney World, as it was thought it would not be as exotic to a Florida audience. A Marc Davis-designed similar boat ride—titled the Western River Expedition—was meant to fill the void left without Pirates, but complaints of the lack of the world famous attraction caused Disney to quickly add a shortened version of the Disneyland staple. This appears to be the death blow for Western River Expedition, as the company’s 1972 annual report no long mentions the ride, but touts the 1974 opening of Big Thunder Railway, a version of an attraction originally designed to be part of Western River’s Thunder Mesa complex. “The Space Mountain”, as the annual report called it, and the Plaza Pavilion also began construction on December 15.

Outside of the parks, things also continued to evolve. One of the most famous is the Walt Disney World Water Ski Show, at some point later renamed to Wonderful World of Water. The show which debuted in summer would run up to five times a day, and while it could obviously be seen from many parts of the lagoon, there was a paid ($0.50, the raised to $0.75) special viewing area off to the side of the Magic Kingdom entrance, near the monorail station. Seven Seas Lagoon and Bay Lake also hosted a variety of paid cruises in the evenings. These included general tours, cocktail cruises, and dinner cruises on the paddlewheel ferry boats, a yacht, and even a Chinese junk ship that docked at the Contemporary.

Around the lagoon, the monorail fleet also expanded to ten trains by the end of 1972. Monorails Red and Yellow had actually come into service on November 7 and December 3 of the previous year, respectively. July 3 saw the addition of the next train, Monorail Pink, and soon thereafter, Monorail Silver on August 16. Monorail Purple joined on November 14 and finally, Black completed the initial fleet on December 22.

Like the parks, the Contemporary, Polynesian Village, and Fort Wilderness each saw incremental changes. At both hotels, decor changes to the guest rooms were already underway as guests had complained that they were rather bland. At the Contemporary, the Grand Canyon Terrace expanded, and the El Pueblo opened just next to it, hosting the first breakfast buffet at Walt Disney World. Downstairs, the Gulf Coast Room became a higher-end restaurant, with jackets required for men as part of the dress code. With these two spring additions, the Grand Canyon Terrace Lounge closed.

The Polynesian Village saw little physical changes other than the beginning of room upgrades. The aforementioned Chinese junk, known as the Eastern Wind, was added to the Polynesian marina. A longtime pianist named Ramon Bueno began playing at the Tambu Lounge at some point during the year. Fort Wilderness doubled the number of campsites as it continued its expansion, and the Fort Wilderness Railway began construction. The Golf Resort, now Shades of Green, began construction as well. At this point, the Asian Resort was still being planned for 1974.

Far on the other side of the property, near the current site of Disney Springs, there was also major construction. Three hotels—the Travelodge, Howard Johnson, and Royal Inn were now open in what was called Motor Inn Plaza. Also, Lake Buena Vista began development as a residential community. By the end of 1972, 80 villas had already been constructed and leased, the Lake Buena Vista Golf course opened, and construction of the clubhouse, 53 more villas, and recreation facilities were underway.

1972 can hardly be considered a key year in Walt Disney World history, but it demonstrated from the very beginning the resort’s proclivity to change and evolve. Key projects that would shape Walt Disney World—and the public’s perception of it—were underway. The general public might not know about If You Had Wings, but two of the first things most people will think of, like Pirates of the Caribbean and Space Mountain, were well underway. And they were just the beginning of other grand plans. However, 1973 and the gas crisis would soon change the trajectory of what Walt Disney World was to be forever.