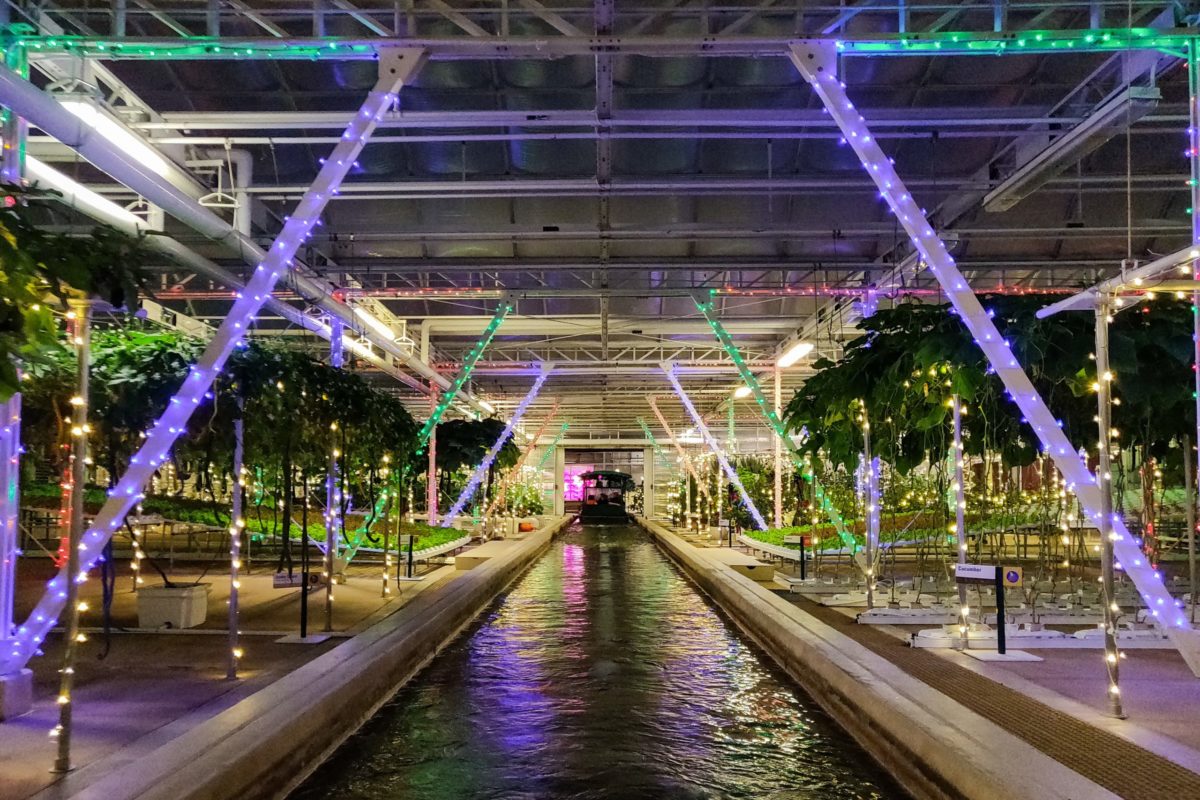 Welcome to an exciting Sunday at EPCOT! While we knew coming into the day that it represented the official end to the Taste of EPCOT International Food & Wine Festival, we had no idea how much else would be happening in the park — tons of new merchandise (including pavilion ears, Loungefly bags, flannel character shirts, and more), the debut of Living with the Land’s Christmas overlay, and the return of a handful of World Showcase retail locations. With all of that on deck, let’s get right into it.

Around the park, we’re beginning to see transitions from Food & Wine to Festival of the Holidays as topiaries vanish and holiday-themed displays appear in their place.

Tracking the other more substantial projects in the park, the East main entrance restrooms have yet to reopen despite the walls being removed a few days ago.

Work on the facade of Guardians of the Galaxy: Cosmic Rewind began a week ago, and steady progress has been made as framing now stretches across a large portion of the front of the structure.

The neighboring Play! Pavilion still has a handful of visually out of place roof tiles after the vast majority of them were replaced over the course of several months.

Rounding out the construction in the soon to be World Celebration, both Innoventions East and West are seeing highly moderated amounts of activity, with most of the recent work still limited to interior demolition.

Over at the Imagination Pavilion, Joy has been bestowed with a new pinwheel as her arsenal of props grows beyond her trusty stick which has been used for fishing, golfing, and playing baseball.

Moving on to the vast assortment of new merchandise today, new flannel shirts featuring Mickey, Minnie, Goofy, and Pluto were introduced at EPCOT. Click here to check out our post with all four designs.

Out in World Showcase, a host of shops reopened in both the Italy and France Pavilions. Sadly, the Italy shops didn’t offer much in the way of new merchandise.

It was a different story in France, however, as the reopenings brought a ton of new items, not to mention La Maison du Vin for all of your wine and Champagne needs.

The shop also held a trio of new Loungefly items featuring Marie from The Aristocats. The denim-clad accessories are a fun addition to any cat lover’s wardrobe.

That wouldn’t be the extent of Marie’s presence, however, as a “Dreaming of Paris” line debuted featuring nine new items crossing over the adorable feline with her Parisian digs.

Rounding out the shop, items from the Disneyland Paris Minnie Mouse collection which were previously available at the now-closed Annual Passholder pop-up shop, have now arrived in the France Pavilion.

While in the France Pavilion we of course had to take a look at the expansion project, where the most notable activity is the addition of painted murals near the entrance which began earlier in the week. The rest of the expansion is looking quite ready for its confirmed 2021 opening.

In the U.K. Pavilion, both Alice and Mary Poppins seem to have gotten settled in their new new garden home, where guests can meet and greet the characters (from a distance, of course).

We found Belle as part of the Princess Promenade cavalcade as it rolled through the Norway Pavilion.

Elsewhere in the pavilion, a few new pieces of merchandise have popped in, a couple of which bear similar artwork to the Limited Edition Norway MagicBand which recently appeared.

One of our final stops of the day — or night, as it were — was into The Land Pavilion to check out the “Merry and Bright Nights” Christmas overlay on Living with the Land.

The attraction dazzled with thousands of lights and decorations throughout the greenhouse. Be sure to view our detailed post with loads more pictures and a video ride-through of the holiday additions.

Rounding out our evening, we took a final look at the Taste of EPCOT International Food & Wine Festival display, with the Christmas tree fittingly taking over in the background as the Festival of the Holidays prepares to move in.

We hope you’ve enjoyed our pre-holiday stroll through EPCOT! For all of the upcoming news and reviews from the Taste of EPCOT International Festival of the Holidays, be sure to visit WDWNT.com all throughout the week!