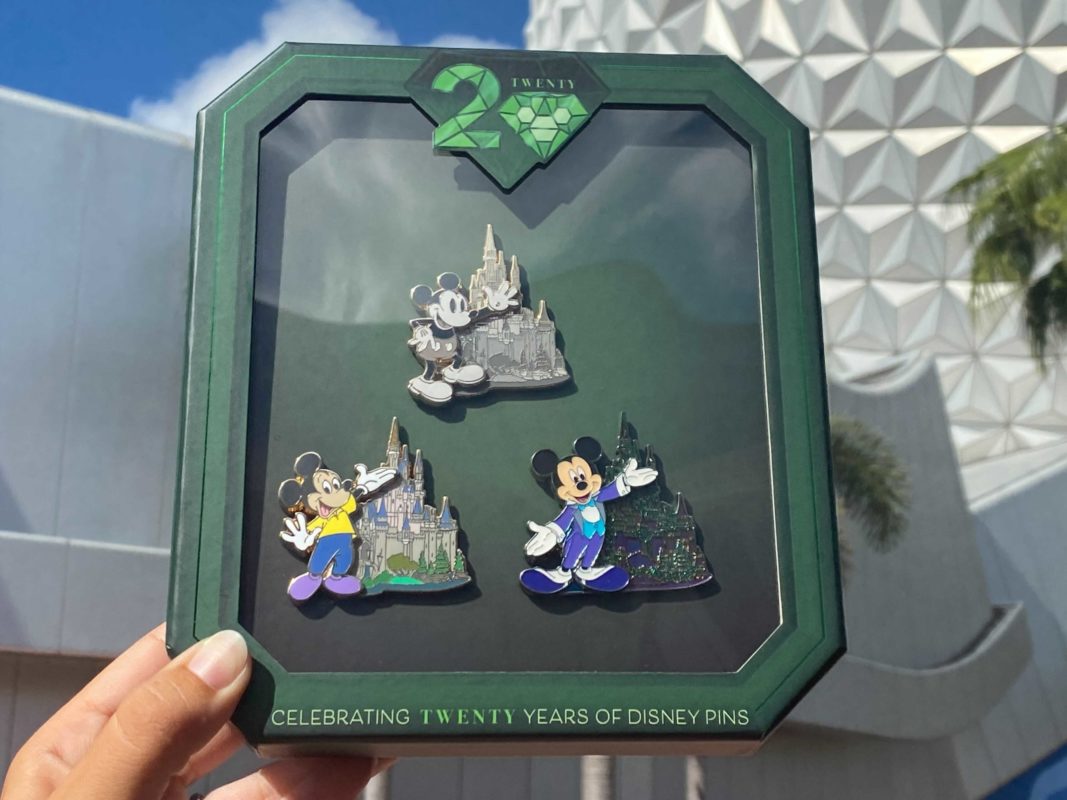 This year, Disney Pin Trading is celebrating 20 years of magical pins, but next year, we’ve got an even bigger anniversary in store: the 50th anniversary of Walt Disney World! While this year’s pin event has come and gone, a few of the limited edition pins and pin sets have made their way to EPCOT, and one in particular may hint at the main mouse’s ensemble for next year’s celebrations.

The Walt Disney World Castle Collection features Mickey through the years, standing alongside Cinderella Castle in its various forms. As the castle goes from grey, to storybook blue, to iridescent, Mickey’s outfit changes with it, from classic black-and-white Mickey, to casual ’80s/’90s Mickey, to Mickey in a purple and blue ensemble, complete with royal blue shoes and spats. At the start of 2019, Mickey and Minnie debuted all-new outfits for Mickey & Minnie’s Surprise Celebration, in celebration of the characters’ 90th anniversary. For Walt Disney World’s 50th anniversary, Cinderella Castle has received a royal blue and pink paint job and iridescent accents along the Magic Kingdom toll plaza entrance. Even the 50th anniversary logo has a touch of iridescence:

This pin set could be our first look at Mickey’s outfit for next year’s festivities, although the exact slate of 50th anniversary happenings has yet to be released.

For those more interested in the pin sets themselves, a limited quantity of “leftover” pins are now available at Pin Traders in EPCOT. The Walt Disney World Castle Collection Box Set retails for $119.99 and is a limited edition of 250.

The Disneyland Castle Collection Box Set is also available for $99.99, and is a limited edition of 1,500.

Are you looking forward to seeing Mickey and Minnie in all-new outfits for the 50th anniversary? Will you be heading to Walt Disney World for the celebrations? Let us know in the comments below!

PHOTOS: Recently Replaced Queue Wall Decals Are Already Peeling at Mickey and Minnie’s Runaway Railw...January 22, 2022
New Water-Resistant Jacket and Baby Na'vi Plush Arrive at Pandora – The World of Avatar in Disney's ...May 20, 2022
'Princess and the Frog' Splash Mountain Overlay to Open in 2024, Summer House on the Lake Restaurant...June 2, 2022