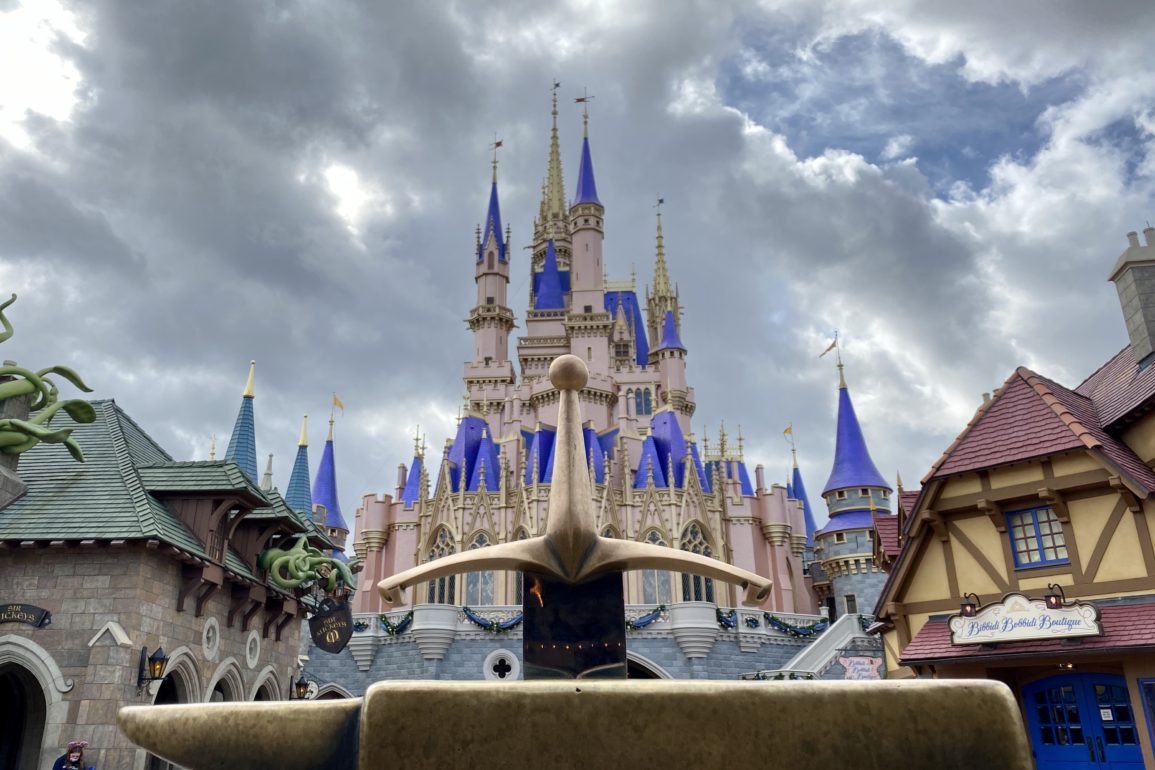 Hello from a chilly, windy day at the Magic Kingdom! Despite the chill in the air, we came out to check on what might be new here, and we weren’t disappointed. Let’s get started!

When we came in to the park, we noticed right away that the Christmas-themed window displays had been changed out at The Emporium.

Inside The Emporium, we found a few pieces of new merchandise to share with you. Our first find was this adorable bucket hat made out of the same frosted vinyl that the Disney Dogs and Cats raincoat is made out of, making this hat waterproof and a perfect match for the jacket. It retails for $29.99.

Next, we found three phone cases. Two of them were these cases with built-in card holders in the back.

The third was this “I Love My Disney Dog” phone case featuring Pluto hanging over the top edge. For more pictures and information on these cases, check out our article here.

To go along with the phone cases, we found this new PopSocket featuring Grumpy from “Snow White and the Seven Dwarfs”. It retails for $14.99.

While in The Emporium, we spotted these talking toddler porg shoulder pets. This is the first time we’ve seen these little guys anywhere outside of the Creature Stall in Black Spire Outpost. They were a far way from home!

Next, we headed over to Tomorrowland where we found more concrete work underway. This recently-poured patch was about 12 feet from the patch we saw repaired on Wednesday.

We went in to Tomorrowland Light & Power Co. to check out what new phone cases and shirts might be in the MaDe kiosks, but the whole system seemed to have crashed.

While we were there, we did find this new PopSocket featuring Tinker Bell. It retails for $14.99.

We checked on menus around the park and found that the lingering Christmas Churros at Peco’s Bill Tall Tale Inn & Cafe had finally disappeared, although the regular “Churros with Chocolate Dipper” appear to be using the Christmas Churros picture.

We found filming underway on The Hub for most of the day today, with one of the Walt Disney World Ambassadors in the “hot seat” when we passed by.

Across the Rivers of America on Tom Sawyer Island, we found that Harper’s Mill had gotten a makeover overnight. A whole new exterior had been put on the building, with fresh stained wood replacing the original exterior. The iconic “Harper’s Mill” painted sign is now gone from the building. For more pictures and information, check out our article here.

Each box contains one revealed pin and one mystery pin.

In other pin news, back at The Emporium, we found this Open Edition Nightmare Before Christmas Jack Skellington “Love” pin for $9.99.

When we passed by Pirates of the Caribbean, it was down for technical difficulties. It did come back up later in the day.