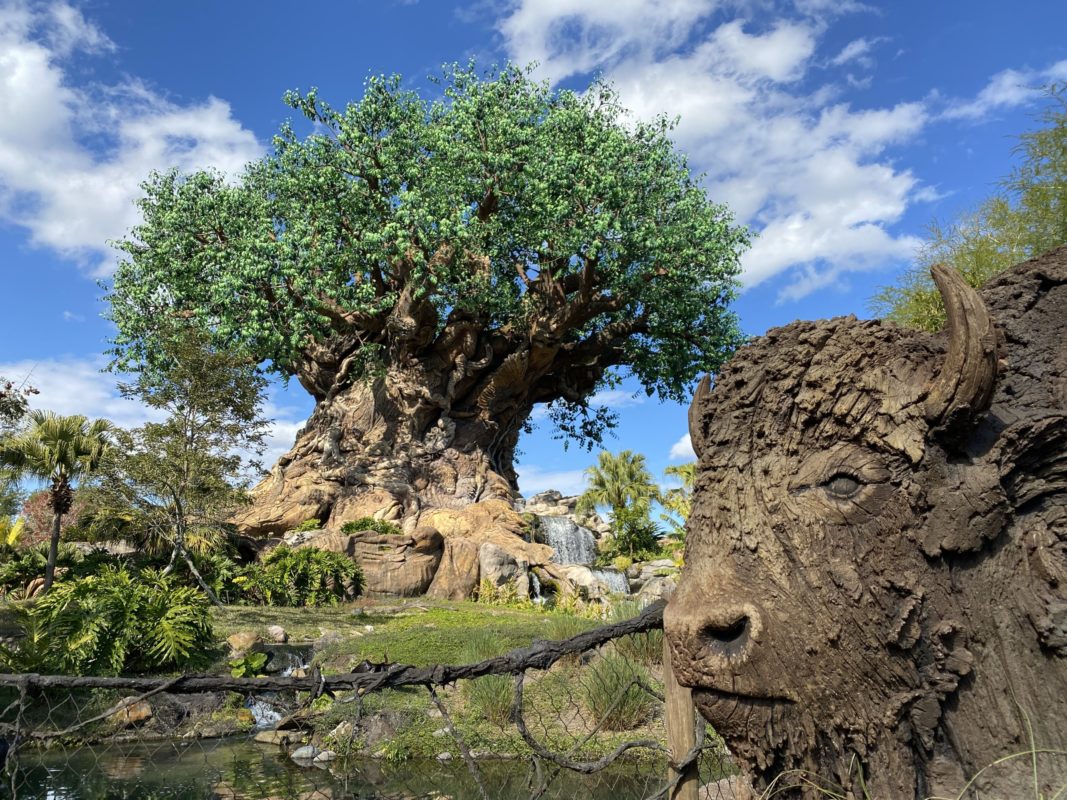 Hello from a perfect park day! We had beautiful weather today, which was especially nice since it’s been a bit chilly recently. Encouraged by the warmer temperature, we decided to check out the Magic Kingdom and then park hop to Disney’s Animal Kingdom to check out what might be new in each park. We found some exciting things, so let’s get started!

After witnessing the Tomorrowland Transit Authority PeopleMover testing yesterday, we had hoped to find it in a soft opening stage today, but unfortunately we were met with this now-familiar sign. We can’t wait to ride this iconic attraction once more!

With the Rivers of America beginning to fill with water just yesterday, we were excited to see what the water level would look like after filling all night. It was a bit anticlimactic as the water had only risen to the bottom of the Liberty Square Riberboat track, but nonetheless we were pleased to see progress.

Progress at the construction site for TRON Lightcycle / Run is coming along quickly, with this assembled piece of canopy almost ready to hoist into place.

Visible work began today on the facade of Bonjour! Village Gifts. We were surprised to see an entire boom lift was hidden behind those planters!

It wouldn’t be a day at the Magic Kingdom if we didn’t find a new patch of fresh concrete blocked off from guests. Today’s patch was about 10 feet from yesterday’s patch.

We found the popular neon park icons Loungefly restocked at Star Traders today. This bag has been out of stock for some time now, so it was a surprise to see it today.

We found some fun merchandise in the parks today that we wanted to show you. First was this glass gallon jar from “Up”, which we found at The Emporium for $24.99.

Keeping in the “Up” theme, we found these open edition pins today as well. For more pictures and information, check out our article here.

Back at The Emporium, we found a new dog toy from the Disney Tails line featuring Minnie’s iconic polka dotted bow for $17.99.

We also found these culinary additions to the Disney Dogs and Cats merchandise line with these spatula and cookie cutter sets, retailing for $19.99 each.

The next new piece was this silk headband featuring Minnie Mouse in red and pink with “xoxo” for Valentine’s Day, retailing for $13.99.

We found two youth long sleeve shirts with jersey-like writing going down one sleeve and a number on the back, each featuring an iconic character. This yellow shirt featured Pluto.

We had a great time at the Magic Kingdom, but it was time to head to Disney’s Animal Kingdom! It’s been far too long since we were there, and we were excited to check out what might be new there.

A large portion of Gorilla Falls Exploration Trail has been closed for refurbishment, leading to the remaining part of the open trail being turned into a two way walking path. For more pictures and information, check out our article here.

Kali River Rapids is closed for it’s yearly refurbishment, and we spotted through the trees that the ride vehicle loading area has been drained of water.

While looking for a snack, we noticed that Flame Tree Barbecue is still offering some of their “Holiday Exclusives”. While we’re not disappointed to see this yummy drink still on the menu, it did surprise us to see it still under the Holiday heading.

We found some more merchandise at Disney’s Animal Kingdom that we wanted to show you, starting with this sweatshirt from Island Mercantile for $42.99. We love the characters on the sleeves!

This neon Walt Disney World logo youth shirt is sure to get you seen! We found it at Discovery Trading Co for $24.99.

We found a new youth crop tank for $24.99 at Windtraders.

We had a wonderful day at Disney’s Animal Kingdom, and we hope you enjoyed coming along with us as we park hopped! Have a magical day!