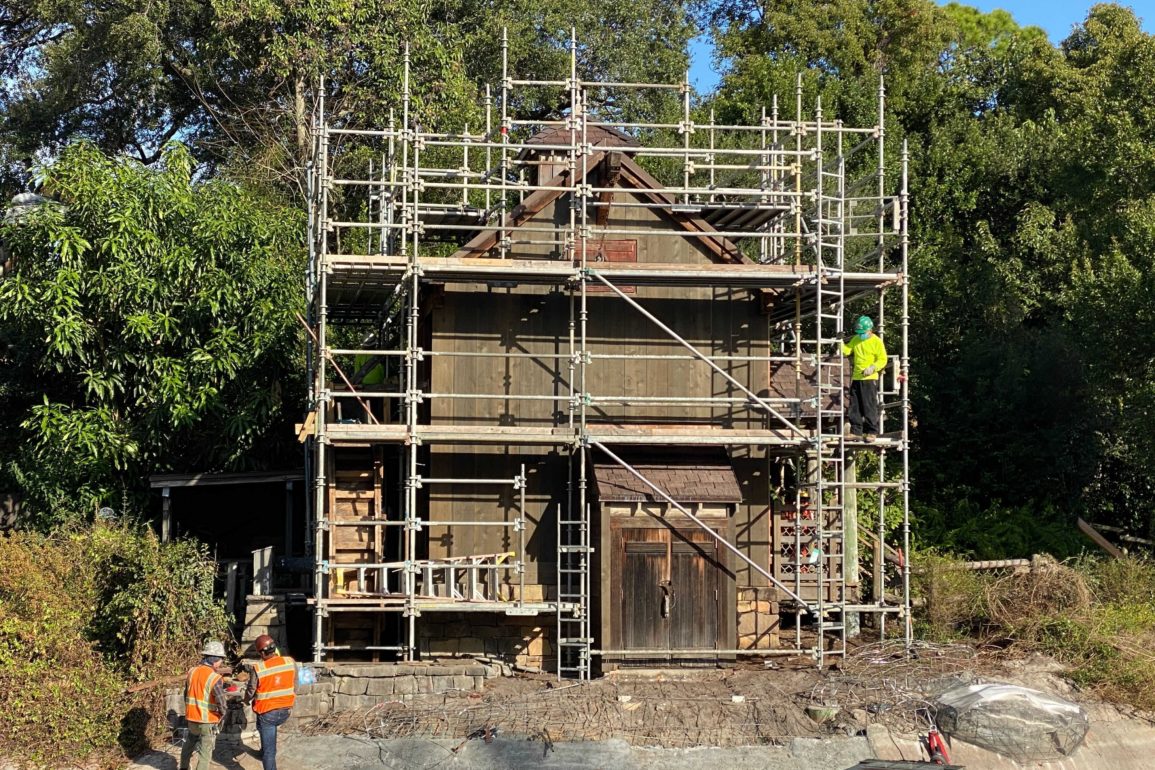 Tom Sawyer Island and the Liberty Square Riverboat are closed for refurbishment through February and we’ve been keeping an eye on their progress.

The visible riverboat track has been replaced, and today we saw some workers at one section of it. Plus, we spotted another construction worker crossing a Tom Sawyer Island bridge.

The portion of track curving past the riverboat’s station and towards The Haunted Mansion seems to be complete.

Most work has been concentrated around Harper’s Mill on the island.

At first, we thought the building had received a completely new paint job, including painting over the “Harper’s Mill” sign. However, we learned that the wood is actually all being replaced.

It looks like some work is also being done on the stone wall and barrier separating the building from Rivers of America.

Harper’s Mill was previously a barn red, with the name painted in white below the roof.

It is currently just brown. Without the red, it doesn’t stand out as much against the green trees.

We expect the “Harper’s Mill” sign and possibly the red paint to return to the building.

While construction continues, the building is surrounded by scaffolding. This is the only visible refurbishment on Tom Sawyer Island, but more is probably happening throughout the island.

We could see wood replacement underway to the side of the building.

Several construction workers were at this spot near the island’s windmill.

Across from Harper’s Mill, some construction workers appeared to be laying cables in the bushes near the docks.

They were close enough to the walkway that guests could have struck up a conversation with them if they wanted to do so.

The refurbishment is planned to come to a close on February 28, 2021, though many construction and refurbishment projects have been delayed throughout Walt Disney World. Are you excited to see what else might be refreshed on Tom Sawyer Island? Let us know in the comments.

Previous
REVIEW: Channel Your Inner Warhol with NEW Grilled Cheese and Canned Tomato Soup at Pop Eats! for the 2021 Taste of EPCOT International Festival of the Arts