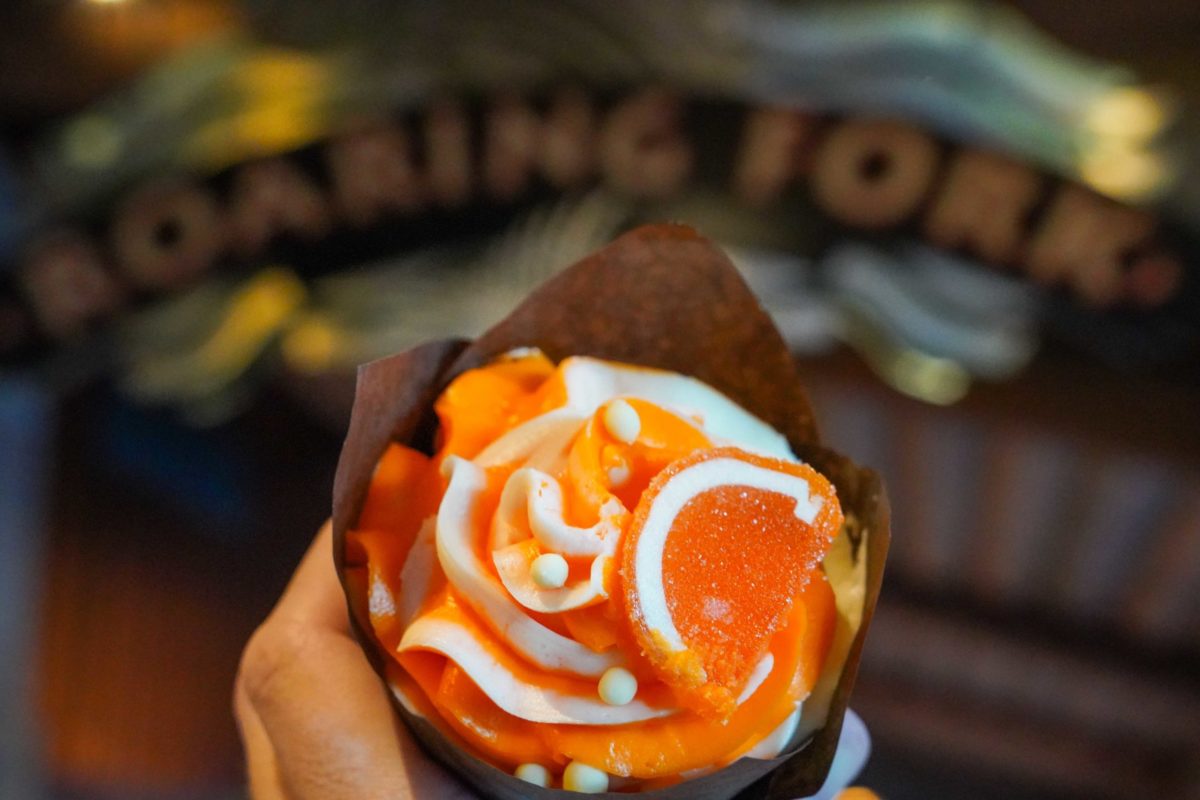 Roaring Fork is a quick-service eatery at Disney’s Wilderness Lodge at the Walt Disney World Resort. Here you can find breakfast food, sandwiches, snacks, and more. We stopped by the counter-service restaurant to try the new Creamsicle Cupcake. This citrus dessert is available via Mobile Order and is formally described as an “Orange-flavored Cupcake topped with Buttercream Icing and a Marshmallow Center with Crisp Pearls and an Orange Gummy.”

This cupcake has a nice presentation and the orange and white colors — reminiscent of a creamsicle ice cream bar — definitely pop against the dark brown lotus parchment paper.

With the cross-section, you can see the true depth of the marshmallow center. At first impression, we noted that there isn’t much marshmallow as it reaches only nearly halfway down the cupcake base. However… looks can be deceiving! The taste test is the true testament of if more filling would be needed.

The cupcake is topped with orange-flavored buttercream icing, a few crispy pearls, and an orange gummy. Unlike the cake, the icing has an extremely strong orange taste to it. On its own, the icing would be too much, but as part of a larger dish, it works to deliver the flavor. What ties the whole cupcake together is the marshmallow cream filling — and it was the perfect amount! This tasted closer to a vanilla cream than marshmallow to us, which was a good thing. The cream really served to tie together the subtlety of the cake with the punch of the icing, and then balanced it with much softer hints of orange flavoring.

Overall this is a really nice, flavorful cupcake which was executed well and delivers on its namesake Creamsicle taste.

Have you tried any of the new featured cupcakes from Walt Disney World? Let us know if this is a-peels to you as it sure is one of our favorites so far this year!

Check out some other new and returning cupcakes we found recently around the Disney Parks: