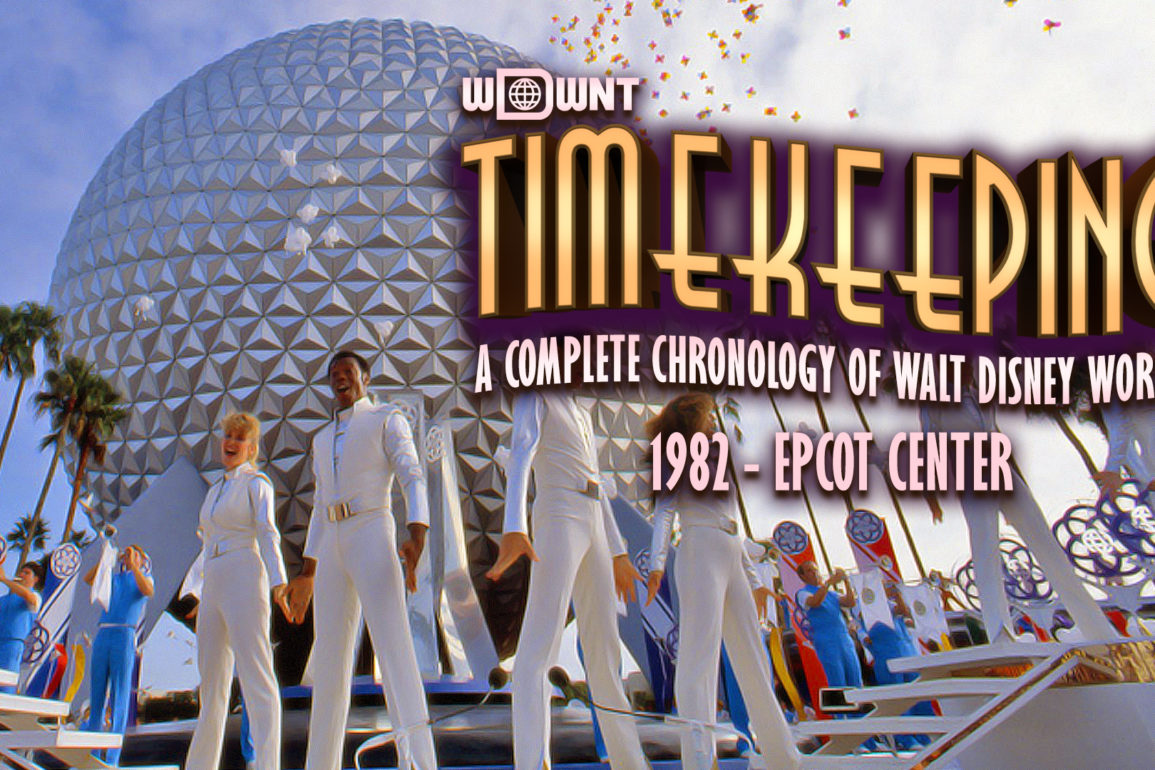 In a way, 1982 would see the final culmination of Walt Disney’s final dream, but in other’s it was a surrender of those dreams to reality. What was built would change the world and become a cultural icon, but not always in the intended way. EPCOT was not the futuristic city, but its addition changed the resort in a way that reflected a city that required new thinking in order to operate.

Things would change at the Magic Kingdom throughout the year in both preparation and response to EPCOT Center. With the park now, the EPCOT Preview Center would revert back to the Walt Disney Story. The sponsor of the Town Square Cafe would switch from Oscar Mayer to Hormel. Pepsi would lose its sponsorship of the Pecos Bill’s and the Mile Long Bar as Coca Cola would take over multiple sponsorships around the parks including Refreshment Corner and Tomorrowland Terrace. Nestle would begin to sponsor Sleepy Hollow Refreshments. Kodak would take over sponsorship of “it’s a small world”. The tent structure at the back of Fantasyland would feature character performances under the name Fantasy Faire.

The Veranda Juice Bar in Adventureland would give way to Aloha Isle, sponsored by Dole and featuring the now perennial fan favorite Dole Whips. Since ticket books were no longer needed, the booth in Fantasyland became a Kodak sponsored film and information location. Also, the Plaza Pavilion was “moved” from Main Street to Tomorrowland, at least on maps.

Admission media would switch completely to the pay one price in June 1982. The Parkhopping option as well as 4, 5 and 6 day options came in October with the opening of Epcot Center. Annual Passes also came into existence in September with the original adult price of $100.

A ticket booth structure was added at the back of the Great Ceremonial House lobby. Also at the Polynesian Village, the Luau received a bar structure, while Papeetee Bay and Tambu lounge also received refurbishments.

While not part of the resorts themselves, the EPCOT Monorail station at the Transportation and Ticket Center opened in June, providing guests with round trip tour previews of the unopened park. While no new trains would have been added after the additions of the two new six car trains Lime and Coral in 1977, most of the other cars had been extended to six cars by this point.

While the park would officially open October 1, the entire last week of September was dedicated to Cast, and construction worker, previews. Some guests were also invited to preview the new park September 28-30 along with the cast. On October 1, Richard Carson and his family were welcomed as the official first family, before Card Walker, Florida Governor Bob Graham and William Ellinghouse of AT&T unveiled the dedication plaque. While Spaceship Earth would have its formal grand opening that day, the rest of the park would have to wait for ceremonies.

Outside the park gates, you could find the Gift Stop, Package Pick Up/Lost and Found and the Kennel Club. Spaceship Earth, presented by Bell System, of course dominated the entrance plaza. Stroller and wheelchair rental were before the geosphere, and The Gateway and the Camera center were at its base on the east and west sides respectively. The original version of Spaceship did not have the Tomorrow’s Child theme song and, according to Marty Sklar, was narrated by Larry Dobkin, though Vic Perrin is still often credited. The ride exited into Earth Station, home to a guest relations area and the World Key kiosk, two way video communication and touch screen panels used for information and to make dining reservations and get other vacation help.

Immediately behind Spaceship Earth was the Fountain of Nations plaza in between Communicare East and Communicore West. Communicore East contained the TravelPort (sponsored by American Express), Epcot Computer Central (Sperry), and the Energy Exchange (Exxon). Computer Central contained the Astuter Computer Review and the robot SMRT-1. The Electronic Forum with the Future Choice Theater would open in December. The Stargate restaurant and Centorium, EPCOT Center’s main gift shop, were also on the East side. Communicore West featured a variety of exhibits and games under the FutureCom name, sponsored by Bell System. Sunrise Terrace Restaurant would open in December.

Starting in the northeast and moving clockwise around Future World we begin with the Universe of Energy (Exxon). The show began with the kinetic mosaic, also known as the Radok blocks, a moving display of rectangular sided triangles that would rotate to alter the projection of the preshow. Guests would then enter and board the moving theater cars for the multimedia presentation, including the drive through a large primeval diorama. Exxon did initially have some displays in the exit, but the main post show was considered the Energy Exchange, a large exhibit area of Communicore.

To the south, Horizons was under construction, but the World of Motion (General Motors) beaconed guests with its outdoor omnimover ramp from the first floor loading area to the main part of the attraction on the upper floor. The unique, self leveling omnimover ride went through numerous, extensive animatronic scenes, speed tunnels and a massive model city of the future, Centercore before preceding back down to drop riders into its post show area, the Transcenter. This was an extensive area with several exhibits. The Bird and Robot Show, the Water Engine Theater, the Water Engine Theater, Aerotest, Concept 2000, Dreamers Workshop and area displaying GM cars and models. Near World of Motion was the Odyssey Restaurant, a quick service eatery that also housed first aid and baby care.

On the other side of Future World sat Journey into Imagination (Kodak). The main ride would not open until 1983 due to technical difficulties, but the Imageworks play area and the 3D Magic Eye Theater were ready for guests. The theater initially housed “Magic Journeys”, a 16 minute film featuring music by the Sherman brothers and directed by Murray Lerner. The Dreamfinder and Figment were still welcoming guests out front in the gardens in front of the building.

Like today, The Land (Kraft) featured three attractions and two restaurants. The main attraction was the Listen to the Land boat ride. The Kitchen Kabaret was an audio-animatronic show extravaganza with singing fruits and vegetables, most often remembered for the infamous “Veggie, Fruit, Fruit” song.

Also on the bottom floor was the Farmer’s Market. This was set up as a series of food booths including Ice Cream, Soup and Salad, The Beverage House, Sandwiches, Cheese Shoppe, Potato Store, Barbeque and Bakery Shop. The entry floor featured The Good Turn Restaurant, a revolving sit table service location, and the Symbiosis film in the Harvest Theater.

Moving to World Showcase, nine pavilions were open on October 1st: Mexico, China, Germany, Italy, the American Adventure, Japan, France, United Kingdom and Canada. The Refreshment Port, Disney Traders, The Outpost, Port of Entry and the International Gateway were not yet built. Starting from the north entrance plaza and working clockwise, Mexico opened with the El Rio De Tiempo boat ride, the San Angel Inn, Cantina de San Angel, and the shops Plaza de los Amigos and Artesanias Mexicanas. While Norway ws not yet built, the bathrooms were there. China featured the Circle-Vison 360 film “Wonders of China.” No restaurants or shops were there on opening day, but the preshow art gallery appears to have been open.

Germany featured two restaurants, the table service Biergarten and the Sussigkeiten featuring candies and baked goods. Weinkeller, a wine shop, Glas und Porzellan, selling ceramics, Volkskunst selling clocks and wood works, Der Bucherwurm an art and book shop, and Der Teddybar a toy shop rounded out the pavilion. Italy featured L’Orinale Alfredo di Roma as its only eatery. The Italian shops included Arcats d’Artigiani, La Gemma Elegatnte, il Bel Cristallo and “I santi.” The American Adventure was pretty much the same as it was until recently with the attraction and the Liberty Inn quick service establishment. The American Gardens Theater was an open air stage offering views across the lagoon at the time.

Much of the United Kingdom would seem familiar. The Rose & Crown Pub and Dining Room was the only eatery. The Tea Caddy and the Biscuit barrel sold teas and cookies respectively. The Queen’s Table carried figurines and china, Pringle of Scotland featured Tartans, His Lordship sold tobacco and mens’ goods and The Toy Soldier was true to its name. Rounding out the World Showcase, Canada was based around the “O  Canada!” Circlevision film. Le Cellier was a buffeteria and Northwest Mercantile was the only shop.

Word Showcase also had internal transportation options. The Friendship Boats utilized docks in the same locations they are found today, and double decker Omnibuses circled the lagoon. Opening day entertainment included Mariachi Cobre and the Voices of Liberty, as well as the Olde Globe Players. The Future Corps band would come to the park in December. The first nighttime show, Carnival de Lumiere, premiered on October 23.

Like the Magic Kingdom, EPCOT Center would be open nearly a full month before the grand opening ceremony. On October 24, representatives from 23 countries joined Donn Tatum, Card Walker, Lillian Disney, Bob Graham and a 450 member band to dedicate the park and pour water from each of the representative nations into the central fountain. The other dedications were China on the 3rd, Universe of Energy on the 4th, World of Motion on the 5th, The Land on the 6th, The American Adventure and Travelport on the 11th, Canada on the 13th, Italy on the 14th, Germany on the 15th, Computer Central on the 18th, the UK on the 19th, France and Japan on the 20th, Mexico on the 21st and Journey Into Imagination on December 4th.

After almost two decades from its conception, EPCOT Center was open. Walt Disney World would never be the same, and neither would the industry. What had become the world’s largest private construction project was not finished, but it was here. The aftershocks of EPCOT are not all positive. The cost of the project, now at at least $1 billion, was a stone in a lake that would ripple throughout the company in the years to come.

Next
Dale Baer, Disney Animator for The Emperor’s New Groove, Winnie the Pooh, and The Lion King, Has Passed Away at 70